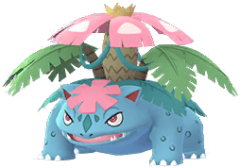 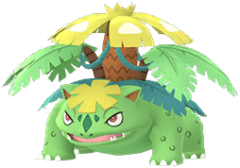 One of the first Mega Pokemon released into Pokemon Go, Mega Venusaur sets the playing field for Grass-types in the PvE meta. While it's not the most powerful Mega Pokemon in the game, it's still considerably stronger than most existing Grass-types, not to mention the boost it provides to the raid attacking party overall is highly valuable. Poison-typing unfortunately isn't as useful, and it's often better to look at other typings.

Long-term, Venusaur is probably the most future-proof of the first-wave Mega Evolutions. While it is destined to lose to Mega Sceptile in the DPS-race, it sports the highest bulk of any Grass Type Mega Evolution, meaning its Mega Boost will last substantially longer if played correctly. This alone makes Mega Venusaur potentially superior in larger raid groups, where its competitive DPS and long-term boost may situationally outpace the performance of Mega Sceptile.

Vine Whip is the preferred fast move for Venusaur due to greater energy generation, which allows Venusaur to take advantage of its powerful charge moves. Razor Leaf is a more polarizing fast move that focuses on dealing damage without requiring energy or being denied by shields, though its slow energy generation causes Venusaur to lose some neutral matchups.

Frenzy Plant is the main selling feature of Venusaur, with an insane 2.22 DPE (Damage Per Energy) and moderate energy cost. If you don't have access to Frenzy Plant, consider Ivysaur with Power Whip instead. Sludge Bomb is a nice STAB coverage move that also gives it an advantage against other Grass-type picks.

Ice Pig problem
I got a 14-14-15 shadow ice pig but I have limited candy. Do I purify? 9…
What a day
Anybody else in? That was great! Better than the last 38 community days. A new…
Bottle Caps/Rocket Gas
So on the topic of bottle caps… As this IV improving mechanic was introduced in…
Xerneas is the worst legendary ever in GO and both GF and Niantic are there to blame
I don’t know about this. But thanks for ruining a COVER LEGENDARY by making a…
Announcement of Pokemon go pokedex webapp
Hi! I just created a pokemon go control pokedex web app and want to share it with the…
Read More