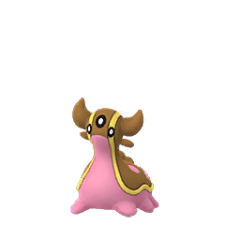 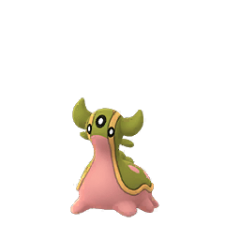 On April 30, 2019 Niantic released both variations of Shellos into the wild, probably by accident, and then quickly disabled their spawns. A few weeks later on May 17, 2019, Shellos was officially released into the game and Gastrodon no longer was one of the rarest Pokemon. For all this craze and excitement, Gastrodon unfortunately is somewhat of a disappointment for PvE, as it doesn't have the stats needed to perform as well as other options. It could be an okay gym defender, but easily loses to Grass-type attackers.

Hidden Power and Mud Slap have identical stats for PvP, but the former has the potential of offering random coverage that can take the opponent by surprise. Of the 16 possibilities of Hidden Power, consider a typing that can cover Gastrodon's only weakness to Grass-type opponents. It should be noted that if you end up with an unfavorable Hidden Power typing, Mud Slap can perform better since it has STAB.

Body Slam is Gastrodon's cheapest charge move energy-wise and can be used to bait shields and apply pressure. Earth Power takes advantage of STAB to deal big damage if unresisted. Water Pulse is underwhelming in PvP due to its low 1.17 DPE (Damage Per Energy) and expensive 60 energy cost. The legacy Earthquake is Gastrodon's most powerful move, but not only does it require more energy than Earth Power, but it's also incredibly rare due to its removal right before the official release of Shellos and Gastrodon.

Gastrodon is an interesting candidate for Great League, and takes advantage of its typing to avoid vulnerabilities to everything except Grass. A high stamina stat gives Gastrodon good bulk, and a wild card Hidden Power moveset can possibly catch opponents by surprise. Unfortunately even the randomness of Hidden Power isn't enough to carry Gastrodon to the top ranks, as the slow energy generation from either of its fast moves limits its use of its stronger charge moves. Overall a decently bulky pick that abuses Ground-type weaknesses, and almost has enough bulk to tie with Cresselia.

Gastrodon has more issues in Ultra League, and a max CP of only 2324 is one of them. The increased presence of powerful Dragons and bulkier Psychic-types doesn't give Gastrodon much breathing room, and our colorful slug finds itself with a lower rating in Ultra League. Ground-type attacks rewards wins against the common Steel-types in this league, but unfortunately it doesn't get too much better.