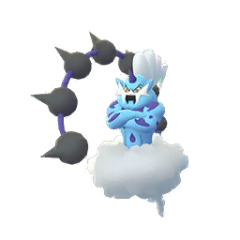 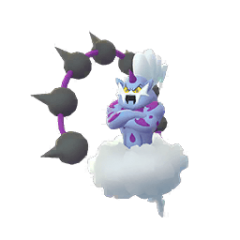 Thundurus - Incarnate Forme had the potential to be decent, but lost the move lottery like so many before it. It currently sits behind all of the major Electric attackers in the game, and is basically a worse Zapdos even in cases where Zapdos is stuck with Charge Beam. Better to save your Thundurus candy for its Therian Forme.

Brick Break or Thunder Punch can be chosen for their cheap energy cost, which lets them be used frequently. The former offers coverage against weaknesses to Rock and Ice-types, in addition to popular Steel-types in various formats, while the latter benefits from STAB. Thunder gains STAB and can deal huge amounts of damage if unshielded, though its 60 energy cost is a bit high. Crunch is generally not recommended, but its unique coverage and well-rounded stats can be useful in certain formats.

Thundurus currently can not be obtained through Research Breakthroughs, which disqualifies its eligibility into Great League due to its high CP.

Thundurus is a Flying/Electric Pokemon with a very high ATK stat, relatively poor bulk, and an unusual but versatile moveset for Ultra League. While Electric-types typically are not very popular due to the dominance of Giratina, access to Crunch gives Thundurus a chance to nail Giratina for Super Effective damage, though this is not enough to beat it on an even playing field. It does however, also provide coverage against meta Psychic-types, in addition to relatively neutral coverage for when Thundurus's Electric-type moves would be resisted. Thunder Punch + Thunder is necessary to beat Registeel outside of the 1-shield matchup, however this sacrifices any form of coverage. Overall Thundurus is somewhat risky to use due to its poor bulk, however a slight energy advantage can flip numerous matchups if given the opportunity.

Thundurus Incarnate Forme falls behind its Therian Forme with regards to stats, in particular the ATK stat. The lack of an efficient moveset also holds it back from winning against various meta Pokemon in this league. To add more insult to injury, Thundurus doesn't have many solid options against the various Dragon-types that dominate this league. Perhaps give a pass on this guy, and at the very least consider its stronger Therian Forme once its released.

Thundurus and its Place in the Meta