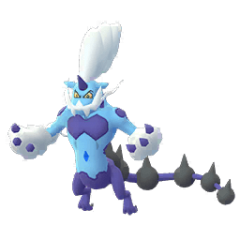 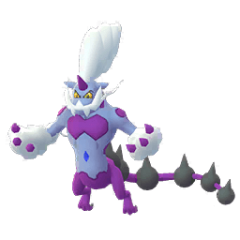 Thundurus Therian Forme boasts considerably more ATK than its Incarnate variant, and combined with a stronger PvE moveset, is a great Electric-type attacker for raids and gyms. Unfortunately its poor DEF and STA stats causes it to faint rather quickly compared other attackers, and its Flying sub-typing can sometimes be a liability against Ice-type attacks that Water Pokemon typically have.

Thunderbolt demands the least amount of energy among Thundurus's charge moves, and benefits from STAB. Thunder is slightly more efficient and slightly more costly, but Thundurus desperately needs cheap charge move options and every bit of energy matters. Sludge Wave doesn't synergize well for an Electric/Flying Pokemon, and requires a lot of energy to use. Focus Blast is recommended for its wide coverage, but while it does demand the most amount of energy, other options don't provide as much value for their costs.

Thundurus Therian Forme is not eligible for Great League due to its CP being too high. If it were to be obtained from other methods in the future, then it might have a chance to compete in this league.

Thundurus Therian Forme sports a very high ATK stat and troubling fragile bulk comparable to that of Gengar's. A moveset change right before its release into the game consequently made it worse for PvP due to more cumbersome and costly charge moves. Access to Thunderbolt as the fastest charge move option instead of the faster Thunder Punch, Break Break, or even Crunch is a major setback that makes Thundurus too slow to compete against most meta Pokemon. As a result Thundurus is outclassed by various other Electric-types with much faster movesets.

Thundurus Therian Forme has generally greater stats than its Incarnate Forme, gaining 29 base ATK stats while losing only 3 base DEF stats. Unfortunately the Therian Forme's charge moves are way less preferable and much slower, causing its performance to drop significantly despite its superior stats. Losses and/or struggles against both Togekiss and Kyogre in multiple even-shielding scenarios despite benefiting from a Super Effective multiplier questions Thundurus's role. The ubiquitous use of popular Dragon-types who resist Electric-type damage also discourages Thundurus from seeing any significant play.