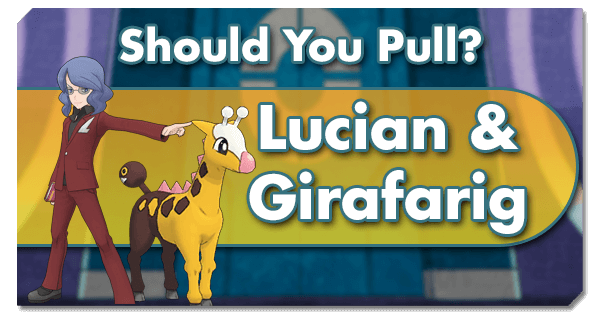 A Sync Nuker with a focus on strong Move Gauge management and valuable stat-drops.

The final member of the Sinnoh Elite 4 has made his way to Pasio, finishing off the quartet with his own Psychic Type prowess. At his side stands Girafarig, the second palindrome Pokemon to be featured in recent weeks, as well as the fourth to date. Together, they’re here to make life hard on anyone that they may face with their Tech skills, and finally give us access to the Sinnoh variant of the Champion’s Arena.

Lucian & Girafarig have high Special Attack and fairly middling Speed. Their bulk is also fairly middling, so don’t expect them to survive too long once the designated tank drops. Their moves start out with Confusion, which is… Confusion. One bar, low damage, low chance to Confuse; nothing particularly special. This follows up with Growl, which drops the entire enemy team’s Attack by 1 with each use. X Sp. Attack is next, and it’s the same run-of-the-mill +2 Special Attack with 2 MP item that we’ve seen many times. And, finally, Read It and Weep! finishes off the moves, and is a 2-use trainer move that grants +2 Critical Rate, +1 Defense, +1 Special Defense, and the Gradual Healing effect on use.

Moving on to passive Skills, we start with Stupefy 9, which drops the opposition’s Special Defense by 1 any time Girafarig uses Confusion or, more importantly, Growl. This effectively gives Growl an AoE Special Defense drop on every use. Team Viral Hustle adds even more utility to Growl, as it raises the entire team’s Speed by 1 with every use. Finally, Pecking Order increases Sync Move damage the more that the target’s Attack has been dropped, giving even more utility to Growl.

Dropping the opposing team’s Defensive stats has always been pretty valuable, and reliable AoE Special Defense drops in particular are very rare. This effect alone gives Lucian & Girafarig potential to sit alongside strong Special Striker/Support cores that have some leeway for their third slot. And speaking of valuable, Speed buffs are also great for just about any team, making them worth considering on that front as well. And that’s not the end of it, because a properly setup Sync Move from Lucian & Girafarig is surprisingly strong, almost always mutilating whatever enemy may be on the wrong end of it, if not outright scoring a KO.

And now we have to switch gears, because we’ve got to look at Lucian & Girafarig’s shortcomings. To start with, they have absolutely no direct offensive presence outside of Sync Moves. Even when fully Grid-invested, Confusion is “supplementary” at best, and can’t do much to help end battles faster than they would end anyway, meaning they almost need to be paired with something that can hit a bit harder than they can. They’re also pretty slow at their job, only dropping 1 Attack and 1 Special Defense while boosting 1 Speed per use of Growl. Under normal circumstances, most battles will be well into their second Sync Move cycle at the very least before Lucian & Girafarig finish their job. And this isn’t even mentioning the fact that almost every stage in the game packs some level of Trained Mind, if not Stalwart, meaning their actual effectiveness on that front can be pretty lackluster depending on the stage.

If you ever have a strong Special Attacker/Support core that doesn’t really need a 3rd to excel, Lucian & Girafarig can come in and provide their own brand of support. They’re also solid on their own merit, but will likely require some offensive help on that front.

Depending on the stage and team, Lucian & Girafarig have the potential to help the team both defensively and offensively, and can also score very powerful single-target Sync Moves, meaning they can fit into specific stages very effectively.

Not the best choice, but they can fill a hole with a bit of additional damage support and/or Sync Move damage where needed.

They won’t be dealing much damage in most cases, but Lucian & Girafarig can offer some valuable buffs and debuffs without using MP. It can just be a bit hard to fit them onto an effective Villa team.

⅕ gives little beyond the cohesive and solid functionality that Lucian & Girafarig’s base kit brings to the table. At base power, Lucian & Girafarig only really debuff the opposing team, buff their team’s Speed, and drop strong Sync Moves, and their grid does very little to support that at this level. The main loss is Sync Move damage, as a ⅕ Sync Move only has roughly 60% of the damage of ⅗. Meanwhile, ⅖ is where around 80% of their Sync Move damage comes in, missing only a few Power+25 tiles come into play.

In the end, Lucian & Girafarig are perfectly fine on the utility side at ⅕, but ⅖ is the minimum for strong Sync Move performance.

EXing Lucian & Girafarig really only matters if you want to make a Sync build, as the 1.5x damage boost is definitely significant. However, they aren’t exactly high-priority in general, so it’s only worth the investment if you really feel that they shore up a weakness on your team.

Critical Strike 2 is the natural choice for any Sync-centric build due to its high and reasonable damage boost. From the Deluxe pool, Super Powered 3 is a fine choice if you intend to focus strictly on Super Effective stages.

For a more supportive set, the options are a bit more limited. Skills like Mind Games 2 or Defense Crush 2 may seem like good options for getting the job done faster, but they only take effect with attacks, so they don’t work with Growl. To that end, Head Start 1 or Adrenaline 1 are probably the best overall choices, as moving along to the next Sync Move is always important.

Beyond that, Lucian & Girafarig do fill the rare niche of dropping the opposing team’s Special Defense. They’re pretty slow at doing so, but it’s still rare enough to give them reason to occupy a 3rd slot in the absence of other choices. Special attackers like Sygna Suit Cynthia & Kommo-o, Alder & Volcarona, and Diantha & Gardevoir can all benefit from the additional damage that this pairing will bring. Slower Sync Pairs like Raihan & Duraludon or Lance & Gyarados can compound the damage-bonuses by taking advantage of the Speed buffs that can help with their otherwise potentially sluggish move gauge management. Sync Pairs that prey on the stat-drops that Lucian & Girafarig bring to the field, like Champion Iris & Hydreigon, will also enjoy even more utility from this pairing.

When it comes to providing support for Lucian & Girafarig, their main desire is some help buffing Special Attack. A plethora of Sync Pairs like Sabrina & Alakazam or Sygna Suit Elesa & Rotom can easily fill this role and give a basis for a strong Sync Nuke setup. Going a bit deeper, the Super Effective Up Next effect supplied by Red & Snorlax can also be very valuable for boosting Sync Move damage, and is worth considering for sure.

Lucian & Girafarig are decent enough, but they’re unlikely to be one of your star Sync Pairs. Their debuffing capabilities are pretty valuable, but racking up those debuffs is pretty slow, and that aside their only real offensive presence is with Sync Moves. Still, many will look to Lucian & Girafarig for their ability to score AoE Special Defense drops, and that’s definitely a worthwhile reason to use them on your team. Just note that while they do have several attractive benefits, they also have some fairly steep competition right now, it might be best to consider just how valuable they’re likely to be to you before making an investment.