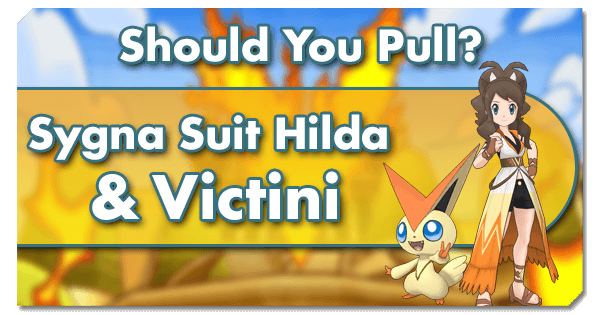 A Striker that has a single turn setup and incredible damage, with also the advantage of not having any clear weakness that truly would hold back a Sync Pair like this.

The only big competition to SS Hilda at the time will be SS Hilbert. Hilda is a more powerful off-type pair, but is on a very populated type (if not the most populated), which might hold her back for those looking for coverage rather than strong neutral Sync Pairs.

The female protagonist of the first pair of Unova games, Hilda’s history hasn’t been the best in PM. Taking the role of NPC version of the character in the original games and focusing on the Battle Subway, Hilda hasn’t been strongly featured on Unova’s big story events, and despite having 3 different Sync Pairs at this point (with one of them being fairly recent), they all ended up just being average. Now, with the Unova Villain Arc, Hilda once again gets a chance to show what she’s capable of, this time with Victini, the Victory Pokémon. Although Fire is a very stacked type, will they be able to surprise us with their power? Let’s find out!.

SS Hilda starts with polarizing stats: 502 offenses with 376 Speed are fantastic offensive stats, especially as they don’t need a transformation, but 592 HP and 122 on both defenses are atrocious stats, comparable to some of our frailest units, like Nate & Braviary. Overall, offenses are still the most important part of a Striker, so Hilda wins the trade-off here. Her moves include Confusion, a 1 gauge move with 10% chance to confuse the enemy, Searing Shot, the first of Victini’s signature moves, being an AoE special 4 gauges Fire-type move that has 30% chance of burning the target (although reduced to 15% when AoE), and V-Create, the second signature at a whooping 200 BP doing physical damage, but at the cost of lowering the user’s Defense, Special Defense, and Speed by 1 stage when it’s used. The Trainer Move is For the Win!, increasing the user’s crit by 3, accuracy by 1, and Special Attack by the same amount of boosts that it has for Attack.

As you have noticed, the Trainer Move doesn’t buff Attack, so that’s where Fierce Entry 6 comes in, giving SS Hilda maxed offenses after just a single turn. Recharging Strike 9 will give one gauge back to the user when it attacks, helping with gauge, and the last passive is Downside Up, not only completely negating V-Create’s negative effects, but actually turning them into positive boosts! This is particularly great at helping Hilda’s defensive issues and just dealing with enemy debuffs in general.

As we can see, SS Hilda’s base kit is absurd. Just from the base, we can see similarities to SS Red but actually better, seeing as she gets a faster setup, buffs her defenses rather than lower it, and V-Create is more powerful than Blast Burn, even if her gauge is inferior. With grid, Hilda will also be capable of Sync nuking, creating a Striker that is strong in all relevant areas and could easily be used anywhere.

Although she comes with a 5/5 grid available, SS Hilda luckily has most of her important things offered to her at ⅗. As the most important node, Rising Tide deserves the first mention, giving SS Hilda a top tier Strike nuke and being very easy to max out between her Trainer Move and V-Create. Playing off that, multiple Sync +25 nodes are also a strong option for a boost to your Sync Move without any condition attached. Scorching Sync 5 can be used for a full power Sync Move, but the damage difference from multiple Sync +25 isn’t big and the condition is not the best.

Confusion: Aggravation 9 is a niche node for Legendary Arenas or can be used to enable Confusion Synergy 2, although there are better options. Trainer Move: Empowering Command 9 gives SS Hilda a +1 Physical Move Up Next after her Trainer Move, but is mainly used once get the path with the ⅘ and 5/5 nodes like Trainer Move: Propulsion 9, which can help accelerate Sync coutdown. Finally, Hostile Enviroment 3 and Sundering Burn 9 will give SS Hilda more utility rather than just damage, and could be used on their own build. All in all, both ⅕ and ⅗ are good spots to stop, although going further can still have small benefits.

If you got ⅗ SS Hilda, EX is strongly recommended. Having a very powerful Sync Move and single target DPS, it’s very easy to make use of such an upgrade on top of helping her low base defenses, although it won’t help much if you aren’t able to get Rising Tide at your current Move Level.

As usual, Critical Strike 2 and Weathered Warrior 3 are the recommended Lucky Skills for a weather Striker, opting for either more universal use or more raw power under optimal circumstances. Other options aren’t really worth considering.

SS Hilda is excellent in almost every game mode. 3v3 modes like Champion Stadium will fall to her combination of V-Create ad Sync Nuke, especially with her quick setup, while Extreme Battles will also work out very well for her when she’s the boosted unit - when off-region, she can be used for some utility between Propulsion 9, burn, and Sundering Burn debuffs, although this a more specific application and might have better alternatives.

For Legendary Gauntlet, full self-sufficiency and high damage would already make her a valuable asset to have, but capacity for burn utility and self buffing defenses and Speed makes for an even more standout pair that has strong gauge and can be pretty durable.

The only mode that SS Hilda is not totally reliant on herself is Battle Villa, although Fierce Entry 6 can have interesting uses with consistent crit support, like Red & Snorlax.

A classic for Fire strikers at this point, Sygna Suit Morty & Ho-Oh will be a great choice for summoning sun and supporting your third unit as well as providing gauge. For offensive choices, Sygna Suit May & Mega Blaziken has great synergy with SS Hilda with her Defense drops and Sync Acceleration, while Leon & Charizard will also provide Sync Acceleration to a smaller extent and can burn the opponents to make use of SS Hilda’s passives.

Silver & Ho-Oh and Sygna Suit Red & Mega Charizard X are also good budget options, with Silver also providing sun himself via Solarize and being capable of spreading burns with Sacred Fire. Evelyn & Entei work solid defensively, can burn, and also have Fire Teamwork to boost SS Hilda’s damage. Sygna Suit Erika & Leafeon and Blaine & Rapidash are capable of summoning sun on-demand and are cheaper options than SS Morty, although inferior to him due to their synergy with SS Hilda.

Red & Snorlax and Raihan (Anniversary 2022) & Flygon can both provide Sync Acceleration and Super Effective Up Next for SS Hilda, with Raihan also having Max Flare available. Gordie & Coalossal, although not having many tools available, for sure have valuable ones, providing Sync Acceleration, Sun, and Fire Rebuff. Finally, Sygna Suit Hilbert & Genesect can work specifically if the opponents are weak to Fire, as they can not only provide high DPS, but also apply the Fire Rebuff effect to the opponent, helping SS Hilda’s damage.

By herself, yes, SS Hilda is worth it, being probably a top 5 damage dealer in the game. However, what you may consider to oppose it is the competition - even if she is the best of them, Fire is not a type that was in need of help, featuring plenty of strong Sync Pairs like SS Red, Silver, Leon, and SS May, with some even being F2P friendly. If you just want an off-type beatstick however, no question, SS Hilda will be an excellent choice for you.