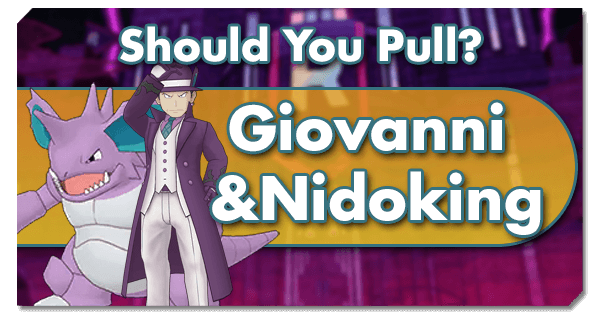 A top damage dealer with three types as coverage, fast setup, and Dynamax.

After his debut as the first Legendary Event Sync Pair in the game and returning to the spotlight as the first character to get a Power Boost in the game, Giovanni gets his long-waited alt with a brand new Sygna Suit, pairing with a Dynamax Nidoking. Having received quite the hype from the playerbase as a Ground-, Steel-, and Poison-type striker in one pack, how does he fare with the rest of the units available? Let’s find out!

Starting with his stats, Nidoking doesn’t impress at first glance. While an Attack stat of 375 is not bad, there’s quite a few strikers with above 400 on their offenses at this point. 295 Speed with no Speed buffs already makes a good gauge support mandatory for him, and a 633/133/133 bulk also turns Sygna Suit Giovanni into one of the naturally frailest strikers available. Due to how the passives interact with Sugna Suit Giovanni & Nidoking’s moveset, let’s look at them first: Giovanni’s Cunning is a new, exclusive passive that includes the effects of both Ground Shift and Piercing Gaze, which is great for avoiding the need of accuracy support and dealing with evasion boosting stages. MAX Double Down 5 will give an additional multiplier to super effective Max Moves, and due to their naturally high base power, it’ll be very hard for enemies weak to them to be able to tank them. Finally, Hit the Gas 5 will turn all of Giovanni’s 3 gauge moves into 4 gauge ones and raise their BP.

For moves, Sygna Suit Giovanni starts with Mega Kick; an inaccurate, Normal-type move. Those two factors both greatly increase the power of moves, and when combined with Hit the Gas 5, we get a whooping 250 BP at ⅕! And, of course, Giovanni’s Cunning will also turn this from Normal-type to a Ground-type move and fix its low accuracy too. Next, Iron Tail turns into a 198 BP move, pretty much matching the Base Power of Steel Beam while keeping a 30% chance to drop Defense. Finally, Poison Jab has its BP raised to 138 - actually pretty underwhelming for a 4 gauge move, but this is still the strongest Poison-type move for now. His Trainer Move is World of Pain!, raising the user’s Attack by 6 stat ranks and applying the Critical Hit Next and Super Effective Up Next effects to the user on use, which is pretty good.

Generally, Giovanni is obviously geared towards super effective damage, being either the best or one of the best strikers for 3 different types - however, his solid damage, even off-type alongside a Max Move nuke, can make him usable for most stages. A fast self buff Trainer Move and the possibility of even skipping crit support with grid also makes him relatively self sufficient, although heavy gauge support is mandatory for him.

In this mode, Giovanni can make use of his high damage and fast setup to quickly start weakening the enemy. Coupled with Dynamax, this should also allow for some turn skips if played carefully. Giovanni can also make use of his AoE Sync Nuke if he’s EX - however, do keep in mind the damage is relatively underwhelming compared to the usual strikers of his caliber.

On Legendary Arena, Giovanni’s good self buffs could make him a good choice by being capable of skipping offensive support outside of Speed. Iron Tail’s Defense drops can also be used for those longer battles. Max Moves are probably the biggest draw here, as they’re capable of ignoring most defensive passives, such as Healthy Advantage and Acute Senses.

Giovanni is a strong Ground-type and a Johto unit, both being possible stage boosts that are rare to find on the roster of most players.

Sygna Suit Giovanni is very gauge expensive and doesn’t have a way to buff himself without using MP, making him largely forgettable outside of Max Moves being usable in every battle.

Sygna Suit Giovanni has a solid base kit and benefits from each dupe - the main benchmarks to look at are his multipliers from ⅖ and Critical Crit 9 at ⅗. SS Giovanni has a “just good enough” Sync Move if you want the EX, but the benefits are arguably mainly from the stats.

Critical Strike 2 is the best choice here, no question. One could consider Weathered Warrior 3 or even Super Powered 3, but not only those two have more limited activation requirements, they also don’t work on Max Moves, unlike Critical Strike 2.

Ideally, Sygna Suit Giovanni appears on sand teams. Ingo & Excadrill fixes all of his problems, giving him sandstorm for Surging Sand 2, critical hit rate buffs, and immense gauge support. Anniversary Raihan & Flygon can also be used instead for stacking Physical Move Up Next and go with a series of nuclear moves between stacked DPS and a Max Move. Palentines Marnie & Mawile can be used to drop defenses and summon Steel Zone, as a Steel Zone Iron Tail hits harder than a Mega Kick. Other Sand strikers, such as Emmet & Archeops or Raihan & Duraludon, can also be used for a dual striker composition.

Maxie & Groudon can be used as a dual Ground core, with both sun and sand being useful for the team (as Hoenn Pride essentially covers for Surging Sand 2) - if Sun is chosen, Sygna Suit Morty & Ho-oh is an excellent support choice. Red & Snorlax can be used for Poison Jab builds for crit buffs and Super Effective Up, as that move shouldn’t be used on off-type scenarios.

As a very strong Striker for 3 different types, SS Giovanni makes his presence known by being a valuable addition to any roster, regardless of on-type or off-type scenarios. If you’re lacking for any of those or just want a hard hitting unit with fast setup, Sygna Suit Giovanni is for sure a worthy pull for you.