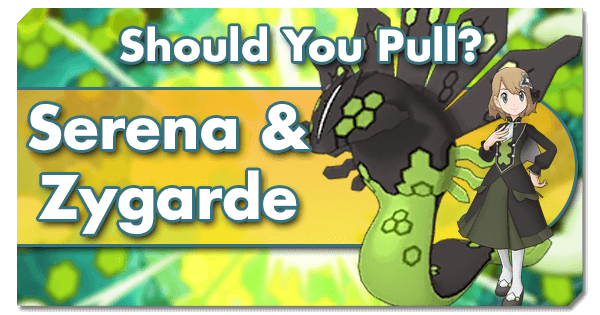 A Sync Pair with unprecedented offensive capabilities, no other character currently in the game can rival Sygna Suit Serena & Zygarde’s sheer power!

After debuting in the game as the first AoE sleeper user with Delphox and being one of the faces of the Hybrid units with Whimsicott’s offensive and supportive power, Serena is back again rocking her new Sygna Suit with the guardian of the ecosystem, Zygarde, and she’s ready to become one of the faces of the metagame for a third time!

In a lot of ways, Sygna Suit Serena & Zygarde and Sygna Suit Lusamine & Necrozma are similar. First, their stats might look pretty good, but not out of this world, with very high Atk and Sp Atk, good Speed, and a very lacking bulk, but there’s a catch: like Ultra Burst, Zygarde’s Power Construct gives a 1.2x multiplier to all of their stats, making their offenses skyrocket (in fact, they match Sygna Suit Red’s Atk and Sp Atk), getting a very high Speed, and making their bulk a lot more acceptable.

Zygarde’s moveset consists of Thousand Waves, an AoE physical 4 gauge Ground-type move with relatively low BP for what we’re used to see for such cost that restrains the opponent, which doesn’t do much by itself, but helps SS Serena achieve her full power like we’ll see later – Thousand Waves is also a pretty strong option by itself to simply cause Ground damage too. Their other option is Core Enforcer, an AoE special 4 gauge Dragon-type move with 160 BP and no secondary effects. The fact that it’s a Dragon move means it can make use of Lucas’ Dragon Zone and get that 50% multiplier right off the bat, which is great. SS Serena’s item of choice is the famous Dire Hit + - pretty standard for Strikers, being capable of maxing crit by herself is always a welcome addition. Finally, her Trainer Move is called Feel Our Feelings!, which has 1 MP and uses 2 gauges, but gives Zygarde +6 Attack, +6 Special Attack, and Gradual Healing. This is extremely potent, as it gives SS Serena instant setup despite the fact that she’s a mixed attacker (which tends to lack support options) alongside helping her longevity with the regeneration, with the gauge cost being a pretty minor drawback. Their Sync Move is called Ecosystem Core Enforcer, and similarly to Necrozma, it keeps its 300 BP despite being a transformation Sync Move.

Their passive skills start with Kalos Flag Bearer – SS Serena is a Master Sync Pair, so she gets the benefit of boosting the entire team’s offenses and defenses. Kalos is not a particularly powerful region, but there are some units that can be used with it due to SS Serena not relying too much on other characters. The damage reduction in particular is very appreciated, as SS Serena goes from apparently a frail unit with Zygarde’s stats on 50% to one of the bulkiest strikers after the Complete transformation and the damage reduction from the Master Passive, taking hits about as well as Anniversary Lillie & Lunala. Next, we have Strong Start 1, which gives Serena 1 stage of Special Move Up Next and Physical Move Up Next on entry, allowing her to open the battle with a free damage boost for both Thousand Waves and Core Enforcer. Following up is Head Start 1, giving Serena -1 Sync countdown on entry. While this may not be very useful on its own, it allows Serena to participate on sync ramping comps with some specific units. Finally, we have Restraining Sync-Up 5, a 50% multiplier to their Sync Move when the target is restrained, which is where Thousand Waves mainly comes into play. However, that’s not all: once Zygarde transforms into its Complete form, it also transforms all of its 3 main passives too. First, it unlocks Piercing Gaze, making them incapable of missing. While they don’t have any inaccurate moves to begin with, this may prove useful against opponents that boost their own evasion. The second new passive is Impervious, making them immune to stat drops. This is especially useful on Legendary Arenas, where opponents tend to debuff your offenses or defenses, and sometimes even both. Finally, the true selling point of their kit is Power Hold 5. On top of maintaining the same effect as Restraining Sync-Up 5, it also doubles down as a 50% multiplier to their moves when the enemy is restrained. This makes Core Enforcer in particular reach obscene levels of damage where no other Striker really has arrived before, or at least not with such ease and reliability like SS Serena does.

So, for pros, SS Serena has good gauge, is very self-sufficient, can take hits well for a Striker, powers up the entire team with her Master Passive, and outputs the most damage overall in the entire game as a single unit. Those are very strong selling points, but so are her cons, which are… almost none. In theory, you could argue she needs restrain to get her multipliers, but she does it herself with a move that hits hard, AoE, and is guaranteed to apply it; you could say she wants to take the first sync from other units, but Serena has one of the best Sync Moves in the game (some might even say the best); you could say she’s limited to AoE attacks, but not only is her AoE DPS very much comparable to quite a few units while they hit a single target, her Sync Move is so powerful that often sides will just fall for it before she even clicks Core Enforcer.

SS Serena is almost a cheat code here. A Sync Nuke that gets sure crit, AoE, is easy to set up and leaves even Sygna Suit Red’s Sync Nuke behind means that she can clear any stage regardless of type advantage or not extremely easily with minimal support.

This is another mode where SS Serena shines. Her full self-sufficiency and bulk is put to test here, where she’s able to take more hits than most other damage dealers in the game without the need to waste any super valuable Support. Rejuvenate 6 also shine as a gauge generation machine. Finally, she has a lot of tools to deal with multiple gimmicks despite her lack of Piercing Blows: SS Serena can inflict a status change with Restrain, she can get immunity to status, she can deal both physical and special damage, she’s immune to stat drops, and she doesn’t care about evasion buffs. Her damage also really shows here, with often only one opponent appearing, a Zoneless Serena is capable of out-damaging even Strikers under their respective weather, Terrain, or Zone.

SS Serena has the Kalos Theme Skills, a region that’s generally lacking in strong units outside of Professor Sycamore and Special Costume Diantha. Like mentioned previously, Serena also has multiple tools to deal with possible gimmicks a stage can have, but she shouldn’t be used if she doesn’t get the stat boost for the stage.

Probably SS Serena’s weakest mode, Serena can only use 4 gauge moves, which might be annoying. For boss halls, having to do one attack every time where the opponent isn’t restrained when a new Pokémon comes out isn’t ideal either. However, her screen clearing Sync Nuke with Soften Up might prove useful as a tool for dealing with filler halls.

These are the spotlights of Serena’s grid:

Next, we have tiles that are good to have, but are not as key to her main uses or might be out of the way for other more important nodes:

Critical Strike 2 is the obvious option here due to SS Serena’s nature as an offensive unit that doesn’t really tend to be used under weather to make use of Weathered Warrior 3.

As a self sufficient Dragon-type Damage Dealer, SS Serena’s main partner in crime is obvious: Lucas & Dialga are able to summon Dragon Zone and do a good amount of damage by themselves, with the bonus of being very self-sufficient too. This opens up the support slot considerably, with Dawn & Cresselia and Red & Snorlax being the standouts. They both can take advantage of Serena’s Head Start 1 to get an early sync and are capable of tanking, with SS Dawn having a better gauge with her acceleration and Red being capable of giving super effective up and heal the others without taking the Sync to himself.

Evelyn & Entei have a distinction compared to other supports because not only they have the Kalos Theme Skill, but also are a Master by themselves. As such, Evelyn achieves a 30% Master Passive damage boost in total while also making the team extremely tanky with the combined Master Passives and the boosts she gives to defenses. Diantha & Keldeo is another Kalos option that can help offensively by giving defense drops, tanking, and offering some gauge. Finally, Maxie & Groudon work very well with SS Serena if you plan on doing Ground-type damage, with both offering huge DPS and helping each other with their Master Passives.

If you lack any of the supports mentioned, don’t worry: SS Serena’s self buffs are so good that even free gauge supports are good, so Skyla & Swanna or Player & Cobalion are very valid as well.

After all of those qualities mentioned, the answer couldn’t be anything other than yes. Sygna Suit Serena redefines what being a Top Tier Damage Dealer means and works extremely well in the current environment of the game that focuses on Master Mode and the Legendary Gauntlet. Even if you do have multiple Dragon strikers on your arsenal, Serena will still provide the rare Ground damage and has an off-type performance that can beat even great on-type Strikers – seeing SS Serena being the best unit to beat a stage that’s not Dragon or Ground weak will be a common thing for multiple players.