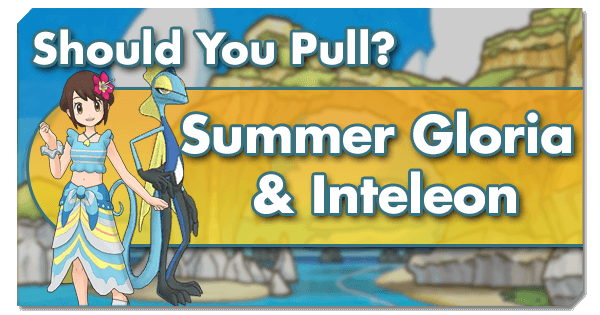 An unorthodox Striker that’s virtually designed to work in the role of a secondary Attacker.

Well, we now know that Gloria chose Inteleon as her partner Pokemon, so this probably means that Hop has Cinderace? Either way, Gloria & Inteleon are… different. They’re a Striker Sync Pair, but they’re not really designed to be the primary attacker. Instead, they want to hide in the corner and snipe down anything that the main attacker misses. Despite having a 4-gauge move in Snipe Shot, their skills make them well suited for the role of a secondary attacker. The first reason for this is Critical Freebie 4, which has a 50% chance of granting the Free Move Next effect to Inteleon any time it scores a Critical hit. So how do we ensure a Critical hit with Inteleon? The main way is via Gloria’s trainer move; Scope ‘Em Out! This 1-MP move raises Special Attack and Speed by 1 each, and applies the Critical Hit Next and Super Effective Damage Up Next effects to Inteleon on use. Pretty lackluster on a 1-use skill, right? Well, not quite. If we go back to Gloria & Inteleon’s skills, we’ll see something very interesting; Critical Refresh 9. This skill grants a 100% chance to restore 1 MP every time Inteleon scores a Critical Hit. In short, it’s possible to “load up” with Gloria’s trainer move, score a boosted sure-crit (and possibly get Free Hit next!), and then load up with the trainer move again. Rinse and repeat for victory, or just ignore this mechanic for the most part and bring some Critical Rate support along for the ride!

So what other moves do Gloria & Inteleon have? Well, Dark Pulse and Air Slash. Nothing that we haven’t seen before, and nothing particularly impressive for the most part. Air Slash is virtually useless, sporting low damage and an “okay” flinch rate, but it is the cheapest move in Inteleon’s arsenal… an arsenal that leans into the Free Move Next effect fairly heavily.  Dark Pulse, meanwhile, is actually a very interesting option. While it’s not going to win any awards for damage in the majority of cases, Gloria & Inteleon’s grid has a tile that can raise the Flinch rate of Dark Pulse to a staggering 40% on a Critical Hit, making it a fairly appealing choice for using Gloria & Inteleon as something closer to a Tech unit.  Another advantage worth mentioning with Gloria & Intelleon is their Sync Nuking capabilities. Given their ability to secure Sure Crit and Super Effective Up boosts basically at will, their innate Critical Strike 3 skill, their access to the Critastrophe 2 tile on their grid, and their EX form’s AoE Sync Move, they can hit decently hard, adding more value to their role as a side attacker.

So is it all roses and headshots for Gloria & Inteleon? No, definitely not. The biggest problem here is the fact that, for a 4-bar move, Snipe Shot, has atrocious power behind it! This, combined with the low power of its other moves, means that Gloria & Inteleon will be struggling to deal damage on a par with their contemporaries, and are outclassed by a few other big-names that compete with them in their various types. We also have the issue of the way that their unique mechanic works in practice. First you set up a sure crit, then you fire away and get +1 MP, like we talked about. But then you’ll need to use the skill again for the boosts and slowly-mounting damage buffs. As if their mediocre damage output wasn’t bad enough, the intended way to use Gloria & Intelleon involves only attacking with them every other turn. Their defining gimmick basically cuts their damage in half, and then adds 50% to the resulting damage if the attack is Super Effective. Basically, the only time that this could be a viable tactic is when the team that they’re used with is irredeemably slow, but even then it’s likely to be sub-par. These factors come together to drag down their performance and make them very niche picks for their role.

As stated, Gloria & Inteleon are… awkward. They have specific needs, and their modus operandi is… well, awkward. They can operate fairly well if hiding behind a solid tank and a main striker, but they almost have to be used in a Water weak stage or as a Dark Pulse Flinch unit with proper support to operate at peak efficiency.

With free MP refreshes and free move uses, Gloria & Inteleon can actually work fairly well here. Their damage is somewhat lackluster, but they can add flexibility early-game for stages that aren’t ideal to use limited skills on. Just remember to always score the MP refresh on their trainer move before finishing the stage, otherwise you’ll have to fish for a natural Critical Hit next battle!

Not much to say here. They’re fine, but really prefer to deal Super Effective damage and/or to be buffed by the team.

When behind another powerful striker, Gloria & Inteleon can lay down some decent backup damage or flinch support. They’re not great in most cases, but they are decent. It’s worth mentioning that their Galar theme skill may come in handy for future challenges.

We don’t have many Galar Sync Pairs yet, so our time with the Galar squad might be a bit dicey for many players. However, Gloria & Inteleon aren’t top-tier choices here. They’re fine for the most part, but largely mediocre

These are generally the most important tiles on Gloria & Inteleon’s grid:

For lucky skills, Critical Strike 2 has outstanding synergy with Gloria & Inteleon’s overall kit, making it the skill of choice for patching up their semi-low damage.

Teams are a bit… awkward… for Gloria & Inteleon. They operate just fine, but they don’t have much that works exceptionally well with other sync pairs. Instead, they just want more support for what they want to do. Special Attack buffs and, to a somewhat lesser extent, Critical Rate buffs are important for raising Gloria & Inteleon’s damage, so sync pairs like Sabrina & Alakazam or Elio & Primarina make important partners. Rain support is also great for boosting Snipe Shot, so May & Swampert or Archie & Kyogre are great partners, as they can patch up the damage of Snipe Shot substantially. But bringing up the big-name rain setters also brings up a bit of an issue; while Gloria & Inteleon operate at peak efficiency with one of these two, neither of them really operates at peak efficiency when combined with Gloria & Intelleon. If abusing rain is the name of the game, then it’s probably best to just use them together instead, or to just use Cyrus & Palkia. They’re a free-to-play sync pair that offers substantially higher damage potential in the same basic role, though speed will be a bit more of a challenge to effectively manage. Honestly, Gloria & Inteleon are more a second pick rain attacker; they can put in the work, but are outclassed the majority of the time.

When going for Dark Pulse Flinch tactics, other Sync Pairs that have the capability to stop the opposition from moving in various ways can make great partners, with Steven & Metagross standing out for their high Flinch rate on Iron Head or Lisia & Altaria for their AoE flinch tactics with Twister.

No, it’s not really worth pulling Gloria & Inteleon… right now.

See, here’s the problem; as alluded to near the start of this article, this sync pair appears to be optimized to Gigantamax; a feature that we’re confirmed to be getting at the 2-year mark. We don’t know how this will affect Gloria & Inteleon, so it’s entirely possible that they may be perfectly suited for the new mechanic and will become rampaging monsters. We really don’t know, and have no way of drawing many intelligent conclusions as to how this will all play out. But for now, the lack of a solid and useful niche outweighs the small chance of a future meta-shift that draws Gloria & Inteleon into the spotlight. And besides; these arguments can also be made for Summer Marnie & Grimmsnarl, and they’re a much better investment for the here-and-now! For these reasons, it’s probably best to just let Gloria enjoy her summer in peace and invest your gems elsewhere.