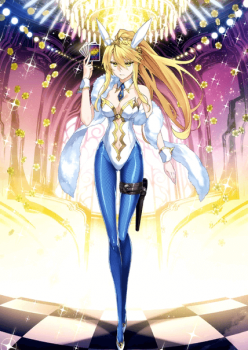 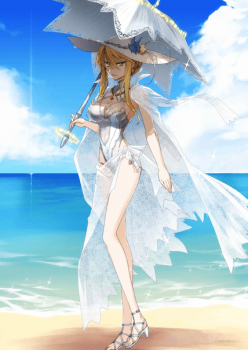 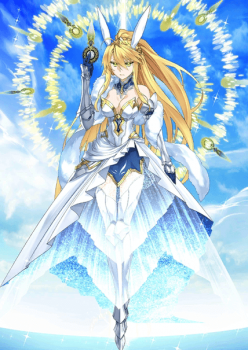 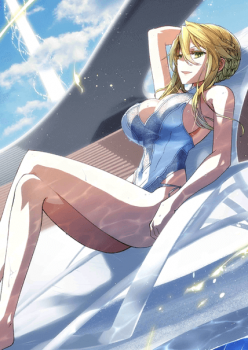 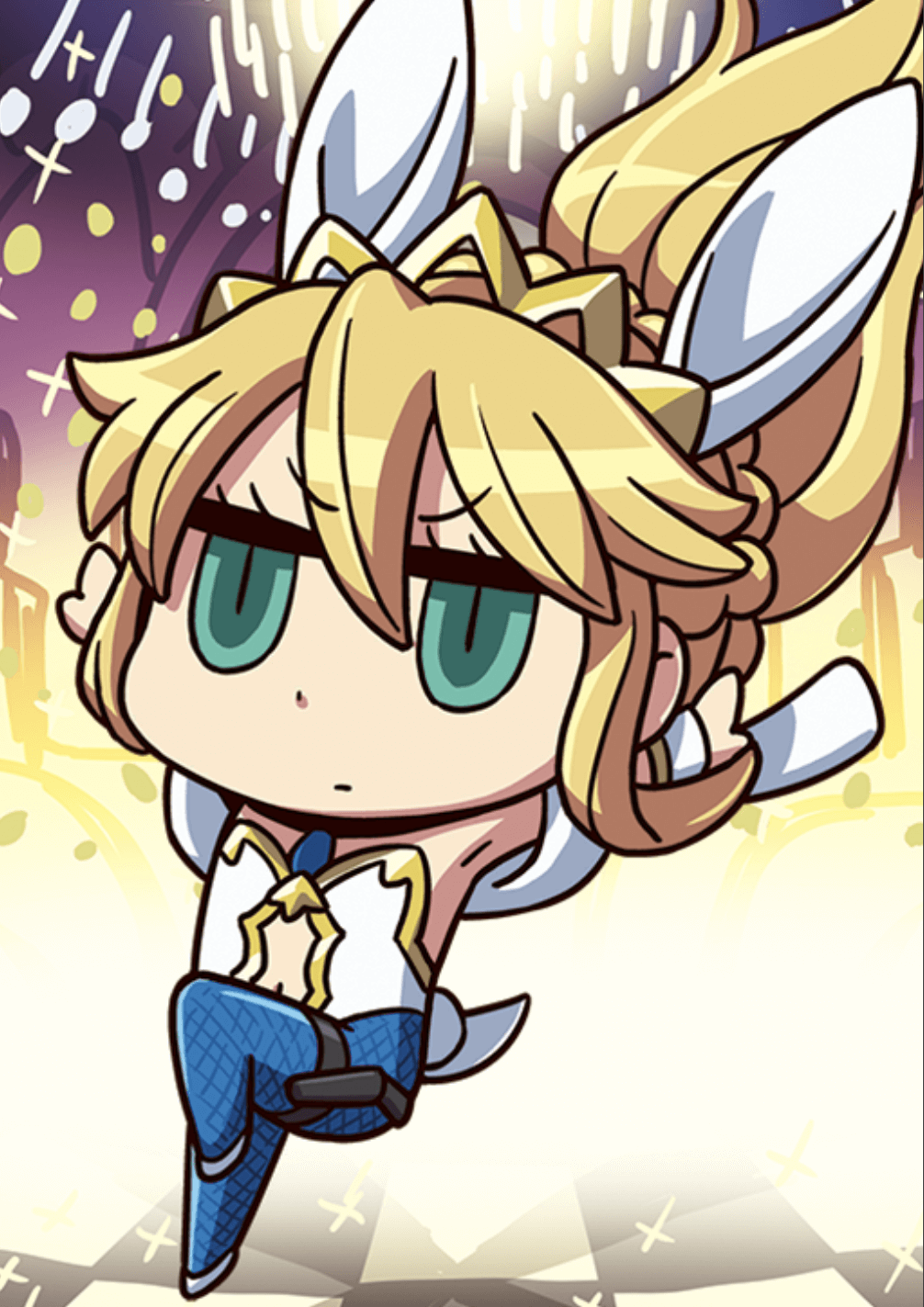 Increase own NP Gauge.
Apply Evade to self (1 turn).
Gain a delayed buff on self:
After 1 turn, increase own ATK (1 turn).

Knight of the Lion B

Deals damage to all enemies.
Increase your NP Gauge.

Be Brilliant, Our Shining Hall

When equipped on Altria Pendragon (Ruler),
Increase Attack by 10% & increase Critical Strength by 15% for all allies while she is on the field.

“I shall show you the essence of the Card!” — she’s not, however, related in any way to a certain nameless Egyptian pharaoh.

The so-called Swimsuit Lion King is the patron of the Swimsuit Swordmasters’ battle royale, as well as the undefeated dealer of Casino Camelot, a status she’s obtained thanks to her innate gambling strength, perception, and mental strength. Altria (Ruler) is a full-on offensive AoE Buster Ruler most known for her ability to deal a new set of Command Cards at will.

On first glance, Swimsuit Lion King’s kit seems to have the basics of a damage dealer role figured out, having two Attack buffs, an NP Charge, as well as Critical Star Absorption and Critical Damage Up buffs. She even has access to Card Performance Up buffs from her NP, and even Defense Ignore, on top of having a 20% NP refund just like her Lancer version. Aside from her offensive side, she also boasts the Ruler defensive class advantage, making her highly resistant to most enemies’ attacks, and her first skill Royal Bunny also provides a 1-turn Evasion to survive through enemy NPs.

Unfortunately, as a Servant so focused on being a damage dealer, Altria (Ruler) suffers from two critical issues, namely, her low Attack Stat as well as the Ruler class’s limited offensive class advantage. Furthermore, her kit can be somewhat tricky to utilize due to conflicting effects on Royal Bunny and RNG on Royal Card, though the latter would be alleviated after the skill’s Rank Up.

Due to the aforementioned problems, Altria is rarely, if ever, the optimal damage pick in any given situation, but that is no cause for concern. As long as one believes in the essence of the Card, then surely, Vegas’ strongest dealer will grant them Command Card draws sure to bring forth victory!

With a 40% NP Charge on Royal Bunny as well as 20% NP Refund on her NP itself, Altria Pendragon (Ruler) is a fairly flexible Servant where NP Charge is concerned, especially after Royal Card’s upgrade helps her form Brave chains with increased NP gain more easily. She does need slight external help to perform a first-turn NP with 50% Starting NP CEs, however.

Rulers enjoy a defensive advantage against six of the seven normal classes (excluding Berserker), making them highly resistant against most ingame enemies, including the majority of Servant bosses. They also deal at least neutral damage against non-Avenger classes; these two factors make Altria (Ruler) a viable damage dealer for Masters with more limited Servant lineups.

Though it is simply a nice bonus most of the time, Altria’s Ignore Defense can be a great boon in quests featuring Defense buff-related gimmicks, or otherwise against Servants with powerful and/or spammable Defense buffs.

While the Ruler class is great for more defensively-oriented Servants, it only has offensive advantage against Berserkers (an advantage shared by most other classes) and Moon Cancers, the latter of which isn’t exactly a common enemy class. As a result, Altria (Ruler) rarely benefits from the 2.0x damage provided by said advantage, making her far less enticing as a damage dealer in many situations.

Despite having a lot of self-buffs on paper, Altria (Ruler) suffers from a very low Attack stat, which undos much of the advantage said buffs provide. This also means that she scales slightly worse with external buffs compared to other Servants with higher natural Attack stat.

Altria’s kit comes packed with several useful tools, such as Evasion as well as a party-wide Critical Damage Up. However, both these effects are coupled with other conflicting effects, creating dilemmas in their use. Evasion is paired with NP Charge, meaning that one is usually used at the expense of the other (not to mention the delayed Attack buff, which adds another layer of complexity). Meanwhile, Critical Damage Up is lumped together with Command Card Shuffle, making it unreliable when used on demand.

It is recommended to max Altria’s first and third skills if she were to be used as a main damage dealer. While it’s also beneficial to level her second skill, it can generally be left at any level as the resource allows.

As a damage dealer, Altria (Ruler) favors hybrid Starting NP Gauge CEs, preferably with either Buster Performance Up, Attack Up or NP Damage Up as secondary effects. With proper support, she can also use CEs without Starting Np Gauge just as well.

1. It belongs to the owner of Casino Camelot, the king of Las Vegas's many dazzling casinos!
2. It belongs to the host who oversees the Seven Duels of Swordbeauties Championship Match, where contenders must fight with swords in hand, dressed in their best swimsuits, to make wonderful summer memories.
3. It belongs to Lancer Altria, who decided to put on her summer attire.

Also, this Lion King is entirely different from the Lion King of the Sixth Singularity, so try not to get them mixed up.

Height/Weight: 171cm, 57kg?
Origin: Legend of King Arthur
Region: England
Alignment: Lawful-Summer
Gender: Female
With her innate competitive instincts, keen observation skills, and mental fortitude, she holds dominion as Vegas' ultimate dealer.
No form of cheating will get past her, and even the luckiest are brought to their knees.

She is basically the same person as Lancer Altria.
However, since she's not on duty, she unconsciously believes that she can let loose a little bit, and so at times she makes surprisingly casual comments during the Swimsuit Swordbeauties' Seven Duels.

As a side note, since she is no longer a Lancer, her horse Dun Stallion is not by her side. It doesn't mean the white horse has disappeared, as there have been sightings of it resting at Chaldea's stable. So who's supplying the magical energy for it to manifest here?
The world may never know.

Royal Bunny: A
Take a look at that shiny thing atop the king's head. What is that!? It's like the ears of a beast! Could this possibly be from a dreadful beast that once terrorized Britain long ago, inflicting some sort of grudge or curse upon King Arthur!? Ohhh, you terrifying, snarling beast...dare you bare your fangs to the king even after hundreds of years...!?
...No, you are completely mistaken. Our king has shown interest in these beings called bunny girls.
Oh? Does that mean that getup is...?
...That's right. A costume.
Is that so?

Royal Card: C+
The king seems to be throwing some sort of dagger... No, it's something else. Are those...cards?
...Yes. The king has decreed that a casino dealer must be versed in handling cards.
I hear that this casino is a place for so-called games and amusement.
...That is correct. What of it?
But the way she throws those things, it looks like she's trying to eliminate enemies.
...Perhaps it is her way of kicking out drunks and other annoying customers.
Is that so...?

Knight of the Lion: B
It is said that a knight named Sir Ywain fought alongside a lion.
Thus, it's no surprise that his liege, our king, is be able to command a lion of light.
Unless, when her Spirit Origin changed, our king may have personally chosen this skill originally designated for Sir Ywain.
...That may also have some truth to it.
Hm.

Be Brilliant, My Shining Hall.
The highly mobile grand hall Ehangwen that sails over the water is temporarily materialized, and Ruler Altria, aka Summer Lion King, leaps up and shoots a giant ray of magical energy to attack all enemies.
It's unclear whether the past Ehangwen had any sailing or artillery capabilities, but it appears that this is somehow nothing but a casual attempt, as it was made after she said, "It hasn't been done...but there is no reason for it not to work."
As for its artillery, rumor has it that it might be accomplished by concealing her Rhongomyniad, or even that it could be the same Noble Phantasm as when she's a Lancer. The king does not deign to comment on either possibility.

Summer Lion King, Ruler Altria, intends to fully enjoy her vacation.
This is very rare, as she is the sort of Servant who's always on the battlefield, fighting endlessly without rest.
But then something happened...
A mysterious big brother's prank caused her to transform into Summer Lion King who enjoys her summer vacation wholeheartedly. Yes, it was Merlin. Obviously.

Masters, be warned:
She is serious.
Her normal straitlaced personality simply transferred over for her to enjoy her vacation very seriously, and she will absolutely not cut any corners on this.
Now come and join in!
Put your whole heart and soul into having fun!