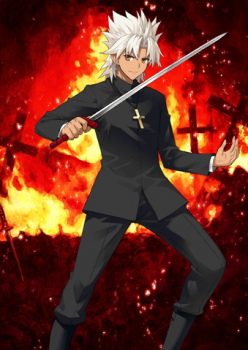 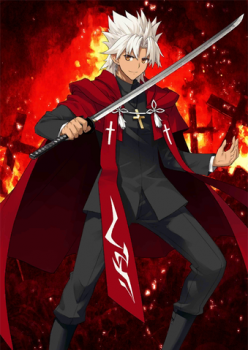 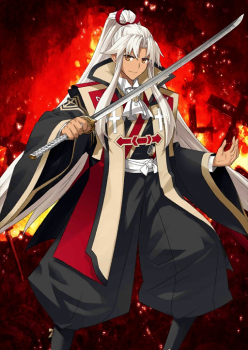 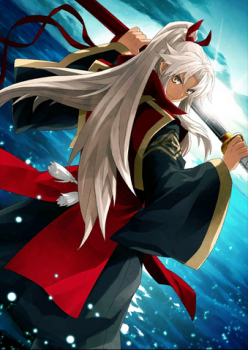 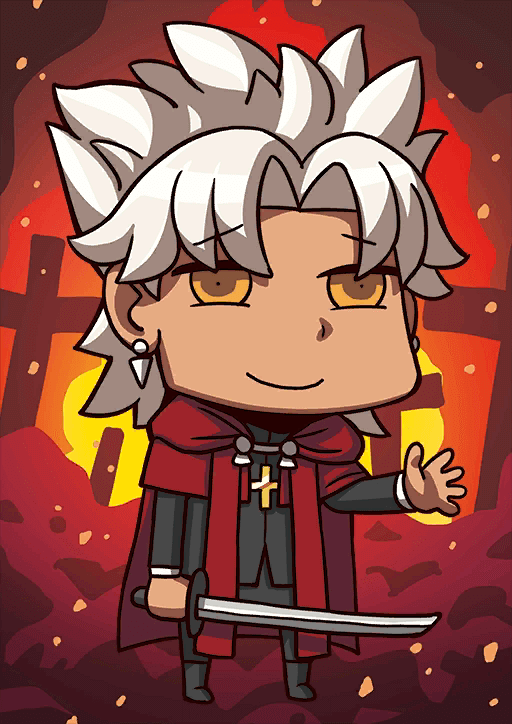 Prayer for the Long Journey A

Increase own NP Gauge every turn (5 turns).
Decrease NP Gauge for a single [Undead] or [Demon] enemy by 1.
([Demon] refers to enemies such as Daemons, and is different from [Demonic])

When equipped on Amakusa Shirou,
All allies will inflict 20% bonus damage against Undead and Demon type enemies while he is on the field.

“Let us go together, so we may reach the ultimate goal of world peace. Do not worry. I am with you.”

The mastermind behind the events of Fate/Apocrypha and the Ruler-class Servant who was never meant to be, Amakusa Shirou Tokisada joins Chaldea in pursuit of the Holy Grail. Once more, he will aim to use the Grail to achieve his dream of salvation for humanity. Until he can get his hands on it, though, he will serve Chaldea faithfully as an abnormal offensively-oriented Ruler with some tricks up his sleeve.

Amakusa combines the fantastic defensive nature of the Ruler class with a good attack stat, some all-around utility and critical support, and strong NP gain. His AoE NP unfortunately doesn’t hit very hard even post-Interlude, but it has a different reason for being his ace in the hole. Amakusa’s greatest strength, and claim to fame, is the AoE buff clear his NP inflicts on the entire enemy team before hitting, a niche that no other NP in the game can replicate. Additionally, he excels in mixed-class nodes where he can leverage his wide array of defensive class advantages and neutral damage with impunity.

However, the drawback of being an offensive Servant in a defensively-oriented class does show. Though Amakusa does have the aforementioned ability to freely choose targets without worrying about class disadvantage, he conversely won’t hit as hard as a dedicated damage-dealing Servant with offensive class advantage. Plus, his durability is limited by his lack of a hard defensive skill; though he’s made of stern stuff when it comes to soaking normal hits, an NP will most likely still obliterate him. Still, even with these drawbacks, Amakusa Shirou brings many strengths to the table and is a unique and enduring pick for many tough fights and challenge quests.

The ability to clear buffs on the entire enemy lineup makes Amakusa and any other team members capable of freely outputting damage without having to worry about enemy dodges, invulnerability or other buffs getting in the way. The fact that this ability is on his NP additionally means he isn’t gated by skill cooldowns when it comes to clearing buffs. This unique strength alone is enough to make Amakusa the premier pick for many challenge quests.

With decent NP gain on his Arts cards and his single Quick card, as well as fantastic NP gain on his Extra, Amakusa does an acceptable job of charging his NP with just his basic cards. However, he also possesses a powerful NP charge skill, giving him up to 100% charge spread out over five turns when maxed out. The risk of being unable to use his NP at a critical time is very, very low.

Despite not having an absurdly high health pool like fellow Ruler Jeanne d’Arc, Amakusa is still one of the bulkier Servants in the game, considering that his Ruler classing reduces damage from six of the seven standard classes. However, without any sources of healing in his kit or hard survival skills, if Berserkers or Avengers are present, he has absolutely no defenses besides his above-average HP. Still, his fortitude against multiple opponents in mixed-class nodes is noteworthy.

With Revelation generating a decent number of critical stars per turn and Divine Judgment serving as a fairly reliable anti-Servant stun, Amakusa provides a good amount of support to the team even when the utility of his NP isn’t required.

Despite his good attack stat (boosted by the 1.1x Ruler multiplier), Amakusa’s overall damage will rarely reach the heights of other damage dealers due to lack of class advantage. Though Twin Arm - Big Crunch has unparalleled utility, it won’t be serving as a waveclear nuke unless used against an all-Berserker enemy lineup. The same goes for his basic cards; he’ll hit everyone for a decent amount, but won’t be blasting anyone particularly hard.

While Amakusa will almost never be taken down by regular card damage unless facing Avengers or Berserkers who get lucky with crits, he lacks a dodge, invulnerability or guts skill, and will most likely die if an enemy Servant manages to get their NP off. To survive these threats, he will have to rely on outside support.

Though Amakusa has a strong skill set, it’s also one with above average cooldowns (notably a whopping 10 turns on his 5-turn uptime NP charge) even when maxed. While he can provide some decent card damage and has above average star generation and NP gain, his effective value drops significantly during his downtime. Because of this, he relies on having his skills at a high level, but unfortunately he has some of the most expensive skill leveling requirements in the game, which can often serve as a roadblock to achieving his peak performance.

Amakusa's most powerful niche is the absurd utility of Twin Arm - Big Crunch, and therefore prioritizing consistent NP gain indicates maxing Baptism Rite first. Of his remaining skills, Divine Judgment is more specific, but provides better benefits after its Rank Up or in Servant fights, whereas Revelation is consistent but not particularly impressive overall. Masters can decide which to level second based on what role Amakusa plays in a team.

Because Amakusa’s main strength, the buff clear on his NP, is independent of CE selection, he’s free to focus on a variety of different choices. Generally, he likes Buster Up, NP Damage, Critical Damage, and a variety of utility CEs depending on the situation.

Leveraging his high attack stat, decent star weight, and strong offensive presence in mixed-class nodes, Amakusa can easily serve as the primary Critical DPS with these CEs and some help with star generation from the team. What he lacks in sheer firepower, he makes up for with consistency. As a nice bonus, Victor’s abnormally high Attack stat boost synergizes well with the Ruler 1.1x multiplier.

Pure Buster Up CEs are a straightforward way to buff Amakusa’s NP and his strongest damage base cards. Note that with his in-kit Buster buff, Amakusa will miss out on the potential multiplicative stacking from other types of buffs. First Sunrise is a hybrid option that sacrifices some Buster damage in favor of providing a healthy amount of starting NP gauge.

Because of his high natural durability and his Ruler class resistances, Amakusa can run The Black Grail and supercharge his otherwise low NP damage without worrying too much about the demerit. If Black Grail is unavailable or the HP loss per turn is daunting, Heaven’s Feel or other budget NP damage CEs are fine substitutes.

Given that Amakusa’s basic cards are all fairly good and he doesn’t need to focus on boosting a specific card type, he can benefit from the universal Attack buff provided by Golden Sumo for overall higher damage, while the starting NP charge is a nice bonus. Holy Night Supper keeps the starting NP charge, but trades the Attack buff for two useful buffs to NP Damage and Critical Damage, which stack better if he gets any Attack buffs from external sources.

Since Amakusa already has some critical support built into his kit, he can carry 2030 if he is meant to be a purely supportive utility pick and serve as a decent star engine for the team when Revelation is up.

The boy named Amakusa Shirou Tokisada was undeniably the leader of the Shimabara Rebellion (though under the instruction of multiple ronins).
But how was his talent found, exactly?
Much of his life is shrouded in mystery.

A young boy who led the Shimabara Rebellion during the early days of the Edo period.
From a young age he was a dutiful student, who one day began to perform various miracles.
He healed wounds, walked on water, and was soon worshipped by peasants who followed the forbidden religion as a child of God.

He led the ancient retainers of daimyo Konishi Yukinaga in a rebellion against the Edo Shogunate, which caused a full-scale rebellion to break out among the suffering peasantry of Shimabara.
At first, the shogunate underestimated the rebellion, but after their first expeditionary force was defeated, they sent a larger force led by Matsudaira Nobutsuna.

Matsudaira besieged the rebellion's stronghold of Hara castle, and launched a full scale attack when he judged that their provisions and ammunition had run out.
Except for a lone traitor, it's said that all 37,000 people who participated in the rebellion, including Amakusa Shirou Tokisada himself, were slain by the shogunate forces. (Some, however, disagree.)

[Twin Arm - Big Crunch]
Rank: A+
NP Type: Anti-Army
Range: 1-200 Maximum Targets: 500
First he connects both his arms to leylines, and causes them to go out of control by overloading the magical circuits with excessive magical energy.
In doing so, he creates pseudo-dark matter, a Noble Phantasm of massive destruction.
Because the activation requires so much magical energy, it is almost impossible to be utilized as a Noble Phantasm under normal conditions.
The only way for this Noble Phantasm to be fully functional, is for a different source of magical energy other than the Master to be established.

His stats may be average, but during the Third Holy Grail War in Fuyuki, there were records of him being summoned as a Ruler class Servant.
Due to his strategy of utilizing Command Spells gained from Divine Judgement, and attacking enemies weaknesses using True Name Revelation, he was one step away from grasping the Holy Grail.
However, he was defeated with his Master's death.

That's where his dream began.