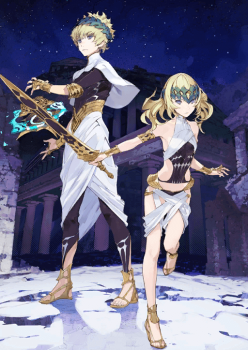 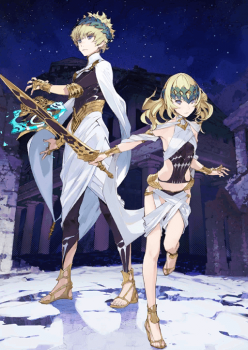 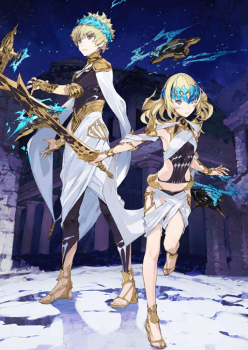 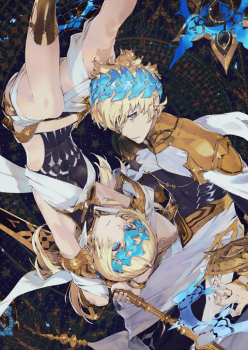 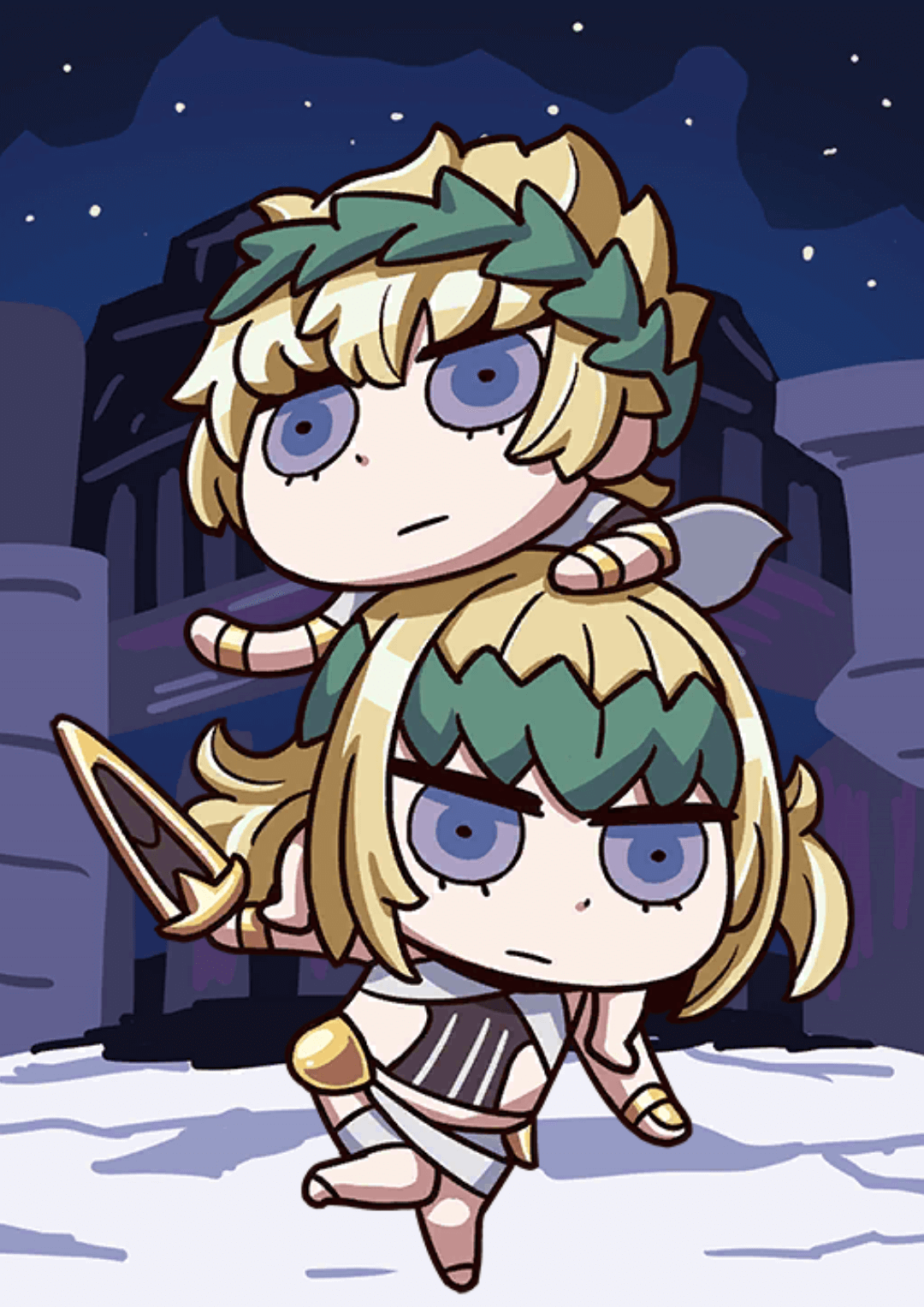 Star of the King of the Gods A

Guardian of the Sea Voyagers B

Increase your Buster Card effectiveness by 7.5%.

Increase NP Gain when damaged by 18%.
Decrease Debuff Resist for all allies (including sub-members),
except yourself by 8%. [Demerit]

Core of the Twin Gods B

Apply Ignore Invincible to self (1 turn). [Activates before damage]
Deal damage to a single enemy that ignores DEF.

When equipped on Dioscuri,
Increases all allies' Arts and Quick cards effectiveness by 10% when they are on the field.

“Something I like? What is there other than Sister?
Brother, the phrasing… The phrasing is a bit…
What. You say it too. “I don’t need anything other than my brother.”

An eternal bond honored by the constellation Gemini, the divine twins Castor and Pollux have manifested in a single Saint Graph as proof of their inseparable relationship. A single-target Arts damage dealer, the Dioscuri are known for their ability to perform NP spam.

Their Noble Phantasm, Dioscures - Tyndaridae, boasts an impressive hitcount of 8 hits, on top of having built-in Ignore Invincible and Ignore Defense, letting the Dioscuri bypass all but the most powerful defensive measures. It also slightly reduces the opponent’s resistance towards Arts and Quick cards for 3 turns, the benefits of which can stack up over time in longer fights. Mana Burst (Light/Ancient) boosts their Quick and Arts cards for 3 turns, further improving upon their already-high base NP gain. Star of the King of the Gods, combined with the stars from Dioscuri’s two Quick cards, provide some extent of critical play to boost their performance even more. Rounding up their kit is Guardian of Sea Voyages, which aside from being a party-wide damage boosting skill also provides the Dioscuri and their allies with a 1-time Debuff Immunity.

The Dioscuri’s main noticeable weakness is that their Evasion is contained within Mana Burst (Light/Ancient), forcing Masters to choose between using the skill for offense or defense. Despite the critical stars they can generate, the twins also lack a Star Gather Rate Up skill, which can cause them to lose out on some critical stars especially when Archer or Rider allies are involved.

Ultimately, these are all minor issues which do not take away from Dioscuri’s main draw as a Servant, which is their NP-spamming capability. Accompany them with a couple Arts supports, and watch as the eternal twins demonstrate their bond through their ultimate combination attack!

The twins’ ability to spam their NP is a result of a mix between high base NP gain, high NP hit count, as well as powerful passive skills (namely Self-Restoration (Magical Energy) and Core of the Twin Gods). This capability allows the Dioscuri to apply their NP’s Arts and Quick Resistance debuffs nearly continuously on a single target, increasing their own long-term performance. Keeping in mind Arts teams’ capability to supplement such a style of play, Dioscuri’s spammable NP makes them a terrific single-target damage dealer option even against neutral damage enemies.

While the high hitcount of Dioscures - Tyndaridae is its greatest strength, the NP’s other effects shouldn’t be overlooked, as it contains both Invincible and Defense Ignore, with the former even applying to any other command cards the Dioscuri use for the rest of the turn. Coupled with Guardian of Sea Voyages’s Debuff Immune effect, the twin gods are quite well-suited to the harsh environment of challenge quests, further increasing their value as a Servant.

The fact that Mana Burst (Light/Ancient) contains Dioscuri’s best damage boosting effects often means that its Evasion effect will be used suboptimally in order to maximize the skill’s offensive benefits. With the skill’s quite lengthy cooldown, this means that the twins will likely need external support to survive enemy Noble Phantasms.

Despite having several critical-related skills, the Dioscuri lack both Star Gather Rate Up and Critical Strength Up skills (save for a measly 6% from Oblivion Correction) to fully make use of them. Therefore, their criticals generally act more as a bonus to their already-high NP damage and NP gain, though the critical affinity they do have does help the twins fulfill a critical damage dealer role with the right supports.

All three of Dioscuri’s skills provide some sort of offensive benefit, and should all be leveled at some point. However, due to the twins’ emphasis on natural NP gain, there isn’t a specific threshold for any of the skills, meaning they can generally be leveled at the Master’s leisure.

As an Arts damage dealer, Dioscuri works best with either Starting NP or Arts Performance Up effects, with NP Damage Up and NP Gain Up also being desirable effects. Critical Strength Up is also an alright choice if none of the others are available.

Once there was a set of twins (Dioscuri) who ascended to the heavens to become the shining constellation Gemini...

According to the "Catasterismi," written around the 3rd century B.C., the constellation Gemini was known as Dioscures, consisting of Castor and Pollux. The two appeared in the land of Laconia (the southeastern part of the Peloponnese peninsula) and later ascended to the heavens. It is said that the loving bond these siblings shared was unparalleled.

To immortalize the siblings' closeness, Zeus, king of the gods, combined stars from two independent constellations into a new constellation known as "the Twins."

Height/Weight: 175cm, 57kg (Sister), 175cm, 67kg (Brother)
Origin: Greek Mythology
Region: Europe
Alignment: Chaotic-Balanced
Gender: -
Dioscuri are always together. It may be fair to call them inseparable. Though they are two people, they make up a single Heroic Spirit.

Originally the Dioscuri were ancient twin gods that took the form of young horsemen, or even horses themselves. They were said to be saviors of humans who were in danger, such as those in battle or at sea. The twin gods were long referred to as "the two gods," without individual names. The names Kastor (Castor) and Polydeukes (Pollux) were first recorded in the "Homeric Hymns," a collection of hymns praising the gods composed during Homer's era.

They bore the title "Anakes," which means "lords" or "kings." In later ages, they were regarded more as guardians of sailors thanks to their appearance as members of the Argo's crew in the "Argonautica." The flash of light that discharges from ships' masts during storms, known as St. Elmo's fire, was believed to be the twins manifesting to guide ships at sea.

As they are already ancient Divine Spirits, the Gemini possess a unique characteristic upon their manifestation: while being a single entity, they retain two separate bodies, and each of their bodies retains the attributes of a different class.

The elder brother, Castor, who was not the child of Zeus, harbors bitter resentment for the gods who led humans to ruin. He possesses the characteristics of an Avenger. The younger sister, Pollux, Zeus's immortal daughter, is a Saber who leverages her invincible physique to facilitate her indefatigable application of her masterful sword work.

While the Gemini's Spirit Origin is registered as a Saber because of their nature as a single entity, they function as a dual-class Servant. This unique characteristic was likely allowed because they are a Divine Spirit Servant.

Core of the Twin Gods: B
A skill possessed by both twins.
Normally, the skill should be at least rank A or nonstandard because of their status as ancient twin deities, but the Greek myth of the Gemini that later became so widespread caused the skill to instead manifest at rank B. This also likely happened because later tellings specified that Castor lacked divine blood.

Star of the King of the Gods: A
A skill that represents the two individuals merging into a single entity and becoming a constellation.

Guardian of Sea Voyagers: B
Protects those who travel on ships.
The twins' presence rouses those about them, instilling them with hope and determination to overcome the challenges facing them. It is similar to Voyager of the Storm, and originally was a compound skill that included Tactics and Charisma.

Mana Burst (Light/Ancient): A
The twin deities are said to be the very representation of St. Elmo's fire, the strange light sometimes observed at sea. This is quite unlike the pseudo-Mana Burst many saintly Servants possess. Magical energy is discharged as light, and increases the target's combat strength.

Poetic Praise of the Twin Gods.
Power that combines Pollux's skilled swordsmanship with Castor's rage against the gods for the devastation they cause. It is a most devastating combined attack the twins unleash. This attack is made possible by the coordination born from the twins' implicit trust in each other, and so has become their Noble Phantasm.

Additionally, when its True Name is revealed, the two almost completely regain their Divinity from their time as ancient deities, temporarily elevating this attribute to its maximum rank. Because this attack utilizes the near-perfect magical energy of a Divine Spirit, it ignores various physical and magecraft-based defenses, utterly obliterating its target.

The Gemini materialized as a deity at the time of the Fifth Lostbelt's inception. However, they were defeated in their battle against Kirschtaria Wodime, and after temporarily losing their life, they formed a contract with Kirschtaria as a Lostbelt Servant. By forming a contract, Castor learned of the version of their legend native to Proper Human History. Though the myth was from Proper Human history, Castor could not help but harbor a tremendous hatred to humanity for what he saw as their looking down upon him. Pollux, too, shared that hatred after learning what her brother was made to experience.

Consequently, both siblings came to be dominated by their hatred of humanity, leading to their brutal violence toward Chaldea and the citizens of Olympus.

On the other hand, the twins who were summoned to Chaldea as Servants of Proper Human History are not so violent as the twin deities of the Lostbelt. Even though Castor possesses requisite mentality to establish his Spirit Origin as an Avenger, his younger sister Pollux's more calm and demure personality than that of her Lostbelt Servant equivalent is able to placate the older brother's wrath. You can mostly ignore the older brother...up to a point.