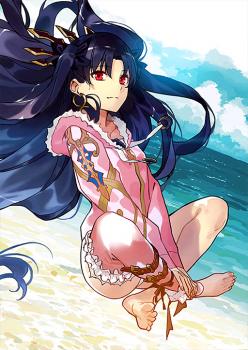 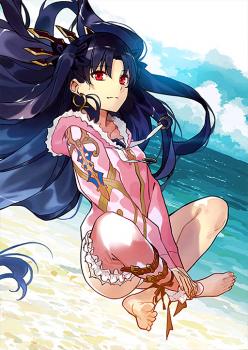 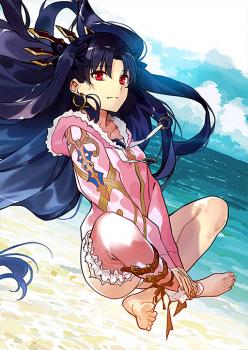 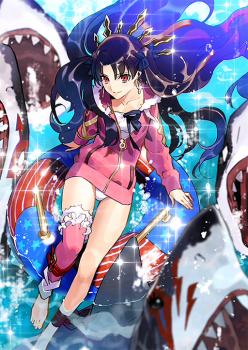 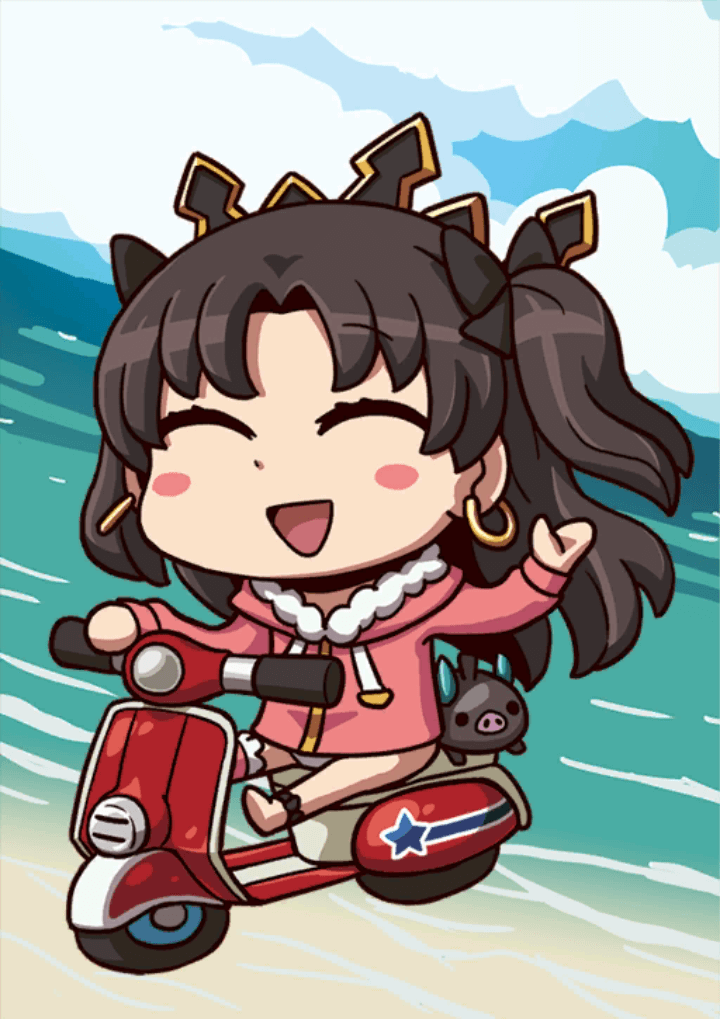 Heal Received Up Self Stun [Demerit]

Champion's Cup of the Goddess

With her warp-enabled scooter in tow, Ishtar is ready for FGO’s second Summer event. Rider Ishtar is a critical-oriented AoE Quick Servant who is notable for her ability to function as a semi-support for Quick (and certain Buster) teams. She brings a nice mix of damage and support, which makes her an interesting option for teams that can not afford to run a second full support Servant.

As Ishtar is a welfare servant, she benefits from reaching NP5 for free. This, combined with her strong sustained Quick buffs, from her Riding EX, Overcharge and from Shining Water Robe, means she can consistently output a high level of AoE NP damage. Additionally, she has both Independent Action and a pair of critical damage buffs on Accel Turn and Summer Breaker, which can allow her to reach substantial levels of burst-turn damage against a single target. Most importantly, though, Shining Water Robe boosts both damage and NP gain for Quick- and Buster-oriented Servants, boosting overall party performance. Lastly, Ishtar packs a double heaping of hard survival cooldowns, making her one tough goddess to take out with enemy NPs.

In exchange for her strong damage potential, Ishtar has an awkward hit count spread that leaves her NP gain heavily concentrated on her Arts cards, making it a bit tricky for Ishtar to use her NP as often as she would like. The spread of Ishtar’s damage buffs also means her normal attack damage will suffer outside of her burst turn, as the critical attack damage boosts from her skills only last a single turn. Ishtar also has to work with a demerit on her third skill that slows her sustained damage and lengthens what are otherwise good skill cooldowns.

Ishtar is an odd servant overall. She has a lot of individually strong tools that lack obvious synergy. With some creativity, though, she can be a powerful addition to certain teams, particularly when paired with servants who can make use of her support capabilities.

Most of Ishtar’s Quick damage buffs are automatically applied every single time she uses her NP, and the one that is not is still on a short cooldown with only 2 turns of downtime at max rank. This, coupled with the fact that Ishtar will be at NP5 by default for most Masters and that Quick NPs pack a slightly higher effective modifier than normal, results in Ishtar’s NP damage being both both consistent and high.

With Independent Action and with both Accel Turn and Summer Breaker, Ishtar potentially gains a total bonus of 110% to her critical damage for a turn. Additionally, between Ishtar’s innate Rider-class star weight and her Quick-leaning deck, it is fairly easy for her to enable her own critical attacks.

Shining Water Robe amounts to a fairly significant boost to the party’s Quick cards’ performance. Servants with QQABB decks tend to gain a lot from this buff, as it allows them to quickly build NP, makes their cards hit harder, and amplifies their NP damage. After all, NP Gain buffs and Card Performance buffs stack multiplicatively.

With both an Evasion on a 4(!) turn cooldown, and an additional Invincibility on a 6 turn when her skills are maxed, Ishtar is very sturdy against any opponent that relies on dealing damage in single bursts. In addition, Ishtar can tank successive NPs, a  feat few Servants can pull off.

Ishtar has remarkably good Arts cards relative to her deck, but in exchange her Quick( and Extra) cards are terrible. Ishtar needs to prioritize her Arts cards in order to fill her NP gauge, as even with the benefit of her innate buffs her Quick cards are not particularly effective.

Outside of her critical attack burst turn, Ishtar’s offensive buffs are fairly weak, and her deck is unsuited for dealing damage. Unless she can use her NP consistently, Ishtar’s damage output is at the mercy of her skill cooldowns.

Summer Breaker is a powerful skill, but its stun demerit interferes with the rest of Ishtar’s kit. Skill cooldowns do not advance while a servant is stunned, and Ishtar is dependent on frequent use of her skills for both critical attack damage and party support. Summer Breaker also boosts Ishtar’s NP gain for a turn, but if she is stunned, she cannot use her NP on the following turn.

Both of Ishtar's Survivability tools also include her primary means of Critical Damage enhancement. As such, in practice, Masters may need to forego stacking both of her Critical Damage buffs to keep Ishtar alive for longer. In addition, timing Ishtar's survival cooldowns often leads to letting her offensive buffs go to waste.

As Ishtar is largely dependent on her skills, maximizing the active time of her various effects is her priority. Shining Water Robe in particular significantly improves the performance of both Ishtar and her allies while active. The goal in leveling Ishtar’s skills should be to bring all three skills to level 6 for the initial cooldown reduction, and then bringing them to max level one at a time.

If Ishtar is used in a semi-support role, Passive Star Generation CEs can help to ensure she is always able to benefit from critical attacks when her skills are available. These CEs also help a primary damage-dealer land critical attacks past Ishtar’s high innate star weight. Alternatively, Attack Up CEs stack well with Ishtar’s innate buffs for maximum damage output as Ishtar packs her own Quick and Critical buffs. NP Damage Up and NP Gain Up CEs, by contrast, can help Ishtar to leverage her AoE damage potential. CEs with Starting NP Gauge are also excellent picks for farming scenarios.