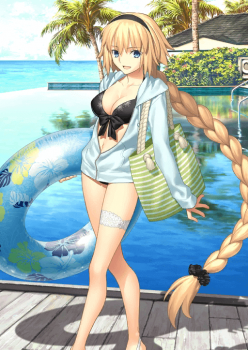 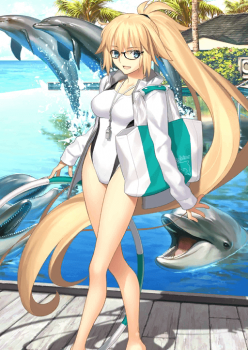 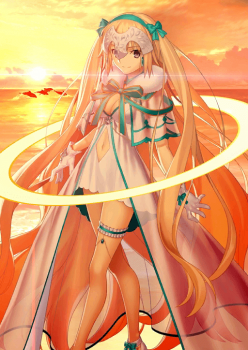 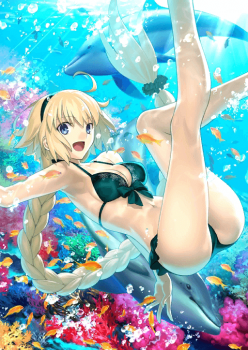 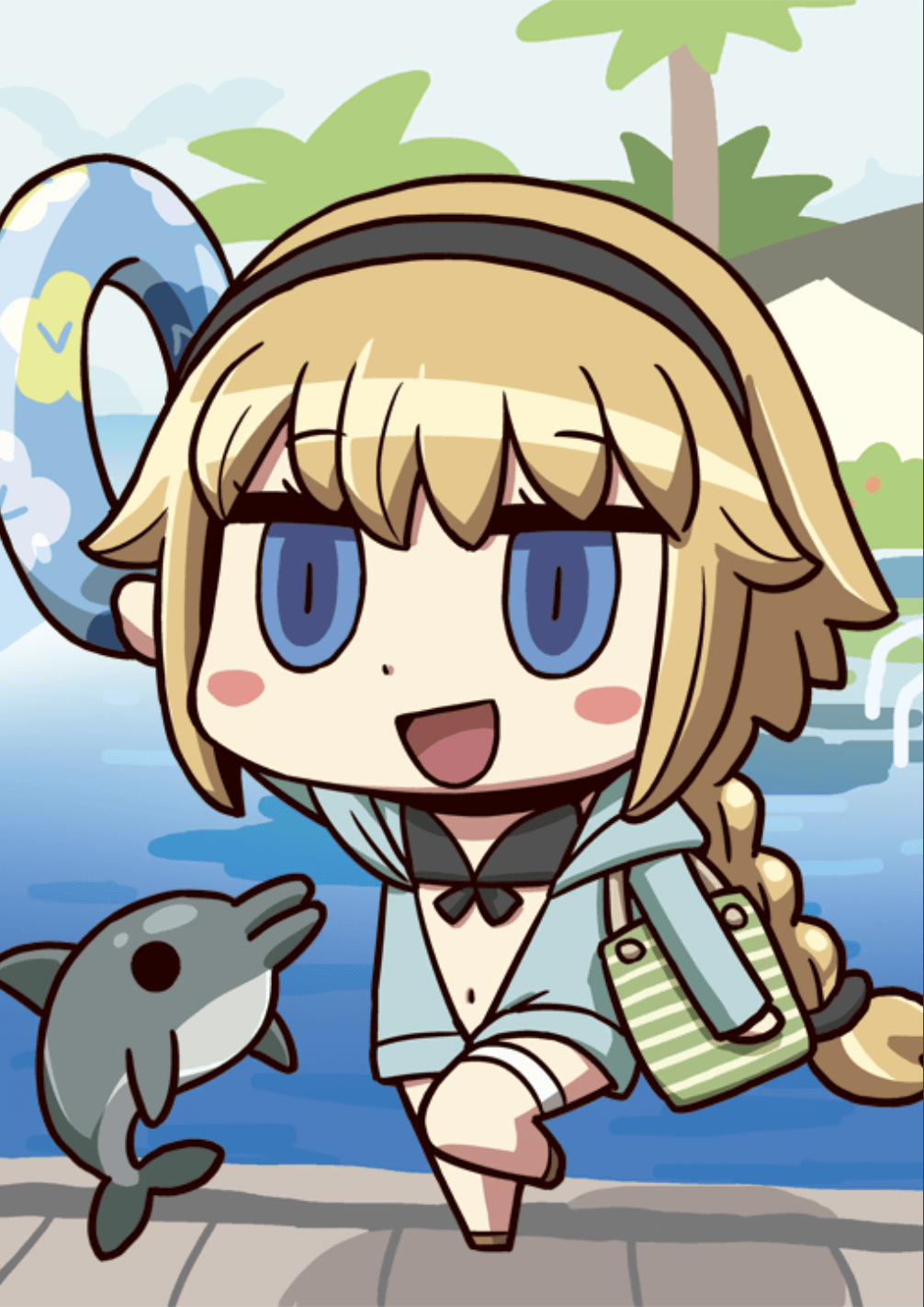 Self Crit Damage Up Field Bonus

Saint of the Shore (Dolphin) A+

Increase your Critical Strength by 10%.
Increase NP Gauge each turn by 3% only when on a field [near water] for yourself.

As the Ocean Gets Abundant, We Get to Delight in It

When equipped on Jeanne d'Arc (Archer),
Increase all allies' Arts Card effectiveness and NP Damage by 10% when she is on the field.

“I'm shooting those dolphins, and therefore am an Archer. There's nothing weird about that you know?”

The Maiden of Orleans, a saint who has found herself enamored with the spirit of summer . . . which somehow comes with the ability to command dolphins. As if to symbolize the endless blue waves of the ocean she so loves, Jeanne d’Arc (Archer) is an AoE Arts Servant who’s most known for her NP spam potential, washing all enemies away with the joy and excitement of summertime!

Jeanne possesses extremely high base NP refund among AoE Arts Servants, and she compliments this with a 3-turn Arts Performance buff from Enjoying Endless Summer! as well as an instant NP Charge, courtesy of Saint of the Shore (Dolphin). Jeanne’s NP’s secondary effect grants her a passive amount of critical stars every turn, which when combined with its spammable nature and Jeanne’s high Star Weight, makes her a fairly effective critical damage dealer. Unlike many other damage dealers, Jeanne also possesses a powerful defensive option in the form of her first skill’s 2-hit Invincibility, and as the cherry on top, she gains considerable bonuses when fighting in Waterside Battlefields. Finally, Servant Cheer offers a standard 3-turn charisma to the team with an additional attack bonus for Good alignment Servants, making her a particularly powerful attack support in the right lineups.

Jeanne’s primary weaknesses lie in the damage department, especially the fact that she lacks an NP upgrade. While her NP damage still ends up being passable thanks to various 3-turn buffs from her three skills, getting enough Overkill hits to fully recharge her NP gauge may be a problem against higher HP mob waves. Similarly, this also means she may need higher skill levels (and the aid of some specific supports) before her NP refund would be enough to loop.

All things considered, however, Jeanne’s strengths far outweigh her weaknesses, and any Master with an interest towards Arts farming should find her a very valuable addition to their roster. Accompany her with Arts supports such as Paracelsus and Tamamo-no-Mae, equip a proper CE, and watch as Jeanne and her army of dolphins take care of waves of enemy Sabers!

Jeanne d’Arc (Archer)’s high base NP refund means that it scales really well with Arts and NP Gain buffs, external or otherwise; Jeanne is one of the best candidates for Arts NP looping, and under the right situations is capable of consistently refunding her NP Gauge to full. Furthermore, her offensive self-buffs all last for 3 turns, allowing Jeanne to secure Overkills in earlier waves without having her damage fall off in the final wave.

In addition to the ever-valuable Craft Essence flexibility, her instant 40% NP Charge provides Jeanne with a way to play around waves with only two mobs, eliminating a problem which greatly hampers other looping Servants.

Despite her QAABB deck and Arts NP, Jeanne has a natural affinity towards critical hits thanks to her Archer class bonuses as well as her NP’s critical star generation. On top of these things, her critical damage ends up being quite powerful thanks to her self-buffs, particularly on her Arts cards. This critical aspect of Jeanne’s kit allows her to effectively deal with high HP mobs, provided her cards do appear.

Her third skill provides a base of 20% bonus attack to all allies, and another 20% additional attack for [Good] alignment enemies aside from herself, bringing the bonus to 40% total. This makes her also a great choice to bring as a source of additional attack buffs when bringing Good-aligned Servants in the party.

While Jeanne’s many offensive buffs bring her NP damage to an acceptable level, this can only go so far due to the NP’s unupgraded nature. With external buffs and leveled skills, Jeanne is able to take care of most Saber and Berserker mobs in the game, but the real question is whether she is able to get enough Overkill hits to fully recharge her NP gauge. Additionally, her second skill’s NP Strength buff is also tied to her 40% NP charge, and at times Masters may opt to hold off on using the skill until the NP charge is needed, which can also effectively decrease her damage in the meantime.

Without the aid of NP Charging Servants such as Zhuge Liang, Arts NP looping requires a full, 100% NP refund with little to no wiggle room. This generally means having multiple Arts supports with leveled skills, high skill levels on Jeanne herself, as well as a suitable Craft Essence (thankfully, she is more flexible on the latter thanks to her instant NP Charge). Nevertheless, it is a testament to Jeanne’s capabilities that she would still be able to perform at least two NPs within the duration of her buffs rather reliably even under minimal support.

Her critical damage potential is greatly boosted by her second skill, although this only takes effect in a field that is [near water]. This makes her critical performance not quite as universal as others in the roster, requiring the proper battlefield elements to reach her full potential.

All three of Jeanne (Archer)’s skills contribute to the stability of her farming runs, which means that they all should eventually be maxed. Should resources such as Crystallized Lore be an issue, it is recommended to max either her first skill or the second, depending on whether the composition needs the latter’s full 40% NP Charge for a first turn NP.

As with most farming Servants, Jeanne d’Arc (Archer) favors Craft Essences with Starting NP Gauge, though her instant NP Charge means that she will also be able to utilize hybrid CEs quite effectively. In particular, hybrid CEs that provide Arts Performance or NP Gain are desirable, although NP Damage and Attack Up are also welcome.

Jeanne (Archer) is one of several AoE Arts Servants who, under the right setup, are capable of performing 3-turn NP looping. Such compositions generally include the primary damage dealer aided by three Arts (Paracelsus, Tamamo-no-Mae) or NP Charge (Zhuge Liang, Helena Blavatsky) support Servants with the aid of Chaldea Combat Uniform’s Order Change skill. As the reliability of NP refunds depend greatly on Overkills (and in extension, enemy HP), specific compositions will vary based on the stage’s difficulty.