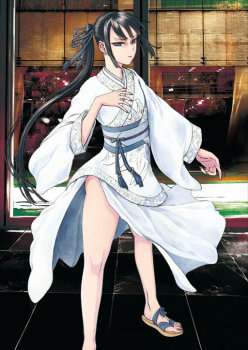 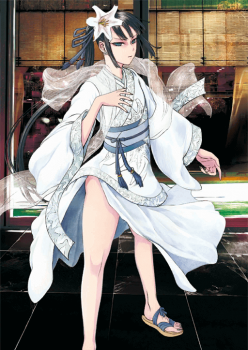 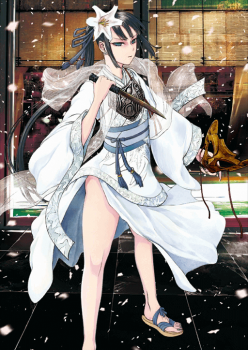 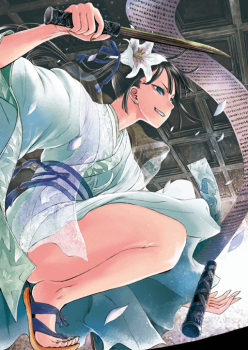 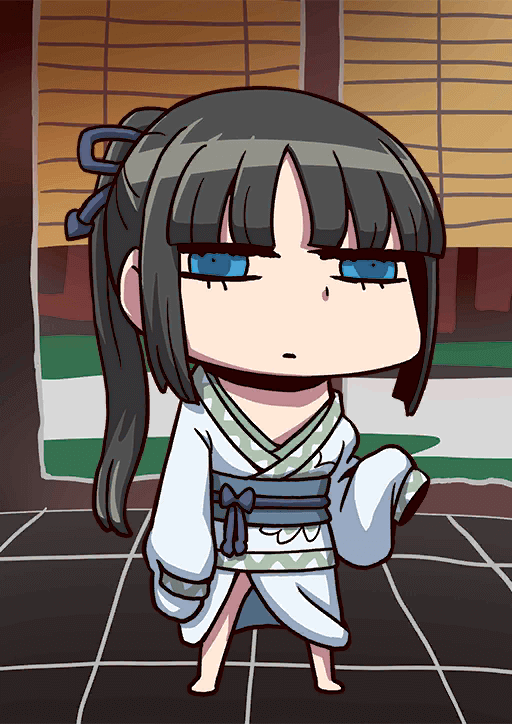 Ten Steps to Kill One Man B+

Apply Special ATK [King] to self (3 turns).
Apply effect to self (5 times, 3 turns): Decrease DEF by 10% for a single enemy (3 turns) when attacking with Quick Cards.
Increase own Critical Star Drop Rate (3 turns).

All I Do Is Kill B

Deal significant damage to a single enemy.
Reduce your HP by 1000. [Demerit]

All I Do Is Kill

Upgrade via Rank Up Quest 2.

Deal significant damage to a single enemy.
Reduce your HP by 1000. [Demerit]

When equipped to Jing Ke,
Increase own NP Strength by 30%.
30% chance to increase Death Rate by 10% (3 turns) each time you attack.

“From here I no longer fear death, no longer desire life. All I Do Is Kill.”

Infamous for her failure to murder the First Emperor of China, Jing Ke has been granted a second chance in Chaldea. Fitting for such a representative Assassin, her ingame kit revolves around her strong Quick ST NP as well as various Critical Star manipulation tools, which are two things the class is well-known for.

Jing Ke has the highest ATK stat of all 3-star Assassins, and with the damage boosts she gains after all her Rank Up Quests, she is offensively one of the best among her immediate peers. To compensate for her general low hit counts, Jing Ke possesses two ways to generate stars on demand through either her Restrain skill or her NP, All I Do Is Kill. Aided by the star absorption component of Restrain, she also has little trouble setting up critical hits for herself, or even her allies.

However, Jing Ke’s straightforward kit is also her downfall. Her damage and star generation tools are all she has: non-unique features that can be substituted with higher rarity Servants in the long run. As her methods of reliable critical star generation rely on her kit, Jing Ke’s general performance when her skills are on cooldown is much reduced, especially considering her Quick Cards themselves only create a paltry number of stars outside of Quick Chains. Finally, the lack of any defensive tools and an HP demerit on NP makes her rather fragile and unsuitable for extended fights.

Despite these weaknesses, Jing Ke is still a great offensive Servant for her rarity for the Assassin class, allowing new Masters to reliably deal with Rider bosses until stronger Servants are obtained.

With a single-target NP, a Quick Performance Up buff, an NP upgrade, as well as Critical Damage Up and Critical Absorption, Jing Ke has everything she needs to be a decent damage dealer. While her NP damage is somewhat middling before its Rank Up upgrade, it is generally enough to get the job done.

While Jing Ke’s star generation is helped by a high base star generation stat, Presence Concealment, and her Planning skill, her low hit counts severely hinder her potential in this regard. Fortunately, her Restrain skill and NP also grant her the means to create generous amounts of stars on demand, although the latter is somewhat hurt by her mediocre NP gain.

The two defining traits of Jing Ke’s kit - damage and criticals - are relatively common, and there are better alternatives for both. Her instant kill is unreliable (and more of a bonus effect) even when compared with other Assassins’, and with nothing else to set her apart from her competitors, this lack of specialization often finds Jing Ke struggling to secure a place in more developed rosters.

Jing Ke’s 3-star ATK stat, three Quick cards, and the Assassin 0.9x damage modifier hurt her overall damage outside of NP and critical hits, the former of which she often struggles to charge. She also has no survival oriented-skills, and even a 1000 HP demerit from her NP. As a result, Jing Ke is severely unsuited for longer fights.

Jing Ke’s low hit counts severely inhibit her potential, as they limit both her star generation and NP gain. While she has ways to create stars on demand to make up for the former, Jing Ke’s overall NP gain remains mediocre, even when helped with critical hits. Her single hit NP also eliminates any refund potential.

Although Jing Ke possesses multiple ways to generate stars, fully exploiting the potential in her kit is rather difficult. The Star Gathering aspect of Restrain makes using it as a support skill for allies much less effective. Furthermore, the critical stars from Restrain are insufficient by themselves to grant Jing Ke guaranteed critical hits. As Insolent is preferably used to boost her NP damage rather than her critical damage, the stars generated from her NP cannot be used to exploit her own critical potential either due to Insolent's single turn duration. Thus, in practice, her Critical Damage Buff may often go unused.

Jing Ke’s skills are fairly straightforward, and so are their leveling priorities. As her only damage boosting skill, Insolent should be leveled first. Restrain should be leveled afterwards, while Planning can be leveled last or even safely ignored.

Jing Ke’s Craft Essence choices revolve around amplifying her strengths. While Quick Performance Up CEs seem to be a no-brainer, hybrid CEs granting both NP Damage Up and Critical Damage Up are good picks as well, especially those with Starting NP Gauge effects. Depending on the situation, she also benefits from Passive Star Generation CEs. Being a 3-star Servant, Jing Ke prefers CEs with higher ATK stat bonuses.

These hybrid CEs are considered Jing Ke’s top picks, as the Starting NP Gauge allows the party to focus more on damage instead of gaining NP. These are preferred over pure Starting NP CEs as these also grant her considerable benefits on the long term, and Jing Ke’s NP is rarely needed in the first few turns.

Quick Performance Up benefits the damage of both Jing Ke’s NP and her three Quick cards, buffing her overall NP gain and star generation as well. These CEs grant the biggest long-term benefits for Jing Ke.

2030 is excellent in teams where Jing Ke is not the main focus. Coupled with Jing Ke’s own star generation capability, this would allow the team to have a relatively stable critical star source, indirectly increasing overall damage and NP gain. Should another Servant have 2030 equipped, this benefit is greatly magnified.

...Ten steps left, I'll make sure to kill you.
Jing Ke was an assassin who plotted the death of the First Emperor of China, and was one step shy of accomplishing it.
If she hadn't been stopped, she may have rewritten the entire history of China.

Jing Ke did not assassinate for a living, but was a merry person who loved reading, swordsmanship, speaking with intelligent friends, and above all, alcohol. When asked
to assassinate the First Emperor by Dan, the crowned prince of Yan, Jing Ke gladly accepted and carefully crafted a plan to assassinate the cautious emperor.

Holding a gift for the First Emperor in one hand, and holding a dagger laced with poison in the other, it was getting close to the execution of Jing Ke's plan.
She was waiting for a friend to help her assassinate the Emperor, but the friend never appeared.
Prince Dan speculated that "perhaps he lost his nerve."

Jing Ke had no choice but to head for Qin with a new assistant recommended by Dan.
However, the man who was supposed to help the assassination became unable to move out of fear.
Jing Ke tried to perform the assassination alone, but thanks to luck the First Emperor managed to escape.

Jing Ke mocked the Emperor as she was killed.
Even though Jing Ke was an assassin, she died without assassinating her target.
However, because she was brave enough to take on the attempt knowing she would not return, later generations praised her bravery.

The wind blows, the river freezes.The hero fords, never to return.  ...Poem left by Jing Ke as she departed