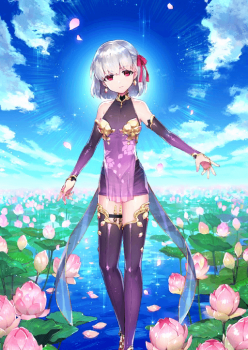 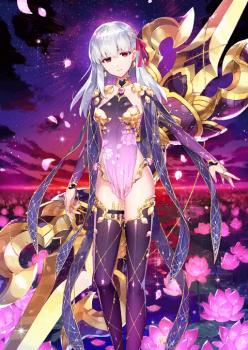 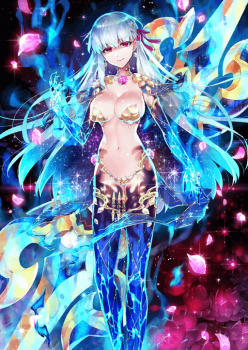 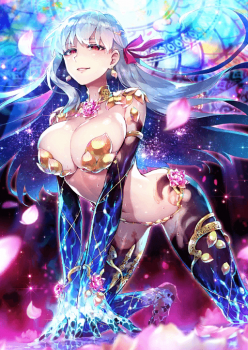 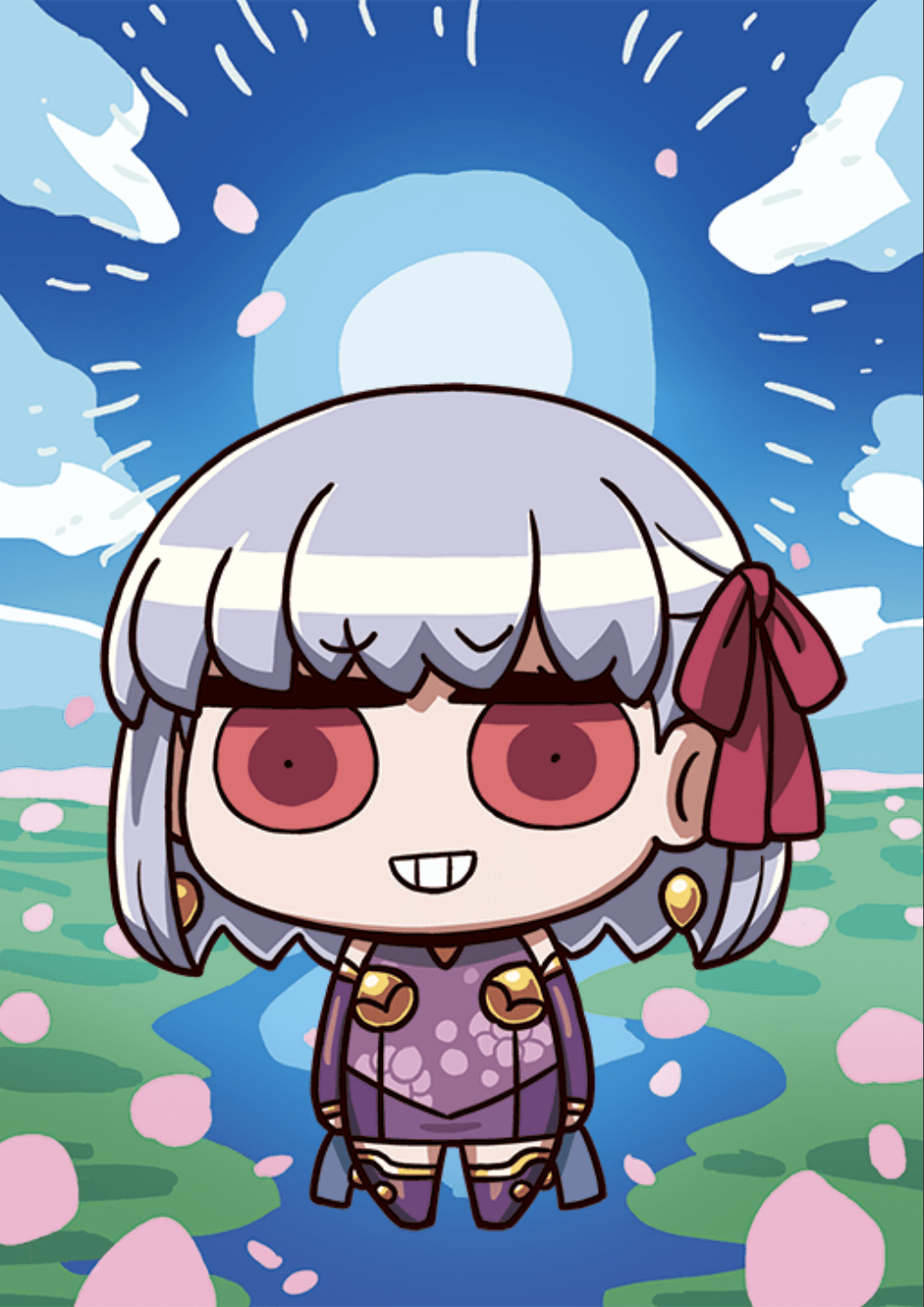 Blessing of the Goddess B

Decrease Max HP for one ally by 1000 (Permanent). [Demerit]
Increase NP Overcharge of one ally by 1 level (1 time, 3 turns).
Restore own HP.

Apply Guts to yourself (1 time).
Increase your ATK (3 turns).

Core of the Love God B

Increase your damage by 225.
Apply Charm Immune to self.

To Let Love Wither Away is To Be Loveless

Incinerating Affection in the Name of Love

When equipped on Kama,
Increase Quick Card effectiveness by 15% & increase Critical Damage by 20% for all allies except herself while she is on the field.

“Don't you dare treat me like those other child Servants. ...Hey wait. I'm not saying that I DIDN'T want that piece of cake you're holding.”

Once upon a time there was a need for a goddess who wanted to help Master explore any pleasure they desired, no matter how depraved it may be. So Kama came alone with a Quick Single Target Noble Phantasm with a high chance of charming its target, and became the premiere Challenge Quest DPS in the game for a long time. That way, Master can always find the pleasure they seek in winning the game.

Kama comes to be in the middle of the Quick-Meta stage of the game, and given her kit, reaps many benefits within that meta. Her Noble Phantasm is the biggest feature of all of this which, besides doing a very large amount of damage, has a very high chance of immobilizing an enemy for a turn via charm. And that’s not even mentioning how she can chain Noble Phantasms with its built-in Quick buffs to make successive Noble Phantasms even faster. And why can this girl use successive Noble Phantasms? She has a  super-rare feature for an Assassin: a 50% charge skill on Mara Pāpīyas EX! Of course, one must also mention her non-turn limited Guts skill on Ananga EX which can also be supplemented by Blessing of Goddess B’s huge heal to bring her back up to health. And then there is the fact that she can manipulate her class advantage, becoming one of the only Servants capable of gaining class advantage against Alter Egos.

With all those strengths, it’s hard to find any weaknesses in Kama, but they’re there. Most notably, she’s lacking in critical capacities save for a small critical damage buff. In addition, she lacks an ability to ignore invincibility and defense, occasionally making her competitors more viable.

With one of the most solid arsenals in the game for a damage dealer, nobody should ever not want Kama in their party for her sheer survivability, damage, and stall potential. Those three combined together make her a challenge quest beast, while still being a strong contender as primary damage dealer in non-challenge quest scenarios to take out a single larger enemy, or as a team anchor. Just make sure to save her a piece of cake for when the quest is done!

Despite Kama’s innate 0.9x multiplier due to her Assassin classing, she is one of the heaviest damaging Single Target Servants in the game. Not only does Ananga EX give her a strong attack buff for three turns, and not only does Riding A give her a Quick bonus, but she gains further bonus for 3-turns from her Overcharge’s Quick boost. If she can do multiple Noble Phantasms, any further one will continue to grant stacks of Quick boosts. With Skadi in play, this leads to insane damage numbers. She’s also great against Alter Egos, capable of hitting them with full class advantage with her Mara Pāpīyas EX boost up.

It’s hard to bring Kama down. She has a Guts on Ananga EX which does not expire, and Blessing of the Goddess A heals almost 1/3 of her HP every time she uses it. To make matters better for her, it’s hard to hit her back because she has an 80% chance to charm enemies each time she uses her Noble Phantasm. With Mara Pāpīyas EX’s +40% charm chance, she can guarantee the charm against almost any enemy in the game for a turn.

Kama has high hit counts, and despite being Single Target, she has decent refund on her Noble Phantasm. Like all 50% chargers, she can loop for 3 turns with a MLB Kaleidoscope, 2 Skadis, and a Waver. But due to her high hit counts and the guaranteed overcharge on her first skill, she can at times regenerate enough charge in a turn to not require a full 50% charge.

Kama can use her bonuses from Skadi critical bonuses to boost her Critical damage, but without a Skadi she has very little in the way of Critical boosts. She has only a 20% boost on a skill and Independent Action C, meaning she can’t provide much in the way of a Critical hit. She also is lacking Critical star generation passives, although that is partially relieved with her high hit counts.

There are not many single-target Assassins in the game with a self-charge skill. Those who have it have the capability to ignore invincibility and defense, making their attacks unavoidable. Unfortunately, Kama has no such ability, making it possible to avoid her Noble Phantasm at the wrong time.

Kama primarily serves as a Challenge Quest beast with high damage and multiple Quick Noble Phantasms which charms her enemies. In order to use this, she must prioritize skills boosting her looping potential first, then deal with her damage.

When Archer Illya comes out, if one wants to make use of Illya’s “Child Servant” buff, Kama must be in her first ascension’s sprite.