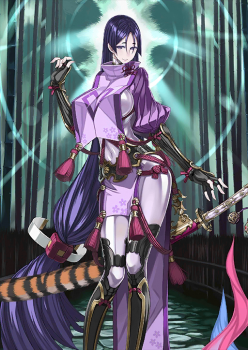 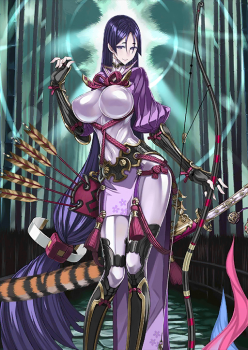 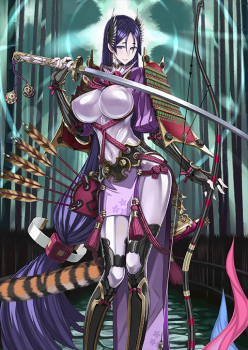 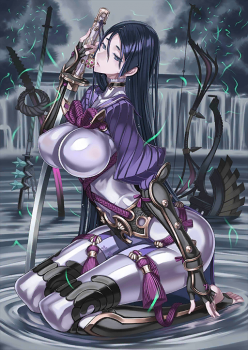 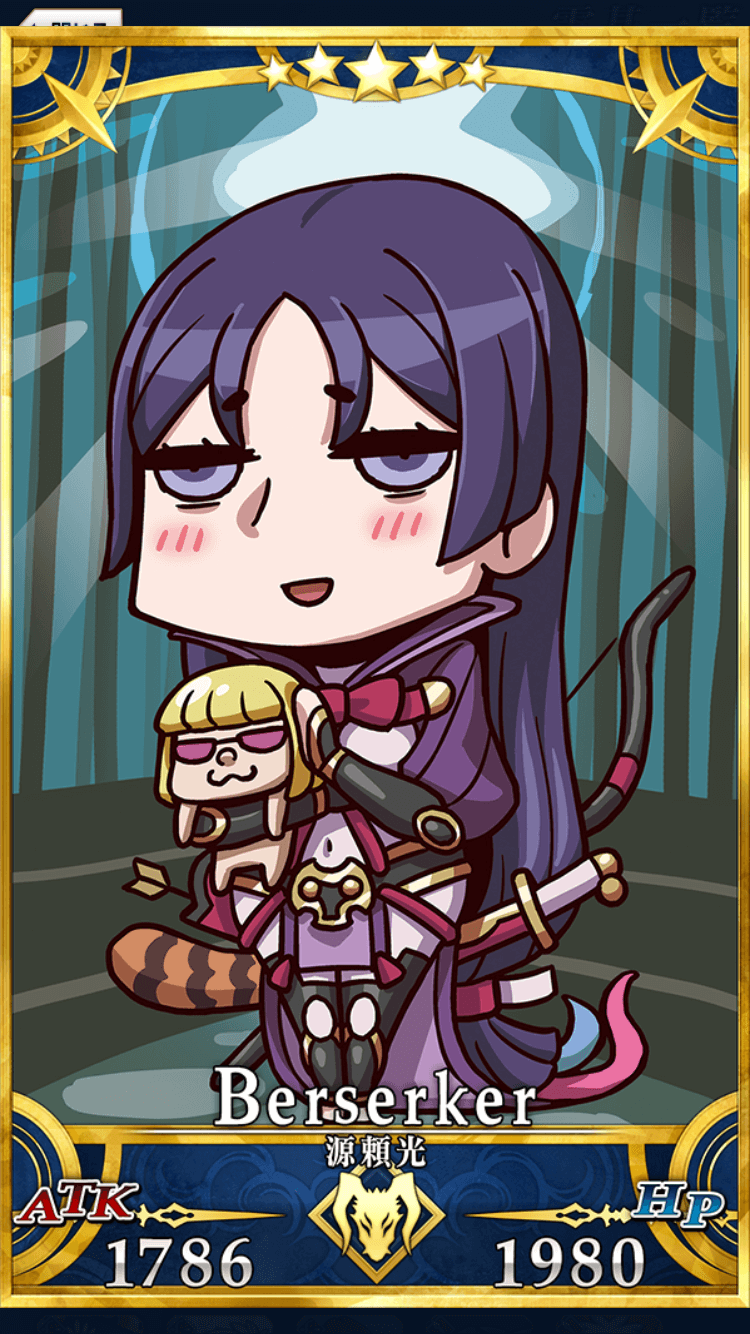 Replaces Eternal Arms Mastery A+ after Interlude 2. (Not available, ETA 6/2021)

Vengeful Lightning of the Ox-King B++

Vengeful Lightning of the Ox-King

When equipped on Minamoto-no-Raikou,
Increases party's Buster Card effectiveness by 10% and Critical Strength by 15% while she is on the field.

Befitting her name, the famed Mystic Slayer of the Heian era manifests in Fate / Grand Order with resounding thunder. There are very few Servants in the game that can boast potency in both farming and boss slaying, but Minamoto-no-Raikou can accomplish both with her overloaded Buster skill set, AoE Noble Phantasm, and fantastic firepower.

Raikou’s skill set is excellent with her Buster buff Mana Burst (Lightning) and Critical Star Gathering buff Eternal Arms Mastery firmly entrenching her as a reliable Buster Critical Damage Dealer Berserker. After completing her second Interlude, Raikou even gains a significant upgrade to her Eternal Arms Mastery, granting her a 60% boost to her Critical Damage for up to three Critical Hits, further empowering her damage output. What separates Raikou from her peers is her third skill: Mystic Slayer, which boasts immense coverage over a large roster of possible enemies and lasts for 3 turns. When combined with her Berserker class and AoE Noble Phantasm, it allows her to serve as an effective farmer against a wide array of enemies, as well as a boss slayer for many Challenge Quests featuring Earth or Sky Servants. In addition, the hit count on her NP is excellent, which allows her to generate a significant sum of Critical Stars via Overkill and its in-built Star Generation buff.

That being said, Raikou is definitely not without weaknesses. Being a Berserker, her survivability remains a problem in the face of high incoming damage. While her Mana Burst (Lightning) does offer her a one-turn dodge, it is also tied to her main card performance buff, meaning Masters often have to prioritize one aspect over the other. Furthermore, prior to her second Interlude, Raikou lacks a strong Critical Damage buff to make user of her massive Star Gathering buff, often relying on teammates and Craft Essences to provide this for her. Lastly, without the strong bonus trait damage from Mystic Slayer, her Noble Phantasm’s damage is rather lackluster, making her Noble Phantasm deal similar damage to Berserkers who are far cheaper to field.

All in all, while her prowess may vary depending on the enemies, Raikou is a highly versatile and effective damage dealer whose flaws can be perfectly adapted for with Buster supports. Indeed, few can match the Mystic Slayer in her prime.

Raikou’s base Noble Phantasm damage is not particularly astounding, but once boosted by her Mystic Slayer, it can plows through Earth and Sky Servants with ease. In addition, as many common enemies possess the Demonic trait, such as the Undead, Raikou is a great choice to bring against them.

Even when she is not doing Critical Damage, Raikou’s basic Command Cards deal a high amount of damage. Next to her skills, Raikou has access to a large amount of passives in the form of Divinity, Madness Enhancement and Riding, in addition to any active buffs from Mana Burst (Lightning) or Mystic Slayer.

Prior to dealing damage, Vengeful Lightning of the Ox-King grants a significant personal Star Generation buff based on Overcharge for 1 turn. As this Noble Phantasm has a high hit count (7 hits per enemy), Raikou will generate a large amount of Critical Stars upon using it against multiple enemies especially if Overkill is triggered. While this can make Raikou fairly self-sufficient, Masters still need to supplement her with additional critical stars to eliminate any random element in her critical potential.

At the end of the day, Raikou is still a Berserker. Even with an on-demand dodge tied into her Mana Burst (Lightning), her survivability is still quite sub-par. During challenging content Masters will often need to supply her with additional defenses, as without protection it is not rare to see her drop at a moment’s notice.

Until her second Interlude, Raikou does not have a strong Critical Damage buff to combine with Eternal Arms Mastery. This can be solved somewhat with support from teammates such as Andersen or Merlin, or via Craft Essences. Even after her second Interlude, the Critical Damage remains limited to 3 hits, which is often not enough given her Star Gathering lasts for 3 turns.

Against enemies unaffected by Mystic Slayer, Raikou’s Noble Phantasm damage is rather lackluster. Without an upgrade to her Noble Phantasm, and only a single steroid and Madness Enhancement EX, she is out-damaged at NP1 by many of the core cast of AoE Berserkers at NP5 such Eric or Kiyohime especially after factoring in addititional Attack from Craft Essences.

All of Raikou skills are strong and central to her identity as a versatile damage dealer. It is highly recommended that all Masters raise the skill level of all her skills to not only boost her potency, but also increase the frequency of her signature combo - a Noble Phantasm into a Critical Brave Chain.

Raikou’s flexibility allows her to run as either a farmer or a dedicated Buster Critical Damage Dealer. Generally it is best to leave her defenses for her teammates to cover and instead improve her offenses further. For farming, Starting NP Gauge is extremely desirable, as Raikou does not have an NP battery skill to immediately access her Noble Phantasm. Attack Up is her strongest offensive stat, as it scales multiplicatively with all of her steroids. Buster Performance Up and NP Damage Up are decent alternatives, but not as highly recommended as they stack additively with her Mana Burst (Lightning) and Mystic Slayer respectively. Critical Damage Up is the best stat to go for when Raikou acts mainly as a Critical Damage Dealer before her second Interlude, as she already has fantastic Critical Star Gathering in her kit.

If anyone has an Spare Guest Account with Ch'en?
@Hapuc wrote: (topic withdrawn by author, will be…
What's up with Shiki's NP?
@Mephala wrote: As of 10 minutes ago, I’ve got her at NP3…
Liz lancer or d'Eon?
@chan_aleg wrote: Who’s the “better” rare prism candidate?…
What do I need to enable Sieg?
@C-luck_dragon wrote: Pretty much every comp I see of him…
Posts your favorite fan-made alts here
@jakeyb wrote: There are a lot of variations of servants we…
Read More