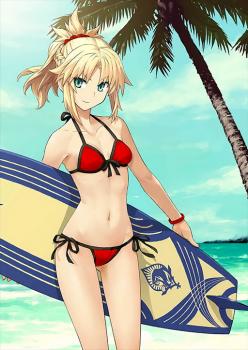 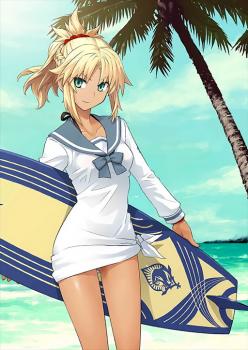 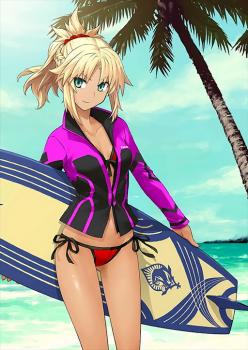 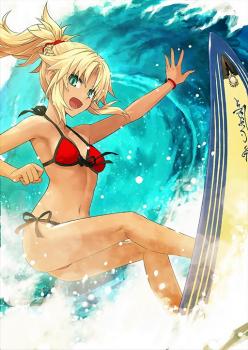 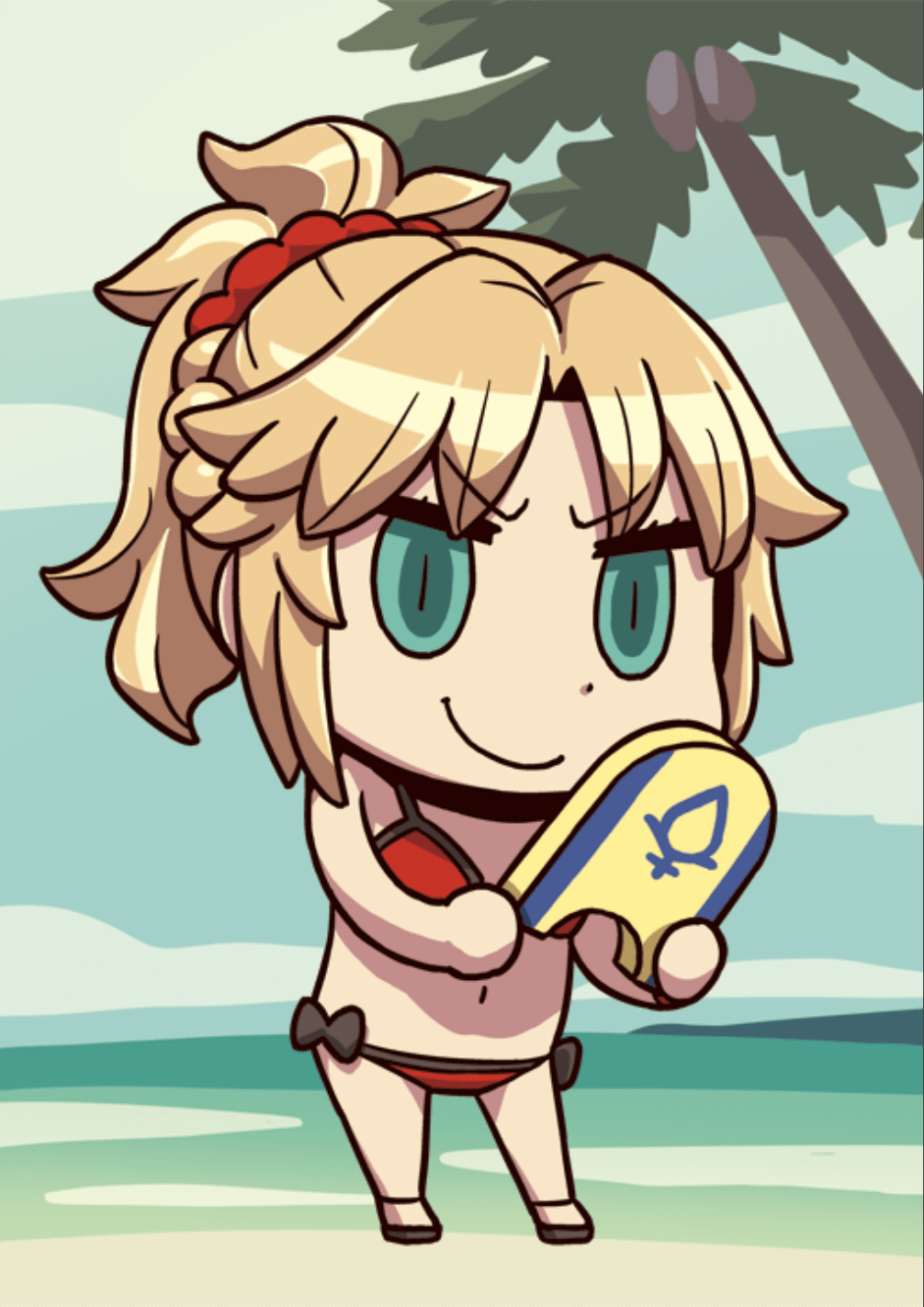 When equipped on Mordred (Rider),
Increase party's NP Strength by 20% while on the field.

"F-father?! I, no, this isn't Prydwen. It's just...a similar looking Noble Phantasm."

The Knight of Treachery (swimsuit edition) is an Arts AoE Rider with one intensive focus - Constant AoE NP spam.

While her base NP gain is somewhat low compared to the average for a servant with two 2-hit Arts cards, she more than compensates for it with the various Arts boosts provided by her kit, an NP gauge increase skill, and, most importantly, good hit counts on her NP. All these factors together allow Mordred Rider to receive a 43% NP gauge refund from her own kit when hitting a normal full 3 enemy wave with her NP, and even more with team assistance or an NPAA chain.

Mordred’s new look doesn’t end there, with two solid durability skills to keep her consistently on the field, and a little niche star generation buff to make her Arts-focused chains actually provide stars as well for further NP spamming. Still, unlocking her full NP spamming potential requires extensive Arts support and sufficient enemies to attack. Even then, her sheer burst damage is generally quite a bit lower than her peers.

Regardless, while Mordred Rider ultimately falls down to being a one-trick pony who relies on having 3 foes to constantly blast with Prydwen, she does it so incredibly well that it forces her into a powerful position for any Arts team.

Mordred Rider arguably has some of the best Arts NP spam in the game if she can get the right conditions, being able to completely refund her gauge back to 100% with her own kit and a solid NPQA or NPAA chain. She can manage more or less the same without any real assistance from her own cards if she has a combination of massive Arts or NP Gain buffs from Servants such as Tamamo, Nero (Bride) or a post Rank-Up Paracelsus. While the damage output of her NP isn’t spectacular in a single instance, the fact each one tends to lead into another very easily makes it more powerful than it initially appears. Most AoE NPs out-damage Mordred Rider’s, but few can so easily NP twice in succession like her's can.

With both an Evasion from Rodeo Flip and a guts from Endless Summer, Mordred Rider has no issues enduring the more threatening attacks she may face on a sortie. While both skills are on an absurd skill cooldown of 9 turns at base, most battles struggle to last long enough for them to come back off cooldown without using a stalling team (which, admittedly, Mordred Rider has good synergy with), so it isn’t as terrible as it may seem. She can endure any NP thrown at her, even if it has inherent Incinvibility Pierce, making her a very consistent damage dealer.

Prydwen Tube Riding packs a handy, while inconsistent, chance to reduce the NP gauge of every enemy hit by it, with the chance scaling with overcharge. This, combined with Mordred Rider’s Arts card focus and strong durability, makes her an excellent contributor to stalling teams, especially those facing off waves of 3 powerful servants with threatening NP gauges. The 50% chance to get the NP gauge drop may not be reliable, but all RNG falls to consistency, and Mordred Rider can absolutely manage to chain multiple NPs in the same battle consistently. As such, she remains a powerful damage dealing pick with some unique stalling power on the side.

In order to be able to do back-to-back NPs without getting an NPAA chain, Mordred Rider needs crits. To get back-to-back NPs without Crits, she needs Arts and/or NP Gain buffs. The point being, Mordred Rider ultimately needs something she can’t provide for herself if she wants to be able to NP spam consistently, since banking on drawing an NPAA chain is hardly reliable. As a result, she usually needs one, if not both, of her teammates to provide a supportive tool to her in some way, whether it’s NP gauge chargers from Waver, Arts buffs from Tamamo or critical stars from any sort of star generator. While Mordred technically performs fine solo, her performance with 2 teammates who don’t provide anything to her and steal both her card spots and critical stars isn’t so good.

Mordred Rider, while packing some offensive buffs to aid her damage output, still isn’t a force of nature in terms of raw high NP damage. Her kit certainly attempts to compensate for it with how easy it is to spam her NP, but sometimes one only has the resources or turns to get one NP off, and Masters want it to hit as hard as humanly possible. In both ST and AoE situations, Mordred Rider gets outclassed by competitors. While she still has impressive regular Arts card damage due to her Arts buff’s 3 turn duration, it doesn’t really tend to compensate for the vast gap in NP damage output.

Refunding Mordred's entire NP Bar is easier if Overkill is triggered after the first few hits. However, even with extensive support the lower level Mordred's Noble Phantasm is, the harder it is to clear the wave at all, let alone make use of Overkill in assisting a full NP refund. In effect, Mordred (Rider)'s farming power is greatly improved with additional copies.

Mordred (Rider) is primarily used for her farming potential, but Masters may find her AoE stalling useful for a few challenging AoE encounters as well. Either way, boosting her damage output and refund potential first is ideal, and Masters need to fully invest and maximize Cerulean Ride to be able to hit the damage and refund benchmarks necessary to pull of any NP looping.

To enable Mordred (Rider)'s NP spam, Masters need either Starting NP Gauge to jumpstart her first NP, Arts Performance Up for striking a balance between NP refunding and damage, and/or NP Gain Up to vastly boost her NP refunding as it stacks multiplicatively with Mordred's own Arts buffs. Masters can also aim to simply improve her damage output, for which both Attack Up and NP Damage Up work well.

Mordred is one of the prime candidates for 3-turn farming via Arts NP looping. However, creating a 3-turn looping team from scratch can be tricky, especially if options are limited. Masters can use the Command Chain Calculator tool to try and create an NP looping team, but the key points are: