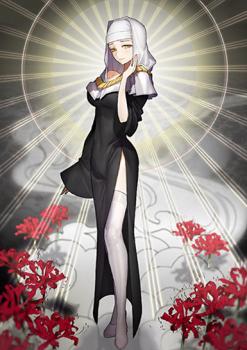 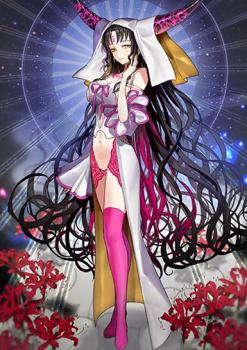 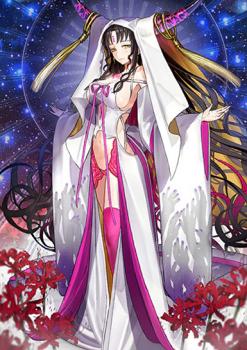 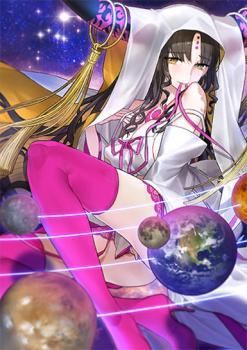 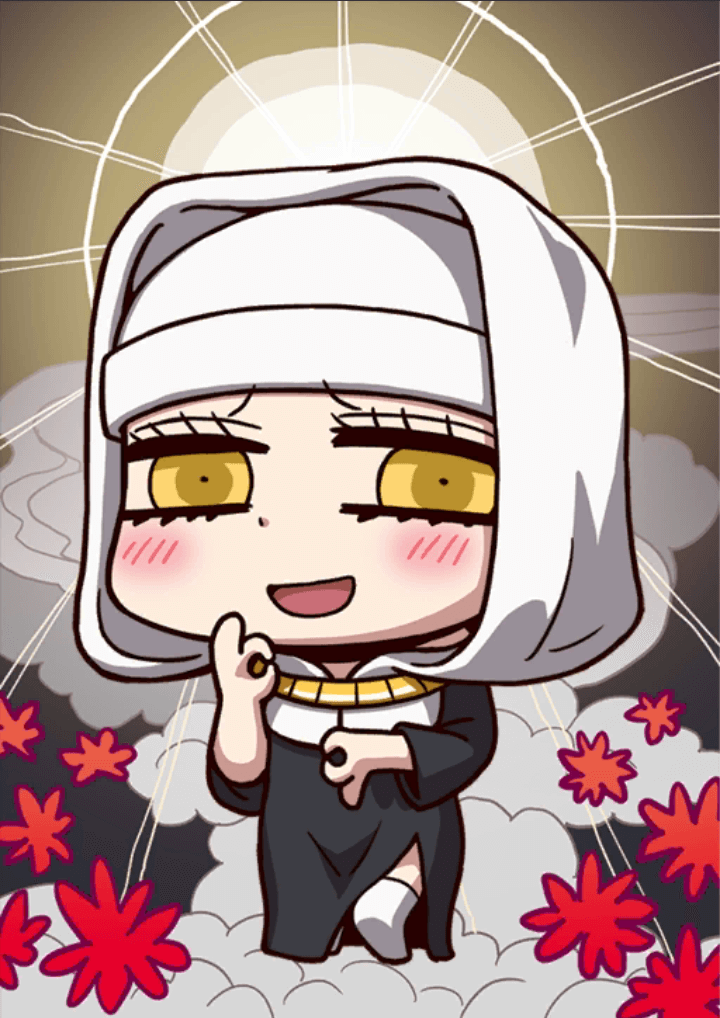 Heal Received Up Self Damage [Demerit]

Five Approaches to Meditation A

Decrease all enemies' Charge by 1.
Decrease DEF for all enemies (3 turns).

Five Approaches to Meditation A+

Upgrades after Rank Up Quest 2

Apply Special Defense [Humanoid] for yourself (DEF +16% against Humanoid enemies).

Apply Ignore Invincible for yourself (1 turn). [Activates first]
Deal damage to all enemies that ignores DEF Up.

Apply Ignore Invincible for yourself (1 turn). [Activates first]
Deal damage to all enemies that ignores DEF Up.

Dream From The Cradle

When equipped on Sessyoin Kiara,
Increase your Arts Card effectiveness by 20%.
Increase your Max HP by 3000.
Decrease all allies' (except self) Max HP by 1000 while she is on the field. [Demerit]

After several attempts to be the final boss of something, the Devilish Bodhisattva Kiara Sessyoin finally decides to aid Chaldea in an unexpected twist of fate. She is the third Servant of the Alter Ego class to join the fray, serving as a hybrid between an AoE Damage Dealer, a potent debuffer and a part-time Ruler killer.

Kiara’s main feature is her versatility. Capable of dealing bonus damage against six different classes, she functions as a useful option in many situations, especially for Masters with less developed rosters. Furthermore, her skill set and Noble Phantasm bring a vast amount of different useful effects, including teamwide versions of a Defense Debuff and an NP Drain, and a single target Debuff Resistance Debuff, which are all useful for Challenge Quests in particular. With a multi-hit AoE Arts Noble Phantasm and a 50% NP battery skill in Clairvoyance (Beast), Kiara is also capable of using her Noble Phantasm Heaven's Hole multiple times per battle, a useful perk for clearing waves. With her passive and third skill, she is also a surprisingly decent damage dealer for Arts Critical teams. Last but not least, Kiara’s survivability is significantly aided by on-demand Invincibility and the healing from her Noble Phantasm.

Regardless, versatile Servants often do not excel at all of their niches, and Kiara is no exception. For one, her damage pre-Rank Ups is generally mediocre, due to a combination of the Alter Ego’s unique Berserker-like 1.5x class advantage, ineffective damage output against Knight class enemies, and her lack of strong offensive self-buffs. It is often better to resort to using natural class counters for better survival and damage potential in single class enemy nodes. Kiara’s skills also have incredibly long cooldowns initially. This is a huge detriment in longer battles, though this weakness is greatly diminished after completing both of her skill Rank Ups.

Thus, even with her jam-packed skill set and ability to cover multiple roles at the same time, Kiara’s middling damage output puts a damper on her ability to remain competitive with other Servants with higher ceilings. Without her Rank Ups, she remains a decent stopgap option for farming and a capable Challenge Quest substitute for Masters with smaller rosters; with them, however, she sees huge jumps in her overall usefulness.

As an Alter Ego, Kiara will deal 1.5x damage against Riders, Casters, and Assassins, as well as the standard 2x damage against Berserkers and eventually Foreigners. Furthermore, Kiara’s passive Nega-Saver grants her a 1.5x damage bonus against Rulers as well. This makes Kiara a good candidate for taking on quests with enemies of different classes that otherwise may pose a problem to mono-class teams.

While her base NP gain per hit isn’t particularly outstanding, Kiara’s Clairvoyance (Beast) more than makes up for it with a standard 50% NP charge upon use. Furthermore, Heaven’s Hole has a high amount of hits for an AoE Arts Noble Phantasm, allowing for decent NP gauge refund. When used in conjunction with her 3rd skill Goddess Morph, it is not uncommon for her to release Heaven’s Hole twice in a row, especially if she gets support from Arts-centric buffers like Tamamo-no-Mae or Gilgamesh (Caster).

Goddess Morph grants an on-demand Invincibility buff that is highly valuable for survival. Furthermore, its HP demerit is offset by the fact that Heaven’s Hole also heals Kiara for a significant amount upon use. As she can use the latter more often than not, Kiara will often maintain a high amount of HP.

Kiara’s skill set offers various effects, including an AoE NP drain, Debuff Resistance and teamwide Defense debuffs, Ignore Invincibility and Ignore Defense. Her first Rank Up adds in a powerful 30% Arts Resistance Down debuff (basically an Arts Performance buff, but attached to the enemy like a Defense debuff) to her Clairvoyance (Beast), and after her second Rank Up Quest, Five Approaches to Meditation also gains an incredibly useful AoE Buff Removal effect that is immensely useful for many Challenge Quests. Furthermore both of these Rank Ups lower her skill cooldowns, reducing their cooldowns by an additional turn. All in all, Kiara can adapt to many situations thanks to these eclectic abilities, especially in high difficulty content.

Kiara’s damage leaves much to be desired due to several factors. Despite having a strong combination of passives, she lacks strong sustained self-buffs to make up for her Alter Ego modifiers. When facing enemies that she gains an advantage against, she will generally lose in terms of damage compared to Servants who naturally counter them (such as Assassins vs Riders) as Alter Ego and Nega-Saver only grant 1.5x bonus damage, not 2x like any normal class advantage bonus. Furthermore, her ineffective damage against Knight class enemies also lowers her damage output in quests that feature them. Her Noble Phantasm will similarly do middling damage until her first Rank Up Quest, which also boosts its refund potential.

Kiara’s skills all feature very long cooldowns even at max level. While they’re there to compensate for how powerful some effects on her skills are, they’re nevertheless a detriment in fights where she needs to use these skills more than once, and forces Masters to plan carefully around the uptime of these skills. Thankfully for Kiara, her skill upgrades also reduce the base cooldown for both Clairvoyance (Beast) and Five Approaches to Meditation, making her performance a lot more consistent in longer battles.

While Kiara can fill multiple roles, she will not particularly excel at any of those until her skill upgrades greatly boost her performance. Even after her skill upgrades, her lack of true specialization means that it will usually be more efficient for Masters with highly developed rosters to opt for more specialized Servants.

Kiara’s main damage comes from unleashing Heaven’s Hole as often as she can. Thanks to her great NP refund, spamming her NP is possible in most properly supported Arts-based teams. She will highly appreciate Craft Essences that grant Arts Performance Up, as three out of her six cards are Arts.

Starting NP Gauge is also a highly viable choice, allowing her to use her Noble Phantasm immediately upon the first turn when combined with Clairvoyance (Beast) or other NP chargers like Zhuge Liang or Helena Blavatsky.

Kiara’s damage scales very well with NP Damage buffs, a damage modifier which her skill set lacks. Her capacity to use back to back NPs allows her to benefit even more from improving the damage of her NP.

Prism Shop CE Overview and Tier List
My goal here is to create a (relatively) brief reference to help newer players make…
Upcoming GSSR Lucky Bag 2023 Summoning Campaign New Year Special targets?
Come New Years, NA will have a GSSR banners up: JP 2021, for reference As usual for…
Who are your 2023 (and 2024?) gacha targets?
As 2022 winds down, I’ve been looking ahead at future servants to understand how much…
Arts Reigns Supreme! - Interlude Campaign Part 15 Roll Thread
Interlude Campaign 15 has arrived, and with it we have 3 spectacular Arts Single…
Busti’s Stall Diary Chapter #572: Light & Darkness
One cannot live without the other. Light needs darkness as much as darkness needs…
Read More