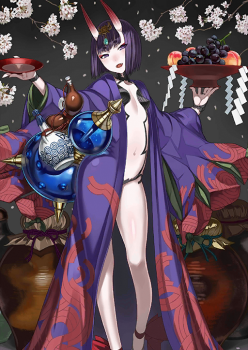 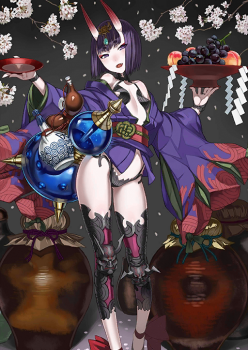 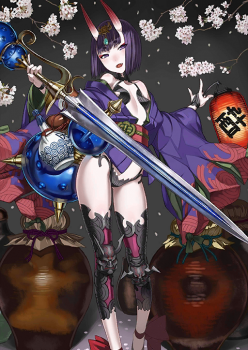 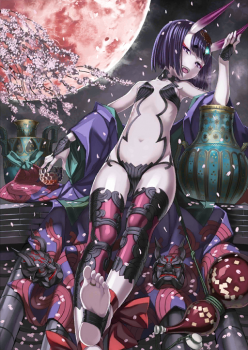 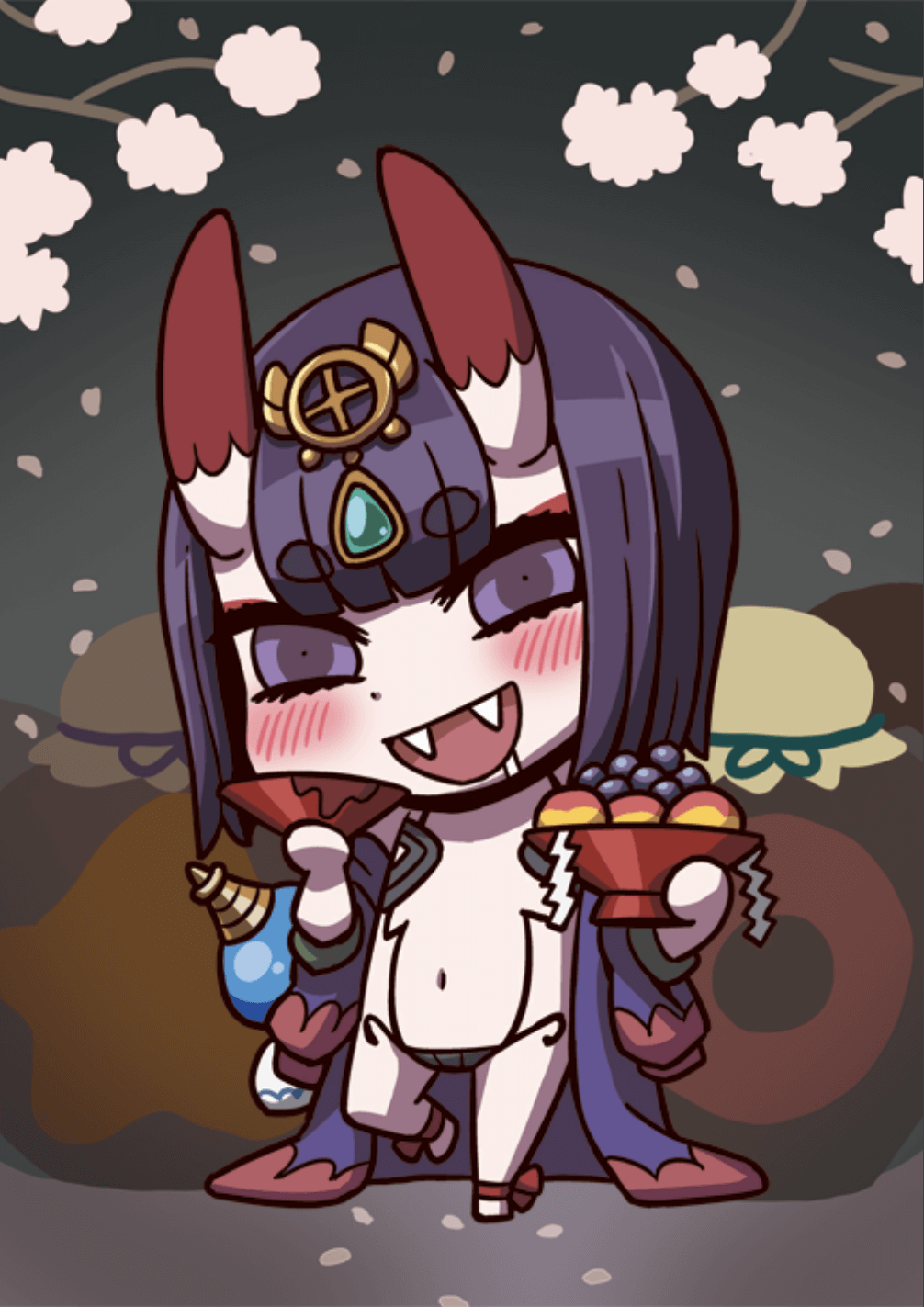 Intoxicating Aroma of Fruits A

Demonic Nature of Oni A

Apply Guts to self (1 time, 5 turns).
Increase own NP Gauge.

Inflict Poison for all enemies (5 turns).

Inflict Poison for all enemies (5 turns).

When equipped on Shuten-Douji,
Increases party's Quick and Arts Card effectiveness by 10% while she in on the field.

As drunk as they come, Shuten Douji, one of the big three yokai of Japanese legends, stumbles in with a sword in one hand and a bottle in the other. Surprisingly, the liquor doesn’t prevent her from being a strong AoE Arts Assassin who provides decent support for her teammates.

Shuten’s primary strength as a servant comes from the interplay between her powerful NP and her support skills. With a 3-turn 20% Attack buff from Demonic Nature of Oni and a 3-turn 20% Defense debuff from Intoxicating Aroma of Fruits, Shuten effectively provides a potent 40% Attack buff for 3 turns regardless of card type. These two skills alone, plus the 30% Noble Phantasm damage up on Demonic Nature of Oni, lead to Shuten having a hard-hitting AoE useful for clearing waves, especially post Rank Up. Her Noble Phantasm further serves as additional support and utility, decreasing enemy’s Debuff Resist, Defense, Attack, NP Strength, Critical Rate, and inflicting Skill Seal. Lastly, although somewhat unreliable, Shuten also has a 60% chance to inflict Charm to all enemies (of any enemy type) via Intoxicating Aroma of Fruits, which helps stall and indirectly reduce the amount of enemy attacks.

Unfortunately, Shuten is not a heavy damage dealer herself outside of her NP. With her standard 0.9x Assassin modifier and a QQAAB deck, her basic card damage falls on the lower end despite a high base Attack stat. In addition, her NP gain is mediocre, and she will have to rely on Arts Chains and CEs to charge her NP bar effectively. Furthermore, Arts Assassins in general have issues as the supports who can best help them with Art Chains and Arts buffs, Casters, are weak to their favored opponents, Riders. Shuten is also relatively fragile, having to rely on a single guts skill, Battle Continuation, for survivability.

On the right team, Shuten can shine through with her impressive utility and support. As long as one is not reliant on her Charm skill for anything more than damage reduction, Masters will find themselves quite satisfied using this hard-drinking yokai with a charming voice.

Shuten’s NP benefits from a plethora of damage buffs, with a combination of up to 20% Attack up, 20% Defense down, and 30% self NP Damage up. These buffs start stacking up particularly well after Shuten’s Rank Up Quests, as her NP Damage will start rivaling that of the strongest AoE Servants.

With Demonic Nature of Oni and Intoxicating Aroma of Fruits, Shuten is capable of increasing the entire team’s damage for 3 turns by 40% regardless of card type. She also offers a plethora of debuffs on her Noble Phantasm, capable of mitigating enemy damage. By decreasing Debuff Resistance, Attack, and NP Damage, Shuten allows a better chance for her allies to survive incoming attacks and stall enemies.

What makes Shuten unique is her ability to charm all enemies regardless of type. While this is a chance-based ability, it can help mitigate incoming damage. She also can inflict Skill Seal on her enemies with her Noble Phantasm, avoiding costly random elements like enemy servants using charge skills to get to unleash their NP. The poison damage on her Noble Phantasm, especially after her Rank Up, will also provide a constant damage over time, which may be useful in certain challenge quests where normal damage is highly reduced.

As a Servant, Shuten is a Dragon, Female, Evil, and Divine. These traits allow Shuten to be doubly buffed when paired with multiple servants that boost Attack and further boost Attack based off of certain traits.

As an Assassin, Shuten suffers from the class 0.9x damage modifier in the worst way possible. With no passives to notably boost her damage, her cards in general fail to generate much damage. In addition, her QQAAB deck is more focused on NP generation than damage or Critical damage, lowering her overall output.

While Shuten has a decent Extra card with 6 hits, her other cards do not perform as well for her. With her low-ish NP gain, her 3-hit Arts cards in particular are below average in performance. Additionally, as she has access to only two Quick cards, Shuten's star generation isn't very strong for an Assassin.

Shuten’s role as an Arts AoE Assassin complicates matters when building a team around her. Most servants who would support her to compensate for her weaknesses are Casters, meaning they are weak against the Riders Shuten has class advantage against. With her NP gain being a sticking point, and with no NP battery of her own, she often finds herself supporting more than being supported.

In most teams, Shuten’s primary roles are to support her party’s damage and deal damage herself. As such, Demonic Nature of Oni and Toxic Aroma of Fruits are great options to maximize, as both increase party damage. Her Battle Continuation modifies nothing except for revival HP on her guts, and as such should be leveled last and does not necessarily warrant maxing.

Shuten’s biggest needs stem from her mediocre NP Gain and low card damage. A CE which boosts Stating NP Gauge can compensate for her first NP. In longer fights, a hybrid Starting NP Gauge CE can help with both damage and getting her first bar filled. In addition, her NP gain can be compensated somewhat with an Arts Performance Up CE, which will also stack multiplicatively damage-wise with her skills. Alternatively, if focusing on her support role, a Critical Star Per Turn CE can supplement her general support to the team.