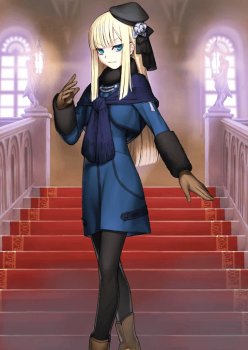 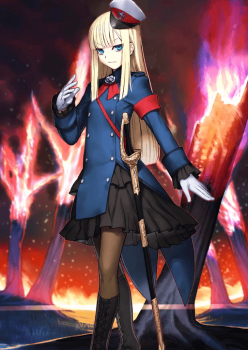 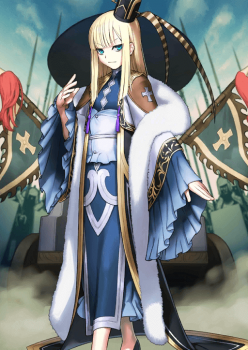 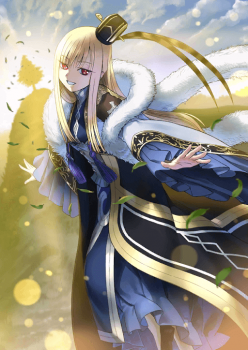 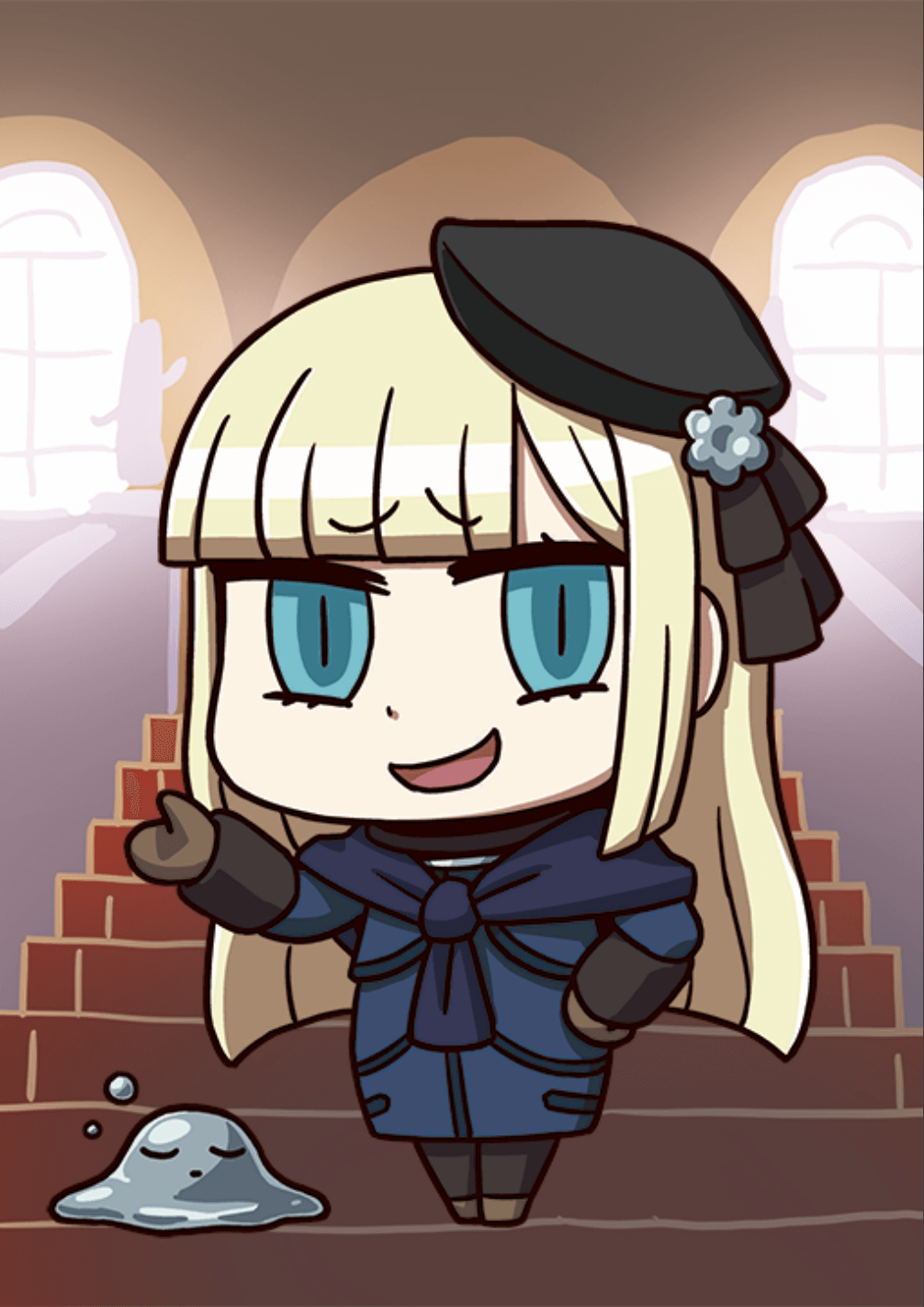 ATK Support Self ATK Down [Demerit]

Decrease DEF for all enemies (3 turns).
Apply Ignore Class Disadvantage when receiving damage to all allies (3 turns).
Remove own debuffs.

When equipped on Sima Yi (Reines),
Increase all allies' Arts Card effectiveness by 15% when she is on the field.

"Why do I call you my pupil, you ask? Well now, I wonder -- perhaps in the past, or in the future, or in some variant world, you were my apprentice.”

The great Romance of the Three Kingdoms tactician Sima Yi combines with Reines El-Melloi Archisorte to form a Pseudo-Servant who is as strange conceptually as she is mechanically. Unlike with most Pseudo-Servants, both Reines and Sima Yi are fully conscious and are able to separately comment on battles as they progress, and Reines brings her mercury maid Mystic Code Trimmau along for the ride as well. Reines is a generalist support Arts Rider capable of enabling any type of team, and while her buffs are less powerful overall than the dedicated card-type supports, she has the unique ability to nullify defensive class disadvantage.

Reines’s Attack- and Defense-boosting skills are general buffs useful in almost all situations, and both skills come with NP Charge effects. She also has a targetable 2-hit Invincibility skill, which gains an NP Charge effect upon her upgrade, and her NP reduces the enemies’ Critical Attack Chance, meaning Reines is also effective at protecting her team from enemy basic attacks. The centerpiece of Reines’s NP, though, is its ability to negate defensive class disadvantage for your team, which is particularly useful for eliminating the core disadvantage of Berserker-class Servants.

Unfortunately, Reines’s offensive support is limited to Attack buffs and Defense debuffs, which hinders her ability to boost party damage. Her lack of synergy with Critical-attack-focused Servants is particularly damaging, as her Rider-class Star Weight means it will be difficult for Servants to ensure Critical hits without Star Gathering skills of their own. Additionally, Reines has no way to delay or reliably avoid enemy NPs, which means she will not be able to keep her team alive through prolonged fights.

Altogether, Reines has a lot of nice support tools, but she lacks depth in her damage-boosting options and cannot protect against enemy NPs beyond her single target invincibility skill. This, combined with her class, will leave her as a less attractive pick for general use than the top-level support Servants until her eventual skill upgrade. After her upgrade, however, she competes with top-level supports. Even prior to her strengthening, however, she can still be quite powerful as a specialist in certain teams, particularly when using her NP to protect Berserkers from enemy attacks, or when boosting attack damage for fast-moving teams.

Reines’s Arts cards have significantly higher NP gain than the Arts cards of many Servants with single-Arts card decks. She also has Territory Creation to boost this further, meaning Reines can quickly refill her NP gauge, especially with Criticals involved. It is fairly easy for Reines to ensure her NP is always in effect if her Arts cards are prioritized.

Defense boosts, Attack boosts, and NP charge skills are useful for any type of team. Unlike with more specialized support Servants, Reines’s support is broad enough to allow her to fit into teams of any card type (much like Zhuge Liang), which ensures that she can be helpful in any situation where her unique class advantage utility is valuable. Additionally, one she receives her skill upgrade, she becomes able to charge an ally’s NP gauge by 50%, which is among the most useful supportive effects in the game.

Reines’s ability to negate defensive class disadvantage is ultimately what sets her apart. A Berserker protected by Reines deals bonus damage to nearly everything while circumventing the class’s usual defensive penalties, essentially turning the Berserker into a better Alter Ego. This can also be useful when fighting against Berserkers, as enemy Berserkers are usually balanced around their higher basic attack damage.Thus, Reines can take the edge off what would otherwise be a difficult fight.

As one final note, this also makes Reines valuable for fighting Foreigners, as Foreigners have offensive class advantage against one another. Reines can protect an allied Foreigner in order to maintain the offensive bonus without worrying about the defensive penalty.

Due to her high innate Star Weight, Reines will tend to take Critical Stars from her allies. This will not be a significant issue for Servants with high Star Gathering boosts or for Berserkers who are unlikely to be able to land Critical attacks anyway. However, for certain Servants -- particularly offensive Archers or Riders who rely on their naturally high Star Absorption values -- Reines’s star weight will cause issues in critical reliability.

While Reines has a number of ways to protect her team from standard enemy attacks, she will not be able to protect the party from enemy AoE NPs without significant planning. Supreme Mystic Code: Volumen Hydragyrum can protect one Servant, but it will not be enough to sustain a team for long fights.

Reines’s damage support options are limited in depth relative to most fully supportive servants. Her primary Attack boost and NP charge only benefits one Servant and it is limited by its cooldown, while her Defense debuff requires her to use her NP, which makes it sub-optimal for farming purposes. Before her strengthening, defense is Reines’s focus, but when offensive enabling is necessary Reines may fall short. Additionally, even in fast-moving teams, Reines’s value drops considerably after the first few turns.

As Reines is a defense-focused support servant, Tactician’s Advice should be leveled first. Emperor Xuan’s Command is also a valuable skill, but only the attack buff scales with levels and it only affects one Servant, so it can wait until after the former skill is leveled. Supreme Mystic Code: Volumen Hydrargyrum gains little from levels aside from the cooldown reduction (until its strengthening), so it should be saved for last. Masters should aim to fully level all three of Reines’s skills, as she is a support servant and her value is dependent on her ability to assist other servants with her skills and NP. Furthermore she will need her skill levels maxed in order to reach her full potential as a top-level supportive Servant after her strengthening.

When Reines is supporting Servants who do not need Critical Stars, she may benefit from CEs that provide NP Gain Up to facilitate her own support functionality, or from CEs that provide Starting NP Gauge so that Reines can activate her defensive class disadvantage protection as soon as possible. If Reines is supporting a Servant who does want to be dealing Critical damage, it is important for her to carry a CE that provides Passive Star Generation in order to offset the difficulties presented by her high innate Star Absorption.

When Reines is protecting others against defensive class disadvantage, it is important for her to keep her NP active as much as possible. However, as Reines prefers to use her NP charge skills to support her allies, she  is dependent on her (quite powerful) Arts cards for NP gain, which means she should be using her Arts cards any time they appear. This should not be particularly difficult, but it does limit flexibility in terms of team card selection and may require prioritizing Reines’s cards over a higher-damage Brave Chain from another Servant. Masters will need to assess whether the enhanced stability from maintaining Reines’s NP is more valuable than the potential burst damage available from prioritizing damage-oriented Servant’s cards.

A military general and politician of the Three Kingdoms who was posthumously given the title of emperor.

...Or that's who she's supposed to be. Just like her rival and fellow tactician, she has manifested by using a certain mage girl's body as a vessel.

"While it is logical to yield one's consciousness to the vessel in order to operate here in the modern world... Aren't you being a little TOO logical?"

The girl who acts as the vessel, Reines, is the original Lord of the El-Melloi family, one of the twelve families that operate the Mage's Association.

Under normal circumstances, she would have succeeded the previous holder of the Lord title. However, considering her age and the ensuing power struggle...as well as for Reines's own personal amusement, she transferred her position to Lord El-Melloi II. She has since taken to playing the mastermind in the background.

Upon becoming a Pseudo-Servant, Sima Yi left all operations in the modern world to the vessel, much like Zhuge Liang. However, unlike Zhuge Liang, who is more open-minded and rational, Sima Yi often rises to the surface.

Emperor Xuan's Command: A
A variation of the "Tactician's Command" skill given to Servants who were master tacticians. As Sima Yi was a usurper of authority, and because he was posthumously awarded the title of Ancestral Emperor Xuan of the Jin dynasty, the tactician and emperor skills have fused together.

Supreme Mystic Code, Volumen Hydrargyrum: B
One of the supreme Mystic Codes from the El-Melloi family of the Clock Tower's twelve houses. Expandable and elastic, it can transform into a powerful sword or impregnable armor capable of reinforcing its wearer's abilities. It can even turn into a maid composed of mercury if necessary. This ability originates from Reines, not Sima Yi. Her precise command of Volumen Hydrargyrum is said to exceed even her predecessor's. It is thanks to this Code that her STR is boosted up to B Rank.

Its proper name is the "Formation of Primordial Chaos". It is not in Sima Yi's nature to come up with cunning strategies. Whether it be during war or a power struggle, Sima Yi will position forces cleverly, will wait patiently, will win naturally, and will mutter some poetry that they detest while looking sullen.

When the illusory sun and moon appear from the horizon, the opponents will lose all advantage and instead have their hidden weaknesses exposed. As long as proper conditions align, such as if it is someone they have already defeated, or if the opponent's data has already been collected, this Noble Phantasm becomes a devastating strategy that creates weaknesses in the user's opponents.

This is what brought Reines to Chaldea, and since she was the de facto Lord of the Clock Tower given a tremendous responsibility of her own, she is quite sympathetic to Master, who suddenly had the burden of being humanity's last Master thrust upon them. She typically enjoys Master's predicament, but when things are at their worst, Sima Yi's abilities are sure to make her a truly powerful ally.