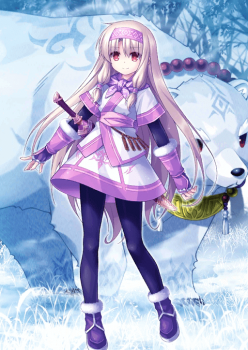 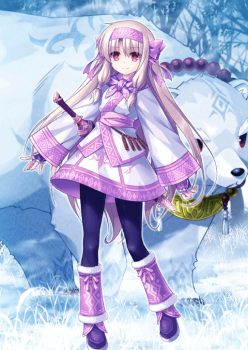 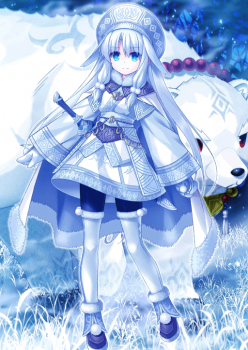 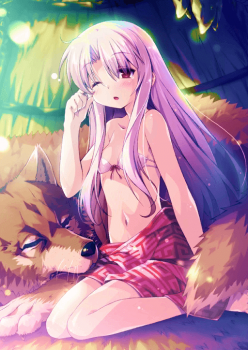 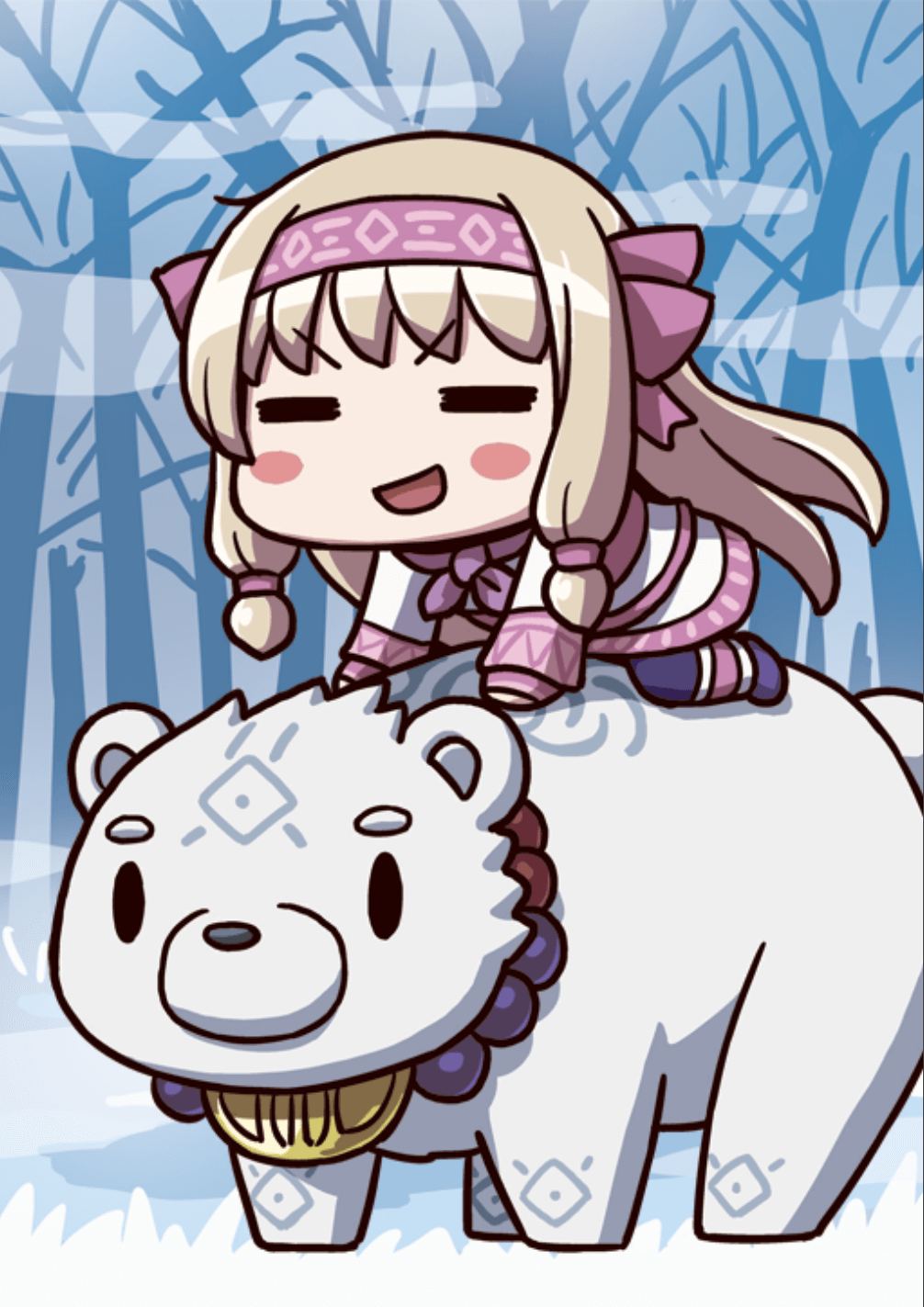 Apply Invincible to self (1 turn).
Apply Damage Cut to all allies (3 times, 3 turns).

Deals damage to a single enemy.
Decrease Charge for a [Dragon] enemy by 1.

Roar, My Friend, My Strength

When equipped on Sitonai,
Increase all allies' Arts Card effectiveness and NP Damage by 10% when she is on the field.

“It feels weird to call someone master.”

What happens when one combines the Ainu Sitonai, the Finnish Louhi, and the Norse Freyja into one Servant? An adorable loli with a polar bear, that’s what! Sitonai serves as a single target Arts Servant, and is also the first non-limited Alter Ego Servant for Masters to summon.

Sitonai’s primary usage comes from her sustained damage. Having both a 3-turn Attack Up on Kamuy Yukar A and a 3-turn Arts Up on Emotional Freezing B, both with relatively low cooldowns, she can keep her Card damage higher for a longer time. She also has some nice survival options such as her invincibility on Snow Fairy EX. A 30% NP charge on Kamuy Yukar also provides her with easier access to her Noble Phantasm.

While she is incredibly cute, she is still incredibly lacking the umph that her Caster counterpart, Illya, has. Her damage is severely lacking due to her class typing, making her worse than many freely available options with respect to Noble Phantasm strength. She also suffers from poor durability when she does not have her hard survival skill up. To make matters worse, as an Illya-type Servant, she has to deal with chance based skills.

Masters looking for a non-limited Alter Ego would be best served to roll for her, and will find her most effective in roles against Cavalry and Foreigner Bosses. The loli goddess conglomerate will not disappoint.

Sitonai comes equipped with two 3-turn damage boosts - one for her Arts and one for her Attack. This not only will allow her to hit harder on non-Noble Phantasm turns, but also to improve her (rather poor) base NP gain.

Sitonai has two survivability tools up her sleeve - an Invincibility on a 6-turn cooldown, and her Noble Phantasm which causes a Dragon Enemy to lose one tick of their gauge. These hard survival options could help her last even longer in some challenging quests.

There is a huge difference in Fate / Grand Order between a 20% and a 30% charge, with a 30% allowing a Servant to use their Noble Phantasm with a 50% starting CE and either a Mage’s Association mystic code, or one of the many 20% gauge chargers.

(Plus a Polar Bear)

The best usage of an Alter Ego in the game is due to their ability to counter waves of Cavalry opponents of mixed classes. However, without an AoE Noble Phantasm, they are almost always outdone damage-wise by a regular counter-class. Sitonai is no exception, as her Noble Phantasm struggles to keep up with Noble Phantasms of many lower-rarity counter classes. The only time she does benefit from double damage where no other class would is against Foreigners, which are very rare as an enemy type.

As an Alter Ego, Sitonai will receive neutral damage against all classes except Berserker (1.5x) and Foreigner (0.5x). While she has her hard survival skill, she will often be taking far more damage than she would against class advantage. One or two poorly timed Critical hits in more challenging quests could wipe her out prematurely.

All Illya Servants have a skill based on chance, designed to incorporate Miyu or Chloe into the fight to buff her back up to full. Sitonai has a particularly brutal one, losing her 20% Attack up should the Chance Based skill miss, harming her already mediocre damage.

As a damaging Servant, Sitonai should primarily focus on skills which damage her enemy. Both her 2nd and 3rd skill should be leveled high (with her 3rd to 10 for the full 30% gauge), but her first skill fails to benefit significantly from leveling and can hence be left at minimal levels.

Like most damaging Servants, Sitonai works well with Starting NP Gauge CEs or Hybrid Starting Gauge / Damage CEs. Without either she could benefit from a Buff Success Up CE to minimize her chance of failing to maximize her damage.

While Sitonai can be effectively used against any Cavalry class, she is best used against Casters with Ozymandias. Ozymandias has the capability to both give her the 20% charge to complete her gauge (50% base from CEs + 30% self charge + 20% Ozy charge), as well as remove the chance-based element of her third skill with the +40% Buff Rate Success buff.

This Heroic Spirit is a fusion of several Divine Spirits all in the body of a certain girl with a close connection to the Holy Grail. How exactly this was accomplished is similar to the summoning of Pseudo-Servants like Zhuge Liang, although her particular manifestation combines characteristics of a High Servant (a compounding of multiple heroes) and an Alter Ego (the distillation of a certain personality facet).

The one who became the vessel was not a human mage, but rather the latest model of homunculus created by the Einzberns. Her enormous Command Spell covered her entire body, her talent in magecraft was top class, and her abilities as a Master were even greater. In addition, she also functioned as the container of the Lesser Grail.

The True Name recorded for her Spirit Origin is "Sitonai," as she is the most prominent of the three Divine Spirits gathered in this vessel.

A girl with an innocent smile. And yet, she hides an immeasurably cruel side as well. Her personality is indeed quite similar to the homunculus who serves as her body. The bravery that lets her fight so uncharacteristically for a girl her age comes from the Ainu's young heroine Sitonai. Her sympathy and melancholy towards those for whom she has deep affection comes from the goddess Freyja. The iron will that lets her murder enemies in cold blood comes from the witch Louhi.

...At least it's easy to attribute all these various aspects of her personality to the goddesses that fused to create this Alter Ego, but for now, her general personality comes from her vessel.

Snow Fairy: EX
The evolved form of the skill "Child of Nature."
So long as the user believes her target must be attacked, even loved ones are not safe from this icy cold. This ability freezes all nearby targets.

Frozen Emotion: B
Chilled empathy. Indifference.
The mindset of an innocent, smiling girl who is capable of turning on a dime, becoming a vicious demon...weaponized. An ice-cold heart can sometimes be a sword, and at others, armor.

Kamuy Yukar: A
An epic song in which the performer plays the part of the Kamuy. As an Alter Ego, performing Kamuy Yukar enables her to borrow many of the Kamuy's powers described in Ainu myth. Even the powers related to the higher-ranked Kamuy, Pase Kamuy of the mountains, village, and open sea, can be used.

Red Gold: B++
A skill related to the Norse goddess Freyja.
Even though Freyja enthralled various deities and even enemy giants, she loved only one person. When her loved one left on a journey, Freyja was said to have wept tears of red gold out of concern for his welfare.
This skill is typically not used in this game.

Howl My Friend, My Power.
The hunting dog who served as companion to Sitonai, the girl hero of Ainu, became a kind of familiar. Louhi and Freyja's magecraft from the Age of Gods strengthened it, and now it appears more like a large bear instead of a hound, making it closer to a spirit.

"A familiar for a goddess should be massive, and it wouldn't be fitting if it was some Demonic Beast or Phantasmal."

...That's what Louhi said anyway, and Freyja agreed. So with two out of three votes, the familiar became a bear.

This Noble Phantasm is continuously active. When its True Name is revealed, the familiar releases a series of vicious attacks before Sitonai fires an arrow imbued with icy magical energy at the target. Sitonai's characteristics triggers a special effect against dragons.

Revealed after completing a certain quest.