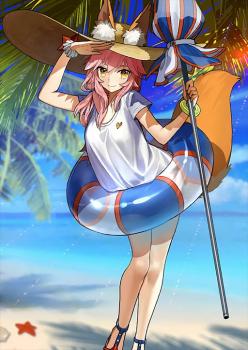 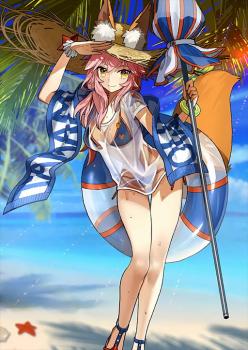 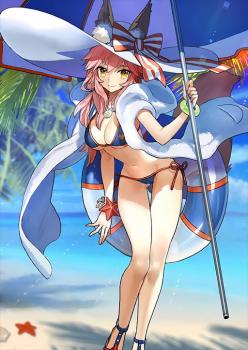 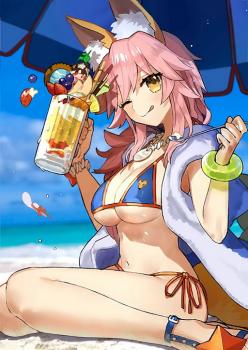 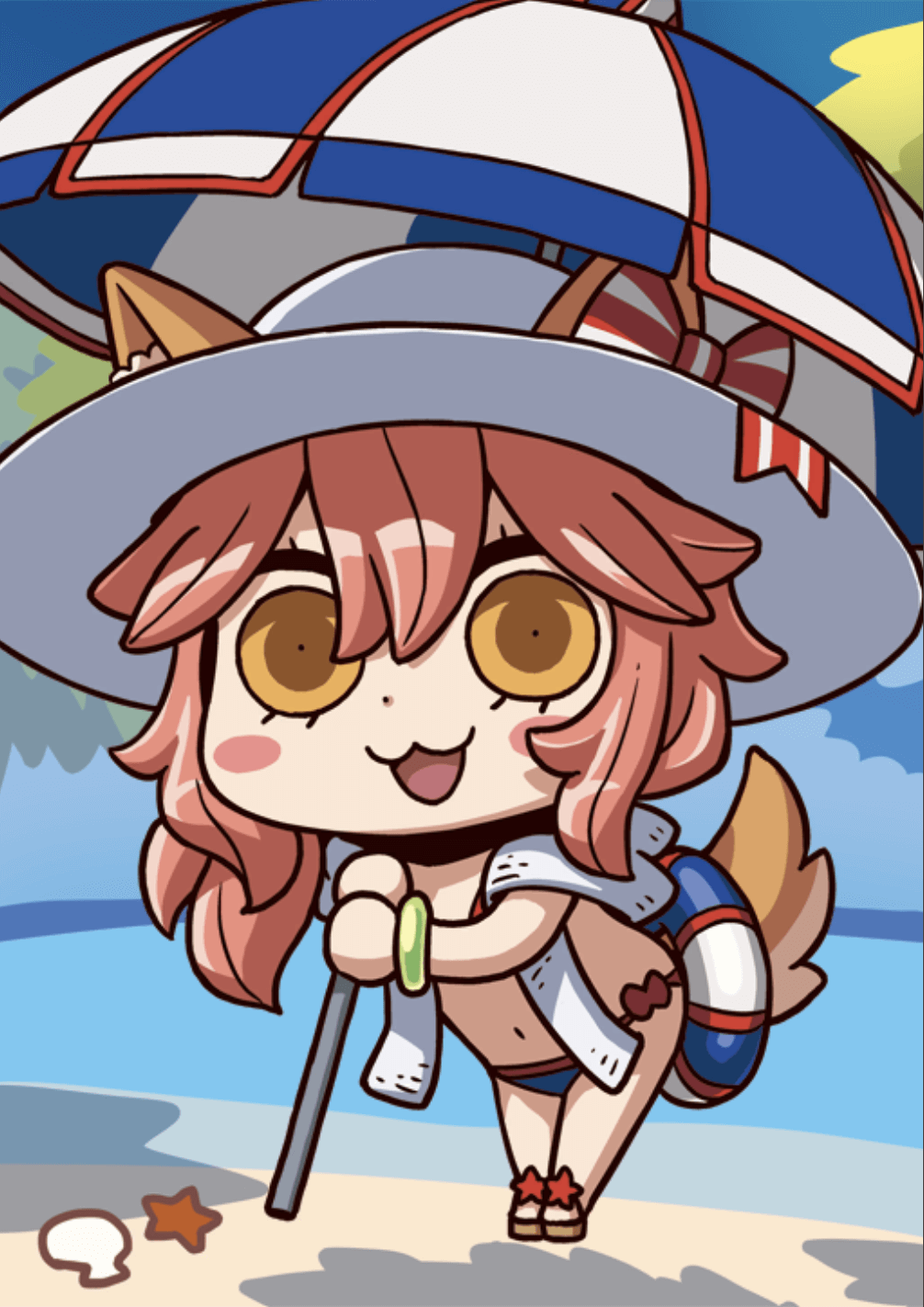 Heal Received Up Self Stun [Demerit]

Apply Damage Plus for yourself (Total Card Damage +230).

When equipped on Tamamo-no-Mae (Lancer),
Increase Party's Quick and Buster Card effectiveness by 10% while she's on the field.

“It's time for Beast Mode! Tamamo is full throttle now!”

As the aspect of the sun transformed into a Summer Beauty, Tamamo-no-Mae (Lancer) changes her attire and Saint Graph to join the Lancer class wielding a… parasol? Befitting her sunny yet capricious disposition, Tamamo Lancer's skills have powerful payoffs with potentially punishing demerits, while her strong command cards and anti-male Buster ST NP enable her to destroy any unfaithful male.

An aspect of Tamamo that immediately stands out are her combination of excellent hit counts, passives, and generation stats on her Command Cards, providing her with both high NP gain and critical potential. Additionally, Tamamo's skills have powerful effects that can turn the tide of battle, such as a high hit rate charm and an overkill of buffs tied to her Goddess Morph. Lastly, Tamamo's Anti-male NP covers an immense amount of (non-Servant) male enemies in addition to the rather common male Archer and Berserker bosses in the game. With her Anti-male in effect, Tamamo deals strong damage even with neutral class advantage.

While by no means a useless goddess, this fox's skills do have some monkey paw qualities. Midsummer Curse's charm and defense down also charges the enemy's NP Bar, while Goddess Morph has a delayed one-turn stun to compensate for all its buffs, forcing Masters to plan ahead or bring debuff immunity or cleanses. The total effect of these demerits is that against powerful bosses, Tamamo's skills cannot always be used at full uptime and often need to be planned for use on specific turns. In addition, the variety of buffs attached to Goddess Morph also creates an opportunity cost as Masters may need to time it strictly for defensive or offensive purposes respectively.

Either way, although Tamamo might have changed clothes and class, she is still a very powerful Servant when well-commanded. With proper team support, she can send powerful males (especially male Archers) on a permanent Summer Vacation.

With an amazing base NP generation per hit and high hit counts on her Quick cards, Summer Tamamo’s card performance is simply divine A well-timed AQQ chain can easily replenish a vast portion of her NP gauge, allowing her to use her Noble Phantasm multiple times per battle. Goddess Morph also adds a sizable buff to her NP Generation for 1 turn, but timing it may be difficult considering its stun demerit.

Tamamo’s Noble Phantasm packs a powerful overcharge effect that gives her a unique niche as an anti-male Lancer. Due to the frequency of male Archer or Berserker bosses as well as being a common trait on stronger mobs like Knight Enforcers, this effect has a wide application and ensures she stays relevant throughout the game.

Thanks to her Riding, Goddess Morph and high hit-count Quick cards, Tamamo can generate a decent sum of Critical Stars to support her team and herself. While the number is not enough to make her a dedicated critical engine for the team, it is enough to make her fairly self-sufficient over the course of battle.

With Beach Flower and Midsummer Curse, Summer Tamamo has several tools at her disposal to improve the team’s performance. Beach Flower is a universally good Attack Up for the team, with a powerful Star Generation buff component for male allies, while Midsummer Curse packs a targetable Charm to stall with (if timed right) as well as a hefty Defense Down.

Aside from Beach Flower, Tamamo's skills require some planning to use properly given their demerits often causing them to have a lower uptime than is optimal. Midsummer Curse’s enemy NP charge demerit often requires Masters to either burst the enemy down immediately before they can NP, or save it for when the enemy's NP bar is completely filled. This is especially notable versus Archer bosses, who require only 3 turns to charge their NP.

Similarly, Goddess Morph packs a lot of powerful self-buffs that can be used for multiple purposes, including boosting her survivability, but its self-stun component requires careful planning by predicting upcoming card draws(See Gameplay Tip on Ishtar's Profile) or an ally/Mystic Code with cleansing or Debuff Immunity capability.

Goddess Morph features a variety of buffs at 50% strength, notably Critical Damage, NP Generation, and Critical Star Generation. With all these powerful buffs, it's very tempting to use it for offensive turns for a "final push." However, these buffs are also tied to her Invincibility, often forcing Masters to choose between a push in offense or defense. In addition, Masters may choose a less than optimal ally/CE/Mystic Code to be able to negate its stun component.

Prioritizing Tamamo's skills is rather straightforward despite the demerits on each one, and it helps to keep in mind her ideal role as an Anti-male Boss DPS Servant. Thus, she benefits most from offensive buffs that will enable her to deal with large threats quickly, with a secondary focus on survivability for dealing with Boss NPs.

Similar to her skills, Tamamo prefers Craft Essences that can enhance her ability to deal damage against bosses, with ideally a Buster focus. Thus, Buster Performance Up and Critical Damage Up are almost always useful. Additionally NP Damage Up works well for bursting bosses along with Starting NP Gauge, especially as Tamamo's anti-trait buff scales multiplicatively with all buff types. Alternatively, Tamamo can use a Craft Essence with Debuff Immunity in order to remove the demerit on Goddess Morph, or focus on NP Generation instead.