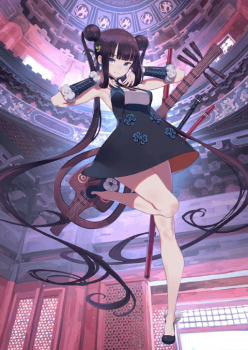 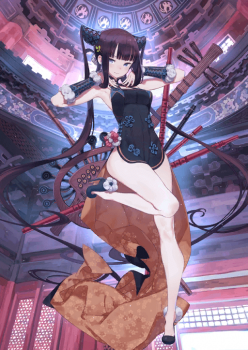 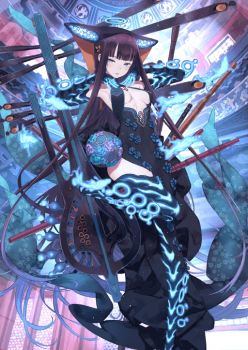 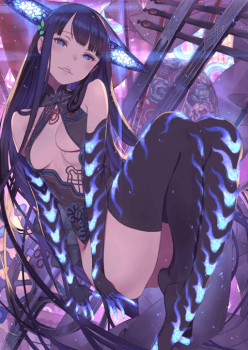 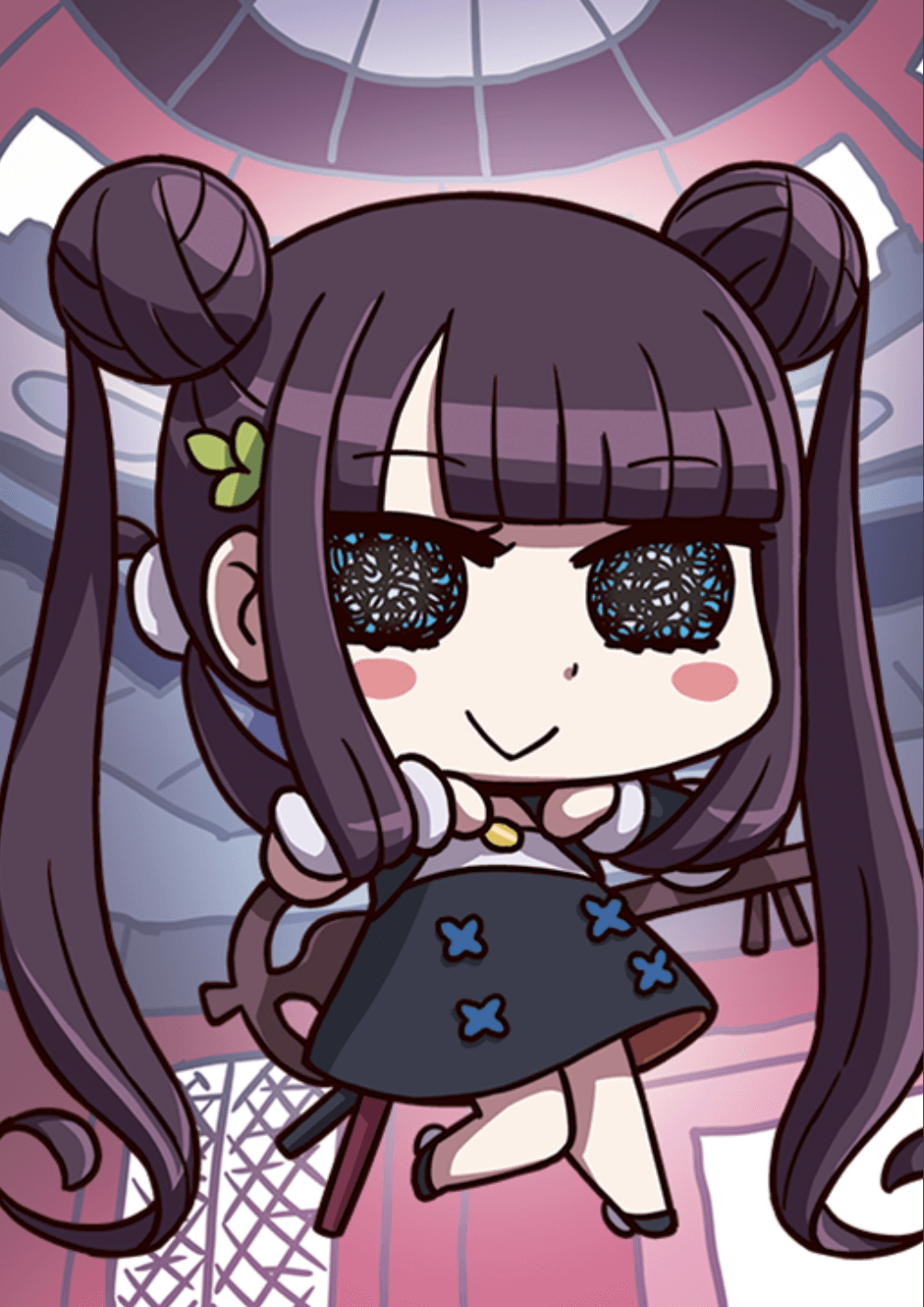 Favors of Three Thousand Concentrated to One A

Favors of Three Thousand Concentrated to One A+

Decrease NP Gauge by 1 for all enemies and increase own NP Gauge depending on amount drained.
NP Gauge Gained = # of enemies drained by 1 * [NP Drain]% multiplier (3 NP bars drained: 3*20 = 60%)
Decrease DEF for all enemies (3 turns).

Fairy of the Flame Wheel

Sun of a Malignant Star A

When equipped on Yang Guifei,
Increase own NP Damage by 30% and Inflict "Spread of Fire" (Increase Burn damage taken by 20%, last 3 turns) status upon enemies on normal attacks.

“Hi! I'm Yuuyuu the Foreigner! Please let me stay by your side for maaaaaany years…”

Everyone loves Yang Guifei, to the point that she accidentally led to the end of the Tang Dynasty. Oopsie-daisy! As a Single Target Arts damage dealer, Yang primarily serves as a stalwart option for longer fights who becomes more dangerous as the fight goes on.

Yang’s primary role in a team is for longer fights. With Favors of Three Thousand Concentrated to One she will draw a male enemy’s attention to her while avoiding damage with an invincibility. With Sun of a Malignant Star she will then both burn them and apply a defense down with every time she’s hit. Then with Ruinous Beauty she will take the enemy’s charge and deal supereffective damage with her Noble Phantasm, Rainbow Feathered Robe, Vow of Eternal Love.

While this setup can create some truly powerful damage, it isn’t without its flaws. For one, Yang on the first turn of a wave is a very weak option as she needs setup. She also has generally low utility, serving best on Berserker and Foreigner bosses. Lastly, against frequently debuff immune bosses, she loses all usage.

Guifei is the true mistress of burn, and against Berserker bosses will become a mainstay. Masters will love her just as much as she loves the emperor.

Many Servants in the game require specific enemy types in order to use their supereffective Noble Phantasms. At release, Guifei will be no different as her taunt only attracts male enemies. However, after her first Rank Up quest, she will be able to attract all enemy hits and inflict maximum stacks of her third skill’s Living Flame skill (10% defense down per hit) along with the requisite burn to apply supereffective damage to enemies. This damage can be among the highest in the game against traitless enemies.

Yang’s first skill gives her a taunt turn with a tied-in invincibility. Not only does this take pressure off the rest of her supports on the team from likely Berserker damage, but it also helps with her NP gain. As mentioned before, the taunt in combination with her Living Flame buff also inflicts serious debuffs which leave the enemy particularly susceptible to her Noble Phantasm.

The combination of the invincibility on Yang’s first skill plus the defense up on her third lead to Yang being a nice damage sponge. Her classing as a Foreigner also means she will rarely ever take double damage from enemies, and she has a decent enough HP pool.

Unless a Master is running a servant like Caster Liz as a support, Yang will not be able to use her Noble Phantasm to supereffective levels on the first turn due to the requirement of a burn debuff on the enemy. Even if she were to have a Caster Liz to inflict a burn via a skill against enemies, she would be lacking the benefits of defense downs from Sun of a Malignant Star and produce worse damage. She shines on turn 2 of a boss wave, while not so much on turn 1.

As a Foreigner, Yang’s primary advantage comes against Berserker type bosses. But even then she is looking for a single target enemy, making her moments to truly shine a rarity.

When a Master uses Yang, they will want to use her first skill and third skill on turn 1 to draw enemy attention to her and inflict burn and defense down debuffs on the enemy, and then her second skill to charge her Noble Phantasm and fire. As far as offensive benefits go, only her second skill scales to improve her damage, while the others scale primarily to decrease cooldown.

The beautiful imperial concubine whose beauty inflamed the rebellion in the Tang Empire and was said to be the very cause of the dynasty's ultimate downfall. She is a Foreigner who can at one moment seem the charming girl next door, and the next seem a bewitching princess clamoring for attention. Within her body burns the fire of a malignant god who dwells in the stars...

"I offer my beauty to my nation, my love to His Imperial Majesty, and my heart to my blood relatives. However, my pipa's melody...the joy of singing and dancing...is the only thing I shall keep for myself."

Her True Name is "Yang Yuhuan."
She's like your pretty childhood friend with unparalleled qualities...probably? Someone in her family would enter her into a beauty pageant without her knowing, which would result in her becoming really popular, yet somehow she would remain oblivious to her fame.

She is versed in singing, dancing, and playing the pipa. She also dearly loves hot springs and lychee. She is straightforward and positive. She works hard and takes joy in serving those with whom she is intimate.

During the three hundred years of the Tang Dynasty's rule, she became a concubine to Emperor Xuanzong at the dynasty's height. Xuanzong was the grandson of Wu Zetian, making her Yang Guifei's grandmother-in-law...at least that is their technical relationship, but mention that at your peril.

Since her youth, her beauty attracted villains and demons who constantly caused trouble, which made her become largely withdrawn. But when both her parents passed away, it was her looks that kept both her and her siblings off the streets. Since then, she has used her appearance as a tool to lead people to happiness, which also became a source of pride.

Favors of Three Thousand Concentrated to One: A
In the Inner Palace where three thousand beautiful women awaited the emperor's affections, Yang Guifei single-handedly received it all herself, even after her death.

Ruinous Beauty: A
The fate bestowed upon Yang Guifei, the unparalleled, catastrophic beauty who lead a nation to decay and devastation.

Sun of a Malignant Star: A
An undying light that continues to shine brilliantly even during the turbulent time of rebellion, like a candle wick that refuses to burn out.

A section from the epic poem written by the famous poet Bai Juyi titled, "Chang hen ge (Song of Everlasting Sorrow)" that retold the story of the undying love between Emperor Xuanzong and Yang Guifei. The "Rainbow Feathered Robe" passage was said to have been commissioned by Xuanzong for Yang Guifei. The poem was later forbidden for its symbolism of ruinous beauty, and its musical scores have been scattered and lost.

Yang Guifei became a Taoist nun before she was taken in as an imperial consort, and during that time she was trained under the Taoist Luo Gongyuan to ultimately gain the title "Taizhen." Her soul became that of a sage after her death, and it is said that she continues to wait to reunite with her beloved emperor.

The star from the abyss chants a song that doesn't reach the ears of the common people.