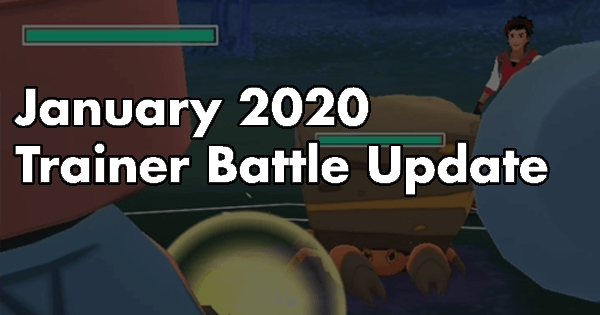 On January 23rd, Niantic made another combat rebalance bringing some more big changes to PvP. Some fundamental mechanic changes, some move updates, some Pokémon learning new moves, and (yahoo!) returning legacy moves! Let’s break this down bit by bit, because it’s incredibly exciting! Of course, thanks so much to the PokeMiners for their quick work finding the stats for these changes!

While the focus of this rebalance and article outlining it is PvP, Megahorn and Volt Switch received updates to both their PvP and PvE stats.

Previously a 90 Power, 55 Energy move in PvP, it shared a statline with Thunderbolt, Flamethrower, and Ice Beam. All solid moves, but not particularly good. It’s now 100 Power, 55 Energy, putting it on level with Shadow Ball and Stone Edge, two incredibly strong moves! This is a really solid buff to everything that learns it, most notably Heracross and Escavalier, though Nidoking will benefit as well!

In PvE, Megahorn was buffed from 90 to 110 power, a huge boost to Escavalier, the most relevant Pokemon that can learn the move. Not that anyone is really making use of Bug-type Pokemon, but Escavalier joins the ranks of Scizor and Pinsir with slightly more TDO. Scolipede receives a similar buff but isn't quite relevant still. Heracross unfortunately still struggles due to its lack of a good Bug Fast Move.

Previously written off for PvP because it honestly kinda sucked, Volt Switch took 5 whole turns to go off (2.5 seconds, longer than Confusion!) and only had 2.4 DPT and 2 EPT, making it completely useless. Now, though, it's a real force to be reckoned with. Down to 4 turns (same as Confusion) with 3 DPT and 4 EPT, the move is on par with Shadow Claw for damage and energy gain! This is an insane buff, and will likely make it the preferred move of choice for many Pokémon, being a direct stat upgrade over Spark, and an interesting alternative to Thunder Shock (1.5 DPT/4.5 EPT) as well! Pachirisu, Alolan Golem/Graveler, Raichu and Alolan Raichu, Ampharos, and Raikou will all take a serious look into this move, but everything that used it will be happy to see this buff!

In PvE, Volt Switch is now a faster move gaining slightly more DPS and higher energy gains as well.The changes are small enough that anything with access to Thunder Shock will still prefer that Fast Move. Surprisingly, the Alolan Geodude line are the only Electic-types in the game forced to use this mediocre move with no alternative Electric-type Fast Move. This is a buff for the Alolem, to be sure, but not enough to make him stand out in anything other than improving his Pokedraft position by a few picks.

This one's weird. In the main series, it's an attack that deals both Fighting and Flying damage, learned only by two Pokémon: Hawlucha and Pikachu Libre, a costumed variant of Pikachu. Given that Hawlucha's not even in Gen 5, we have to assume they're dropping Pikachu Libre some time soon? While we don't have PvP stats yet, in PvE it has better stats than Psystrike, which is insane!

Previously, the electric duo only had access to Discharge, Thunderbolt, and Swift. Swift is really, really, really bad, and wasn't really worth running. This resulted in a mono-Electric set, making them very easy to wall (as anyone who played the Minun vs Nidoqueen matchup in Ferocious Cup knows all too well). Now, with Grass Knot, they have an actual second charged move. Plusle's still just a less bulky version of Minun though, and will continue to live in its shadow, but they'll definitely be an interesting pick for the Great League!

Charge Beam isn't very good. As a 1.6 DPT/3.6 EPT move, it's just a strictly worse version of Spark. Thank goodness we don't need to deal with it anymore. Picking up Spark, Lanturn now has a very legitimate Electric set, giving it a speedier way to hit those Thunderbolts and Hydro Pumps! It was already a borderline viable mon pretty much every time it was cup-legal, and this is definitely going to give it a boost!

Ampharos had issues before. Being stuck with Volt Switch and Charge Beam, it had lacking energy generation, expensive charged moves, and mediocre bulk. However, with the buff to Volt Switch and now the addition of Thunder Punch, it has the possibility of being a very legitimate choice for an Electric-type attacker in the Great League. Real talk, its secondary charged move options still kinda suck. That said, Dragon Pulse, Focus Blast, and Power Gem all provide interesting and unique coverage options, so keep an eye out for all of them.

With yet another stat-changing move, the 10% Buff Chance Bug, the Silver Wind Savage, the Ominous Ogre is back with a really interesting role to play. While Bubble Beam deals between No and None damage, preventing it from really being used for Water coverage, the ability to debuff and shield bait is really nice. Not enough to make it top tier or anything, but nice.

Vespiquen actually has fast move options! Previously it only learned Bug Bite and Poison Sting, and Poison Sting is useless. Bug Bite's a fine move, with 3 DPT and 3 EPT, making it solidly average and unimpressive. Fury Cutter (2 DPT/4 EPT) gives it an interesting alternative to Bug Bite, prioritizing energy generation over damage, and has a very real shot at being Vespiquen's fast move of choice for Bug-related things. As a secondary option, Air Slash (3 DPT/3 EPT) provides Vespiquen with a Flying coverage option, somewhat changing its matchups (notably, making it better against Fighting-types).

If all that wasn't enough, 5 Pokémon got some incredibly meta-relevant Legacy moves back in their TM pool! These need no introduction, given that they've been the move of choice for these Pokémon whenever they're legal!

More or less an upgrade over Spark, Thunder Shock is an incredibly strong choice for Raichu. Given that it's not particularly bulky, the speed really allowed Raichu to go off, spamming its strong charged moves (and also Brick Break). That said, now that Volt Switch is so good, Raichu may once again forgo Thunder Shock for this higher damage option. Either way, the most important thing here is that all Hat Raichu can now be used in tournaments without sacrificing any power!

Much like Raichu, Magneton could function using Spark over Thunder Shock, though it was never exactly happy about it. However, it absolutely could not function without Discharge. Magnet Bomb was a must, giving it a spammy STAB option, and its other charged options were Flash Cannon (worse than Magnet Bomb) and Zap Cannon. Zap Cannon (which costs 80 energy) is a move that sims better than it realistically performs: great if you can consistently land it, awful if it ever gets shielded. This leaves Discharge as the preferred second charged move, keeping Magneton as a hyper-spammy, super-squishy anti-Flying option.

The preferred charged move to pair with Silver Wind whenever Venomoth's been used, starting way back in Twilight last February. While Poison Fang isn't exactly a fantastic move (40 Power/35 Energy), it provides the mighty moth with some additional baiting power and anti-fairy coverage. The poison damage has been so relevant that people have even used Dustox (Confusion/Silver Wind/Sludge Bomb) over non-legacy Venomoth!

The antithesis of the normal PvP axioms, Haunter is incredibly glassy, with the lowest bulk of anything regularly used in Great League. However, that doesn't stop it from being incredibly powerful, with the spammy combination of Shadow Claw + Shadow Punch and the incredibly hard-hitting Shadow Ball (or Sludge Bomb) in the back. While it's very difficult to use well, it's a real threat, and it's fantastic that everyone now has access to it at full power. Don't totally write off Sludge Bomb as an option, it's really nice for Fairy-types (especially Wigglytuff), but Shadow Ball is typically the move of choice.

In PvE, Shadow Ball Haunter has been a sleeper Legacy option for challenges like PokeDraft. It's Legacy status mostly kept it out of discussions and for a while the unevolved Pokemon was also kept off the popular PokeBattler. Frequent drafters know that Haunter can put up times comparable to its evolution, and we may now see its use increase in future seasons. Its use in the meta overall will remain incredibly low now though that Gengar has access to Shadow Claw from the previous update (and you can evolve them for free after a trade). Still, PokeBattlers get something out of this rebalance too.

While it's fantastic that Hypno's returning to accessibility with its primary charged move back in the TM pool, it's one helluva TM pool. With 7 currently available charged moves (Psychic, Future Sight, Focus Blast, Fire Punch, Ice Punch, Thunder Punch, and Shadow Ball), getting any Hypno ready will really tax your Charged TM collection. But it's absolutely worth it. Whenever Hypno's been legal, it's run Shadow Ball. Keep in mind that this set is so powerful it had to be banned from Sinister Cup, so it's awesome that it's back.

Off Topic - Silly Jokes & Other Funny Stuff
On a different topic captpepperjack posted a funny cartoon about being older . So I…
Why do you want Shinies?
In the last few days I have been reading people’s search for shiny Pokémons. I am not…
A (kinda) new player to the pvp scene looking for some advice on GBL
Hey there, I’m new here and recently I started playing this game more, mostly due to…
Shiny pokemon question
Hello, I don’t know if there is an answer to this but any opinion will help me…
Second move on shadow Pokémon
Hello all, I got a shadow Magikarp today with good PVP IVs and was curious as to if…
Read More