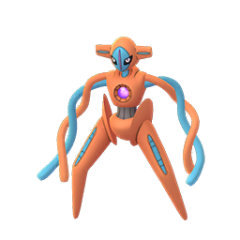 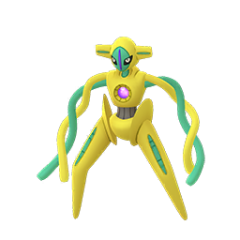 I see you there eyeing up that 345 base attack stat. Before you think that this makes a Pokemon good, I want to direct your attention to Deoxys Normal's defense stat. It's 115. How bad could that be? For reference, Gengar's base defense is 156. 115 sounds really frail now, doesn't it? But 345 base attack! With 2 of the worse fast moves in the game and Hyper Beam. Having its signature move Psycho Boost could have been a gain, but it deals little damage and has a 4 second cooldown (which is even slower than Hyper Beam). In short, Deoxys-Normal Forme is bad, like really bad. Abort mission. Do not power up. Niantic pls buff.

....well, at least it charges moves a little bit on the fast time?

Deoxys will likely be down before it can release a single charged move unless you use shields on it, but it's better to use them on a Pokemon that can actually do something beyond a single burst. If you want to use Deoxys, go with Defense.

Same story, just don't use it.

It literally can't even beat Machamp 1x1 using an all-psychic moveset. Let that sink in.