Should You Pull? Lucas & Dialga 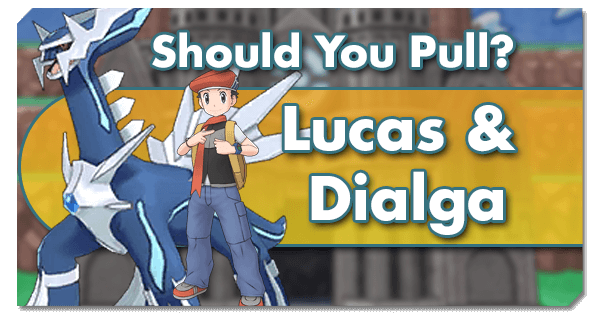 An outstandingly well-rounded offensive Sync Pair with high performance across the board, outstanding damage output, and the ability to boost team Dragon Type attacks with Dragon Zone.

Dragon is a pretty interesting type in Pokemon Masters. Since the introduction of Iris & Haxorus’ grid and the release of Lance & Dragonite, Dragon Type attackers have long been considered “good, but not top-tier” by much of the community. On many tier lists, the big-name Dragons tend to sit close-ish to the top, but they never quite make it that far. Why do I bring this up here? Because talking about Lucas & Dialga’s debut is talking about a turning-point in the history of Dragon Type attackers as a whole. Their capabilities as a Damage-Dealing Sync Pair are already very well known, and their ability to make use of Dragon Zone marks their entry into the game as the rise of the Dragons. Time will tell just how impactful this change will be in the long-term, but one fact is for certain; Lucas & Dialga are here, and Dragons will never be looked at in the same way again.

So what exactly do Lucas & Dialga bring to the table? Well, to begin with, they have great Special Attack, usable Speed, and pretty high bulk for a damage-dealing unit. They have X Speed + for quick self-Speed-buffing, It’s Our Time! for +2 Special Attack/+1 Accuracy/+3 Critical Rate, and Roar of Time for a strong, 4-bar Dragon Type attack that appreciates the previously mentioned +1 Accuracy to hem up its 90% base-accuracy. Ah, but these alone aren’t what makes Lucas & Dialga special! Dragon Wish is a trainer move that sets a weather/terrain-like stage boost to Dragon Type moves. Much like what we’ve just seen with Cynthia & Giratina, this move completely changes how we look at Dragon Types, as it raises this “good-but-not-perfect” archetype to new heights.

Moving on from the glorious effect of Dragon Wish, we come to Lucas & Dialga’s passive skills. First up is Grand Entry 4, which offers a huge +4 Special Attack when Lucas & Dialga  hit the field. This fits together like a puzzle with their trainer move, making +6 Special Attack and +3 Critical Rate achievable with a single move use, with +1 Accuracy added in to complete the offensive front put up by Roar of Time. Commanded Freebie 9 is a stellar passive skill that has 100% odds of awarding the Free Move Next effect any time Lucas uses a trainer move, which includes Dragon Wish! That’s right: it’s possible to use their trainer move to get Free Move Next, use it on Dragon Wish and get Free Move Next again, and then use Roar of Time for free, followed by either using the move gauge bars that you’ve stockpiled up to this point, or use X-Speed+ for another Free Move Next to start the whole process up again. Finally, Adrenaline 1 reduces the Sync Move counter by 1 the first time that Dialga & Lucas use their Sync Move, which ensures that the second Sync Move cycle won’t be interrupted by a late post-sync move input. It’s also thematically relevant, as this is one of the only effects at the disposal of Dialga, the Temporal Pokemon, that kinda-sorta affects time.

Lucas & Dialga… this unit is basically a Striker with an identity crisis. Their ability to set Dragon Zone is the most Tech-ish part of their base kit, as basically everything that they do focuses on blasting out huge damage. Seriously; between Roar of Time, fairly consistent free move usage, and their huge Sync Nuke, their Tech-based goal is to annoy the opponent by making them dead before they can strike back. And they’re actually very well suited to this role, as they set up very fast and have great move gauge management options to make life easier on themselves and their team. They are also made to be paired with a second Dragon Type attacker in order to outright tear down everything in their path thanks to Dragon Zone. This move really opens the flood-gates for some outstanding Dragon Type damage that can potentially invalidate many Dragon-weak stages in the game, as well as tear apart many stages even without a type-advantage

As for weaknesses… They honestly don’t have many. Arguments can be made for 4-bar move gauge management issues or the fact that Dragon Zone is temporary and limited, but these are all semi-moot points given Lucas & Dialga’s whole kit. The one real issue here is Dragon Zone itself. If you’re using Lucas & Dialga to deal Super Effective damage, then you’re looking at 100% odds that you’re fighting something that either is a Dragon itself, or is a Dragon in the main series and probably has access to Dragon Type moves here. This makes Dragon Zone a potential double-edged sword, as it can also boost particularly powerful moves used by the opponent such as Outrage or Draco Meteor, or even a Dragon Type Sync Move that could wipe the entire team if not managed correctly. For this reason, smart timing is important when using Lucas & Dialga, as their greatest strength could also disassemble their team at the same time. But, by that same token, using Lucas & Dialga on a dragon weak stage also means a stupidly fast clear, so it’s not as big of a deal as it seems on paper. Admittedly, this drawback is somewhat appropriate; the dragon of time inherently brings a bit of uncertainty to the field. Still, this is a very well-rounded Sync Pair with high average performance across the board.

Lucas & Dialga can be very useful on just about any stage. Their high average performance means that they can slot in against most challenges and sit there roaring until everything else is dead. Just remember that if using them on a Dragon-weak stage, your team will likely take high damage from incoming Dragon Zone boosted attacks but you should definitely be able to rush the opposition down quickly before they are a real threat in that scenario.

Where the lack of AoE Sync Move can be a pain in some other game modes, here it’s almost always just fine. With powerful single-target damage, Lucas & Dialga are focused and very ready to tear down some Legends. They also have the very real advantage of boosting the Dragon Types that are frequently overlooked to new heights, making stage clears all the easier.

Assuming the stage doesn’t require a specific gimmick to break through, Lucas & Dialga are great here. Their high damage and easy setup means they can power through many stages pretty quickly.

An innate +4 Special Attack is very nice for Lucas & Dialga here, and can lead to some serious damage output if combined with other passive boosts. However, move gauge management can be an absolute bear unless paired with Sycamore & Xerneas. The other option is picking up their Trainer Move’s MP Refresh tile, which is available at ⅕, and resetting stages until it activates.

These are generally the most important tiles on Lucas & Dialga’s grid:

From the main pool, Critical Strike 2 is definitely the way to go for its high damage boost, easy activation requirement, and ability to boost attack and Sync Move damage alike. From the Deluxe pool, the big stand-out is Super Powered 3 if using Lucas & Dialga for Super Effective stages. But given the fact that these two can also handle neutral stages very well, Critical Strike 2 may just be the best overall pick.

Lucas & Dialga really don’t require much support to operate beyond a sturdy tank to help keep the team safe, though a few stand-outs with unique effects aside from boosts are definitely worth considering. Red & Snorlax can grant Super Effective Up Next, which can provide a huge damage boost on Dragon weak stages when Dragon Zone is up. Jasmine & Celesteela can protect the team from Special Attacks in particular, provide gradual healing, and help Dialga whittle away at the opposition’s Special Defense for even more damage. Ingo & Excadrill can basically break the flow of battle by giving the entire team Free Move Next, potentially opening the floodgates for a tsunami of damage as a direct result. Just be sure that you don’t overlap with Lucas & Dialga’s natural Free Move Next effects when using them together. Lillie & Clefairy deserve a passing mention here as well, because their ability to reduce incoming Dragon Type damage for the team can be helpful for stages that sport high Dragon Type damage while Dragon Zone is up, and they can also help any other Dragon Strikers that may be on the team buff up faster and also enable Sure Critical attacks for any powerful Sync Moves.

On the more offensive side, literally any Dragon loves the effect of Dragon Zone. Lance & Dragonite, Cynthia & Kommo-o, Iris & Haxorus, Leon & Eternatus, Champion Iris & Hydreigon… the list goes on. With any of these, a bit of Move Gauge support is appreciated, though.

Are you seeing a theme here? Lucas & Dialga have stellar overall performance, and are very much worth pulling for just about everyone. However, some players might see them as overkill, and may not care quite as much about adding Lucas & Dialga to their team. Regardless, this is a Sync Pair with a lot of practical utility on top of a strong focused job, so they will definitely pay you back for your investment!