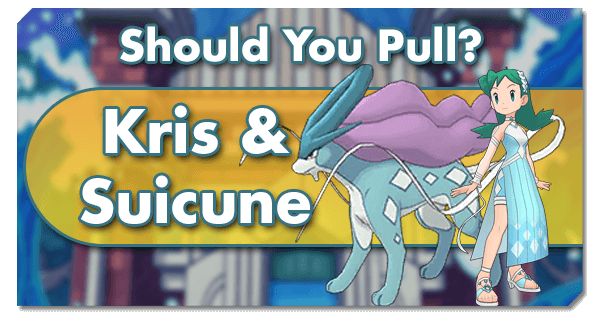 A staggeringly solid Sync Pair with comprehensive Special buffs, Rain Dance utility, and access to recovery for even more longevity.

Much like Ethan, poor Kris has had a bit of a sad story when it comes to Pokemon Masters. One of the original Five Star Sync Pairs in the game alongside her Feraligatr, she was viewed as less than outstanding at the very start of the game, and has done nothing but slip from her position in the months and years that followed the game’s debut. It’s now to the point where she’s nearly forgotten, buried beneath a growing meta that has left her behind, although her recent EX release was definitely a great addition to keep her somewhat relevant.

But now, as we draw near to the 3-year mark for the game, it’s time for all of that to change. Keeping with her Water Type theme, she now pairs up with the Legendary Pokemon Suicune, and together they walk towards a future that’s both bright, and Crystal-clear.

Looking at Kris & Suicune’s bulk we can see high HP and high Defense and high Special Defense comparable to the nearly unkillable Sygna Suit Morty & Ho-oh when accounting for their Master Passive. To put this into perspective, Kris & Suicune have Special bulk close to Cheryl & Blissey, and Physical bulk close to Jasmine & MEGA Steelix, making them one of the bulkiest Sync Pair in the game all things considered.

Okay, moving on to moves! We start the list off with Brine, which is a 2-bar move that has low damage that doubles when used against an opponent with 50% HP or less. Next is Mini Potion All for some good-old-fashioned healing. We follow that up with Rain Dance, which is… Rain Dance. It’s a good way to make it rain! Finally, Spring of Knowledge is a 2-MP Trainer Move that grants +2 Special Attack, +1 Critical Rate, and 1 stack of the Special Move Up Next effect if used while it’s raining, which translates into +40% damage for the next Special Attack that the affected Sync Pairs use.

To finish the basic overview, we come to Passive Skills. And the first skill on the list is Johto Flag Bearer. This lovely skill increases move power by 10% and reduces incoming move damage by 20%, and increases even more when more Johto-based Sync Pairs are on the team. This skill is especially valuable given the fact that this is a Support Unit, meaning it can easily stack with other Master Skills without any issue. Next is Sync Burst 1, which gives 1 MP to Spring of Knowledge!, Mini Potion All, and Rain Dance when Kris & Suicune Sync for the first time each battle. We follow this up with Team Mind-Bracing Infliction 4, which is a wonderful passive skill that increases the entire team’s Special Defense by 4 when Suicune uses Rain Dance for the first time. And, finally, we have First Aid 4, which is an old classic that we’ve seen many times, but it still never gets old. When Kris & Suicune’s HP drops below 25% for the first time each battle, this skill kicks in and insta-recovers 50% of their max HP. And since this Sync Pair is so absurdly bulky, it’s a very safe bet that you’ll safely drop into the red before dropping the majority of the time.

So what do Kris & Suicune do right? They live! Seriously, this is officially one of the single hardest Sync Pairs to drop in the whole of Pokemon Masters right now. Between crazy-high base bulk, a Master Skill that raises that bulk by a whopping 20%, passive Special Defense buffs (and Defense too via their grid!), and multiple sources of healing, this is a Sync Pair that can butt heads with the hardest hitting stages in the game and keep going like a champ. They can also max out the team’s Special Attack and Critical Rate, though they need to take an early Sync Move to complete the job. And, honestly, they’re not even that bad on the offensive side either. Brine may look like a joke of an attack, but when the opponent is down to 50% HP or less and it's raining, it can actually cause a bit of a dent! It’s unlikely to be the deciding factor in many battles, mind you, but it might save a move or two in the long run. And as the icing on the cake, this is yet another optimal Rain unit! This is a unit that does a number of things pretty danged well, and then does one thing in particular extremely well!

As usual though, we have to look at the down-sides for Kris & Suicune. As stated, reaching a full buffing profile requires either a Sync Move or an MP Refresh via their grid. And while giving an EXed Kris & Suicune the first Sync Move in most battles is definitely not a bad idea by any stretch of the imagination, it can slow their buffs down a little bit and can make them a bit harder to fit alongside other teammates that want an early Sync Move, like many Mega Evolutions. We also have to take a closer look at their aforementioned bulk. Yes, it’s definitely outstanding, but in practice it can be a bit surprising to see just how much damage they can take from some stronger attacks, especially on the Physical side due to their lack of Defense buffs outside of their grid. In short; this is a Sync Pair with great bulk and longevity, but don’t expect virtual immortality to be a core feature of their performance.

Stellar bulk + great buffs + an enticing reason to use a Support EX Sync early-game = a monster. Kris & Suicune can dominate many stages, as they stare defiantly at whoever they’re facing and push their team to victory.

While primarily useful in tanking stages with an emphasis on Special attack due to their quick +4 Special Defense, Kris & Suicune are definitely able to hold their own on most stages due to their high base bulk and great supportive presence.

Even in stages that give a tremendous 5x Stat Bonus to regions other than Johto, you might be surprised how long this duo can last. They’re not the end-all-beat-all, but they can definitely hold their own when it comes right down to it, and will tend to be optimal or nearly optimal when on even ground with their competition.

Kris & Suicune can score a single MP Refresh on Kris’ Trainer Move when they Sync for the first time each fight, so they're overall solid for chaining Villa stages in the same vein as the tried-and-true Professor Sycamore & Xerneas.

While ⅗ is definitely the big goal for this Sync pair, ⅖ actually has a fair bit of utility behind it as well. A number of the important tiles on their grid unlock at this level, so in general the goal should be at least ⅖, with future candy ready to make the ⅗ for maximum capabilities. This isn’t to say that ⅕ is bad, as their kit is already very functional at base, but it definitely improves significantly with duplicates.

As far as EXing goes, this is the main feature that makes an early Sync Move invested into Kris & Suicune extremely valuable, so it should definitely be a priority.

Vigilance is the tried-and-true method for gaining added longevity, and will tend to be the best overall pick here. However, Adrenaline 1 has some very real utility for some teams, and might be worth considering as well.

As we’ve already covered, Kris & Suicune can easily transcend the role of “obligate rain setter”, but they can also lean into it pretty hard as well! Archie & Kyogre and Cyrus & Palkia in particular both love the added Rain support, Special Attack Up Next effects, and the faster buffs that Kris & Suicune can provide. Sygna Suit Ethan & Lugia also appreciate all that Kris & Suicune have to offer, and can take advantage of Rain for more Sync Move damage via their Sync Grid. Lance & Gyarados also pairs very well with Kris & Suicine as they can fully utilize their Rain oriented Sync Grid and get their much needed stat buffs from them.

Moving on, basically any Special Attacker loves having Kris & Suicune by their side, and even a number of Physical attackers as well. In short, this is a Support that can slot into most teams and do a great job. But circling back to Special Attackers, any of them with incomplete or awkward self-buffing capabilities like Giovanni & Mewtwo, Lysandre & Yveltal, or Lance & Dragonite will tend to get the most out of this pairing.

Sygna Suit Kris & Suicune are remarkably strong at everything that they do, and are definitely stand-outs, even among the incredibly powerful Johto Trio. They offer near-universal utility, while being an amazing archetype enabler for Rain teams, so it’s fairly easy to argue that this is where your investments should go. However, keep in mind that the other members of the trio are also outstanding, so the competition is definitely worth considering. Still, any gems spent on Kris & Suicune are an investment, because this duo is here to pay you back with very high overall performance!