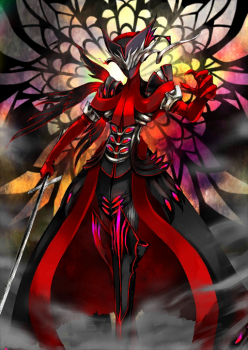 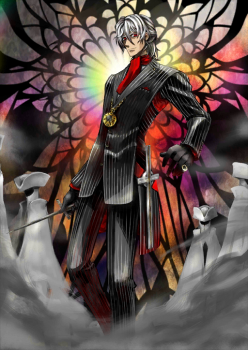 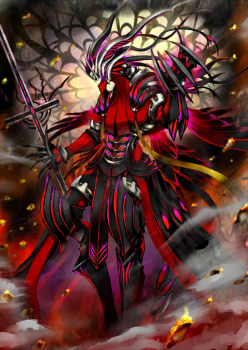 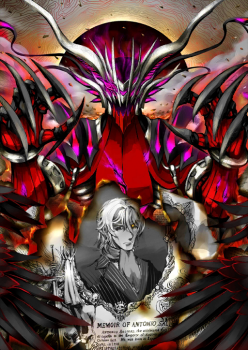 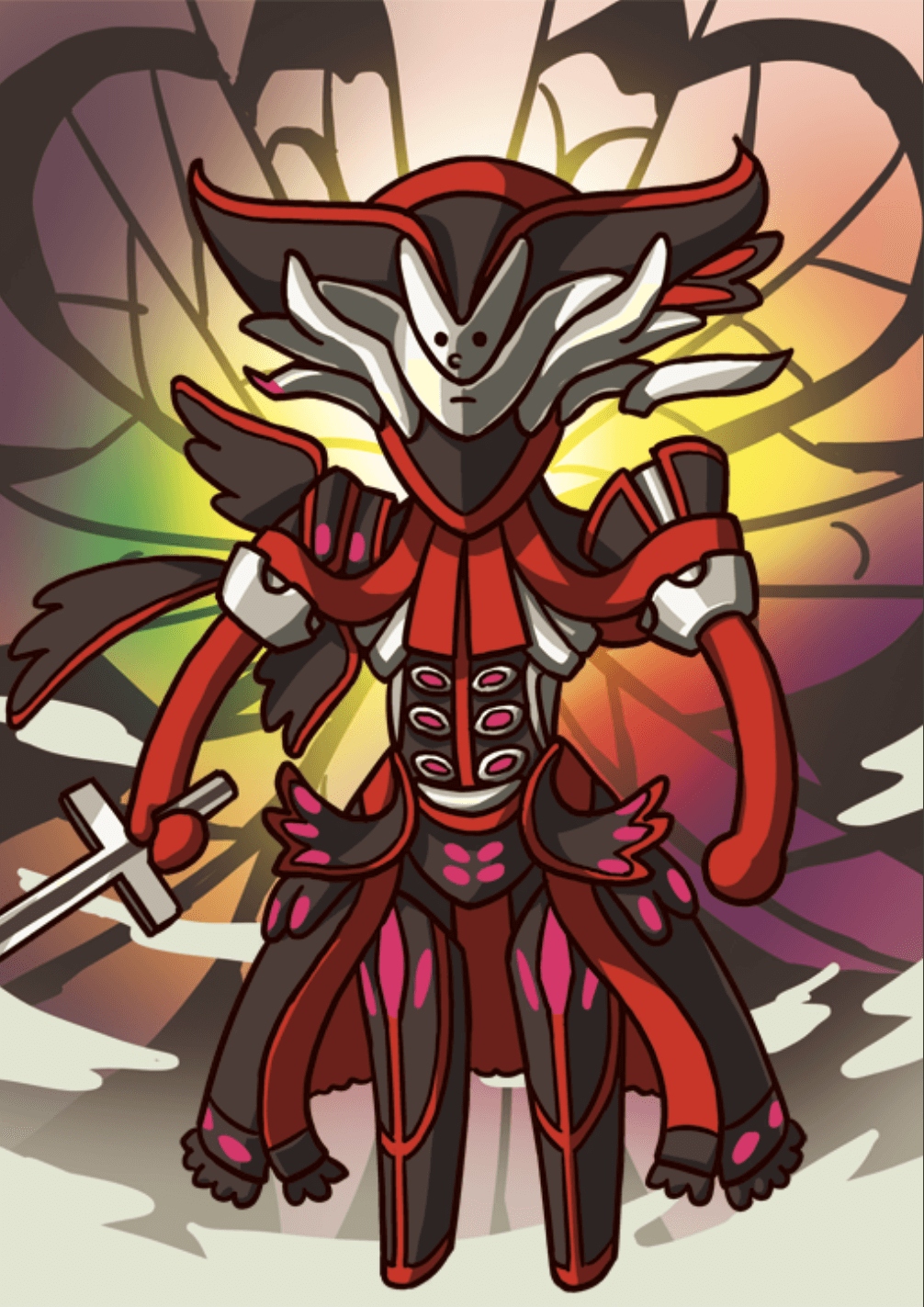 Increase NP Gauge each turn by 3.3% for yourself.

Deals damage to all enemies.
Decrease Critical Star Drop Rate for all allies by 20% (3 turns). [Demerit]

To the Great One Up in the Heavens, Please Take Pity on Me

When equipped on Antonio Salieri,
Increase all allies' Arts Card effectiveness by 10% & NP Gain by 10% when he is on the field.

"Now, let us play your requiem!"

Antonio Salieri, whose current form is based on the rumor that he poisoned Wolfgang Amadeus Mozart in their bitter rivalry, is the first silver Avenger class Servants available to Masters. In Fate/Grand Order, he primarily serves as a hybrid AoE Arts critical damage dealer.

Salieri has several sources of damage boosts at his disposal. Lamenting Exterior provides a decent self-Arts buff, while Wildfire can decrease the defense of a single enemy, enhancing damage of all party members against the target. Innocent Monster EX allows Antonio to generate stars while also providing a decent boost to his critical strength on top of his critical strength-boosting passive. Finally, his noble phantasm, Dio Santissimo Misericordia de Mi, deals damage to all enemies, decreases the party’s critical star drop rate, and most notably inflicts an Arts resist down debuff, indirectly enhancing the performance of any Arts-based allies.

In exchange for his many ways of pushing damage, Salieri has no defense whatsoever, meaning he’s likely to go down quickly in harder fights. Additionally, Salieri has difficulty leveraging his potential for strong critical attacks, as he has no innate way to overcome his Avenger star weight. Salieri is also a story-locked 3*, which means he is less likely to be NP5 than are most of the other silver Servants he has to compete with.

Overall, Antonio Salieri is an Arts-based AoE damage dealer who provides various boosts to an Arts-crit hybrid team. While his relative fragility can be a liability, he deals strong damage to all enemy classes, and his general flexibility as a damage-dealer makes him valuable to Masters who lack higher-rarity AoE Arts options or who like using unconventional teams.

All three of Salieri’s skills provide damage buffs or debuffs, and his NP applies Arts Resistance Down to the entire enemy team. As Salieri has damage boosts in all three common buff brackets (attack, card-type, and critical damage), Salieri’s critical attacks can do remarkably good damage despite his status as a 3* Servant.

As Salieri is an Avenger, he is a flexible pick for AoE quests with enemies of multiple classes. He will almost never benefit from offensive or defensive class advantage, but in exchange he doesn’t much care who he’s facing. This is especially nice given how relatively inexpensive Salieri is. Strong, accessible,  class-neutral AoE options are hard to come by, especially as Arts Servants go.

Salieri boosts party damage, makes stars passively, and has low base star weight, which makes him a surprisingly good semi-support in critical-attack-oriented teams. A team consisting of Salieri, another semi-support, and either a third semi-support or a full damage-dealer can be remarkably effective, especially as non-standard team compositions go. This makes Salieri uniquely valuable to Masters who lack the major supportive Servants or who enjoy running unusual teams.

Salieri is a fully offensive Servant, which means he has absolutely no way to protect himself from enemy fire. His low health pool compounds matters, so without outside protection he’s not likely to last long.

While Salieri has the potential for strong critical attacks, his Avenger star weight makes it difficult for him to reliably take the critical stars he needs to leverage his potential. Salieri is dependent on having allies who can generate large numbers of critical stars in order to fully shine as a damage-dealer.

As a story-locked 3*, Salieri is more difficult to take to NP5 than most Servants sharing his rarity. Fortunately for him, the general lack of low-rarity extra-class Servants means Salieri is nearly guaranteed to appear on any extra-class-specific banners. Outside of those banners, however, Salieri is something of a rarity.

Salieri is a Servant built around hit-based skills, which is to say, skills with durations tied primarily to number of attacks rather than turns elapsed. This shapes the usefulness of his skills in practice. Lamenting Exterior is Salieri’s primary NP buff, and it also helps to increase his effective NP gain, so it should be leveled first. Innocent Monster works quite well with its hit-based duration and should be leveled second. Wildfire is the weakest of Salieri’s skills and should be leveled last.

Innocent Monster EX provides stars passively on a reasonably short cooldown, which makes it slightly easier for Salieri to crit and can also help him to enable critical-attack-focused allies. Critical damage buffs also benefit more from hit-based durations than do other types of buffs, as the buff is only expended when Salieri lands a critical attack, meaning this buff isn’t wasted if Salieri gets unlucky on a particular turn.

Lamenting Exterior A is Salieri’s main damage boost. A charge of this is expended each time Salieri uses an Arts card (or his NP), so it can take some micromanaging of card usage to get the most of this skill. That said, an advantage of the hit-based duration is that Salieri can use this skill before he actually needs it in order to get the cooldown rolling so it is ready to use again sooner.

Wildfire B is the least useful of Salieri’s skills. Any attack from any Servant on the enemy afflicted with this debuff will eat one of the charges, which makes it highly difficult to make effective use of this. Additionally, the fact that this is a single-target skill means Salieri can’t use it to boost his NP damage against an entire wave of enemies. This tends to be most useful when Salieri has critical attacks lined up, or when one of Salieri’s allies is ready to use an offensive NP.

Salieri’s middling-to-weak NP gain and his preference for faster-moving teams mean Starting NP Gauge CEs tend to be particularly useful for him. Arts Up and NP Damage Up CEs can also be useful, particularly if Salieri is paired with supports who can help him use his NP more frequently.

Wolfgang Amadeus Mozart!
My purpose for being is to kill you.

Your honor, your music, your legacy...I shall kill it all. Should you manifest upon this land, I will be sure to kill you with my own hands this time.
Gottlieb...a man who was loved by God.

Height/Weight: 181cm, 65kg
Origin: The Man in Grey, Mozart assassination legends, and others
Region: Europe
Alignment: Chaotic-Evil
Gender: Male
Frequently talks to himself. Seems to think he gets along well with Jeanne Alter and the Count of Monte Cristo.
Does not get along with Phantom.
Meek as a lamb when he's around Marie Antoinette.

A most excellent Servant who will, whenever ordered by his master, brutally attack and destroy all assigned targets. Never once does his own humanity interfere.

Though typically calm and collected, his mental state is compromised as a result of becoming an Innocent Monster. His fusion with the Man in Grey, a being of myth not unlike the Grim Reaper, has only exacerbated the problem. The instant he sees Wolfgang Amadeus Mozart, he will ignore his Master's orders and become nothing more than a harbinger of death.

Innocent Monster: EX
Salieri never killed anyone during his lifetime. However, rumors of his assassination of Mozart eventually spread around the world, so he had little choice but to become an Innocent Monster. This skill is combined with Self-Denial, normally a stand-alone skill, to become a kind of compound skill.

Lamenting Exterior: A
Salieri puts forward the face of an Anti-Hero. This is because his ability stems from his synchronizing with another being, the Man in Grey, who is famously depicted as appearing before Mozart and commissioning him to write his Requiem in July of 1791. In battle, Salieri automatically dons this facade and behaves like an agent of slaughter.

Wildfire: B
As with any rumor, the legends of Mozart's assassination spread like wildfire. Avenger Salieri is perhaps the embodiment of all mankind's malice, slander, rumor, demagoguery, and horrible whispers, all of which serve to give him his power as well.
This skill not only instantly weakens the minds of his targets, but also functions as an intense mental attack. Unless his target has defenses on par with magecraft, he may drive them to suicide.

[Dio Santissimo Misericordia de Mi]
Rank: C
NP Type: Anti-Army
Range: 1 - 20
Maximum Targets: 50
Our Lord in Heaven, Have Pity on Me!
Derived from a monstrous, murderous rage that none could ever hope to suppress. Salieri compresses, solidifies, and then combines this fury with magical energy to play a tune of destruction that shreds the body and mind of his target. This musical Noble Phantasm is something that Antonio Salieri could never have possessed while living. It is a special ability that only Salieri the Avenger-class Servant, the Innocent Monster, may wield.

...In a cruel twist of fate, the Avenger Salieri will never be able to hear the music he plays—considered to be equal to Amadeus's own work—as sound.

Normally, he would not have been recorded on the Throne as an Anti-Hero. Though he lost his position at court, he was still a respected musician who took many other musicians and their children as disciples. His group of pupils included Süssmayr (Mozart's best disciple), Franz Xaver Wolfgang Mozart (Mozart's son), and even Beethoven.

However, around 1820, a rumor took hold around the world that Salieri had murdered Mozart. Though there was no truth to the rumor, people began envisioning a tragic story of a genius beloved by God and a talented prodigy jealous enough to kill. Even when an aged Salieri once told his pupil Moscheles that such rumors were "malicious slander and nothing else," this was taken to be a confession of his crime. There were even rumors that Salieri, overcome with regret in his old age, went on to slash his own throat.

Unlock after clearing Lostbelt No.1 and reach Bond Level 5

And so, after some time, Salieri's existence becomes twisted by the baseless assassination legend, and fuses with the Man in Grey, who appears in legends describing the end of Mozart's life. Ultimately, he manifests as a Servant, as an Anti-Hero who brings terrible harm to humans.

A sad being.
An angry being.
A murderer of all things beloved by God.
An Innocent Monster.

In consequence of this, Salieri becomes an aggressive, difficult-to-control Servant. Handle with care.
(It is believed that his sanity was somewhat intact during his manifestation in the Lostbelt.)

A Meihousou Most Foul Pickup Summon