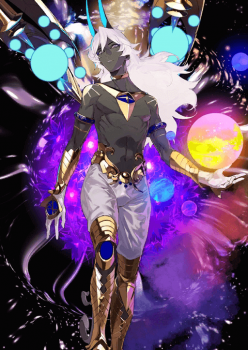 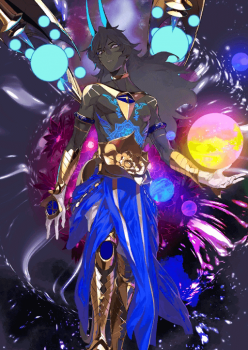 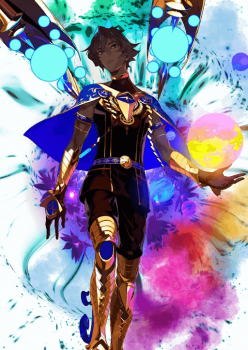 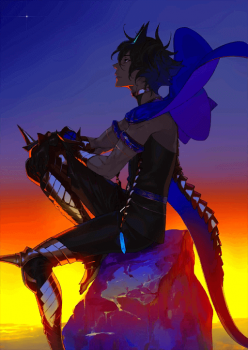 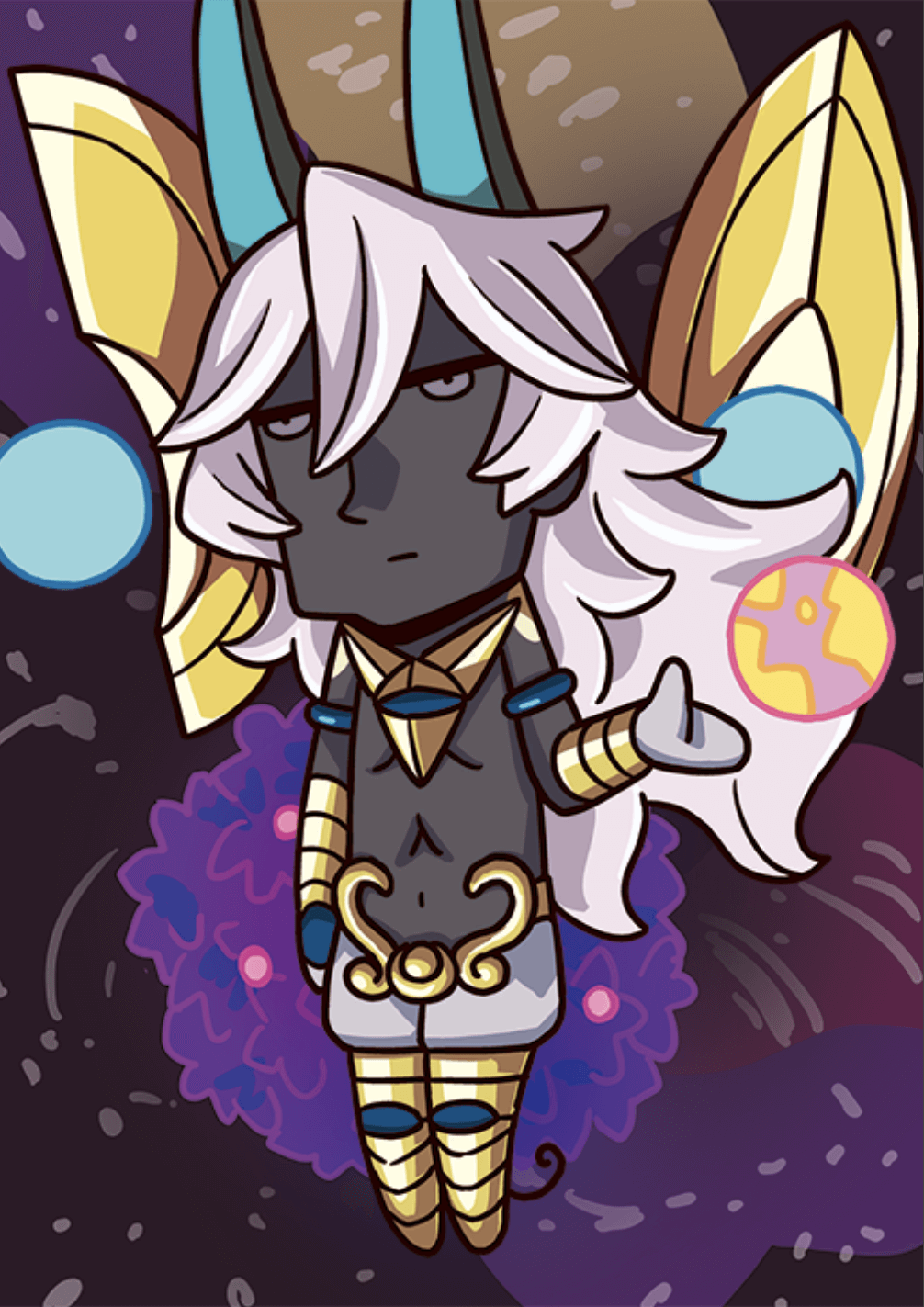 Apply Damage Plus for yourself (Total Card Damage +250).

Sword that Sentences to Annihilation

When equipped on Arjuna (Alter),
Grant Invulnerability to self for 3 attacks and increase own NP Damage by 30%

Chaldea’s Arjuna (Alter) is a different version of his omnipotent Lostbelt version, having regained his humanity through the severance of his connection to the gods. Even now, however, his combat capability still lives up to its reputation. Arjuna (Alter) is, essentially, a Buster glass cannon who best embodies the phrase ‘the best defense is a good offense’.

While Anti-Evil (Unique)’s Attack Up is already very solid on its own, the skill’s supereffective against enemies-with-Debuff part is very easy to activate thanks to Mahapralaya’s Buster Resistance Down (which activates before the NP deals damage, meaning that it also benefits from Anti-Evil’s full effect most of the time). These factors, combined with the further 12% Buster Performance Up from his Madness Enhancement EX, result in one of the highest amounts of self-buffs in the game, yet Clairvoyance (Transcendant) brings his damage potential to an even higher level with its Buster Card Star Gather Rate Up, which makes his Buster criticals very reliable. As the cherry on top, all the aforementioned skill effects last for 3 turns, and Clairvoyance (Transcendant) even charges his NP gauge (30% when maxed).

Being a Berserker, his survivability is on the low side of things, though he does fortunately have Soul’s Light’s Guts to fall back on in emergencies. He also has no utility to speak of, and will have to rely on Craft Essences or his allies to provide those when necessary.

Indeed, outside of his damage dealing capability, Arjuna (Alter) does not really have much else to offer… not that he needs to, at any rate, as the sheer magnitude of his offense makes it so that his weaknesses are hardly felt in most situations. With the Berserker advantage, a powerful AoE NP and reliable, powerful critical hits, Arjuna (Alter) is everything anyone could ask for in a Buster damage dealer, and more!

Above all else, the primary factor leading to Arjuna (Alter)’s offensive strength is the fact that the ‘supereffective’ part of Anti-Evil (Unique) is very easy to activate, the application of a debuff being something that is very much under the Chaldea side’s control. Even putting aside his NP’s debuff, other Servants, Craft Essences and even Mystic Codes can be used to apply various sorts of debuffs. Of course, debuffs can miss, and enemies with Debuff Immunity may even bring him down to the same playing field as his peers, but these occurrences are far and few in-between; the rest of the time, Arjuna (Alter) will be wreaking havoc with a supereffective consistency that beats even the likes of Gilgamesh.

Despite Arjuna (Alter)’s lack of an NP upgrade, his AoE damage is nothing short of top tier thanks to his massive buffs and Berserker advantage; being comparable to a single-target NP in damage. To put things into perspective, even after Raikou’s NP upgrade, she is only able to slightly surpass Arjuna’s NP Damage with her own, decidedly less consistent supereffective in play.

All of Arjuna (Alter)’s offensive self-buffs also affect his normal command cards, and in extension, his criticals. With how much damage his un-upgraded NP is able to dish out, it is not difficult to imagine how monstrous his criticals can be when buffed by a strong support. Perhaps more importantly, Clairvoyance (Transcendant) helps focus available critical stars on his Buster cards, which he has three of as a Berserker, which makes him more consistent than nearly all other critical damage dealers.

The final component in Arjuna (Alter)’s recipe for success is the 3-turn duration on every single one of his offensive buffs (and debuffs). This means that enemies with Break do not hamper him as much as other damage dealers, and with the help of someone like BB (Summer) and three Buster cards, he can dish out some incredibly ridiculous damage during the 3-turn duration.

Berserkers are notoriously difficult to keep alive, and Arjuna (Alter) in this regard is no different from the rest. Although Soul’s Light’s Guts is very valuable in high-pressure situations and can potentially save a run, it still leaves him at low health after use, and while the skill also provides some semblance of HP Recovery, the amount it heals per turn is often not enough to let him survive a hit from harder-hitting bosses.

Arjuna (Alter)’s kit lacks any sort of utility, minor or otherwise. This means that he has to entirely rely on his supports and Craft Essence choice to deal with unexpected stage gimmicks. Fortunately, his high damage often allows him to shorten such fights that these gimmicks, in turn, become less troublesome.

It’s recommended to max out Arjuna (Alter)’s first two skills if possible. Soul’s Light, meanwhile, does not contribute to his offense and can be left at a lower skill level, though leveling it to some extent will help increase his chances of survival in crucial moments.

As with many damage dealers, Starting NP Gauge is Arjuna (Alter)’s preferred CE effect in most situations. In terms of offensive effects, Buster Performance Up and Attack Up are great choices, while NP Damage Up and Critical Damage Up are also beneficial, if slightly inferior compared to the first two effects.

He abandoned his humanity and his land to ascend to godhood, ultimately becoming the sole being looking down on mankind.

In order to create a truly perfect world, he rules over all creation as the god of destruction.

In Indian mythology, there's a hero who is extremely close to being a god who both ends and restarts everything. And now this Lostbelt Servant, Arjuna (Alter), inherited the Authority of destruction from this hero. He lost almost all of his human qualities in exchange for this power, but his innate nature as a hero prevented him from becoming completely mechanical.

As his relationships with the gods were severed and he is now summoned as a Heroic Spirit, he will begin to slowly regain his original human nature as his Ascensions progress.

Madness Enhancement: EX
He resolved to rid himself of all evil to begin a new age. But in exchange, he's lost almost all of his human qualities. As his Spirit Origin changes, his Madness Enhancement also fluctuates.

Anti-Evil (Unique): EX
The equivalent of those who have the Authority to bring about the end. The skill shoulders the duty to eliminate various evils. Because it's highly virtuous, this skill affects almost everyone other than innocent children or saints.

Clairvoyance (Transcendent): EX
Clairvoyance that transcends the limits of a human being. In a sense, it can be said that this is the ultimate form of sight, differing from that of Mystic Eyes.

Soul's Light: EX
The human spark and personality that Arjuna barely managed to protect and maintain. Its light will shine brighter by growing stronger along with his Master.

Typically he conducts himself as a perfect device of destruction that has shed its human qualities. This was the price he had to pay in order to change from one who brings about end to gain Anti-Evil skills and Divinity as his Authority.

However, continuous Ascension will enable him to slowly regain his human qualities. Should this happen, he may show a glimpse of an innocent young man more so than Arjuna the Archer. This is because Archer Arjuna consciously tries to be a Servant suitable for his Master, while Arjuna (Alter) does not have that kind of consideration.

Archer Arjuna carries himself by holding an ideal image of what a hero should be, while the Lostbelt Servant Arjuna (Alter) idolizes Archer Arjuna as a proud hero.

The Sword of Recursion That Arbitrates the Great Dissolution.
Arjuna's other power bestowed to him along with his "Anti-Evil" skill, which is the sword of recursion that arbitrates dissolution. When everything is set to meet its end, he is tasked to swing his sword to eradicate evil and the world. Once he swings the sword, the whole of the world is completely destroyed. Mahāpralaya pertains to the moment Brahma dies and the universe comes to dissolution...in other words, it indicates saṃvartakalpa.

Though, even the peerless Arjuna is unable to wield the sword's full power once he is summoned as a Servant. But the fact that its destructive powers are simply condensed and limited makes it no different than "Pashupata," and it seems Arjuna thinks it's still quite usable.

He reigned as a perfect god in the Indian Lostbelt. His original personality was overwritten, and he was a literal Deus Ex Machina...where he became a figurative concept that continuously helped cycle the world.

However, Arjuna's egotism (even if it was only to the extent of wanting to best someone, the desire to be great, and to hate and be angry at something) that controlled his personality and continued to endure was what, ironically, enabled him to regain his humanity. His incessant desire to beat Karna was what brought him back to humanity.

In the Indian Lostbelt, taking in various Authorities of gods made him go berserk, and he was unforgiving to even the slightest failures. But now that he has been summoned as a Servant, the only thing he doesn't tolerate is evil that challenge his Master, and he even shows a glimpse of kindness typically found in the Arjuna from Proper Human History.