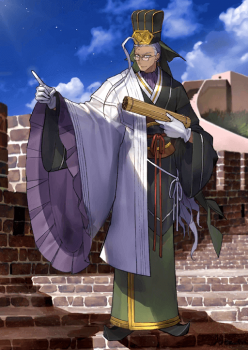 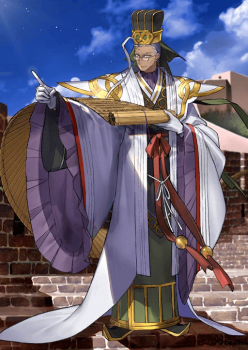 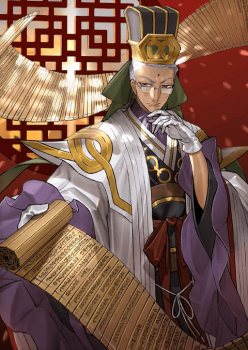 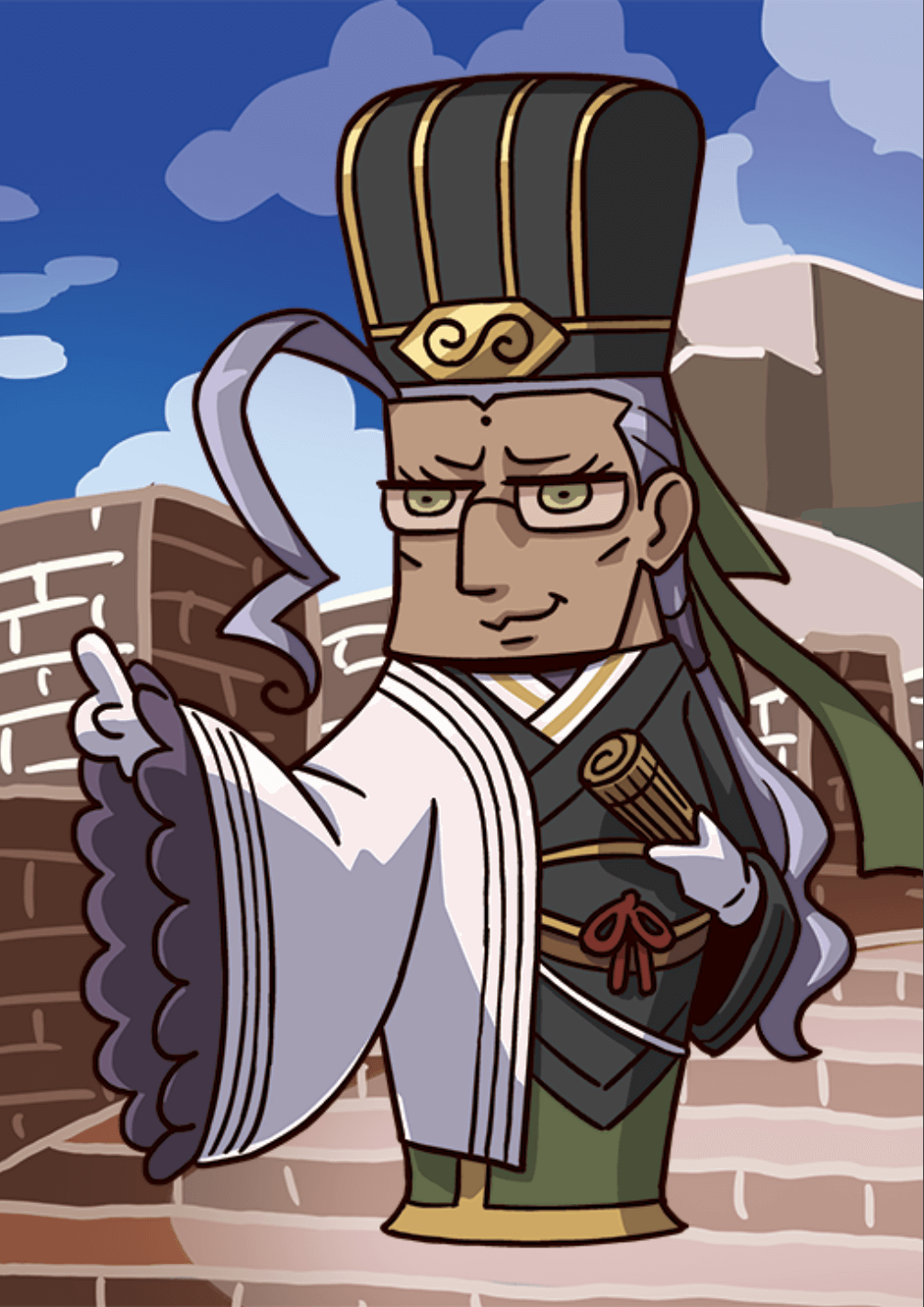 (Can only be used while there is at least one other Servant on the field who can be used as a sacrifice)
Deals significant damage to all enemies.
Sacrifices an ally (Instant-Death effect that ignores Instant-Death resistance) [Demerit]
* The leftmost ally (that is not Chen Gong) will be sacrificed.

“Hm, there is no other choice but self-destruction!”

Chen Gong is a strategist who was most well-known for his service to the infamous Lu Bu during the Three Kingdoms era. Callous, sadistic yet also scholarly, his unparalleled ability to utilize other people is sublimated in his Noble Phantasm — a one of a kind technique which sacrifices the life of an ally in exchange for AoE firepower which equals single-target NPs.

Two-Pronged Formation is valuable for more than its damage, however, as its ally sacrifice effect gives him the ability to dispose of supports who have used their skills, and bring in the next support right afterwards. Even ignoring this capability, Chen Gong still proves to be a major asset for Buster teams, offering very powerful damage buffs through Tactician’s Cherished Desire, and Taunt from Scapegoat to temporarily protect the damage dealer. The Taunt can also be utilized to eliminate Chen Gong himself, giving way for yet another Servant from the backline. He also grants a small amount of party-wide NP Charge in Tactician's Advice, which also increases the party’s survivability.

Chen Gong’s main weakness is that his team setups tend to be very expensive. His ally sacrifice is tied to his NP, which means that reliable access to it generally requires the help of a (preferably MLB) Kaleidoscope. His NP loop also relies on having multiple high-tier supports (i.e. those with 50% NP Charge), which can make it tricky to pull off for Masters with more limited Servant line-ups. As a dedicated support, Chen Gong is limited by his buffs’ 1-turn duration and his lack of long-term sustain or hard defensive skill.

Nevertheless, these shortcomings are negligible at best when compared to the sheer possibilities Chen Gong offers. With strong supporting capability, a powerful NP as well as the potential to NP loop, and even the capability to make more effective solo runs, all on top of being an easy-to-get 2-star Servant, Chen Gong is a very fun and powerful option for those who can afford to build his teams.

With an NP Damage modifier equaling that of single-target NPs in addition to his low-star (and in turn easy NP5) status, Chen Gong’s base NP damage is exceptionally high, though he may need the aid of external buffs to fully realize its potential. In a properly-supported team, his NP damage can even beat out that of much higher rarity Servants.

Two-Pronged Formation’s so-called demerit turns out to be Chen Gong’s most notable niche, as the ability to forcefully replace supports who have used their skills with new, fresh ones from the backline is something only previously achievable through the use of the Chaldea Combat Uniform. Its benefit is most clearly displayed in Chen Gong’s NP loop composition, which relies on having multiple NP Charge supports equipped with CEs such as the Battle of Camlann to charge up Chen Gong’s NP every turn. It also has applications in solo runs, combined with Scapegoat’s Taunt to eliminate Chen Gong himself as well.

The offensive buffs offered by Tactician’s Cherished Desire are very impressive in magnitude, equaling that of Merlin’s Hero Creation skill. In fact, the two skills are very similar, though Chen Gong’s is more limited; for example, the Buster Performance Up and Max HP Up effects last for only 1 turn instead of 3, and its Critical Strength Up only applies to Berserkers. Chen Gong also offers a 10% NP Charge, which when paired with a support Merlin and Shakespeare allows Buster Servants to execute an instant NP with 50% Starting NP CEs.

While Chen Gong does have the possibility to NP loop, this is more a testament to the power of his ally sacrifice rather than any sort of great NP refund on his part. Instead, his looping composition requires the use of multiple NP Charge supports, which on his release is only doable with access to most (if not all) of the main support options. The fact that his ally sacrifice is tied to his NP also means that he often needs the help of a possibly MLB Kaleidoscope to get going, which makes him even more expensive to set up.

While Tactician’s Cherished Desire’s buffs are very powerful, they only last for 1 turn. This means that Chen Gong is less suited for fights featuring the Break mechanic, and will often need the help of another damage support to fulfill the team’s damage needs. He also lacks long-term HP restore and/or hard defensive skills, making him fare less well in battles of attrition.

If Chen Gong is to be used as a support in Buster teams, maxing Tactician’s Cherished Desire is very recommended. Leveling his Tactician’s Advice is also useful in more lengthy fights; meanwhile, Scapegoat can be left at a lower level in most cases, especially if materials are a concern.

Chen Gong is one of those Servants who benefits greatly from having access to a Kaleidoscope (MLB). Naturally, Starting NP Gauge Craft Essences are good options for him in general, with a preference towards Arts Performance Up, NP Damage Up and Attack Up as secondary offensive effects. NP Gauge when Defeated is also a notable option.