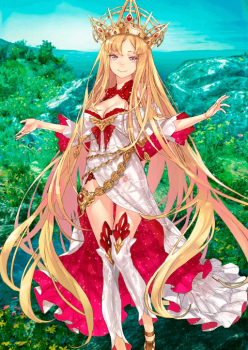 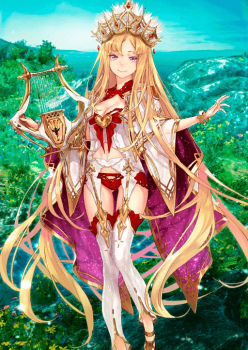 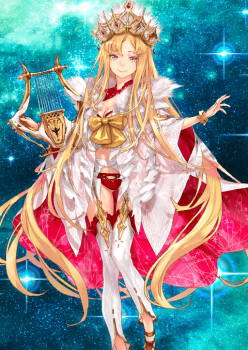 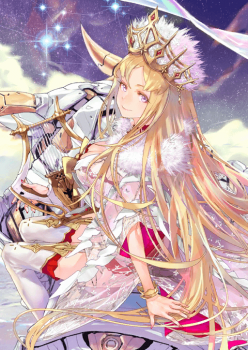 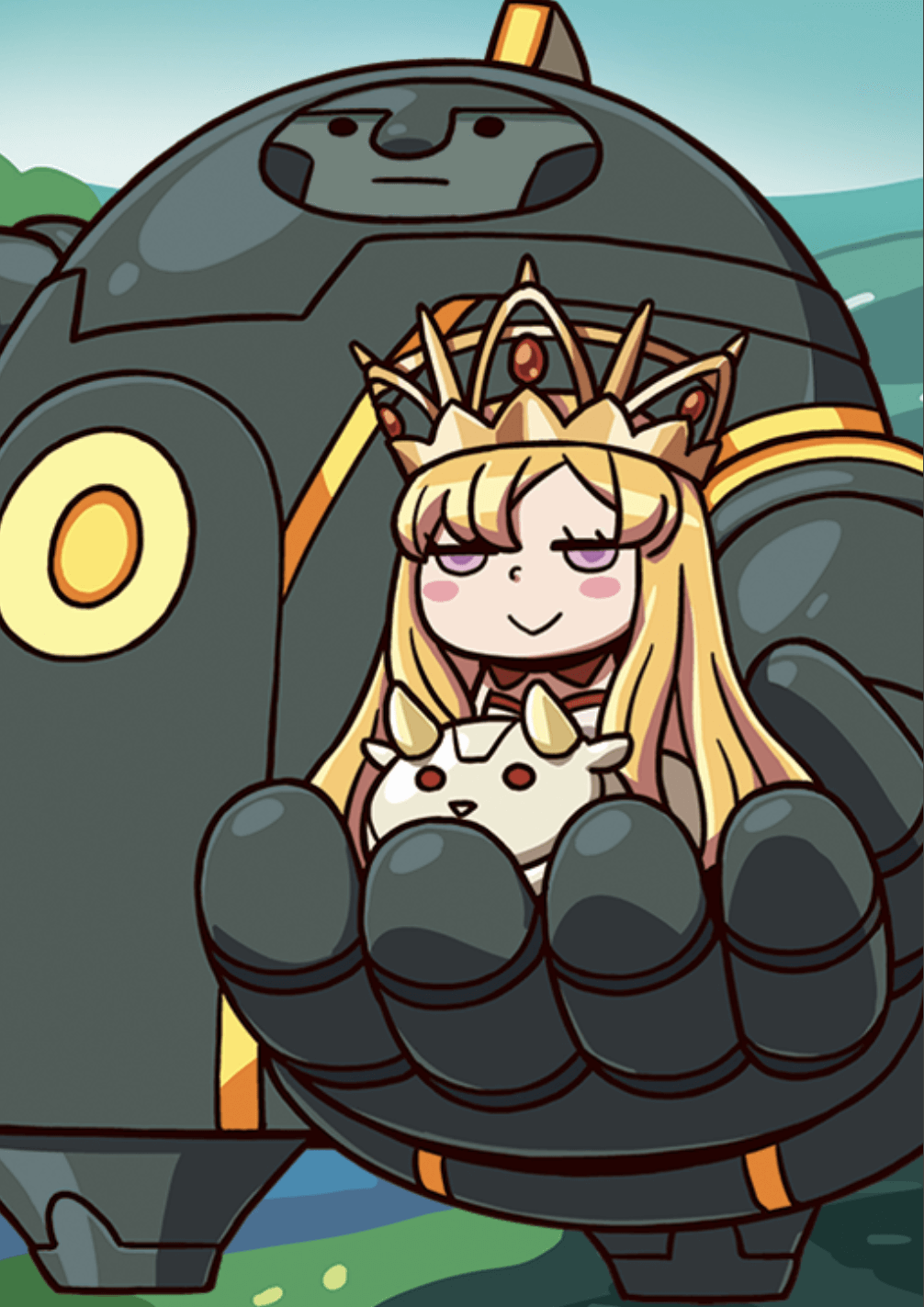 Apply Invincible to self (3 times).
Increase own Debuff Resist (3 times).

Grace of the King of Gods A+

Deal heavy damage to all enemies.
Increase own DEF by 50% (1 turn).

When equipped on Europa,
Increase all allies Arts and Buster card effectiveness by 10% while she is on the field.

Grandmas have always been a small subset of Servants in FGO, and Europa came in deciding she wanted to compete against the likes of Helena and… that’s about it. Using a bull as a mount, she serves as a dual power with a bulwark defense and a standard power noble phantasm, making her a Buster AoE Rider. She also is well known to hand out candy to good children.

Europa can contribute majorly to newer Masters through her combined strong defenses and damage. With her combined powers of Grace of the King of Gods A+ and her Noble Phantasm Sfyrí tou Tálos she gains essentially a 50% Buster boost for the turn similar to Mana Bursts. Combined with the Defense down of The King of Gods' White Bull C this puts her damage on the upper side of AoE Riders. On the other side of the coin, she has very high durability thanks to Innocent Princess B’s boosts to her immunities to both damage and debuffs, as well as her Noble Phantasm giving her 3 turns of 50% increased defense. Her NP gain also is nothing to scoff at.

Unfortunately, she lacks many of the tools which would make her appear desirable to more experienced Masters. She only has a 30% charge when many other AoE Rider options have a 50%, and she is Buster based, making her ability to charge and recharge her gauge comparatively more difficult than her counterparts. Her damage, while being on the high side of Riders, is one of many on the higher side. And while her defenses make her a potential challenge quest staple, her AoE Noble Phantasm doesn’t pack the punch that single target Riders have.

A new Master would do wonderfully with Europa as a centerpiece of their team capable of dealing damage and taking it as well, with her durability being an excellent asset for Masters with developing rosters. For more experienced Masters, Europa offers defensive options that are quite notable even among those sharing her class and rarity, although she may not necessarily be the first pick due to her NP gauge charge options. But as far as being the most adorable granny, Helena still has her beat!

Europa has a three-turn Buster up buff combined with a Buster up overcharge on her Noble Phantasm, which allows her to hit rather decently against her opposition. With a 20% defense down on her third skill and outside support she could hit the top tiers of damage among Riders.

Europa may be one of the sturdiest Servants in the game. On one end, she has immunities on her first skill with a 3-hit Invincibility which never goes away, and 100% Debuff Resist, also 3-time with infinite duration, which essentially acts as debuff immunity save for a few rare situations. On the other, she gains a whopping 50% defense each turn she uses her Noble Phantasm. On a third, she can limit enemy incoming damage with her AoE Charm potential and crit chance reduction. There is very little one can do to damage her at full force.

While Europa’s Arts cards are fairly pedestrian with a 0.58 NP gain rate and 3 hits, her second skill boosts Arts effectiveness by 30%. If given the right cards she will regain her lost NP gauge in a hurry.

Europa is great for newer masters, offering them what they need, but for an experienced Master there is nothing truly irreplaceable about her. Other Servants have easier access to NP gauge or adequate defenses which makes her nothing special.

While she enjoys the abilities of an AoE charm, it has only a 60% chance of success. In a critical situation, it could fail and she or the party could be hit at a bad time.

Europa fits the trait of “Jack of All Trades, Master of None.” She is great in a challenge quest by putting up a bulwark defense for herself, but at the same time her Noble Phantasm, by its AoE nature, will not do the damage to end the quest as quickly against high-HP bosses. At the same time, in farming she lacks the ability to loop, so she’s a slower option than others which already exist.

Europa’s skills are all about boosting her damage and her defenses, and thankfully are split apart so Masters can choose to use offense without sacrificing defense. However, her offense scales and her defense for the most part does not, so Masters will want to concentrate on offensive skills first.

As a damage dealer, Masters will want to access her Noble Phantasm as quickly as possible with a Starting NP Gauge CE. They also could sacrifice initial speed for a Mixed Damage / Starting Charge CE for more consistent and stronger damage. Europa, as a charmer, also benefits from Charm Rate Up CEs.

A princess of Greek myth, Europa is best known as one of the many consorts of Zeus, the king of the Olympian gods. She is the daughter of the Phoenician King Agenor and Queen Telephassa, though some say that she is instead the daughter of Agenor's son, Phoenix. Whatever her lineage, the fact remains that she was born a princess.

Europa received three gifts from Zeus: a bronze Tálos, a hunting dog, and a javelin. After her death, Europa was deified, and the white bull that carried her on its back later became the constellation Taurus. One theory holds that Europa's name is the origin of the name of the continent Europe.

She sees herself more as a mother goddess than a divine consort, and so she considers all European Heroic Spirits that lived after her time to be her grandchildren or descendants.

A gentle and compassionate princess. She's carefree, unassuming, good-natured, and she doesn't dwell on the small details. Her typical reactions to most things are to smile warmly, to be spaced out, or look sleepy. She does not flinch even if Divine Beasts or giants appear before her, and she didn't even panic when she was kidnapped by the king of gods. One can only conclude that she is either naturally ditzy or that she carries herself with dignity appropriate to a consort of a god...

A fellow goddess and divine consort once remarked, "She probably doesn't even have a grasp of reality." And yet Europa simply smiled when she heard that.

Grace of the King of Gods: A+
Europa was deeply loved by the highest being in Greek mythology: Zeus. As such, this skill provides numerous protections. It does risk invoking the wrath of Zeus's wife Hera, but Europa herself doesn't seem to mind, since in her eyes, Hera is a great goddess who should be revered and respected.

The King of Gods' White Bull: C
The white bull that Europa encountered—which was Zeus taking the guise of the bull—was a Divine Beast that possessed strong Charm, and it is the bull that was later made into the constellation Taurus. It is said to captivate anyone who lays eyes on it. This skill derives from the bull Europa rode, rather than from the goddess herself.

Beloved White Bull.
A continuously active Noble Phantasm. The white bull whose form Zeus took as his avatar...or at least something closely resembling it. This Noble Phantasm was a gift from Zeus to Europa to protect her, and initially it appeared as a hound, just like in the myth. However Europa was heard to say, "I'd rather have it look like you. It would look so lovely, and it would be a perfect pillow." After she said this, it changed form.

It constantly protects Europa when she rides on its back, and is capable of traveling anywhere, even over the surface of the sea. This Noble Phantasm is the very reason Europa manifested as a Rider. The moment its True Name is revealed, it should be able to gallantly run through enemy territory, but its True Name will not be revealed in this game.

As a side note, the skill "The King of Gods' White Bull" has been assigned thanks to this Noble Phantasm.

The Bronze Giant's Super Massive Hammer.
Another Noble Phantasm that was gifted by Zeus. It's the bronze monster Tálos, an autonomous machine from the Age of Gods. This incredible weapon was crafted by none other than Hephaestus, one of the twelve gods of Olympus, and it was bestowed upon Europa by Zeus himself. The Noble Phantasm's sole and ultimate purpose is to protect Europa at all costs. Its durability is remarkable, and not even the gods can readily destroy it. While originally not a giant, but a monster, the fact that it was frequently mistaken for the Colossus of Rhodes has caused it to take the shape of a giant we see today.

It automatically detects and annihilates enemies. When it gets angry, its limbs become red-hot as it lunges at the target, and any ordinary creature would disintegrate in an instant on contact. In this game, the giant is summoned every time it's needed for attack, or when its True Name is revealed. It then detects its enemies and instantly flies into a rage. Its scorching hot iron fist hammers down into enemy territory.

Long ago, on the Island of Crete, Europa often rode on Tálos's shoulders for fun, but this was very troubling for Tálos since it heats up whenever it gets angry. Please come down, my mistress. Tálos doesn't like the witch Medea. During the Age of Gods, she managed to attack its weakpoint—the heel—and the blood of the gods, known as ichor, which was also its source for magical energy, spilled out and immobilized it.