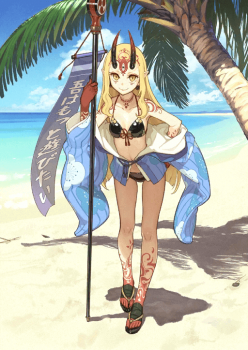 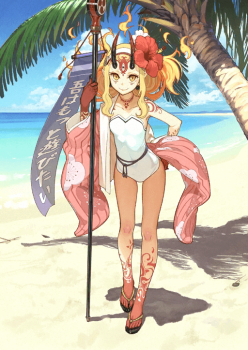 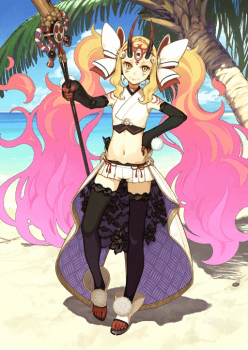 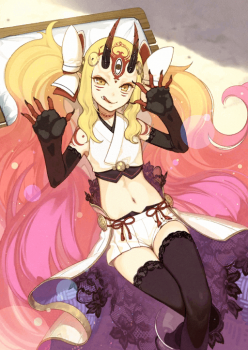 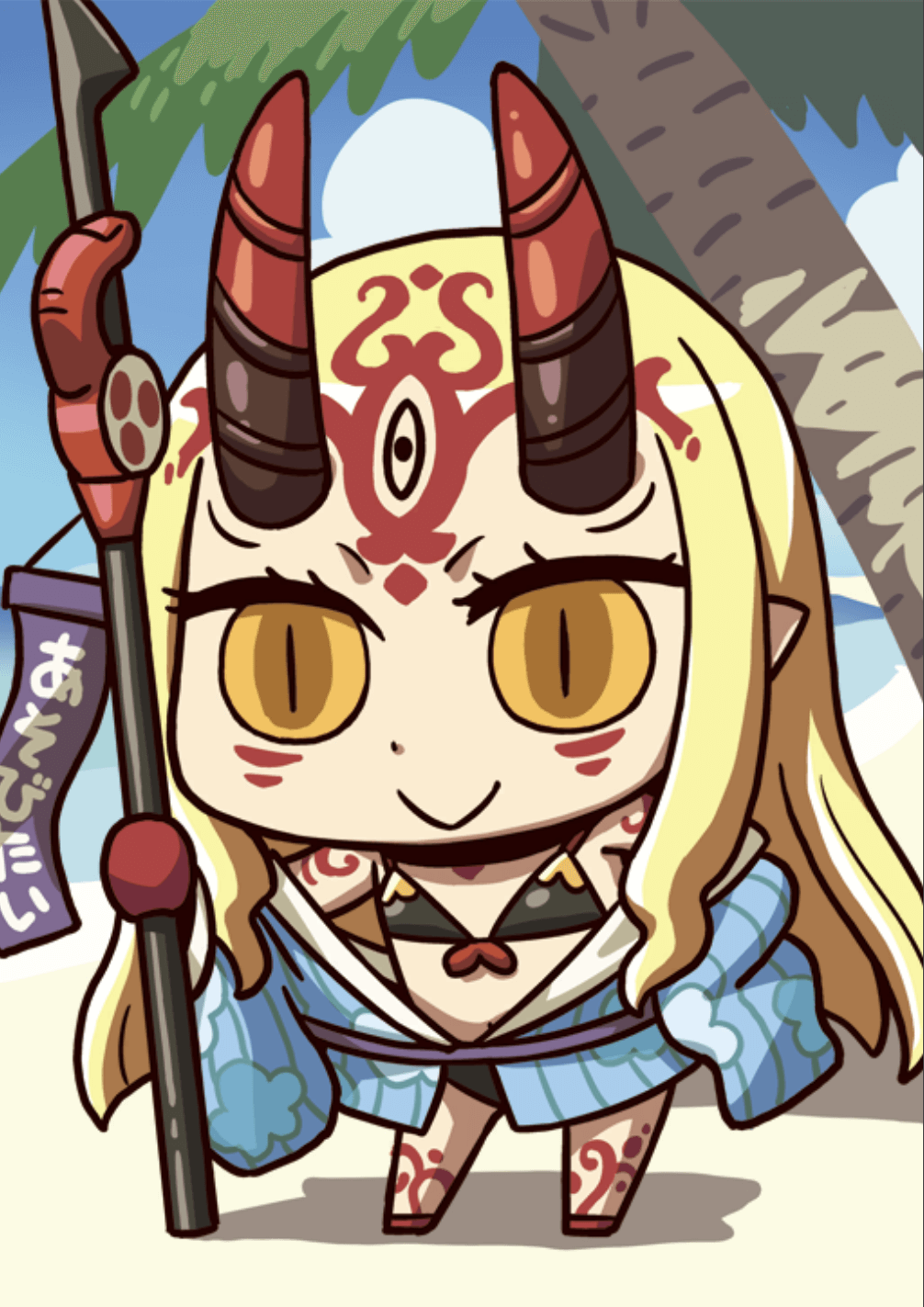 Self Star Drop Rate Down [Demerit]

Demonic Nature of Oni (Water) B

Deals damage to a single enemy that ignores DEF Up.
Decrease your C Star Drop Rate by 50% (3 turns). [Demerit]

When equipped on Ibaraki Douji (Lancer),
Increase all allies' Buster Card effectiveness by 10% and Critical Damage by 15% when she is on the field.

Looking to go to a festival and eat lots of delicious food, Ibaraki Douji decided to change her Saint Graph so she could attend. In doing so, she exchanged her defenses for Critical Damage, which combined with her Buster ST Noble Phantasm makes her deal sizeable damage as a Lancer, even if she is kind of short.

Just like her Berserker counterpart, Ibaraki excels in sustained damage. Her Demonic Nature of Oni (Water) B allows her to buff up damage for a nice three turns, and she can get a Critical Burst turn with Summer Time Trouble Girl A’s gathering. Speaking of Criticals, she benefits from gaining a ton of stars on her Noble Phantasm as well, creating more potential sustained damage as the fight continues. For survivability, she still has her cleanse with I'm Not Going Home Yet! B++, which also comes with a Max HP buff, although she loses her Defense up skill from her Berserker form. This is not all that big of a loss as, owing to class advantage, she will be receiving half damage instead of double damage, making her much more durable as a Servant.

Unfortunately, Ibaraki loses a lot of what made her special as a Berserker, which is her burst turn damage. She also lacks any kind of hard survival, making it easy for her to fall to enemy Noble Phantasms. There are also a few demerits in her kit which make using her a bit of a give-and-take game.

Overall, Ibaraki works well for a Master looking for sustained damage, but not so much for Masters looking for a Lancer to burst down the enemies. Just make sure to bring her lots of food for all the work she’ll be putting in!

Ibaraki benefits from keeping her damage up long after her Burst Turn. Demonic Nature of Oni (Water) gives her three turns of Attack up, along with the rest of the team, and she has the ability to both gather Critical Stars and increase her own Critical Damage. The higher cooldown of the skill could force her into at least three turns of downtime, but that is usually compensated by other supports. With her Noble Phantasm providing her with a pocket full of stars, this can serve to keep her sustain going for an extra turn.

Ibaraki has a fairly large HP pool, and is able to further increase it with her I'm Not Going Home Yet! skill. This, with the addition of her resistances against Archer enemies, makes her much more durable than her Berserker form. Gaining further defenses from supports would make her very hard to kill indeed.

With a decent base NP gain rate, halfway decent hit counts, and a skill boosting her NP gain, Ibaraki can charge her gauge at a good enough speed to fire it more than once in a longer fight. She’s still lacking a second Arts card, but her deck’s NP Gain is not as bad as a gorilla (triple Buster) deck.

When Ibaraki needs to dish out damage, she’s not the best at it. Her Noble Phantasm suffers from only having Madness Enhancement D and two small damage buffs, leaving her with less damage per burst than many other single target Lancers. Her Critical boost partially makes up for it, but against her middling attack stat (for her rarity) and lack of a third Buster Card, this is not as good of a boost as it may seem at first glance.

While Ibaraki has a cleanse and an ability to boost her Max HP, she cannot negate enemy damage in any way. She will be taking the full brunt of every hit and will need external support to survive enemy Noble Phantasms. Being a sustained damage Servant, she will likely experience at least one of them.

Whenever Ibaraki uses her Noble Phantasm, her Critical Star drop rate is cut in half for three turns. This is worse than it seems as her Noble Phantasm generates a ton of Critical Stars, and the following turn she often will want to gather the stars to herself with her third skill, dish out Critical hits, and generate more stars to keep her sustained damage going for another turn. While her second skill can cleanse this debuff, it also is tied to her survivability and may not be the most ideal usage of her cleanse skill.

Ibaraki is a sustained damage Servant, so her skills are focused around keeping her sustain active. As she has Lancer typing, her survivability is less important than her Berserker form, as she’ll be taking less natural damage per turn in most cases.

Despite not having as powerful burst damage as other Lancers, Ibaraki is still a damage Servant, which means she benefits from the standard CE set. Starting NP Gauge CEs provide her with earlier access to her Noble Phantasm, Mixed NP Gauge / Damage CEs that provide Buster Performance, NP Strength, or Attack Up give her boosts in damage in exchange for needing more support, and pure NP Strength CEs provide her with stronger burst turns if a Master can fully charge her NP.