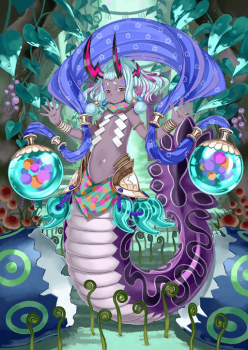 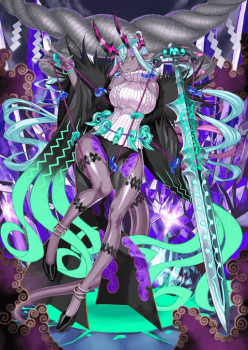 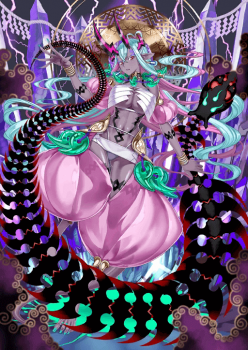 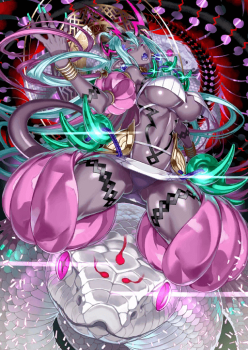 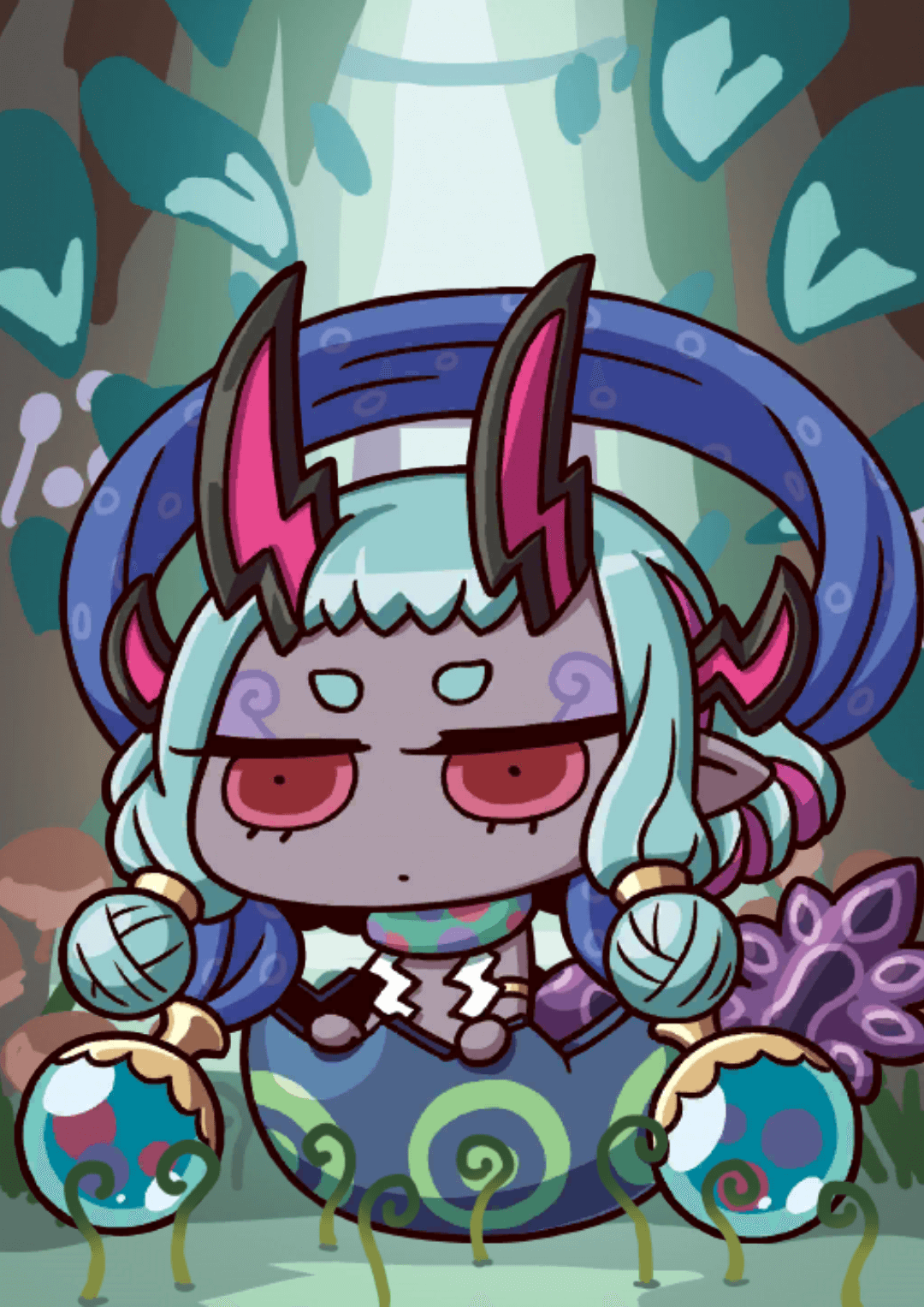 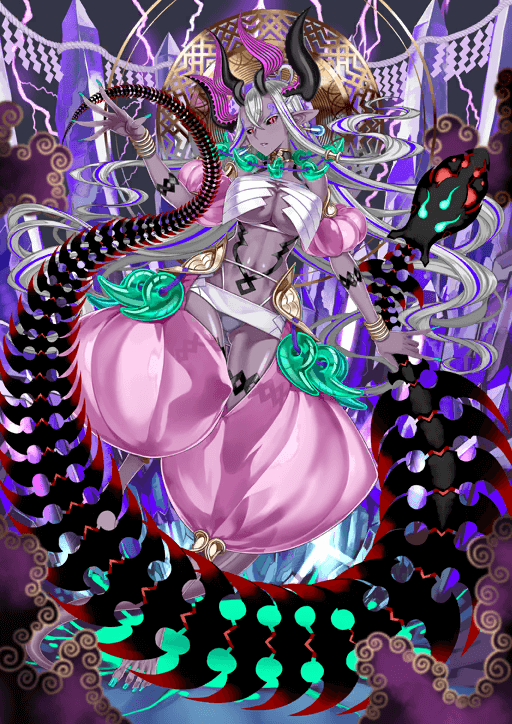 Strength of Mountains and Rivers A+

Fingertips of Defilement A

Increase your Quick Card effectiveness by 9%.

Increase own Buster Card effectiveness by 12%.
Apply Damage Cut by 200 to self.

Core of the Serpent God A

Apply Damage Plus 250 to self.
Increase own Buff Removal Resist by 20%.

Sword of Gods - Kusanagi-no-Tachi A+

Shinken - The Blade of Kusanagi

When equipped on Ibuki-Douji,
Increase Buster cards effectiveness of all allies with [Divine] Trait by 20% when she is on the field.

“Come here, come here. Ehehe, there is nothing to be afraid of. I won't break you. I would only play rough enough to break you if my Saint Graph was in a state where I am unaware of delights”

Descended from Mount Ibuki like a natural disaster, the avatar of the mythical serpent Yamata-no-Orochi - Ibuki-Douji is a Buster-centric Saber that can mow down legions of enemies with her otherworldly strength. Possessing a straightforward yet powerful skill set, Ibuki-Douji is a stellar pick even amongst the highly competitive selection of Saber Servants, and certainly one that most Masters should consider for their roster, be it for farming or challenge quests.

Ibuki’s massive frame makes it quite obvious that her physical prowess is not to be trifled with. All three of Ibuki-Douji’s skills share the same characteristic of being an immense power boost to her already impressive natural high base Attack, a triple Buster cards deck and a selection of simple but great passives. Strength of Mountains and Rivers is both her NP Battery and main steroid, boosting her Attack for 3 hits within 3 turns, ensuring Ibuki has no problem accessing her Noble Phantasm and hitting hard at the same time. Octo-Pulsing Billow further amplifies her firepower through boosting her Buster Cards’ effectiveness for three turns, on top of an extra Defense buff and a 20 Critical Stars bomb. Finally, Fingertips of Defilement rounds out Ibuki’s offense by granting her a strong Critical Damage boost and anti-Undead power mod, with a single target NP Seal debuff to a random enemy as the icing on the cake. Ibuki’s Noble Phantasm - the legendary sword Kusanagi - is one of the rare AoE Noble Phantasms in the game that will almost always hit for full damage, thanks to applying Ignore Invincible and Ignore Defense to Ibuki before dealing damage. Putting everything together, it is quite apparent that this Serpent Goddess is an offensive powerhouse that would excel in both wave clearing and single-target damage. While her effects and skills look rather simple, their potent value means both her face cards and Noble Phantasm hit exceedingly hard and consistently.

But even a goddess can have imperfections. And one such is Ibuki’s lack of hard defense. While her natural bulk is respectable thanks to her Defense buff and Damage Cut passive, Ibuki does not have the means to avoid massive hits. Without teammates covering for her, this can pose a major problem in high difficulty content. Furthermore, outside of a single-turn Critical Star bomb, Ibuki lacks other means to continuously dish out high damage Critical Hits, making her inconsistent as a Critical Damage Dealer without external support.

Ibuki-Douji is the epitome of the simplest form of gameplay in the game, and she is very effective at it. Her strengths are easy to utilize while also leaving ample room for a high performance ceiling through proper strategy and team building, and her weaknesses are not anything close to crippling. The Buster AoE Saber role has traditionally been an overcrowded niche, but Ibuki still easily stands out as a premier pick for any Master.

Thanks to her several different high-value steroids that last over multiple turns, fantastic base Attack, and triple Buster deck, Ibuki-Douji’s damage output is both impressive and consistent. Both her face cards and Noble Phantasm can deal massive damage even with just her buffs and scales very well with further amplification. Her Critical Damage potential is also not to be understated, with a powerful Critical Damage buff and on-demand Critical Star Bomb.

Packing a 50% NP Battery, Ibuki is in rare company as a top-tier wave clearer. In the right setup, Ibuki can utilize her Noble Phantasm several times consecutively. With Append Skill and the arrival of the long-awaited Koyanskaya of Light and Oberon, Ibuki becomes a reliable wave-clearer for any Lancer-related nodes.

Ibuki has some neat effects on her skills that might go unnoticed at first. NP Seal, Ignore Invincible, Ignore Defense, and Anti-Undead bonus damage are all valuable effects that may swing the tide of the battle in many difficult quests.

Ibuki-Douji is naturally bulky thanks to her high base HP, Damage Cut passive and Defense Buff, but these are not enough in the face of hard hitting bosses. For any long battle, it is highly advisable that she is deployed alongside teammates that can provide her other forms of protections such as Evasion or Invincibility.

Outside of her Star Bomb on her second skill, Ibuki-Douji does not have any other reliable means to supply Critical Stars for her monstrous Buster cards. This may prove to be a headache to utilize her optimally, as sometimes the timing of her second skill will not coincide well with her cards being chosen, and over the course of any long battle, it is highly likely that her Critical Damage buffs might be wasted.

All of Ibuki-Douji's skills are incredible and should be leveled. It is highly recommended to max her first skill as soon as possible, as both of its effects are very potent and necessary for her to function. From then, her second skill will be a better option to prioritize as it improves her damage in general, while her third skill leans toward more utility and Critical niche.

Ibuki-Douji is a very simple Servant to pick Craft Essences for. The one stat she loves the most is Starting NP Battery, as it facilitates her Noble Phantasm. Other than that, Ibuki does appreciate a boost in NP Damage, as this is the one buff type that is missing from her kit. Critical Damage, Buster Card effectiveness, and Attack Up are also decent choices to bolster her offensive capacity. As a Damage Dealer, it is without question that Ibuki-Douji will vastly prefer Craft Essence which grants Attack over HP.

Upcoming GSSR Lucky Bag 2023 Summoning Campaign New Year Special targets?
Come New Years, NA will have a GSSR banners up: JP 2021, for reference As usual for…
Who are your 2023 (and 2024?) gacha targets?
As 2022 winds down, I’ve been looking ahead at future servants to understand how much…
Arts Reigns Supreme! - Interlude Campaign Part 15 Roll Thread
Interlude Campaign 15 has arrived, and with it we have 3 spectacular Arts Single…
Busti’s Stall Diary Chapter #572: Light & Darkness
One cannot live without the other. Light needs darkness as much as darkness needs…
Interlude Campaign: Part 15 Discussion
This is NOT the roll thread, so don’t post those here (but good luck for anyone…
Read More