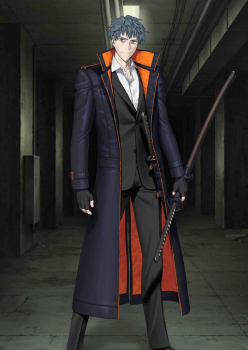 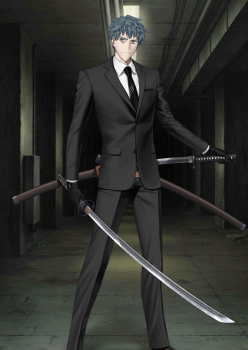 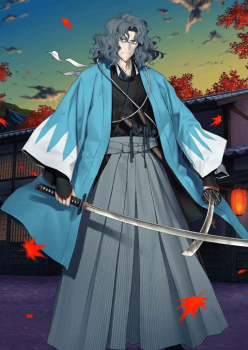 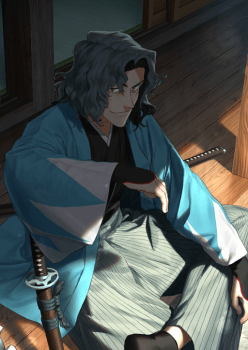 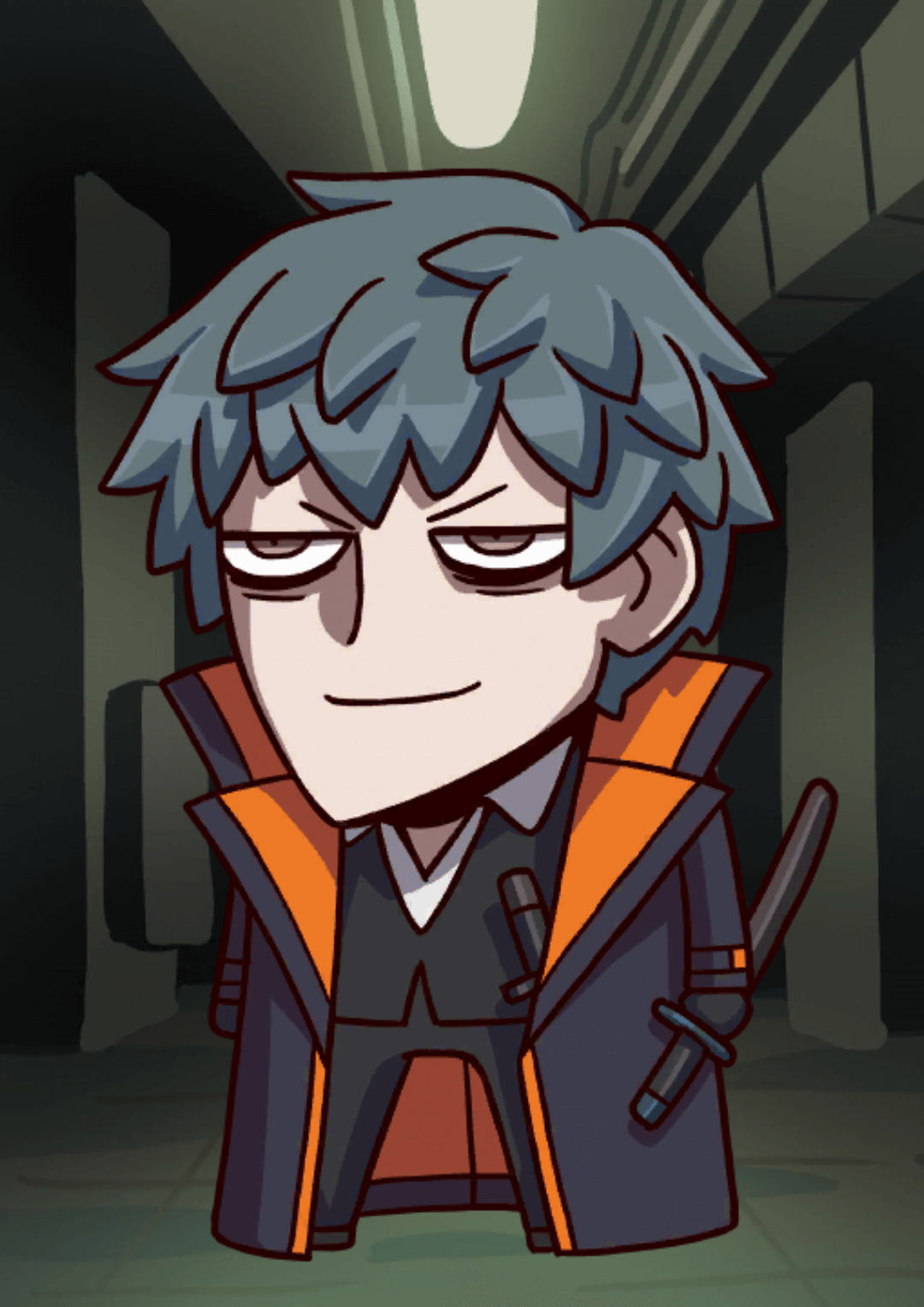 When equipped on Saito Hajime,
Increase all allies Arts and Buster cards effectiveness by 10% while he is on the field.

“Put some affection in it and call me Hajime-chan.”

For the longest time, Waver has held the distinction as the only Servant dressed in a suit. Hajime decided he didn’t like that, so he came along stealing Waver’s signature wardrobe. To really make his mark, he also became a top tier Single Target Arts Damage Dealer with critical capacity, hoping to supplant Waver as the ultimate suit-wearer.

Hajime’s biggest strength comes from his damage. With both an Arts up from Freely Drawn Sword and an attack up from Invincible Sword, his raw damage from his Noble Phantasm is top notch. Not only that, but thanks to his 7-hit Noble Phantasm, Formless, and high innate NP gain, he has the potential to refund well over 50% of his gauge every time he uses it, especially if paired with premiere Arts Support such as Altria Caster. He also has quite the critical capacity with a full 100% up from Invincible Sword. He’s also pretty beefy thanks to Mind's Eye (True)’s evasion.

Unfortunately, Hajime is a bit of a challenge to use. His attack up only will last for 3 hits, meaning a Master fighting a boss wanting to use his Noble Phantasm multiple times will have to burn hits with support Servants. He’s also quite selfish, making it hard to use him in anything other than a team designed around him.

Hajime is a well rounded Servant who would serve as a primary damage dealer against Lancer or Berserker bosses, especially if one owns Altria Caster. Or a Master could just marvel at how sharp he looks in a suit.

Thanks to having both an Attack up and an Arts up, combined with an Arts resist down on his Noble Phantasm which activates before damage, Hajime can pack a major punch against single targets. Even better, if it is a boss who will not go down in one Noble Phantasm, the Arts resist stacks mean his next hit will be even harder. Given the likelihood of one having multiple Noble Phantasms with him, this is quite applicable.

Hajime has a Noble Phantasm with a whopping 7 hits. When combined with double Castoria, this will easily refund 50% of a charge. With the right CEs and turn usage, he will be able to use 3 straight Noble Phantasms which, given the break bar nature of bosses, may be enough to destroy them.

When the meta changed from Quick to Arts, one thing lost was the massive criticals of Quicks Skadi would provide. Hajime avoids that with a 100% Critical damage up of his own, which combined with Arts buffs, will do high damage.

Thanks to his second skill, Hajime is great at staying on the field with a hard evasion and extra beefiness to his Defense.

When a Master uses Hajime, they will likely want to use him on a break bar Servant requiring multiple Noble Phantasms to clear. As his attack up (30%) only lasts for 3 hits, Masters would want all 3 to be his Noble Phantasm in loop. So Masters need to be careful not to select one of his cards every turn, and pray a situation does not arise where 4 or 5 of his face cards are available at once to force a wasted hit from him.

Every skill Hajime has is about Hajime. Masters should not expect to use him in a party of multiple damage-focused Sabers. The most efficient way to use him is to clear the node with Hajime or bust.

Hajime’s first and third skill are all about increasing his damage potential. Freely Drawn Sword is only recommended first because of its potential to help him loop. Mind's Eye (True) is a nice evasion, but can be left for last.

Hajime really shines through as a potential single target looper against Lancers. He will need either a MLB Kaleidoscope or regular Kaleidoscope + 2nd append skill maxed. Masters would want to use fragment of 2004 for the mystic code. Simply give him all arts buffs and the 2004’s NP gain buff on turn 1, and activate his skills. This will refund 57% of his NP bar. Use one Castoria’s buffs to get him to 100%. His second NP will refund 50%. Use the other Castoria’s buffs for the final NP fill.

Saito Hajime, the third unit captain of the Shinsengumi, a police force that served in Kyoto at the end of the shogunate.

He was one of the best swordsmen in the Shinsengumi, on par with Okita Souji and Nagakura Shinpachi, but his origins and the school of his swordsmanship are unknown.

Height/Weight: 178cm, 77kg
Origin: History
Region: Japan
Alignment: Lawful-Balanced
Gender: Male
"School of discipline? Doesn't matter to me. Then again, as I am now, I might call it the peerless style."

One of the few members of the Shinsengumi who fought and survived through the turbulent period of the Bakumatsu until the start of the Meiji period, and lived out his life.

His swords skills were prominent among the Shinsengumi, and the Second Unit captain Nagakura Shinpachi dubbed Okita Souji the Stalwart Sword and Saito Hajime the Invincible Sword. He was said to have undertaken many undercover missions, such as purges within the units, and one theory even states that he was a spy sent into the Shinsengumi from the Shogunate or Aizu clan.

In fact, his behavior during his time in the Shinsengumi was often suspicious, and he seems to have held a sort of special position among the ranks.

He may appear to be a lovable goof at first glance, but he at times shows much shrewder, more serious side. That said, he believed in living a flexible and adaptable life not influenced by existing values, despite being a member of the Shinsengumi, which tended to hold to traditional values.

"That sounds real good on paper, but in reality all I do is stick around as long as things seem fun."

As you can see from what he says above, he's kind of a jokester, so Okita gave him the unfortunate nickname Snarksengumi.

His loves noodles, and after eating croquette soba when he manifested in the modern world, it quickly became his favorite.

"Dipping croquette in soba is such an unpretentious, yet delicious dish. It's the best."

Invincible Sword: A
A term that described Saito's remarkable swordsmanship, which was said to be one of the best in the Shinsengumi. While Saito's style did not follow a specific discipline, and was at times considered to be the Mugai-ryu (outer nothingness) or Itto-ryu (one-sword school), in truth, Saito's style was unrestrained and free-spirited.

Freely Drawn Sword: B
A sword drawing technique that can freely change forms when the user unsheathes his blade in each hand. A swordsmanship independent of form, changing in all directions from the tip of the sword. It's a specialized combat technique that makes it extremely difficult to predict where his strike will fall.

"My dominant hand? I just use whatever hand is easier at the time. Besides, if you got time to be worrying about things like that, just start cutting already."

Mugyo.
A special move by Saito Hajime, the man dubbed the Invincible Sword, who slices from the bottom to the top. This freestyle sword does not employ any specific form.

He approaches the target in a unique way, different than rushing in with pure speed, and his moves distort the target's perception of time and distance. He then then slices up the target in an instant. Since the target assumes they are far enough away that the blade cannot reach them, they are invariably surprised to experience the flurry of cuts.

No matter what kind of melee weapon the target uses, be it spear, sword, or anything else, Saito always makes the first move from any distance, ignoring the target's reach.

"And that's why my sword is invincible!"