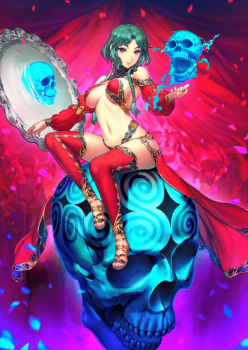 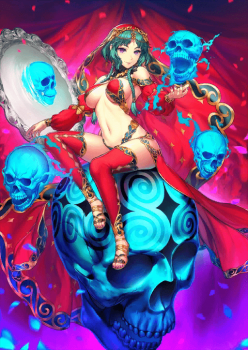 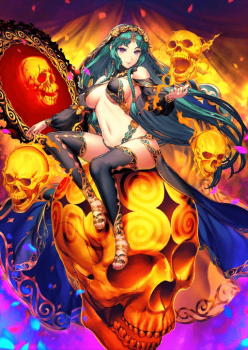 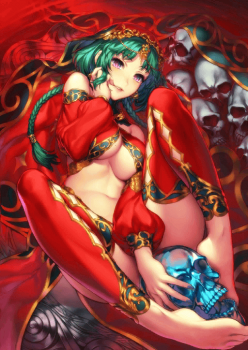 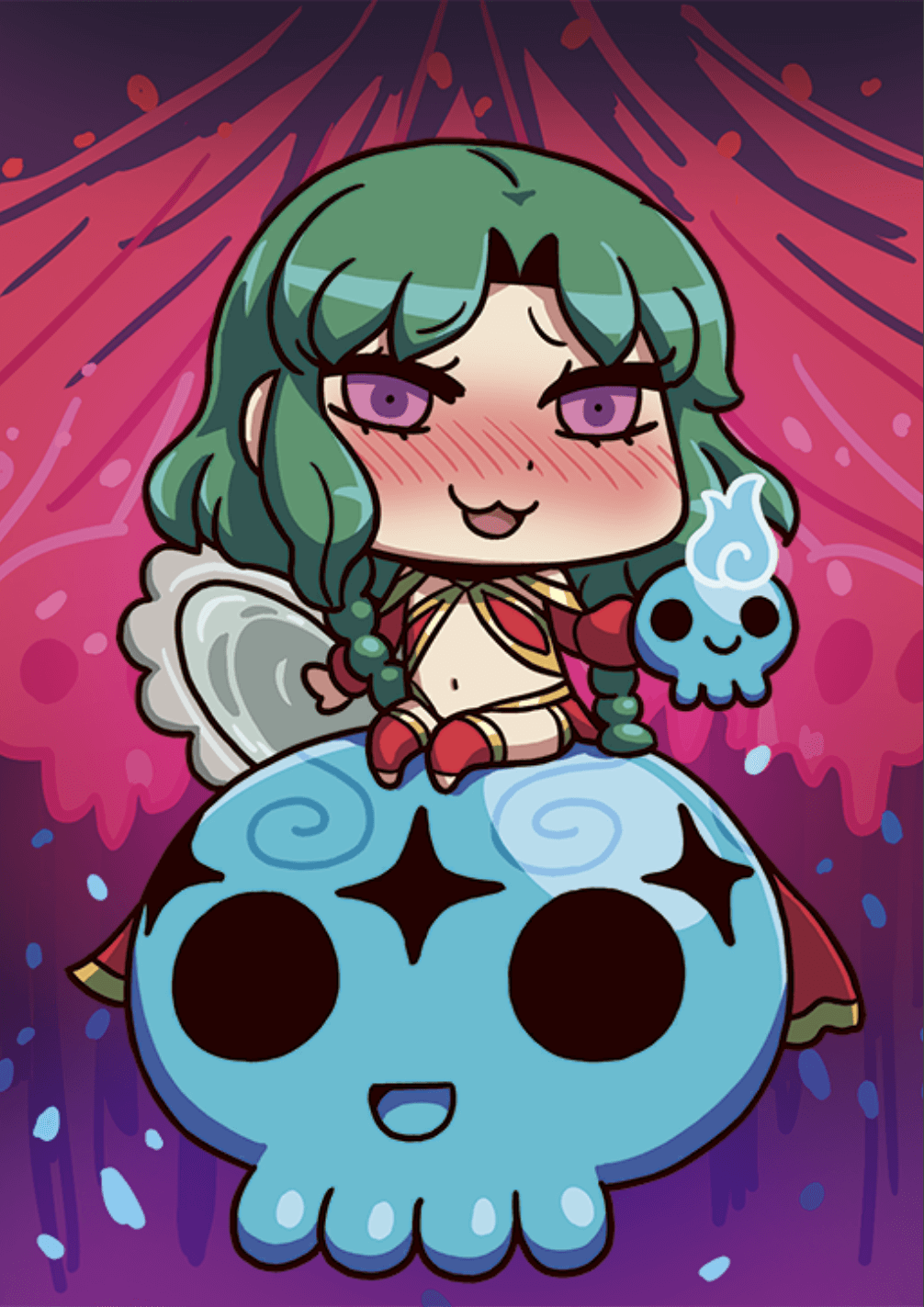 Dance of the Seven Veils A

Recover own HP every turn (7 turns).
Apply recurring buff to self: [Remove 1 Defensive Buff from self each turn] (7 turns). [Demerit]
Apply delayed buff to self: [After 7 turns, Increase NP Gauge for all allies] (1 time).

Increase your Buster Card effectiveness by 5.5%.

Apply Curse Damage Up to a single enemy (5 turns).

My Kiss To You

When equipped on Salome,
Increase all allies' Damage to Enemies with Lawful - Good trait by 20% when she is on the field.

“Can I have your head? Thanks!”

Infamous for having John the Baptist beheaded, Salome is perhaps the strangest member of the fourth anniversary bronze Servants. Salome is notable for having an unusual and tricky-to-use gimmick that can allow for some powerful, situational setups under the right conditions. Focusing on her gimmick, however, obscures Salome’s less-interesting but more-important traits: she’s a free, class-neutral Arts Berserker, which means she has a place in less-developed rosters once Altria Caster arrives in the game’s fifth anniversary.

Salome’s most striking skill is Dance of the Seven Veils, which grants the party a huge delayed NP charge if Salome remains alive. This skill is generally impractical, but it does allow for some interesting gimmick setups using Salome. Outside of those setups, though, Salome has the skill Blood-Soaked Silver Platter, which provides long lasting damage boosts that, in conjunction with Salome’s single-target Noble Phantasm, allow her to do reasonable damage over multiple turns. Salome also has Natural Body (Figure), which gives her some decent survival tools in general use contexts.

Salome does, however, have several glaring flaws. Most importantly, she is effectively a two-skill Servant in most fights, as Dance of the Seven Veils is not a generally-useful skill. Her damage output is also not as impressive without the Lawful Good niche on Blood-Soaked Silver Platter. Furthermore, she has weak NP gain relative to comparable Servants, which makes it difficult to fully leverage her potential strengths.

Salome is nice in that she has some appeal to both undeveloped and highly-developed rosters. For Masters without many strong Arts alternatives, Salome provides a reasonably effective Servant who works almost anywhere and is a particularly effective counter to most Rulers. For Masters with stronger alternatives, Salome is a unique and interesting gimmick Servant who can be fun to use if not overly practical. She isn’t a standout unit by any means, but she has clear use cases and can be valuable in those contexts.

Dance of the Seven Veils removes one of Salome’s defensive buffs every turn, and then charges the entire team’s NP gauges by 100% if Salome is still alive when it ends. As Salome is a low-rarity Berserker, it is difficult to keep her alive through this, but teams specifically built to leverage this buff can enable some powerful strategies.

Blood-Soaked Silver Platter boosts Salome’s attack for 3 turns and gives her a significant damage buff against Lawful Good enemies. An NP5 Salome does respectable damage on her NP even without the Lawful Good buff, and with the buff in effect, her damage competes with top-strength NP1 Arts Servants.

Natural Body (Figure) gives Salome multiple defensive tools that contribute to her stability. None of the defensive buffs it provides is individually enough to keep her alive, but in conjunction with team support, Salome can stay alive reasonably well.

Salome is unlikely to ever use Dance of the Seven Veils except in teams specifically built to take advantage of it, which means Salome effectively has only two skills for general-use. Those two skills are reasonably strong, but this still leaves Salome with less flexibility than a typical Servant.

While Salome has very good damage against Lawful Good enemies, her damage is less impressive outside of that niche. She still outputs enough damage to be useful, but without the Lawful Good niche in play, it is much more likely Masters will have other Arts Servants with higher damage and fewer drawbacks.

Salome has low Arts card NP gain relative to typical Servants with her deck, and her NP has relatively few hit-counts. This means Salome will have difficulty using her NP consecutively even with proper support, which limits her usefulness relative to her competition.

Blood-Soaked Silver Platter is Salome’s only damage boost, and higher levels give it both more damage and better uptime. As such, it should be leveled first, and ideally taken to max level. Natural Body (Figure) increases Salome’s survivability, but it scales poorly with level and maxing it out will have a fairly small impact on Salome’s performance. Dance of the Seven Veils is not useful in typical situations and can be left at level 1 unless Salome is being used specifically for its gimmick, in which case it needs to be max level. For general use, the only one of Salome’s skills that needs to be maxed is Blood-Soaked Silver Platter, as the other two skills have limited impact on Salome’s performance.