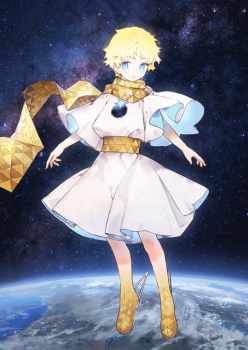 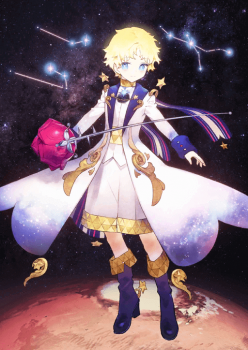 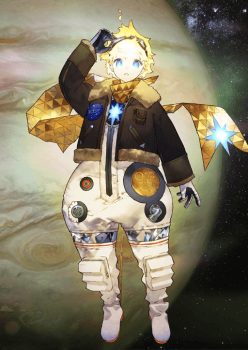 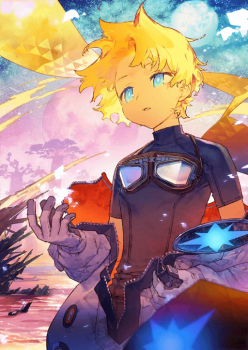 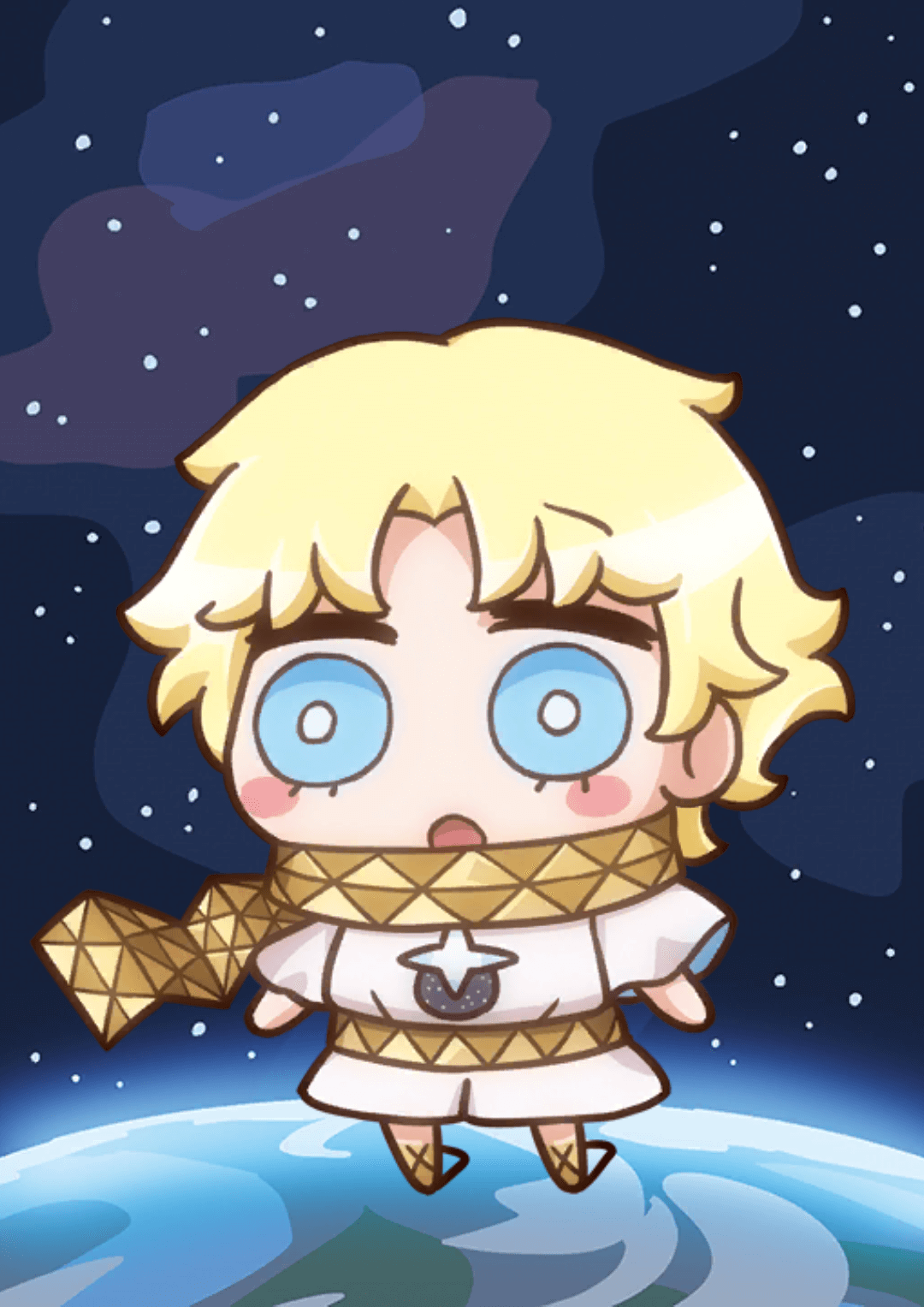 Voyager of the Stars A

Protection of World's End (Space) B

Entity of the Outer Realm C

Gain 2 Critical Stars per turn.
Increase your Debuff Resist by 6%.

Increase own Buff Removal Resist by 10%.

When equipped on Voyager,
Increase all allies' Damage to Enemies with Sky trait by 20% when he is on the field.

“Have you ever played hide-and-seek with a fox in a wheat field?”

Voyager is a delightful blend of space travel and the classic book “The Little Prince.” Not only is he one of the most unique Servants in the game conceptually, but he’s also pretty good mechanically. What Voyager lacks in raw damage, he makes up for in NP charge and party utility. He may not be as flashy as harder-hitting SSRs, but he does have a lot of nice tools and will happily keep his team using their NPs regularly.

Voyager’s biggest strength is his easy access to NP recursion. Voyager of the Stars gives Voyager a big NP charge, and Pale Blue Dot recharges Voyager’s NP further. His NP also charges his team’s NP gauges, helping supports or other damage-dealers to use their NPs as well. Furthermore, Voyager makes critical stars with Voyager of the Stars and Pale Blue Dot, and he increases the whole party’s critical damage with Protection of World's End (Space), letting anyone on the team output a little more damage.

In exchange for these strengths, Voyager has very low damage, suffering from both low attack and low innate damage boosts. Compounding this, Voyager is a Foreigner, which means he will very rarely benefit from offensive class advantage. Voyager also has weak normal cards in terms of both damage and NP gain, meaning he is heavily reliant on his NP in order to function.

Voyager has a lot of great tools in exchange for his low damage. Masters who really like him can aim for high NP levels in order to offset his weaknesses. For everyone else who pulls him, Voyager may not be the strongest damage-dealer, but his utility makes him a nice Servant in defense-oriented teams.

Between his AoE Quick Noble Phantasm, his 50% NP charge skill, and the party NP charge each time he uses his NP, Voyager can easily loop his Noble Phantasm. When he can deal enough damage, this makes him good at both farming and hard fights.

Each time Voyager uses his NP, he charges the whole team’s NP gauge. This is useful for helping support Servants access their NPs without needing to prioritize their normal attacks. It gives even more charge to living Servants (which means Pseudo-Servants, plus a few unusual cases like Shiki), which can be nice for specific teams.

Voyager makes stars with the hits on his NP, as well as from one of the effects on his first skill. His second skill, meanwhile, increases the whole team’s critical damage by a bit and lets him focus stars to one ally. While Voyager’s critical buffs are not especially strong, they let him help an ally crit for a little bit of extra damage when needed.

Voyager has low attack and low-to-middling damage buffs. Some of Voyager’s damage increases are debuffs, which is sub-optimal for farming and can be resisted in hard fights. Additionally, unlike many powerful Servants, Voyager’s damage does not increase over the course of multiple turns. Altogether, this leaves Voyager’s damage relatively unimpressive as AoE Servants go.

Voyager has unimpressive NP gain on his Arts cards and very low NP gain on his Quicks. Furthermore, his damage buffs that apply to normal attacks are quite low. As such, he is strongly dependent on his NP for both damage and NP gain, as well as his NP charge skill, which may not always be available.

Voyager of the Stars is Voyager’s NP charge skill, and the NP charge effect scales with levels, so it should be leveled first. Swing-by increases Voyager’s damage, so it should be leveled second. Protection of World's End (Space) is a nice skill, but its effects are fairly marginal even at max level, so it can be leveled last. Voyager wants his first two skills maxed as quickly as possible in order to be maximally effective, but he can safely leave his third skill at lower levels and do fine.

In 1977, the unmanned probe Voyager was launched into the stars from an air base in Florida. The probe recorded many observations about the planets of the solar system, including Jupiter and Saturn, then continued its endless interstellar mission. Even now, he continues to journey through the starry sea outside the heliosphere.

Voyager is considered a young Servant for two reasons: he originates from a very recent period of history, and possesses the physical body of an eight-year-old. He is essentially a piece of exploratory equipment made of aluminum alloy that survived the Holy Grail War and ultimately gained a spiritron body equivalent to a human body in order to communicate better with his Master. In consequence of this miracle, he lacks common sense, has a limited vocabulary, and his body is far from sturdy. His appearance is greatly influenced by the preference of Utsumi Erice, a Master with whom he has a close connection.

Nevertheless, through multiple Ascensions at Chaldea, he is sure to grow into a formidable being fit to be a guardian of humanity.

As befits a space probe, he is very curious, always seeking out new things and experiences. New smells and tastes excite him, and he is a sucker for delectable dishes and unique desserts. Even when he is exploring the unknown, he can use his keen sense of direction and spatial awareness to keep from ever getting lost. He also has a great sense of hearing, and can remember anything he hears. Even though he has limited vocabulary, he is versed in various languages. He also enjoys listening to music of all kinds, and he can't help but feel drawn to live performances.

Voyager of the Stars: A
A limited version of the skill Pioneer of the Stars, this is a representation of voyages that span the stars, where any seemingly impossible journeys are made possible.

Swing-by: A
A specialized combat maneuver. The target's kinetic energy is either taken away or imparted to change their speed beyond the usual limits.

Protection of World's End (Space): B
A skill normally applied to the sacred lance. Voyager has this skill because he possesses an anchor of the stars that is the embodiment of the end of the world.

O, Distant Blue Planet.
A faint, tiny light Voyager barely saw when he turned around to look after travelling six billion kilometers. The thoughts of the people who sent him out into the unknown...all of their hopes and dreams for the future live in that tiny 0.12 pixel photo. And as he continues on his journey, the warm wind blows his golden sails.

The Absolute State of NA
reddit r/grandorder - Giving some context on recent NA…
Does Mana Loading makes Super Kscope redundant for SSR servants?
I mean, for SSR servants, just the first copy + bond lvl 6 is enough to unlock Mana…
Is it possible for a new account to get a free SSR to bond 5 in 2 weeks?
So a friend of mine wants to get into FGO and I told him it’s a good time due to the…
Odysseus Value
How good is Odysseus? I keep seeing different rankings for him. 13 posts -…
Who missed me? (Alternate title: Tales of a Wandering Master)
Hello my peeps! It seems like I’ve gotten back into the game after taking a break from…
Read More