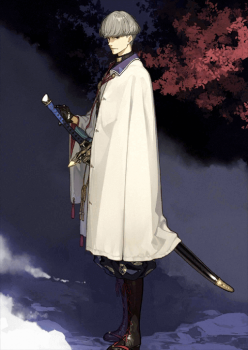 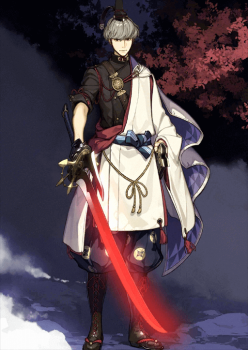 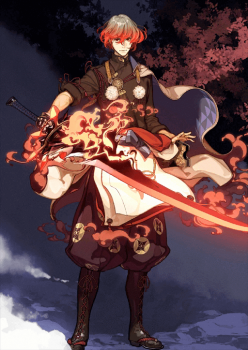 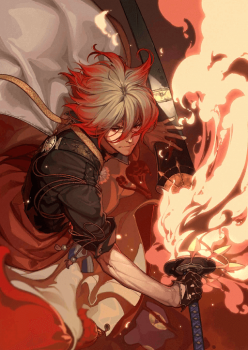 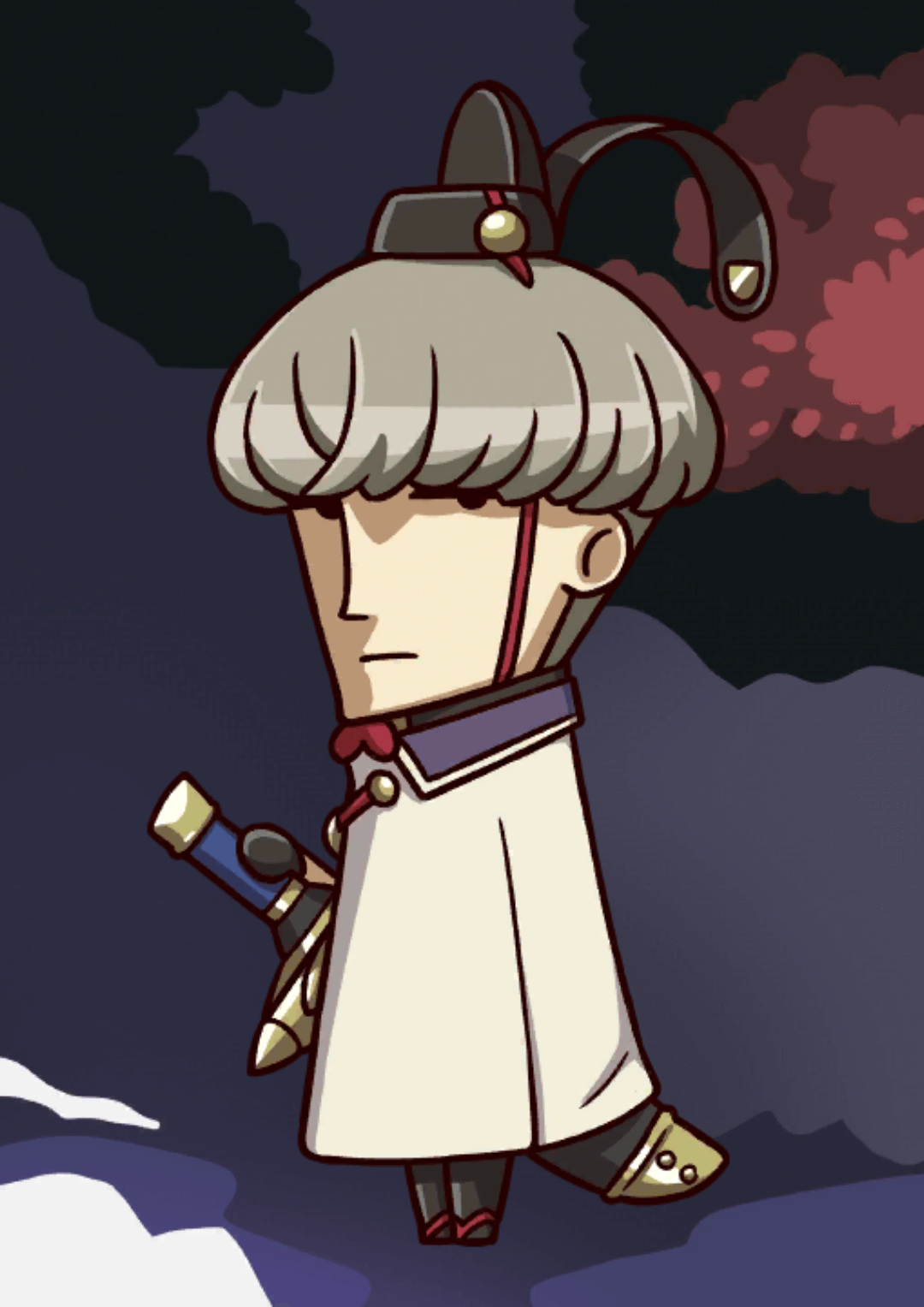 Self Star Gather Rate Up (Arts)

Increase own Buster Card effectiveness (3 turns).
Apply Sure Hit to self (3 turns).
Decrease Critical Rate for all enemies (3 turns).

Tale of the Beginning and the End

“If you’re in need of someone to slay demons and oni, then you’re looking at the right person. I’m not very good at cutting down people though, so forgive me on that front.”

Watanabe no Tsuna’s skill set is relatively straightforward in its focus on his own offensive performance. Eternal Arms Mastery (Anti-Demonic) increases his Buster Star Gather Rate as well as his Critical Strength, Severed Arm at Ichijou Modori-bashi enhances his Buster performance, and Suiten's Disciple provides an Arts Star Gather Rate buff. These in combination give him very solid Crit performance within his own kit, provided he has a source of Stars to work with. He also has a 3-turn Sure Hit effect on his third skill, which can periodically come in handy for enemies that utilize Evasion. Defensively, he has a 1-turn Evade, as well as a minor debuff to enemy Critical Rate. He also has a 1-turn NP Gain buff that comes with the Arts Star Gather buff, greatly enhancing any NP Gain from Arts Crits for a single turn. If he manages to Crit with both of his Arts Cards, he can nearly fill his NP Gauge from 0% even without any external Arts or NP Gain buffs.

His single target Buster Noble Phantasm, Ooeiyama Bodaikisatsu, encapsulates his legend as an Oni-slaying Samurai, dealing both supereffective damage against Oni trait enemies, and special attack damage against Demonic trait enemies. In most cases, enemies that this is applicable to will have both traits, making these trait-based bonuses stack multiplicatively to further enhance his damage. The special attack multiplier is unfortunately relatively low in comparison to the supereffective multiplier, however, and ends up being a tad bit of extra damage in practice. His Buster Card typing on his NP also means he will not be generating any NP refund on his own without additional Card hits or support, and his lack of an NP charge skill makes his NP gain very dependent on Card luck and support from allies.

Overall, Watanabe no Tsuna is a relatively straight forward, offense-focused single target Buster damage dealer. For Masters in need of a single target Saber, he satisfies the role adequately, and although there are a good number of other ST Buster Sabers around, he’s particularly helpful for dispatching Lancer-Class enemies of the oni or demonic variety.

Using his first and third skills provide his Buster Cards with buffs for Star Gather Rate, Critical Damage, and their raw damage as well. With a few Stars on the field, if his Buster Cards are available, he can quickly convert those stars into a painful flurry of slashes for the enemy.

Watanabe no Tsuna’s multipliers against Oni and Demonic enemies compounds to approximately 2.4x damage at 100% overcharge, which makes it among one of the higher multipliers (compared to other ST Buster Sabers with anti-Demonic damage such as Rama, who sits at 1.5x at 100% Overcharge), making him a particularly good option for Lancer or Berserker bosses who have both traits.

Having no NP charge of his own, and wielding a Buster NP, Watanabe no Tsuna relies on drawing his own Arts Cards and utilizing his second skill to land Arts Crits to fill his NP Gauge, which can be unreliable. Otherwise, he is dependent on having NP Gauge supports and/or Craft Essences to ensure he can unleash his NP in a timely manner.

Despite having a slew of strong Critical performance-enhancing skills, Watanabe no Tsuna does not have a reliable way to gain stars on his own. He only has a single Quick Card in his deck, and no Star generation skills or effects, so he will need support or a CE that can produce Stars to fuel his Critical performance capabilities.

Watanabe no Tsuna’s primary focus is damage, and his third skill improves both his NP and Card performance so it is generally first priority for leveling. His first skill supports his Critical performance capacity, making it also helpful to level, although not as widely applicable as his third skill. Finally, his second skill functions as both a defensive skill as well as a 1-turn Arts Star Gather / NP Gain buff. Leveling this for reduced cooldown and better NP Gauge return for his Arts crits is helpful, but not necessary to his primary role.

Watanabe no Tsuna, being a ST Buster Saber with no innate NP Charge, benefits greatly from Starting NP Gauge. Additionally, since he only has Buster buffs in his kit, he also benefits more greatly from Attack or NP Damage buffs, although Buster Performance is still welcome.

Watanabe-no-Tsuna was a warrior from the mid-Heian period. He served along with Sakata Kintoki, Usui Sadamitsu, and Urabe-no-Suetake as one of Minamoto-no-Raikou's famed Four Kings. Of the Four Kings, Tsuna was said to be Raikou's most trusted warrior, and was loved like an older brother by his three companions.

Height/Weight: 180cm, 77kg
Origin: History
Region: Japan
Alignment: Neutral-Good
Gender: Male
Japan's greatest oni slayer. He is so strong that the mere sight of him sends oni fleeing in terror, even without the presence of an exorcist.

A stodgy, extremely straitlaced man. He may be a man of few words, but he is still social, and was a renowned as a cool and collected oni killer. He executes his job with such flawlessness and dogged dedication that outsiders can hardly imagine him ever having a personal or social life. It was said that people around him placed absolute trust in him not because of his words, but rather his attitude and the way he carried himself. His sense of obligation, rather than hatred, is what drives him to kill oni.
...Except for a certain oni, that is.

Eternal Arms Mastery (Anti-Demonic): A-
As long as his opponent is demonic, his arts will never so much as waver. He is an expert at fighting oni and demons, but...this skill has been slightly downgraded for some...specific reasons.

Suiten's Disciple: B
There is a theory that Tsuna, as the ancestor of the Watanabe clan, practiced the art of pacifying water spirits and preventing water-related disasters. He is able to both protect himself against threats from water, and pacify its spirits at the same time.

Severed Arm at Ichijou Modori-bashi: EX
The legend of what happened at Ichijou Modori-bashi at the capital, sublimated into a skill. Tsuna demonstrated incredible prowess by facing an oni, whose supernatural strength should have made it more than a match for a human. According to legend, he sliced off the oni's arm without so much as flinching. This skill makes his attack impossible to anticipate, and so equally impossible to evade.

As a side note, the story of Ibaraki-Douji's arm getting cut off differs between true history and the Imperial Holy Grail War (Singularity). In true history, Tsuna did devise a plan and sliced off Ibaraki's arm, as Ibaraki claimed.

Ooeyama - Bodaikisatsu
A single strike that specializes in killing demons, particularly oni. Watanabe-no-Tsuna was by no means a mage, but whenever he is in the presence of oni, he performs a kuji-kiri chant to heighten his power and focus, enabling him to kill oni in one strike. Unlike Raikou or Kintoki, he fights oni while being entirely human.

Oni-Slaying Yatsuna.
A famed sword of the Genji clan, entrusted to Tsuna by Raikou. Its previous name was Higekiri, and it was also said to be used during the battle against Suzuka Gozen. After it sliced off Ibaraki-Douji's arm, it was renamed Onikiri. The sword possesses special properties when used against demonic enemies and oni. When an oni sees the sword being unsheathed, they are immediately buffeted by a rank B force. Unless they possess Mental Corruption, Madness Enhancement, or a Mental Resistance skill of rank B or higher, they cannot escape its immense pressure.

In FGO, this is only used as a normal weapon.

To Tsuna, an oni is should neither be hated nor protected, but must simply be killed. There is no sympathy, compassion, hatred, or joy in the act. It is a job. Each morning, he went to the capital and killed any oni he encountered, then returned home. This was his routine, each and every day. Were he born in modern times, he might have been a businessman who acted always with perfect dedication to his job (with no need to ever put in overtime). He was an exceptional man who never neglected his training and worked always to improve his skills, no matter what.

Though he understands human behavior, he has no desire to partake in it. He understands human emotion, but it is unclear whether those emotions do indeed exist within him. This is, however, complicated by the fact that he isn't entirely lacking in emotion. He may risk his life in defense of his friends or innocent people, but never grows emotional in the doing...almost like a robot programmed to help people. His explanation for this is that he does what he does simply because it is what's expected of him. Tsuna also does not think of himself as human, which is why it is so much harder for him to kill humans than oni. When he expressed this to Kintoki and some others, they were at a loss for how to respond.

An outcast since childhood, he understands that the only links he has to humanity are that he is one of Raikou's Four Kings, is a warrior, and that he slays oni. The only exception to this is the golden-haired oni who is resplendent yet cruel. She is the only one who stirs up any kind of emotion in Tsuna.