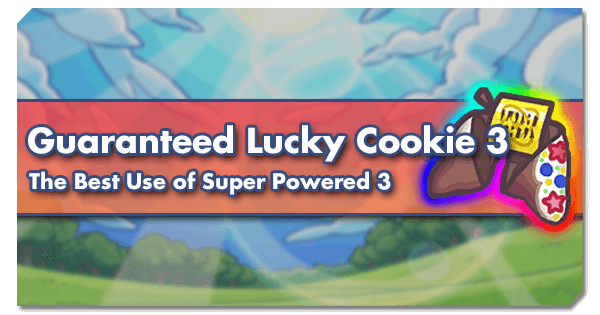 Legendary Gauntlet #3 is over, and it gave us some Guaranteed Lucky Cookie 3 among its other rewards. This one is a bit interesting, as it’s the first of the Guaranteed Lucky Cookies to give a purely offensive Lucky Skill in the form of Super Powered 3. So what does this one do? It gives a very respectable 30% to Super Effective attacks, and unlike the thoroughly ignored Superduper Effective 1, this skill also has the advantage of effecting Sync Moves alongside normal moves while being a stronger multiplier in itself with its 30% boost.

Right off the bat, this looks like a great skill. It has higher potential damage output than Critical Strike 2, so if you have a Sync Pair that you strictly use for their on-type performance and/or a Sync Pair that can effectively attack with multiple types then this is a natural choice, right? Well, yes and no. While it’s true that this is a Lucky Skill that can boost the maximum damage potential of many Sync Pairs to new levels, it also has a number of downsides that really need to be addressed. The first issue is the fact that many of Pokemon Masters’ stages feature sets of opponents that may not all share the same weakness, and this issue is especially true for Legendary Arena bosses that change their weakness mid-battle, meaning this skill will be ultimately useless for solid portions of many battles. The second issue stems from the limitations that are inferred by the skill itself: “Powers up the user’s moves and sync moves that are Super Effective”.

One of the most natural ways that many will think to go with this skill would be a Dynamax Sync Pair like Sygna Suit Giovanni & Nidoking for their ability to hit effectively from multiple types. However, Max Moves are not boosted by Super Powered 3, but they are boosted by Critical Strike 2! And while it’s still useful for moves and Sync Moves on these pairs, keep in mind that the type of a unit’s Sync Move is set in stone (with only a few exceptions), meaning this skill will be entirely wasted if you want to Sync with your off-type attacker that has on-type coverage. Compare this to the ever-popular Critical Strike 2, and it becomes pretty obvious why this Lucky Skill isn’t as hyped by the community as it may seem like it should be.

And just to add the icing on this cake, the damage difference between Critical Strike 2 and Super Powered 3 is only 10%. That small of a margin will very rarely make the difference between success and failure on a stage, but the outright loss of a boost when Super Powered 3 becomes useless on a stage might make a tangible difference. New Year Volkner & Electivire is a great example of this as they already get so much synergies with on-type effects that it becomes totally overkill to use Super Powered 3 when using them against Electric-weak stages, while the 20% boost from Critical Strike 2 comes in handy when playing off-type. Of course it doesn't mean that this option should be totally disregarded for them - if you strictly use them for on-typer performance, then it will always be the best Lucky Skill to use - all-in-all it really depends on the usage you make of your Sync Pairs.

So is it a bad skill at then end of the day? Absolutely not. As stated, it can definitely have benefits on many Sync Pairs as it can maximize damage output in various situations. However, know the advantages and disadvantages before making this commitment. In particular, newer players that don’t yet have a huge pool of damage-dealers to draw from might be best just holding onto those cookies for the time being, as adding this skill to an attacker sort of pigeon-holes them when compared to the nearly universally useful Critical Strike 2.

This is basically the undisputed top userd of Super Powered 3. With the ability to change types mid-battle and existing bonuses for Super Effective damage, this can really help out everyone’s favorite Team Skull enforcer’s damage output. The main down-side would be Legendary Arenas that change their weakness mid-battle, but you’ll need a plan to deal with them regardless, so it’s honestly not much of a liability in practice.

“What?” I hear you say. “This is a low-damage, Normal Type, Dynamax Sync Pair. Normal damage can’t be Super Effective and you JUST said that Super Powered 3 doesn’t work with Max Moves!”. And you would be right on that front, so let me just say do not, under any circumstances, give Super Powered 3 to Red & Snorlax! It’s just plainly a bad idea! So why are they on this list? Because they can offer the coveted Super Effective Up Next effect to team-mates, making them a perfect partner to many of the different Sync Pairs that you may make this commitment with. Again: do not give Red & Snorlax Super Powered 3, but do seriously consider pairing them with whatever you do give it to.

Yes, this is a Dynamax unit, and yes, I just said that Max Moves don’t interact with Super Powered 3, but hear me out. We have a distinct lack of Poison Type attackers, and Allister & Gengar have access to Superduper Effecive and Super Effective Up next via their grid. And aside from that, the best use of their Sync Move is usually for effects on G-Max Terror instead of damage with Max Ooze as G-Max Terror’s Restrained effect offers a very nice 30% damage bonus on all of Alister & Gengar’s attacks, so this is a Lucky Skill that doesn’t see much of a loss in performance in general. And it suffers even less when running on-type Ghost damage instead!

To start with, Super Powered 3 becomes more useful the more Attackers that you may have of a type. Let’s say that you have 3 or 4 reliable damage dealers in a given type. In the end, you’ll probably only use 1-2 of them in most scenarios. At that point, Super Powered 3 is a fine choice for your second-string choices, as they’ll probably only see use in on-type stages where your main picks have already been exhausted, like in the Gauntlet. This won’t always be the case, but it’s definitely worth consideration.

A bit of an overlooked Sync Pair, Player & Solgaleo have access to Superduper Effective 2 on their grid and can effectively attack with both Steel and Fighting Type attacks, making them a solid choice for even more Super Effective boosts to patch up their damage. So why isn’t this Sync pair in the section above? Well, it’s because of the fact that Sunsteel Strike has the coveted advantage of ignoring enemy passive abilities when used, which can make this a valuable Sync Pair for the Legendary Gauntlet despite having middling damage output, so it might be worth sticking with Critical Strike 2 for its added flexibility.

Marnie & Morepeko have long been known for their effectiveness and adaptability. They can drop high Sync Move damage, and surprisingly severe Power Trips if setup right. They also have access to the coveted Super Effective Up Next effect, meaning they have solid synergy with Super Powered 3 when this huge boost comes into play. However, this is also a Sync pair with stellar neutral performance, so we also have a strong argument for sticking with the classic Critical Strike 2.

Slow as molasses but able to punch like a truck, Hala & Crabominable have access to Super Effective Up Next via their grid and can hit very hard with the semi-rare and pretty useful Ice Type, making them a fine choice for Super Powered 3. However, they really like to work under Hail, so they have some strong competition in Weathered Warrior 3, which can have fewer drawbacks given the right team composition.

Worth noting is that the same comment pretty much applies to Sync Pairs like Maxie & Groudon (who also comes with some Type-coverage) and other units with Super Effective synergies that are generally strong enough to play in several team compositions under various circumstances and/or already benefit reliably from other offensive Lucky Skills.

Gardenia & Roserade is a Striker with access to Superduper Effective and Double Down effects, which makes them stronger as an on-type attacker. And since most players consider them a second-string pick that is almost strictly used for on-type stages, the opportunity cost here is fairly low all things considered.

The same goes for units that recently got their Sync Grid expanded like Siebold & Clawitzer and Bruno & Machamp. It seems like it’s an recurring trend for 3-4 stars Sync Grids to come with some Super Effective synergies, while those being generally lower Tier units lead players to use them mostly for on-type stages, so it's always a good consideration to improve their performance.

Overall, this is a solid Lucky Skill for a lot of different damage dealers. But as we’ve already highlighted extensively, it comes with some very tangible drawbacks that should definitely be considered. Just about every attacker can use it, but most probably shouldn’t use it over Critical Strike 2. Regardless, it’s nice to have this option available, so have fun using it for your favorite on-type clears!

Guaranteed Lucky Cookie 2: The Best Use of Status Immunity