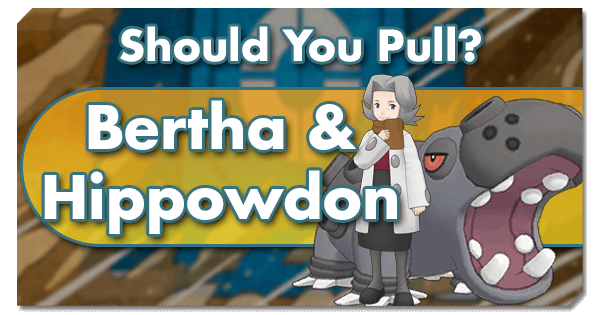 A sand setter that can tank, buff defenses and crit, nuke, and do a lot of chip damage.

Bertha is a character who has long been asked by the community, and has continued to be requested even after her initial hype died down: at the time, Acerola & Palossand was the main sand setter and Cynthia & Garchomp were among the very best strikers, but Acerola’s lack of utility outside of flinch and Sandstorm made people think she was dragging Cynthia down. More time has passed and not only have we gotten better Sandstorm setters, but Cynthia herself is just considered mediocre now, making people kinda forget about her. So, with Hippowdon now on Pasio, what does she do to have people look at her again?

First, Bertha’s stats are for sure not too shabby for a Tech unit: 681 HP with 202 defenses means she can surely take some hits, while 351 Attack is surely usable for Sync Nukes - her Speed, however, does leave some room for improvement. For moves, she has Sand Tomb, a weak 2 gauge move that inflicts Trap on the opponent with a less-than-ideal 85% accuracy. Sandstorm summons the usual field effect that tends to give benefits Ground-, Rock, and Steel-types in this game via passives and does some more residual damage to combine with Sand Tomb. Her Trainer Move, Quite Something!, raises both of her defenses and the critical-hit rate for all allies if a sandstorm is active, it’ll also give an extra AoE boost to both defenses, which should be easy considering her kit. Finally, Hippowdon has the long-waited Stealth Rock, probably the most well known move for any competitive player from the main series. Unfortunately, it might be the single worst move in the game here. Stealth Rock costs 2 gauges and has 2 MP, summoning a field effect that does Rock-type damage every time the enemy makes a move - sounds good to pair with her chip damage, right? The problem is that, unless the stage has a specific weakness to it, the passive “Rock DF Resistance 9” is the default, including old stages like Legendary Arenas. This means that almost every time, Stealth Rock’s chip damage will be less than 1% damage per tick, and the field effect has a time limit to it too.

For passives, Bertha has Sand Summoner, which is a mixture of Sand Kicker and Sand Shelter, getting Sand up as she enters the stage. Next, there’s Sand Slinger 9, dropping one Attack stage for the opponent every time Bertha attacks them under sandstorm. Finally, Pokey Trap 5 further improves her chip damage.

All in all, Bertha takes a more defensive approach than usual for sand setters, doing more damage over time rather than trying to output as much as possible in the shortest amount of time while also giving defensive buffs. These can be a bit contradictory, as field effects tend to tip over hyper offenses, but Bertha can still provide her other qualities even for non-sandstorm teams.

Here, Bertha has two main ways to be used: as a sand unit and as a stall unit. As a sandstorm unit, Bertha will mainly try to hasten their setup with crit buffs while tanking and sync nuking. As a stall unit, Bertha will still provide her defensive qualities, which are more notable here. Her Attack debuffs also become stronger in that aspect, while her trap with Pokey Trap 5 and Sandstorm damage will do the job of weakening the enemy over time.

Against legendaries, Bertha is notable for keeping sandstorm up for a long time while making the entire team survive longer. Physically based Arenas, such as Cobalion, become a lot easier to tank, and the infliction of trap and a weather summon can also help with other gimmicks, like against Uxie and Moltres. Her strong Sync Nuke also tends to be good here.

Bertha can be used off-region for her sandstorm and defensive buffs to support units like Raihan, Emmet, and Cynthia, although she won’t be able to tank when she isn’t boosted by stage bonuses. .

Bertha can summon sand on entry and buff crit with her Sync Grid without the use of MP, but outside of that, her heavy use of gauge and incapacity of making use of her other buffs without spending MP makes her nothing special here

As you can see, Bertha mainly gets her use out of her base kit and ⅗, so both a base pull and a fully unlocked Sync Grid are good points to stop - her ⅖ is a bit too niche to use as a focus point.

EX is a good upgrade for her considering her easy multipliers and high damage on Sync.

Vigilance can be used for the defensive aspect, while Weathered Warrior 3 can be used to boost her Sync damage - Critical Strike 2 can be chosen as a non-Deluxe Cookie option instead. As a more niche option, Speedy Entry 2 can help with her gauge, Head Start 1 can be combined with other sand strikers like Emmet and Raihan, to try to get an early Sync Move, and Adrenaline 1 can be used in case you fear the impossibility of quad queue due to Sand Summoner.

Sand Strikers are an obvious choice here: Raihan & Duraludon, Sygna Suit Giovanni & Nidoking, and Emmet & Archeops are strong pairs that can make use of the field effect that she summons and could appreciate some longevity and crit buffs. Cynthia & Garchomp, while being inferior generally to the other units, really appreciates Bertha because she can activate multiple Theme Skills and provide a Sync Nuke, one of Cynthia’s main flaws.

On a stall team, pairs that can provide healing and can badly poison should be looked at here. Sygna Suit Leaf & Venusaur are the best on this job and have almost perfect synergy with Bertha, with each providing what the other lacks in terms of stalling tools. Wallace & Milotic and Viola & Masquerain can be used to focus more on trap damage instead, with Viola also complementing Bertha’s Attack debuffs with her own Sp. Atk debuffs. Marley & Arcanine can also be used for burn stall with Scorcher instead of poison stall if the stage has a weakness to it.

Unfortunately, Bertha came too late to really shine. While her kit is by no means bad, the competition she has to face is against some of the stars of this game. As a top stall unit, she also has to face the sad reality that stall is not a very popular playstyle, working only on Champion Stadium and not even being the best strategy there. However, her unique defensive qualities and Sync Nuke on top of not being a limited unit can surely give her some points for those who end up pulling her.