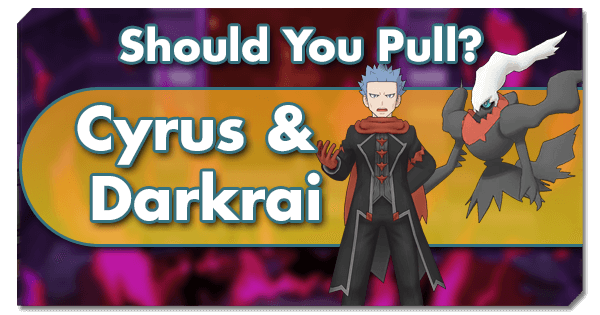 Sinnoh has taken full center stage, and the big-bad of the region is here in a Sygna Suit that basically proves that whoever the heck is making these suits really doesn’t care who they make them for, just so long as the price is right. I mean, come on; Cyrus is well known for trying to basically erase the universe, and now he plans to drop the entire island of Pasio into a sleep that is hinted to be fatal if it goes on long enough. Also; when did Cyrus even order this suit? Realistically, it had to have taken at least a week to have it custom-made, so did he literally just hide out in his lair for a week after he caught Darkrai, awaiting his new suit? And another thing, why does he- ...what? Oh, right. Here’s the review:

Looking at base stats, Cyrus & Darkrai have very high Special Attack, which is very important for their role. They also have good Speed, low bulk, and an Attack stat that genuinely doesn’t matter. Their moveset starts with Dark Pulse, which is one of the main reasons that their Special Attack is so important, as it has a comparatively low base power for a main attacking move. Dark Void is the infamous signature move of Darkrai, which inflicts AoE Sleep on the opposing team at a fairly meager 80% Accuracy. Perpetual Nightmare! Is Cyrus’ Trainer Move. It grants +2 Special Attack, +1 Critical Rate, and +1 Accuracy at 2 base uses. Finally, Dark Wish sets a Dark Zone on the field, which boosts all Dark Type attacks for a limited period.

Moving on, we come to their passive skills. First up is Sync Snooze, which puts the opposing team to sleep when Cyrus & Darkrai use their Sync Move. This is an outstanding skill for a Tech unit in particular, as it allows for a devastating attack on a single unit while debilitating any units that may not be asleep at the time, opening up an easy follow-up with no time wasted. Bad Break 9 drops the opponent team’s Attack, Defense, Special Attack, Special Defense, Speed, Accuracy, or Evasion by 1 stage every time that Darkrai uses Dark Void. It’s nice, but not game-changing. Finally, Shared Nightmare launches what is basically a low-powered Dark Type attack that follows any use of Dark Pulse and affects any sleeping opponent.

Cyrus & Darkrai have a lot going for them. They have AoE Sleep, Dark Zone, and high general damage all wrapped up in one. When the stars align, they have great Dark Type damage that can potentially devastate many stages, but they can also focus on a more supportive role to open up tremendous openings for team mates while keeping high offensive pressure themselves.

On the other hand, Cyrus & Darkrai have a lot on their plate at any given time. In order to maximize their dark powers, they need to buff up, set Dark Zone, and put their target to sleep. And when you consider the fact that ⅔ of those setup options are temporary and one of them can only be performed by Cyrus & Darkrai currently, it’s pretty clear that Cyrus & Darkrai only have short windows in which to hit for maximum power. And these limitations become all the more annoying when you consider the fact that they fall just short of self-maxing their Special Attack and Critical Rate, and will want help lowering enemy stats if you want to go for a Sync Nuke build. Yes, Cyrus & Darkrai are powerful, but if you strip away too many of the layers that support that power, their damage is pretty lackluster overall. That said, they are also a bit of a swiss-army-knife of a Sync Pair, able to use at least one of their skills to come in and wreak havoc on just about any battle.

As we’ve long seen with Serena & Delphox, AoE sleep is massively useful. Add to this their general offensive presence, and you’ve got a Sync Pair that can wreck stages or simply set the stage for another attacker to do the job.

While The AoE portion of Dark Void is lost on most Legendary Arena stages, Sleep in general can still be a win-condition.

The gimmick of the stage kind of determines the viability of Cyrus & Darkrai, though Sleep is a fairly viable tactic in general, as is zone-boosted raw damage. And while Sinnoh isn’t anywhere near the rarest regional theme skill, it still can be handy to have a few more Sinnoh-based attackers for stages with region-based boosts, as the majority of them are limited.

A great offensive pairing with Sycamore & Xerneas for additional power, solid offensive presence in general, and easy Sleep tactics make Cyrus & Darkrai great for the Villa. The limited MP of Dark Wish hurts their performance, but they can still get along just fine without it.

These are generally the most important tiles on Cyrus & Darkrai’s grid:

Critical Strike 2 is the gold-standard for its damage buff to Dark Pulse and Sync Moves alike. Troublemaker 1 is also a solid choice if your goal is to use Cyrus & Darkrai for Sleep support, though their grid can really make it superfluous. From the Deluxe set, Super Powered 3 is also a choice for maximum damage output, though it’s strictly useful on Dark-weak stages.

When using Cyrus & Darkrai for their sheer damage output, you’re going to want a Support unit that can help them finish up their incomplete buffs, or better yet take care of the job themselves so that Darkrai can get down to business as quickly as possible. For this job, Sabrina & Alakazam, Elesa & Rotom, and Jasmine & Celesteela are three of the stand-outs, though they’re far from the only choices. Sync Nuke builds will appreciate help with Stat drops, in particular Special Defense, so a few of the top picks here include Dawn & Alcremie, Champion Iris & Hydreigon, Leaf & Venusaur, and Ghetsis & Kyurem. Another odd yet viable option is Serena & Delphox for their ability to handle the Sleep tactics, opening up Cyrus & Darkrai to focus on Dark Wish and sheer damage.

Despite the high requirements to keep their damage up, Cyrus & Darkrai are able to do so for the most part. They also have the ability to take a back-seat and work on debilitating the opposing team while simultaneously boosting the team’s Dark Type damage, so they really can carve out their own utility in many stages. However, they are pretty unwieldy when going for maximum damage, have direct competition for Sleep in the long-available Serena & Delphox, and don’t have many great Sync Pairs that they can buff with Dark Zone, so they are definitely a mixed-bag.

Right now, Cyrus & Darkrai have some pretty steep competition from Sync Pairs like Lucas & Dialga or Marnie & Mawile, not to mention the upcoming 2.5 year Sync Pairs. Add to this the fact that many recent Pokefair pairs have seen returns not long after their initial release, and it might be a good idea to wait for the moment. Still, anyone who does pull is likely to see very real utility in Cyrus & Darkrai, as this swiss army knife of a Sync Pair is ready to join the fray in many different capacities, meeting their gem cost with very high potential value.