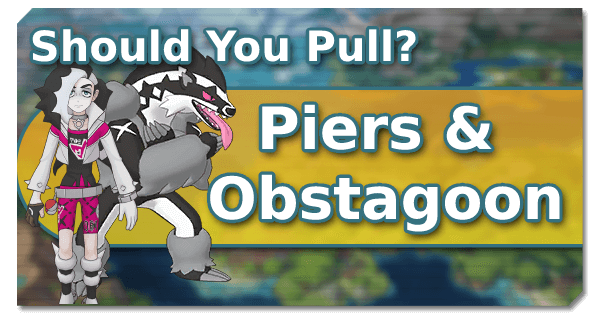 A useful support unit with valuable buffs and potentially outstanding staying power if played right, but nothing earth-shattering or must-have.

- Relies a bit on prediction to do its job, which can leave it a sitting duck if those predictions fail

- Relies very heavily on a skill with limited uses to be truly effective, necessitating MP Refresh luck for continued viability

IT’S THE SYNC PAIR THAT YOU’VE BEEN WAITING FOR; THE ORIGINAL DARK-TYPE GYM LEADER WHO ROCKS OUT LOUD! THEY DON’T DYNAMAX OR GIVE ENCORES, GIVE IT UP FOR PIERS AND OBSTAGOON!

Piers was a natural choice for Pokemon Masters at this stage of the game. He’s the only Generation 8 gym leader who doesn’t use Dynamax/Gigantamax, so he slots in perfectly. And the way that they implemented him is fairly interesting as well! Piers & Obstagoon have three skills and one attack to draw from, each with a unique way of affecting the battle. First up is the ever-desirable Dire Hit All +, which can max the entire team’s critical rate. Second is Shout My Name!, which is a 2-use skill that charges the move gauges of all sync pairs by 2 (this is a full+6 in single-player) and ensures that Obstagoon can survive one move that would otherwise KO. And, finally, we have the skill that makes up the bulk of what Piers & Obstagoon can do: Obstruct. This move acts in a manner similar to Roxanne & Probopass’ Wide Guard in that it makes Obstagoon take on a defensive posture that will end when Obstagoon is attacked or the user cancels it, with the differences being that it only protects Piers & Obstagoon, and can protect against any attacking move, nullifying the resulting damage and effects. On top of this, if Obstruct guards against a physical move, then the attacker’s defense drops by 2 stages as a result. Going even farther, all three of Piers & Obstagoon’s passive skills chain into this move, resulting in a boost to itsDefense and Special Defense, as well as the whole team’s Attack every time that it’s successful. This means that after one proper prediction, Pierse & Obstagoon can potentially change the pace of battle, and the skill has 2 uses base. This skill, along-side their multi-use KO protection, means that Piers & Obstagoon can tank through some of the most brutal attacks in the game and actually come out stronger for it. They also basically ensure that Piers & Obstagoon can survive at any 4 normal attacks minimum if played properly, no matter how strong they may be.

However, it’s not all songs of victory for Piers & Obstagoon, as they have their drawbacks as well. Their basic bulk is very nice, but they lack any viable recovery, and their primary defensive tool can be  a bit suspect. This is because tanks generally want to boost their defenses early in order to maximize their tanking capabilities, yet at the same time Pierse & Obstagoon tend to want to reserve Obstruct until later in the battle when powerful moves like Hyper Beam or Double Edge are more likely to be used. They also have the issue of the way that Obstruct works as far as the sync move counter goes. On activation, it will count down the sync move counter by 1 just like any other move, but if it’s not activated before the next round of moves then Obstagoon will just sit quietly while doing nothing to help the team reach the next sync move. They also face one other huge flaw defensively in the fact that sync moves ignore both Obstruct and KO protection, driving home their lack of long-term tanking capabilities.

Piers & Obstagoon want the battle to end quickly, so their overall utility across modes can vary greatly. They can be an outstanding support unit for the Champion’s Stadium: Master Mode, where they can go all-out and trash the competition, blocking harsh hits and retaliating with debuffs for the opponent’s team and buffs for the player. However, its performance as a main tank in this regard relies on the battle not dragging on for too long or the availability of team healing options like Potion, so playing them to their strengths is key. The lengthy prospect of Full Force Battles seems a bit less ideal, but it’s here where Piers and Obstagoon’s hidden talent for singing backup instead of rocking as the star of the show starts to come into the spotlight. As a second-string wall, Piers & Obstagoon can spread their ever-valuable Critical Rate buffs up front, and then reserve their walling capabilities for later in the game, when more powerful hits start to be thrown around. When the main wall drops, Piers & Obstagoon can step up just as long as they have enough HP by this point in the game. Their performance in the Legendary Arena is mixed, as these tend to be battles of attrition, which Piers & Obstagoon can have difficulty facing. However, they can be used at key points when particularly strong attacks are on their way in order to power through to the end. They can also provide support in the role of a secondary wall as previously mentioned, but the effectiveness of this generally depends on the individual stage. Finally, we have the Battle Villa. Leave Piers & Obstagoon home for this one, as they rely on skill uses for basically everything. They’ll likely be worthless after 1-2 fights.

Outright, the most important nodes on Piers & Obstagoon’s grid are the two Obstruct MP Refresh 2 nodes. Their entire kit and ability to wall out the opponent revolve around this skill, so picking up these nodes is key to victory. Second on the list is Shout My Name! MP Refresh 3, which can potentially let Piers & Obstagoon survive more KO-moves while also providing gauge support at the same time. The third must-have is the tried-and-true Night Slash Move Gauge Refresh 3, which will make it a bit easier for Piers & Obstagoon to keep up with the sync move counter. Note that it is easily possible to pick all of these up with a single grid setup.

With the must-haves out of the way, these are the nodes that can be seen as “nice to have, but not game-changing”:

And finally, the nodes that can probably be ignored outside of some niche uses.

Next up, Lucky Skills. What Lucky Skill do we aim for when using a defensive sync pair? That’s right, good old Vigilance! Due to a lack of viable recovery, having Obstagoon take more damage than necessary is a very, very bad idea. Keep that Critical Hit damage away, and ensure that those Defense/Special Defense buffs from Obstruct aren’t ignored! Honestly, this is the best option in general. Fighting Guard could also be used to mitigate their type weakness, or Stoic 2 to raise defense after attacking, but these options run a gambit of falling to a Critical Hit, and the latter has the issue of Obstagoon’s hesitance to actually attack, as attacking means it’s not using Obstruct.

So what team comps work best with Piers & Obstagoon? As stated earlier in this article, they like partners that can sweep up the opponents fairly quickly. Gloria & Zacian are great for this role, as they appreciate the Critical Rate and Attack bonuses that Piers & Obstagoon can give, and have a fairly strong focus on beating down the opposing team as quickly as possible. Lusamine & Pheromosa are in much the same boat, scoring high damage and enjoying Critical Rate buffs while wanting to end the battle as quickly as possible. Lance & Dragonite are also great here, as they love the Critical Rate buffs and gauge support, and can help keep Piers & Obstagoon healthy with Potion. In the role of a secondary tank, power-house sync pairs like Sygna Suit Blue & Blastoise can provide a plethora of bonuses, including passive recovery and defense and special defense buffs which Piers & Obstagoon absolutely relish. Sygna Suit Leaf & Venusaur can provide extremely valuable healing and drop the opposing team’s Defense and/or Special Defense at the same time, which pairs well with Obstagoon’s offensive-support functions. Skyla & Swanna are also outstanding, especially when facing physical attackers as their boosts to Defense and Speed combined with their status as one of the best Potion users in the game can make Piers & Obstagoon especially hard to deal with.

Let’s be honest here; Piers & Obstagoon are unique and potentially useful, but the 1.5 year celebration is right around the corner with a few genuinely impressive options available. Beyond this, while Piers & Obstagoon have a few valuable traits, none of them are genuinely must-have for most fights. While they’re nice to have, it’s not recommended to spend much at all on this banner.

Should You Pull? Summer Hilda & Grapploct