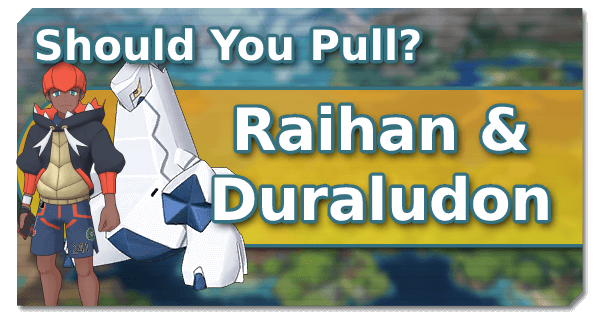 A strong Striker with an impressive immediate presence that can end some battles before they truly begin.

+Access to high immediate power, able to start hitting for high damage early in the game.

+Can allow for team flexibility, potentially opening up useful tactics that many other strikers can’t afford to have available.

-Can struggle to keep using its 4-bar move in longer fights due to low speed.

Raihan & Duraludon come to us with an offensive typing that is already represented by two outstanding syc pairs, but a style that’s a bit more their own. While it’s easy to look at them and say “oh, just another Steel Type striker”, a closer look reveals something a bit deeper than that. To start with, Raihan & Duraludon deal special Steel Type damage, which is currently a trait that’s unique to them. Next is the fact Raihan & Duraludon’s competition share one common thread: they have a bit of “hurry-up-and-wait” built into their strategies. Steven & Metagross need to Mega Evolve to become great, while Gloria & Zacian need to wait for the opposing team to use a Sync Move to hit for maximum damage. Raihan & Duraludon, meanwhile, are very impatient and want to just get to the point! Right off the bat their Ferocious Entry ability makes them hit +4 Attack and Special Attack, so it doesn’t take much to fully buff them. They also don’t need to hit any arbitrary requirement to start hitting hard, so they can just come out swinging with their main attack, Steel Beam. That said, it’s not all sunshine, roses, and beams of steel for Raihan & Duraludon.  They’re not quite as good at battles of attrition as their contemporaries for the most part, lacking many mechanisms to keep themselves going strong long-term. Steel Beam takes a chunk of HP away from Duraludon with every use, and though the net damage taken is greatly lessened thanks to its innate Standfast 9 ability and auto-recovery from the trainer move, “Top This!”, it will eventually take its toll. Yes, this effect can be removed via Raihan & Duraludon’s grid, but not all Sync Grid builds can afford it. You also have to worry about the fact that they are quite slow, which does not bode well with a sync pair that relies heavily on a 4-bar move for damage. Overall, Raihan & Duraludon take their fairly populated niche in an entirely different direction and enable some very interesting tactics as a result.

Raihan & Duraludon have a very solid presence in the Champion’s Stadium overall. This is, again due to their quick-draw play style, which can potentially allow the player to pick more offensive bonuses for the opposing team in order to keep them squishy with the goal of obliterating them before they can pose a major threat. They operate best against Steel Weak stages because of their trainer skill’s Super Effective Damage multiplier, but can still work well when just used for their raw power.

One would think that the Battle Villa would be a mode where Raihan & Duraludon could shine, as they self-buff and have great coverage. And you would be right… if not for their speed issue and self-damage. Yes, they can come in and instantly lay down very, very powerful attacks without needing to do much, but they can’t do so consistently due to just how slow they are without buffs, as well as the recoil of Steel Beam that will slowly drain their HP if you don’t pick up Recoil Removal on their grid.

Full Force Battles tend to be battles of attrition, so Raihan & Duraludon’s whole schtick of shooting first doesn’t help a whole lot unless you’re facing down a first-line opponent that needs to drop quickly due to some threat that it poses. They can operate just fine in this mode, but it doesn’t play to their strengths quite as well.

Leaving a Legendary Arena boss alone early-game can occasionally be an issue, so using Duraludon on your first line can result in a very punishing opener. Granted, Legendary Arenas tend to have specific gimmicks that the player is expected to exploit or watch out for, but at times sheer damage can at least do the start of the job well enough to warrant use.

Using Raihan & Duraludon basically comes down to “click Steel Beam and win”, but a few nodes can definitely be considered key to unlocking their maximum potential.

These are generally the most important nodes on Raihan & Duraludon’s grid:

To sum it up, ⅕ doesn’t offer anything genuinely useful aside from an Accuracy boost on Steel Beam, ⅖ is where Raihan & Duraludon gain a bit of help with their speed issues, and ⅗ is where offensive support options start to shine.

For Lucky Skills, the tried-and-true Critical Strike 2 seems to always be the move of choice for attackers. The damage increase can’t be ignored, and it’s basically unparalleled in its power. Stoic 2 could be somewhat useful for builds that pick up Tough Cookie, and Fast Track 2 can be nice for circumventing the speed issue, but they just don’t work with Raihan & Duraludon’s strategy as well as Critical Strike 2.

So how exactly do we build a team around Raihan & Duraludon and their quest to defeat Leon & Charizard by zerg-rushing the entire game? Well, Sygna Suit Blue & Blastoise complements their niche quite well. +1 Critical Rate and move gauge acceleration in one move is just what the doctor ordered, and +2 to Special Attack is likely to passively happen fairly early in the game. They can also boost team Defense, which can translate into damage if Raihan & Duraludon have Tough Cookie active on their grid. Elio & Primarina are also fairly slow, but they can also fill in Duraludon’s missing pieces with a bit of grid work, while also potentially buffing more stats and putting the opposing team to sleep with Sing. And speaking of putting the opposing team to sleep, Raihan & Duraludan’s self-sufficiency can potentially allow for a greater level of freedom in team composition, so powerful tech units such as Serena & Delphox tend to slot in very well. Finally, the ability to use Steel Beam consistently in more drawn out fights will require some speed support, making sync pairs such as Spring May & Lopunny, Roxanne & Probopass, or Sycamore & Xerneas great partners.

If you need Steel Type damage or can see the value of a quick-draw playstyle, then Raihan & Duraludon could shore up holes on your team perfectly. However, if you already have other Steel Type options, then the added value of a Steel Type that specializes in Special damage might be a bit less attractive. Either way, Raihan & Duraludon will serve those who pull them well, just so long as you’re prepared to play them to their strengths.