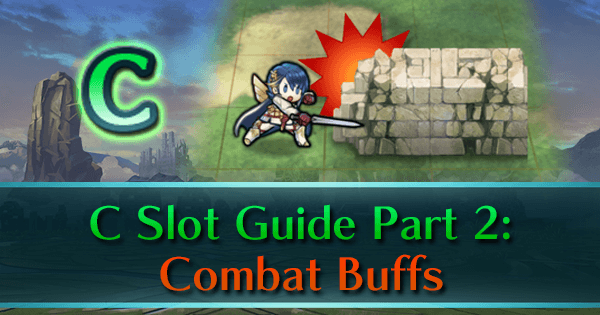 A combat buff is a type of stat bonus that only takes effect during combat and is not directly seen on a unit’s stats. As combat buffs only take effect during combat, they are not affected by Panic or by other similar skills like field buffs are. These can also be stacked, so if two units carrying the same spur are adjacent to the same unit, that unit will enjoy the effect of both of them. However, they do not directly affect the power of Blade tomes.

Spur, Drive, and Guard skills all provide combat buffs. All of them are also very similar to one another.

Who Should Get What?

Practically all that was said in this section on the field buffs page still applies here: Try to have units carry skills which buffs stats that benefit the others while not being as important for themselves and try to focus on maximizing strengths rather than minimizing weaknesses. Also, pretty much every unit will benefit from Attack.

However, the main key difference when talking about this topic for combat buffs is that combat buffs can be stacked with each other. This changes the logic behind choosing what combat buffs to take somewhat different. As mentioned on the field buffs page, having units carry the same type of buff can be done if other stats are needed less in order to ensure the right buffs are more consistently given. This point is even more notable due to the stats stacking. For example, you could give two units Spur Def and place them both alongside a defensive unit, giving them eight bonus Defense. Doing the same thing with Fortify Def instead would still only result in an extra four Defense.

As such, Spur stacking is a very real strategy. A popular example of this is using a full armored team where multiple (if not every) units is using Ward Armor. When grouped together with everyone using Ward Armor, that is a massive boost of 12 Defense and 12 Resistance to every person in the squad, greatly increasing their survivability. As combat buffs cannot be countered in the same way that field buffs can be, this can make armored teams incredibly difficult to fight against.

While Ward Armor stacking is the most common example, practically any team is capable of Spur stacking. Given Spurs and Drives are relatively cheap in general, this can be a simple, effective, and practically uncounterable way to make your team more powerful. If you have absolutely no idea of what C slots to load your team with, Spur Stacking is recommended.

Spur and Drive skills are the most simple C slots you can use. Being simple in effect and easy to utilize, you can very rarely go wrong with using one of these types of skills. Despite the different names, Spurs and Drives can be considered the same category of skills, both utilizing a level 1 Spur as their root skill. This is why both will be discussed in this section.

Spur and Drive skills both provide a combat buff to any units within range of the user. No other requirement, just be within the specified activation range for the skill. The differences between the different types are as followed:

From observing the different types, spotting the advantage each one has is very easy. Single Spurs grant the largest buff to their respective stat, Dual Spurs buff two stats at once, and Drives have the benefit of range. The non-infantry movement types (and dragons) have their own versions of the Drive skills too, known as Goad and Ward. In all cases, Goad and Ward skills are superior to drives, with both buffing two stats by four points to any applicable unit within two spaces of the unit. Of course, these skills have the negative of only affecting a specific movement type, so should typically only be utilized on a team solely consisting of the relevant movement type.

All in all, Spurs and Drives are certainly one type of C slot where it’s almost impossible to go wrong with them. Their effect and benefit are so simple and apparent that having them will rarely be negative. In all honesty, if you can’t decide on a C slot to use, a Spur or Drive is likely your safest bet.

Guard skills are a bit more interesting compared to the typical Spur and Drive. Because technically, the skill itself doesn’t give a combat buff: it gives any affected unit access to another skill that gives a combat buff. For that reason, Guard skills are being counted as giving combat buffs. The Guard C slot skills are also very different in effect to the Guard skill which can occupy the B slot.

Guard skills come in two flavors: Close Guard and Distant Guard. Close Guard effectively grants the Close Def skill to allies within 2 spaces, while Distant Guard effectively grants the Distant Def skill to allies within 2 spaces. Note that these skills don’t give the level 3 versions of these skills, but instead the level 2 versions of them.

So, any unit affected by a Guard skill will receive a four-point boost to Defense and Resistance whenever attacked at close range (with Close Guard) or at a distance (with Distant Guard). While both these skills provide a higher defensive boost than any of the Spurs or Drives would, they are hindered by their requirement to have the one receiving the buff need to be attacked and by them only work either at close range or at a distance.

Overall, while these skills are cool in concept, it is likely you won’t be seeing them on many units except those that they come on, mainly because they’re very rare due to being locked to a few 5 star exclusive units which come with other skills that the majority of people would want to fodder off more. With Drive skills being fairly accessible and not marred by other requirements, it’s hard to recommend using a Guard skill over a Drive or even a Spur skill.