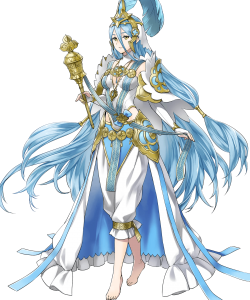 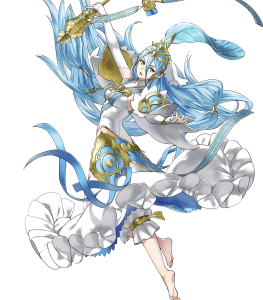 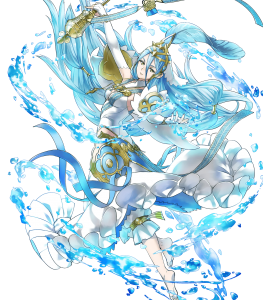 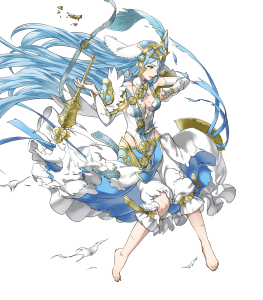 With Version 6.3, Azura received a long-awaited refine for Prayer Wheel, her personal weapon.

While this refine likely does not meet the theorycrafted expectations of most players, the convenience of simply granting +6 Spd to allies within two spaces at the start of the turn should not be understated. Previously, Azura was reliant on her base Atk Tactic (which relies on mixed movement types), Hone/Fortify 4s (which require Azura to be adjacent to allies at the start of the turn), or skills that increase stats upon refreshing (such as Torrent Dance) to grant spectrum buffs to allies. Additionally, Azura’s combat tended to be underwhelming, but with +5 Atk/Spd and conditional Triangle Adept, she can at least hold her own now, especially against red enemies. Something to note, however, is that red enemies now have an easier time baiting AI Azura because she deals more damage to them; if the AI has to choose between attacking an enemy or refreshing an ally, they will choose the former if they can deal at least five damage.

Azura’s infamous personal Assist is back with a vengeance. In addition to its base effects of granting another action to an ally and granting said ally +1 movement if they are an Infantry or Flier unit, Gray Waves II also grants said ally【Null Panic】, neutralizing the Panic status that reverses visible buffs.

Gray Waves II can grant even more flexibility to allies than a normal refresh already would, as +1 movement can help Infantry and Flier allies reach enemies or safe spaces that they otherwise would not be able to reach. +1 movement is particularly helpful with allies that have Canto (Rem. +1) or Canto (Rem.), as the number of spaces they can move after performing certain actions takes into account any additional movement. Although granting【Null Panic】to an ally that has already moved can be redundant since ending a unit’s turn removes Panic from them anyway, it is still helpful if allies are inflicted with Panic during Enemy Phase, such as from Panic Smoke and the Panic Manor structure in Aether Raids.

Access to mobility-enhancing skills such as Aerobatics, Ground Orders, and Guidance is especially helpful for supportive Fliers such as Azura, as these skills allow for movement and flexibility that would otherwise be impossible.

Azura’s 139 BST ties Performing Arts Shigure, Hoshidan Summer Micaiah, and Hoshidan Summer Elincia for the lowest BST in the game. As such, Azura’s combat performance leaves much to be desired, though Prayer Wheel helps with damage output and survivability against red enemies.

For better or worse, Legendary Azura’s reign as the undisputed queen of refreshers has long been over. Nowadays, Azura faces immense competition from Mythic refreshers (Peony, Triandra, Plumeria, and Mirabilis), refreshers with different utility (such as New Year Peony), and refreshers with three movement (such as Masquerade Sigurd and, ironically, Hatari Azura).

Fire Emblem Engage PSA
Just a heads-up to anybody out there playing Engage and changing the internal clock to…
The Norne situation
Hola! While Norne’s weapon refine is better than I expected, it is still a bit…
Building the new Effie (and the importance of 0-follow up?!?)
Its been quite some time since i saw a grail unit im Intrested in but, finnaly after 2…
Help me choose my engage waifu! ♡
Basically title. I’ve got the pact ring but now I’m uncertain who should I give it to…
FEH Update Thread Feb 05 2023
Refines Individual images (click for more details) Condensed all Refines image …
Read More