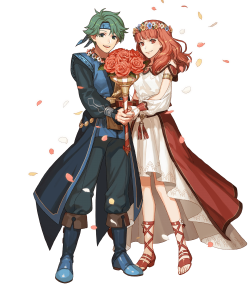 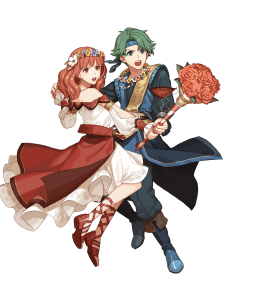 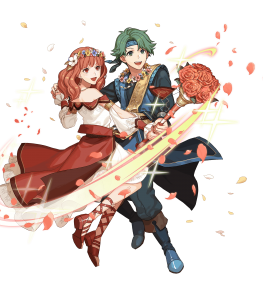 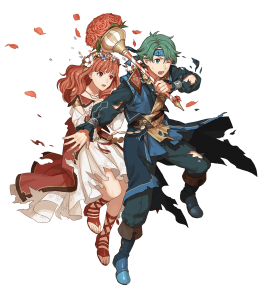 Chasing the Winds on the Plains (Galeforce)

35/40 offenses are among the highest of Infantry Axe units, allowing Alm to consistently deal high amounts of damage and perform follow-up attacks. With the help of Scepter of Love, Duo skills, and the myriad of offensive passive slots available, Alm can become a fantastic offensive sweeper.

40 HP and 32 Defense adds up to a respectable 71 physical bulk. In combination with Scepter of Love and Repel / Close Call, Alm can become a deceptively tanky unit that can survive multiple hits on the frontlines, then perform powerful counterattacks.

Scepter of Love is an outstanding personal weapon, granting +3 Speed and, if Alm’s HP is ≥70% or he has a visible buff active, also grants a bonus to Alm’s Attack equal to 25% of the enemy’s Defense and inflicts a debuff on the enemy’s Attack equal to 25% of their Resistance. With this, Alm can slice through high-Defense enemies while consistently tanking high-Attack enemies.

Previously only on Legendary Alm, Lunar Flash grants bonus damage equal to the sum of 20% of his Speed and 20% of the enemy’s Defense. Lunar Flash also has a measly 2 cooldown, allowing Alm to consistently activate it, especially with skills such as Time’s Pulse, Flashing Blade, and Quickened Pulse.

Being a Duo Hero comes with many advantages without any significant drawbacks. Alm’s Duo skill grants +6 Atk/Spd, heals 30 HP, and neutralizes penalties on himself and all allies within a range of 5 columns and 5 rows centered on himself. This not only grants Alm a unique hybrid between offense and support through buffs, healing, and a Restore effect, but he can also activate his Scepter of Love through the +6 Atk/Spd granted by the Duo skill. Alm’s BST will also be counted as 185 in Coliseum modes, granting Alm nearly unparalleled scoring potential.

As an Infantry unit, Alm benefits froman arsenal of powerful skills to choose from, including Flashing Blade, Bonus Doubler, Wrath, Null Follow-Up, Repel, Close Call, and Time’s Pulse. Unlike every other movement type, Infantry units hardly need to worry about Infantry-effective weapons, which is a great privilege for supertanking. Alm can also take advantage from skills such as Guidance and Ground Orders from her flying allies to increase her mobility.

40 HP and 25 Resistance adds up to a mediocre 64 magical bulk. While this can be patched through Resistance buffs, Repel / Close Call to reduce the damage taken, Attack debuffs on the enemy, Scepter of Love’s effect, and various other ways, Alm may still struggle to handle a barrage of magical attacks, especially from Red nukes such as Celica (ironically) and Tharja.

Restores 30 HP, neutralizes【Penalty】, and grants Atk/Spd+6 to unit and allies within 5 rows and 5 columns centered on unit for 1 turn. 【Penalty】 All effects that last "on foe through its next action." Includes penalties inflicted by a skill like Panic or Threaten and negative status effects (preventing counterattacks, restricting movement, or the effects of a skill like Triangle Adept or Guard).