Community Posts with Keyword Roster Rearming: The best uses of Arcane Grima All
Article by MackerelPye 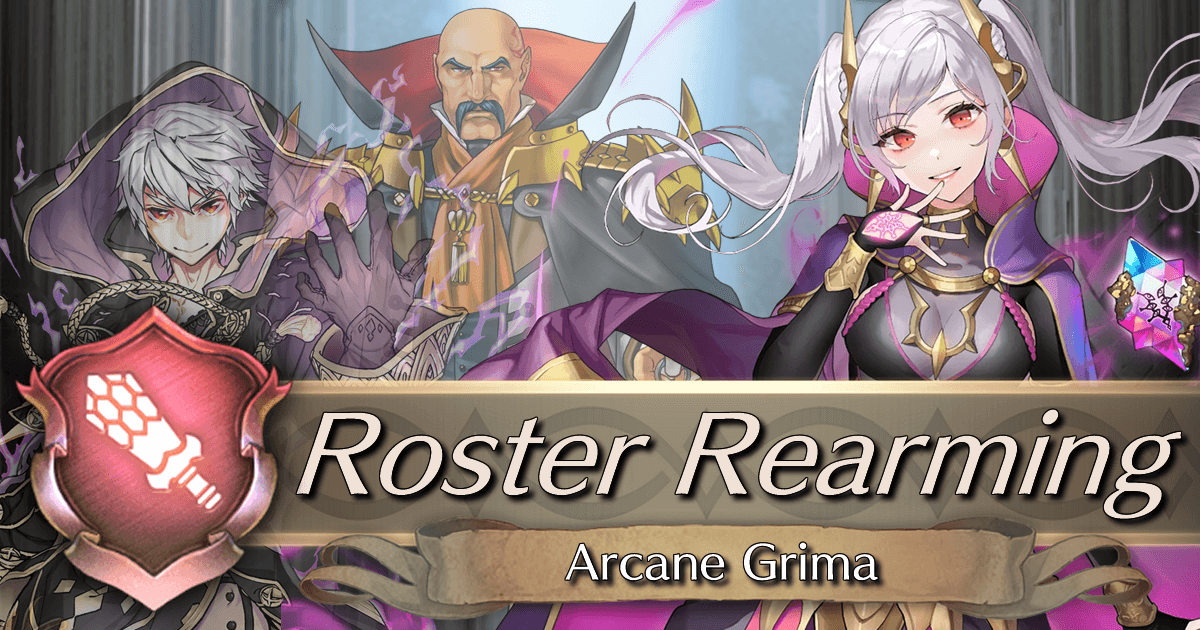 What are Arcane Weapons?

With the introduction of Rearmed Heroes in September 2022, Fire Emblem Heroes finally throws a bone to older, more powercrept units in the form of Arcane Weapons.

Arcane weapons are essentially modern, inheritable prf weapons possessed by Rearmed Heroes. This time around, Rearmed Robin tears Zenith asunder with the too-proudly named Arcane Grima. You can inherit it to other units that use dragonstones without losing the original hero - meaning that even after inheriting Arcane Grima, you can still use Rearmed Robin in combat.

This allows summoners to drastically increase the power level of older units, particularly those with unexceptionally performing refined breaths or lack thereof, such as Halloween Dheginsea, Kana (F), and Nowi.

Arcane weapons can also be stat refined for additional stats after inheritance, allowing your chosen inhertitor to become even stronger and bulkier with +5 HP and another stat of your choosing.

Keep in mind that the units and builds displayed in this article are indicative of an archetype showcase, rather than a full endorsement for that specific unit. Additionally, the best character to give a new weapon to is always your favorite! This article serves to make suggestions based on what might be best in the current metagame

Arcane Grima is a powerful weapon with the following effects:

As with Arcane Éljúðnir before it, Arcane Grima grants a combination of effects that other weapon types would kill to have right now. It's not difficult to see why: CD -1 enables more frequent and usually more effective Specials at higher coooldown, the added follow-up confirms more damage and kills (assuming Null Follow-Up isn't active or an issue at all), and extra damage and healing (a great fallback effect on a weapon whose effects can potentially taken away with low HP) make for a solid dragon all-around. Unlike the sword, Arcane Grima grants spectrum stats also, making it an accommodating, appealing choice for dragon of various statlines.

Several negative considerations are in order, as they are with any weapon:

As a small note and possible annoyance, inheriting Arcane Grima also requires its inheritees to have Flametongue as a prerequisite skill. This is typically no big deal for non-armored dragons as they can simply inherit Flametongue from Robin herself, unless you need other skills inherited onto her (likely as part of an arcane merge "chain"). Specifically, for armored dragons wanting either Hardy Fighter 3 or A/S Near Save 3 in addition, though, you'll have to inherit Flametongue from a list of oddly rare units. To illustrate, Garon is notably the cheapest source but requires Heroic Grails, and other choices may be far too rare or premium for such a mundane purpose.

Above all else, Fire Emblem Heroes is a game of favorites and we simply recommend putting this on an existing high-investment favorite of choice. If you didn't already have someone in your heart of hearts, though, there are subjectives and objectives to consider for applying this Arcane weapon to an overall pool.

Rearmed Robin is simply a fodder wonderland especially for armored dragons who require her base Hardy Fighter, A/S Near Save, and/or, more on-topic for the article, Arcane Grima. Arcane Grima especially fulfills a lot of Save unit checkmarks: its CD -1 combos very well with various Specials for instant triggers, Fighters, and acceleration techniques, and the extra damage and healing benefit all types of builds regardless of the unit's gameplay priority on damage, survivability, or healing.

In particular, the Breath is a divine gift to armored dragons lacking a PRF weapon of their own: this list is fortunately pretty small between Halloween Dheginsea and Winter Fae, both seasonal units who stand to benefit massively from inheriting a great combo meal of both the Breath and their choice of Hardy or Near Save. 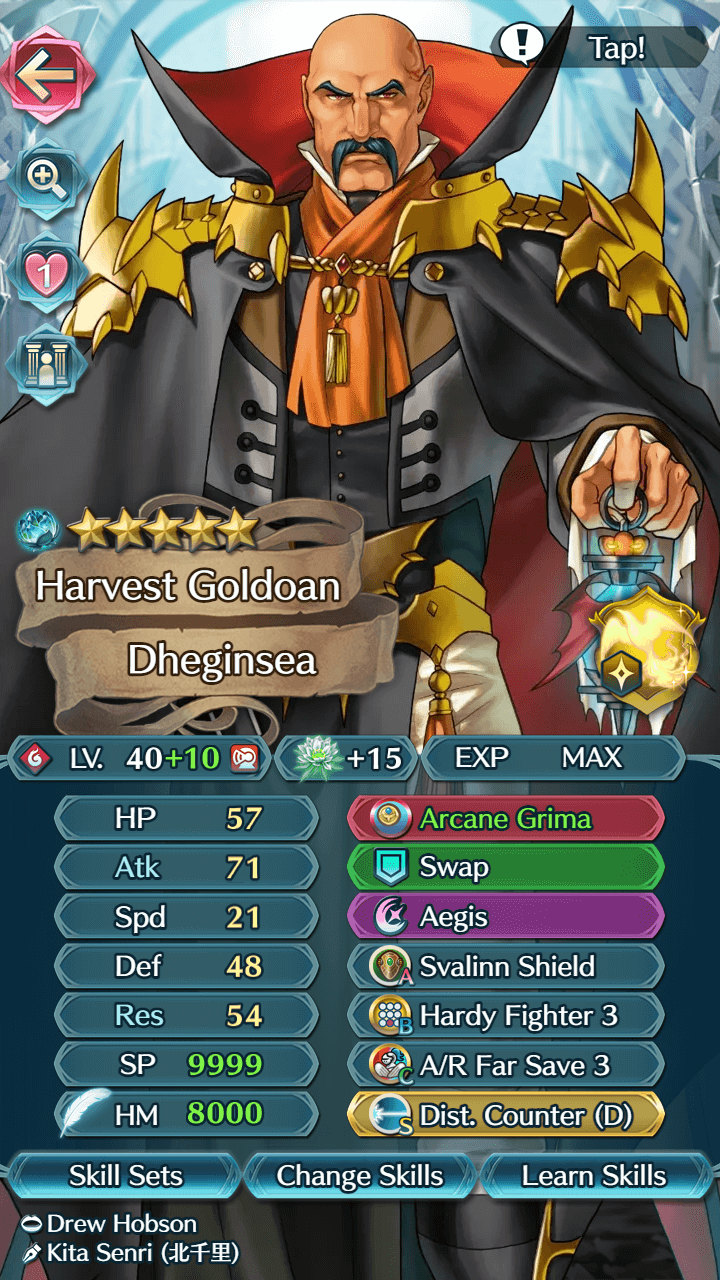 The quintessential Hardy Fighter build on Dheginsea, who to this day has the ideal statline to tank pretty much any attack coming his way except armor-effective weapons -- which is where Svalinn comes in anyway. Arcane Grima makes sure Dheginsea is operating with some form of additional damage and healing. 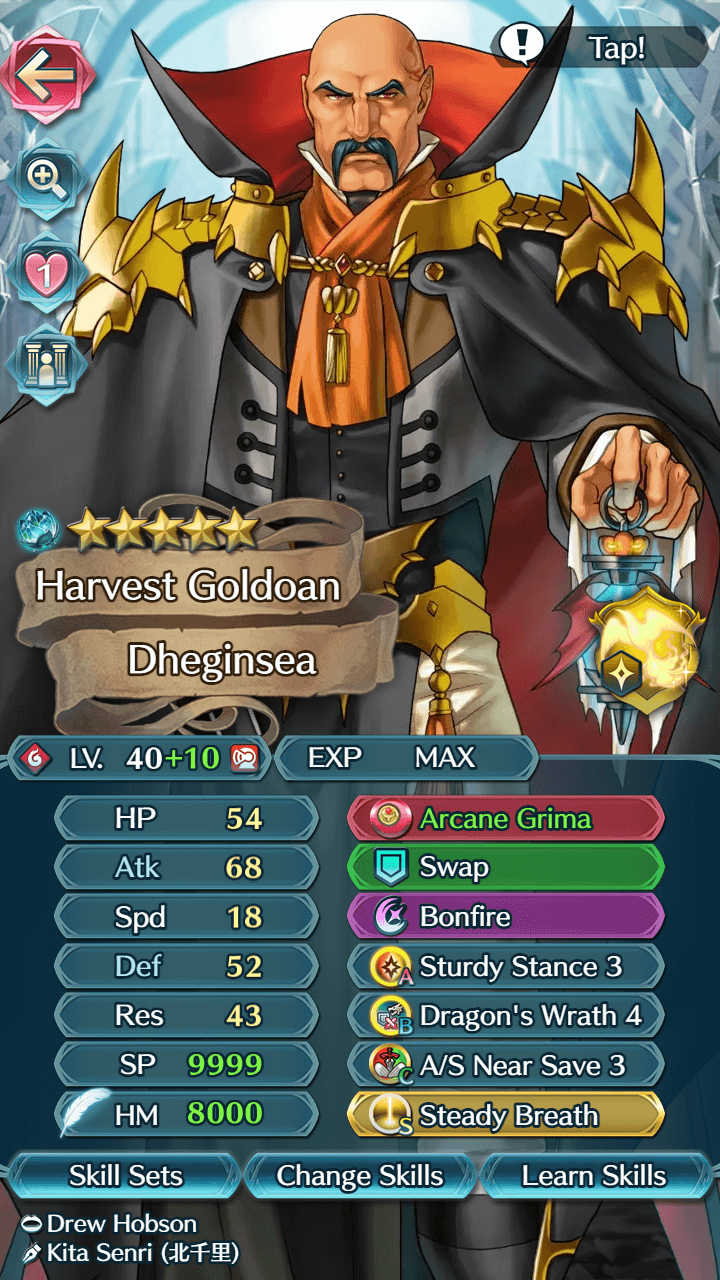 A one-shotter approach to the Dragon king. Bonfire is consistently charged and powered by a golden combination of Steady Breath and the added damage of Dragon's Wrath 4 and Arcane Grima. A/S Near Save seems odd on him, but Robin IS a good source of it and what really matters is having Near Save in the first place. 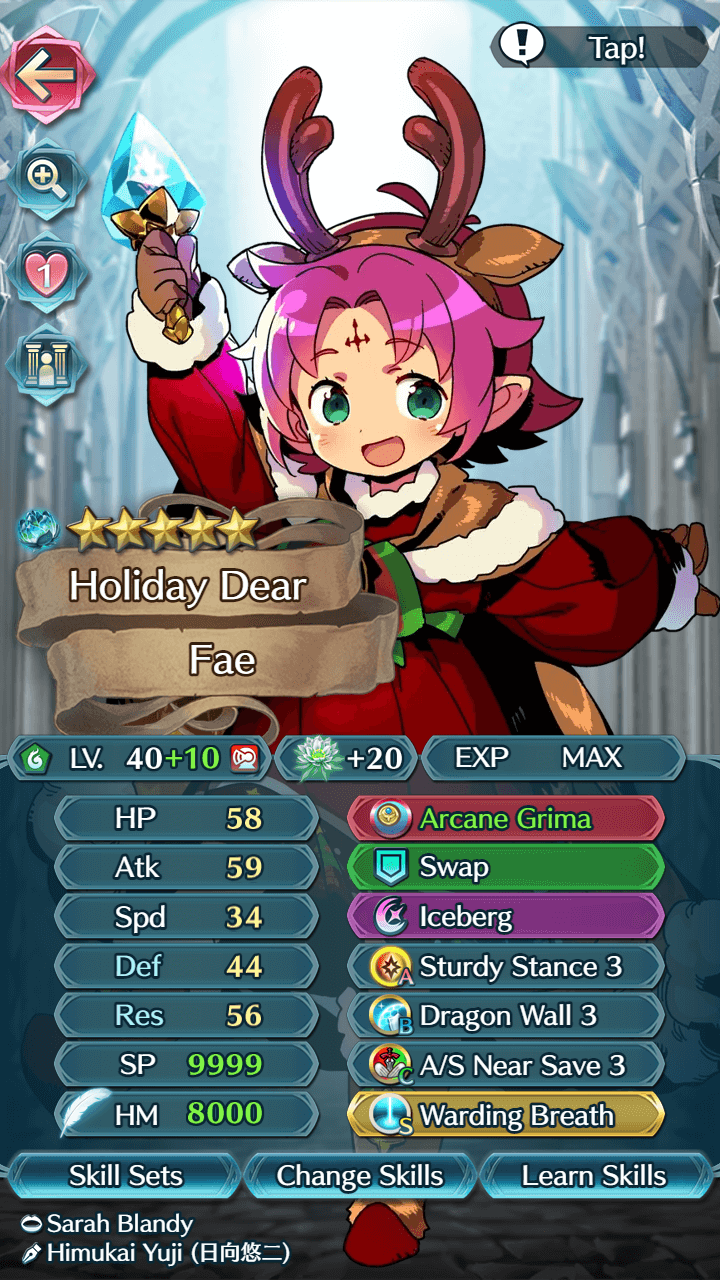 Fae's high Res makes her an ideal candidate for Dragon Wall. She can even grab A/S Near Save from Robin while she's getting Arcane Grima, to boot.

Outside of this, it's actually pretty difficult the outright swap the existing PRF weapons of other armored dragons; many already have great packages of effects unique to them, or are simply due for a refine in the coming months. There may be a few exceptions here: 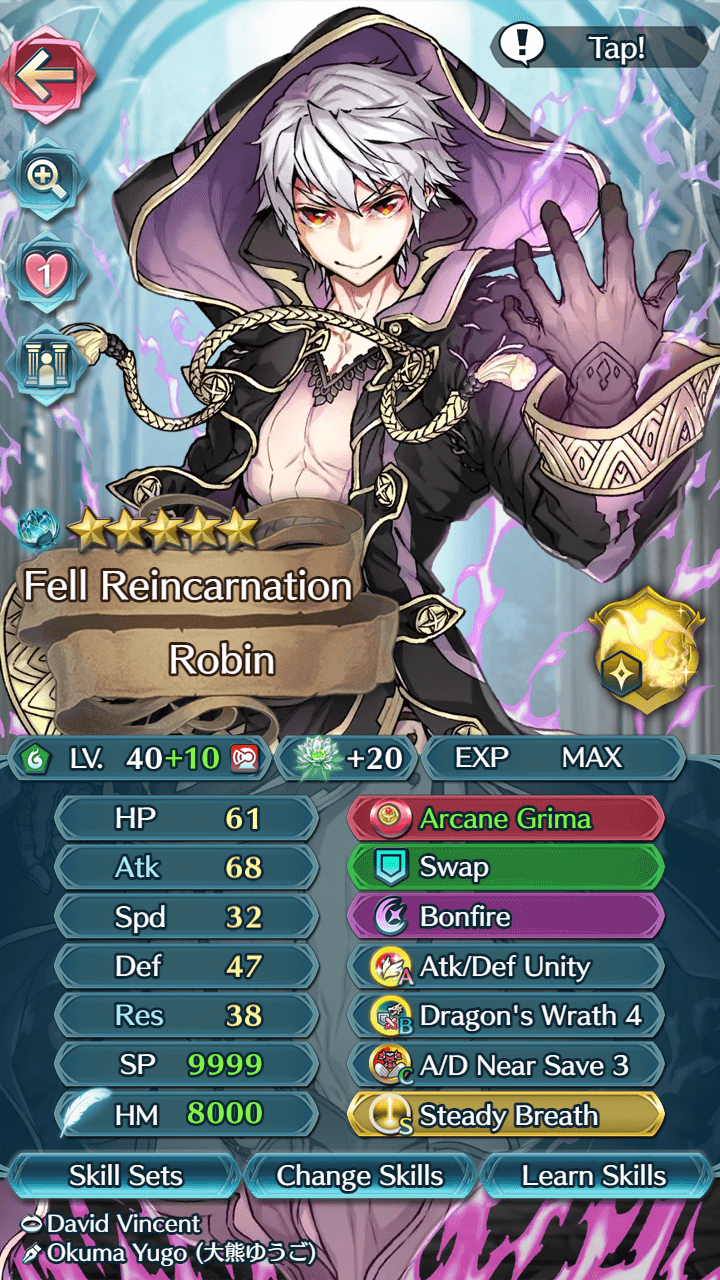 After receiving what's considered by the community at large as an underwhelming refined weapon, the Fell Dragon is ready to bite back with significantly improved Special options while maintaining stats and an appropriately namesaked weapon! 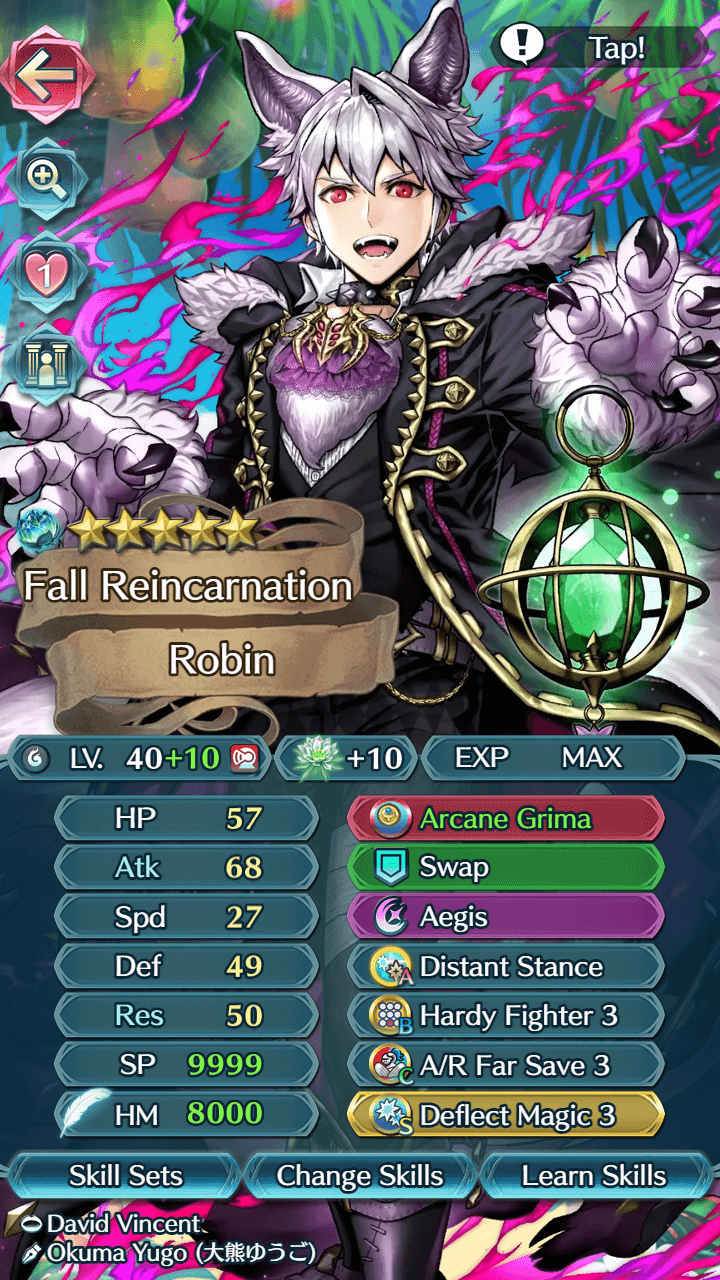 If for some reason you wanted to run Halloween Grima as a Far Savior, this is the build. Notably, Arcane Grima is a MUST with Hardy Fighter as Moonstrike Breath's readied Special healing rewards damaging Specials only. Fortunately, you can grab both from the same source.

Infantry Dragons are fortunately and unfortunately a more diverse in terms of potential inheritees. They are particularly known for their wider variety of different stat spreads, PRF-holding statuses, and many, MANY exclusive skills available to infantry/dragons in the pool so far, especially access to Null Follow-Up, Bulwarks, Finish skills, Time's Pulse, and certain Special acceleration Seals.

The various effects of Arcane Grima — especially its Slaying effect for superior Special retaliation options and guaranteed follow-up to overcome reliance on Quick Riposte — is in some situations enough to pass up existing unique Breaths as well. It also helps that quite a few of them are largely generic units as well (or, for some, might as well be).

Infantry dragons come in a few flavors that mix and match: 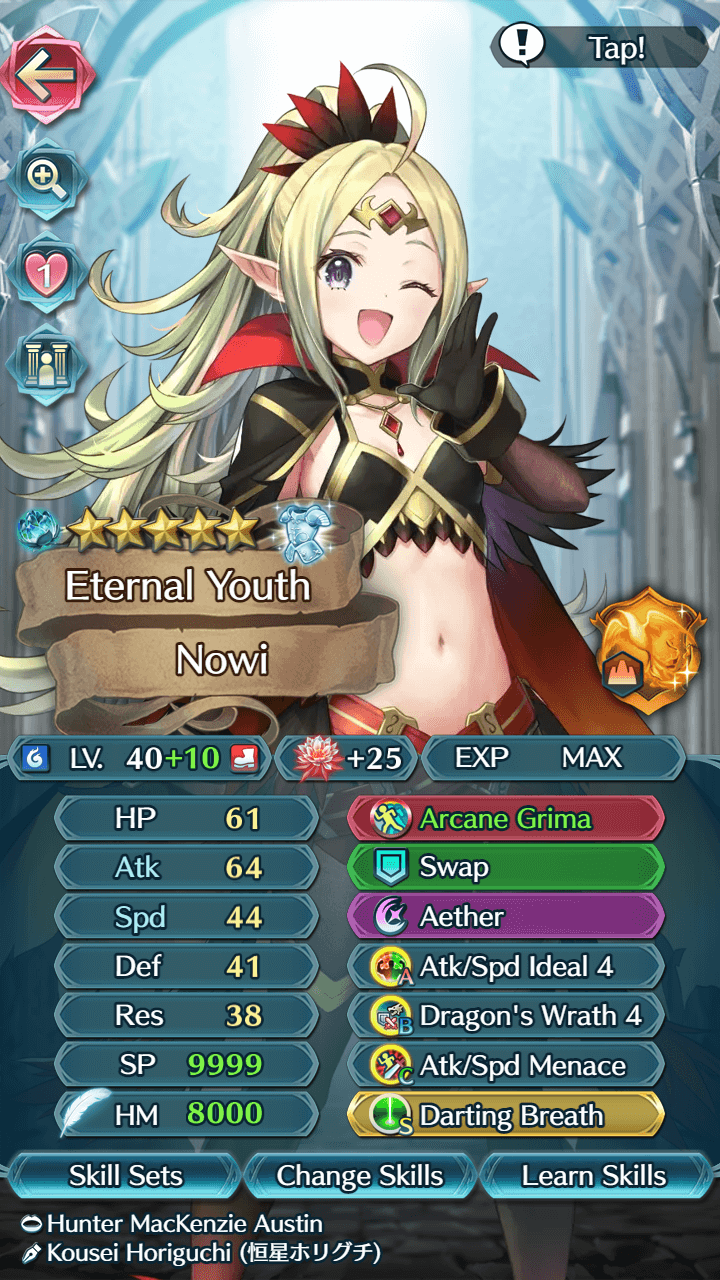 With Speed investment and the forced follow-up from Arcane Grima, Nowi should have little specific enemies that prevent her follow-up. If you want to sweeten the deal, Null Follow-Up can be used, but the combat boosts from Dragon's Wrath 4 are usually more evident. 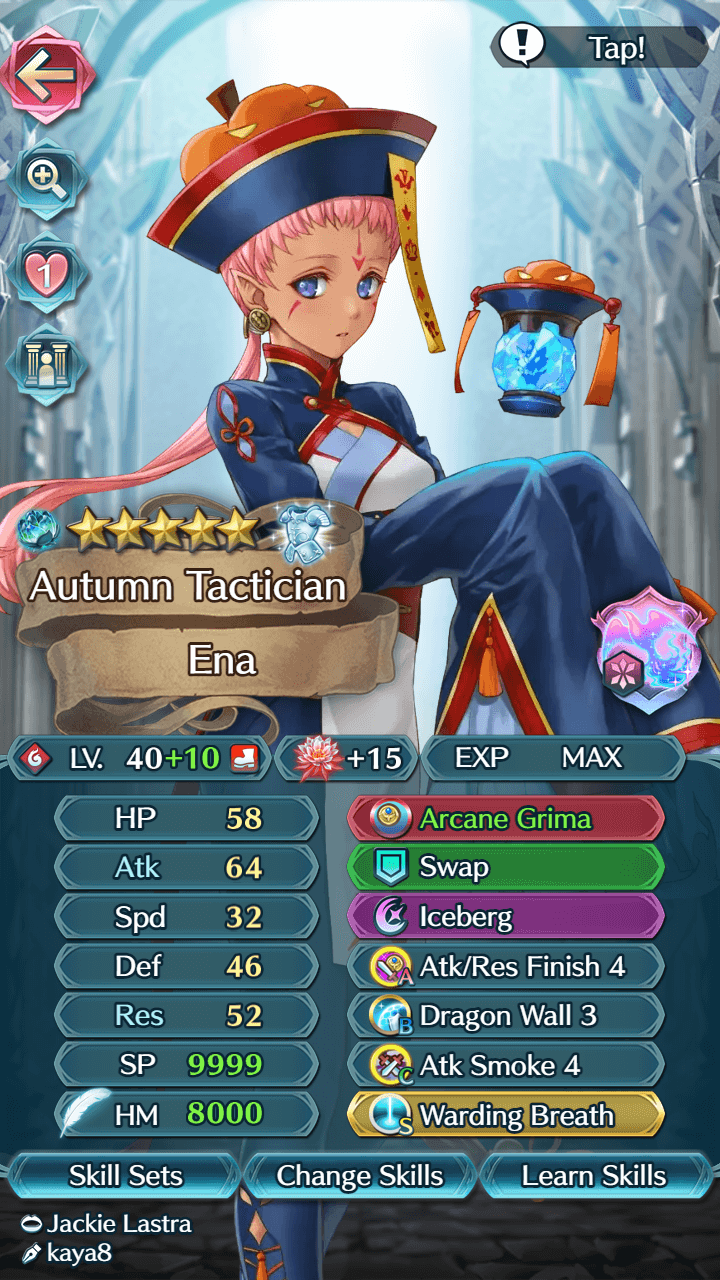 The combination of the healing from both Finish and Arcane Grima, as well as damage reduction and overall bulk from Dragon Wall and high Resistance stacking, makes Ena stay around for a long, long while. 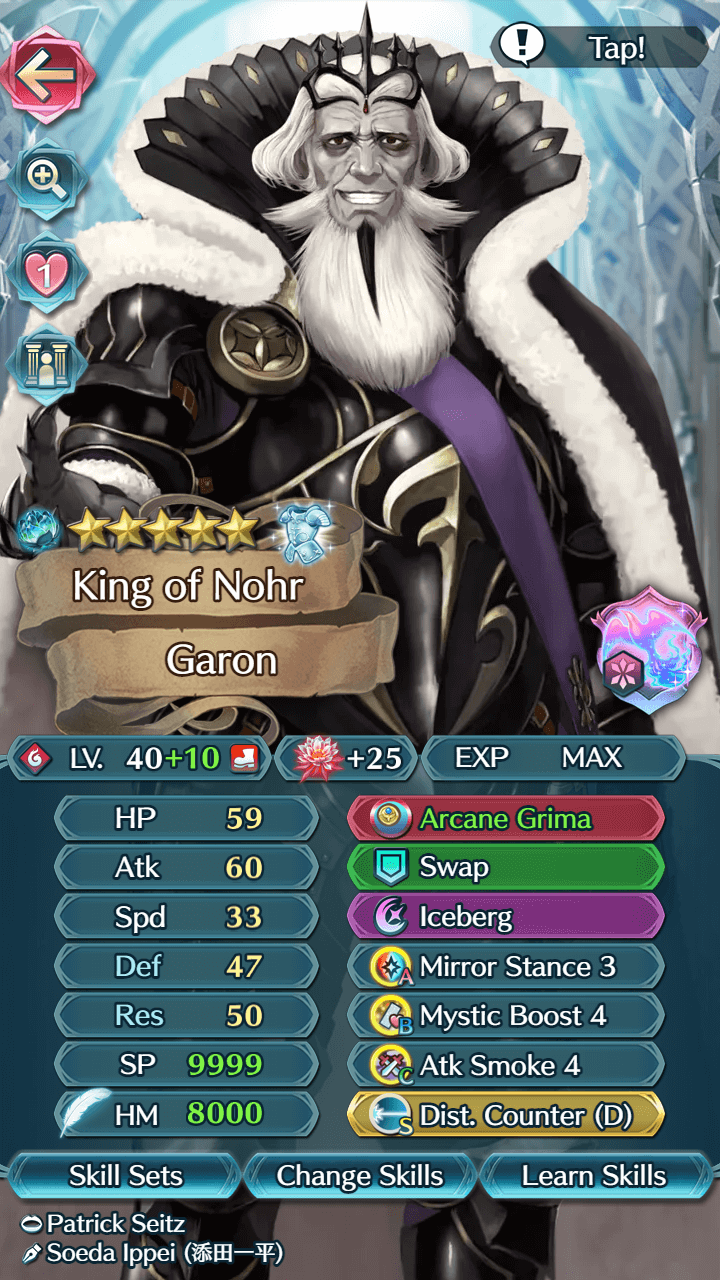 Arcane Grima gives Garon improved follow-up options -- something that his Breath of Blight, unfortunately, did not provide at all. You do pass up dragon effectiveness cancellation and out-of-combat damaging, but those are arguably either givens for other dragons or entirely skippable, 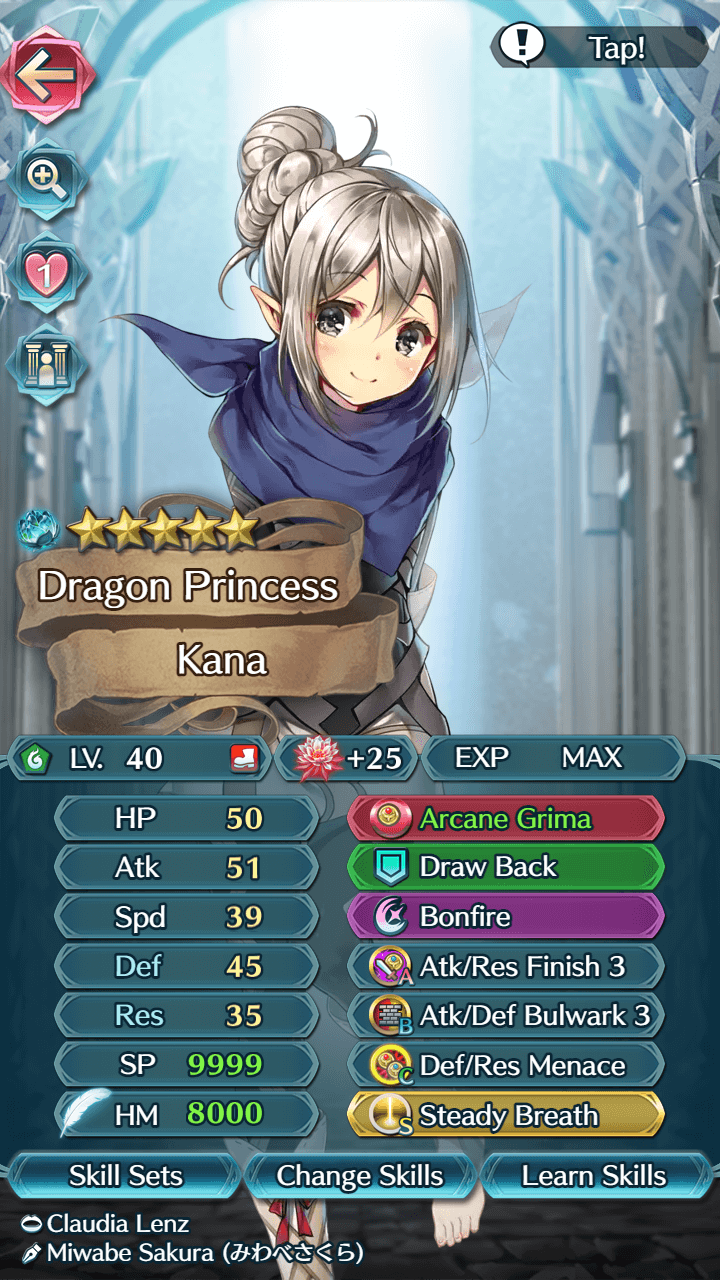 Healing and extra damage from three sources -- Arcane Grima, Atk/Res Finish, and Bulwark -- are things only infantry units like Kana can achieve and stay around very long for. 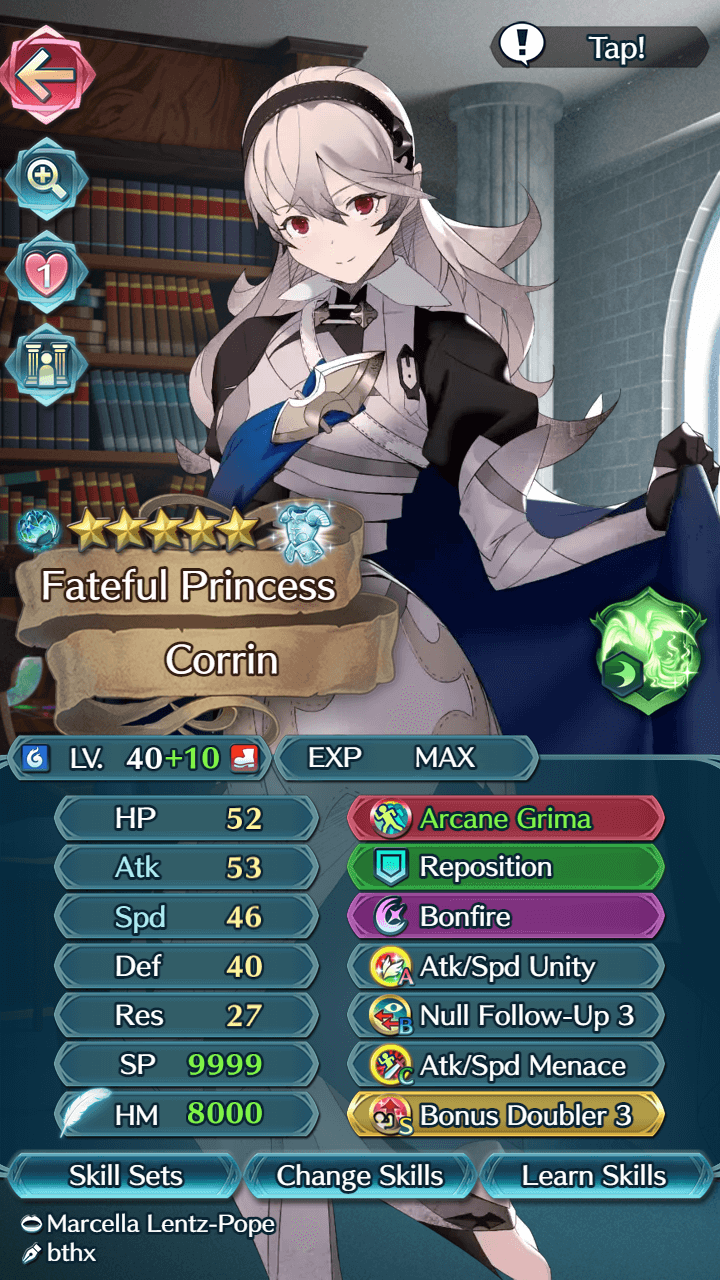 Corrin's refinery is now considered a bit underwhelming by a few dedicated users, so the cookie cutter Null Follow-Up duelist build works well in conjunction with the added combat benefits of Arcane Grima.

Flier and Cavalry dragons at this time of writing are far less numerous than the other movement types covered, making the pool of candidates actually a bit narrow. Also, they are typically pretty premium units themselves — meaning many of them have existing PRFs weapons or passives they would rather not pass up (See: basically ALL the cavalry dragons, Naga, the original Legendary Grima, Halloween Sothis, etc).

That being said, we DID just have a Halloween event with our first PRF-less flying Dragon, Halloween Naga, and those having recently invested in her are in for a nice sweet treat here. For more specific miscellaneous examples, Myrrh and Múspell's lack of player phase options and largely similar spectrum stats in their existing weapons may spur interested users into using Arcane Grima. This comes despite the gross sacrifice of Domain of Flame in Múspell's case, and Myrrh's follow-up manipulation is either shut down by Null Follow-Up already on the enemy side, or can be replicated with an ally-provided form of it on Myrrh's side (such as Legendary Byleth or Fallen Lilith). 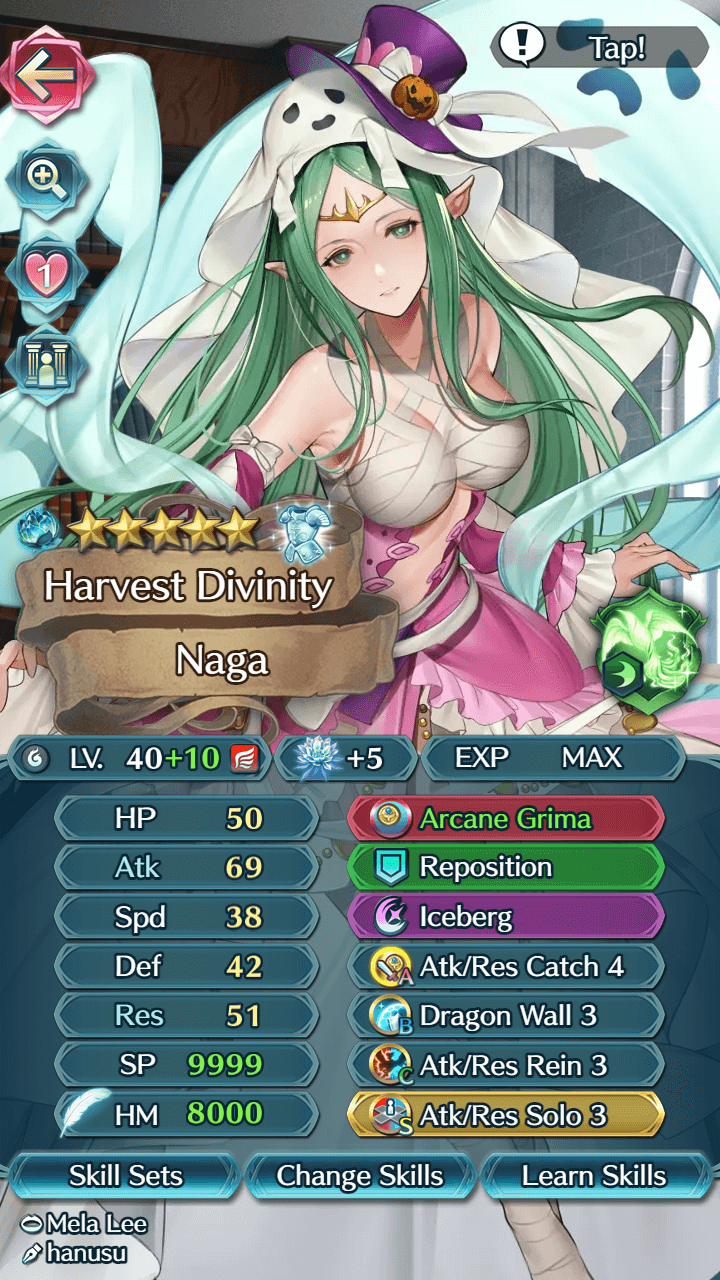 Naga is a weird one, though Arcane Grima coming right after her debut comes as a blessing. As such, a high Resistance Dragon Wall build suits her well with her newfound follow-up options. 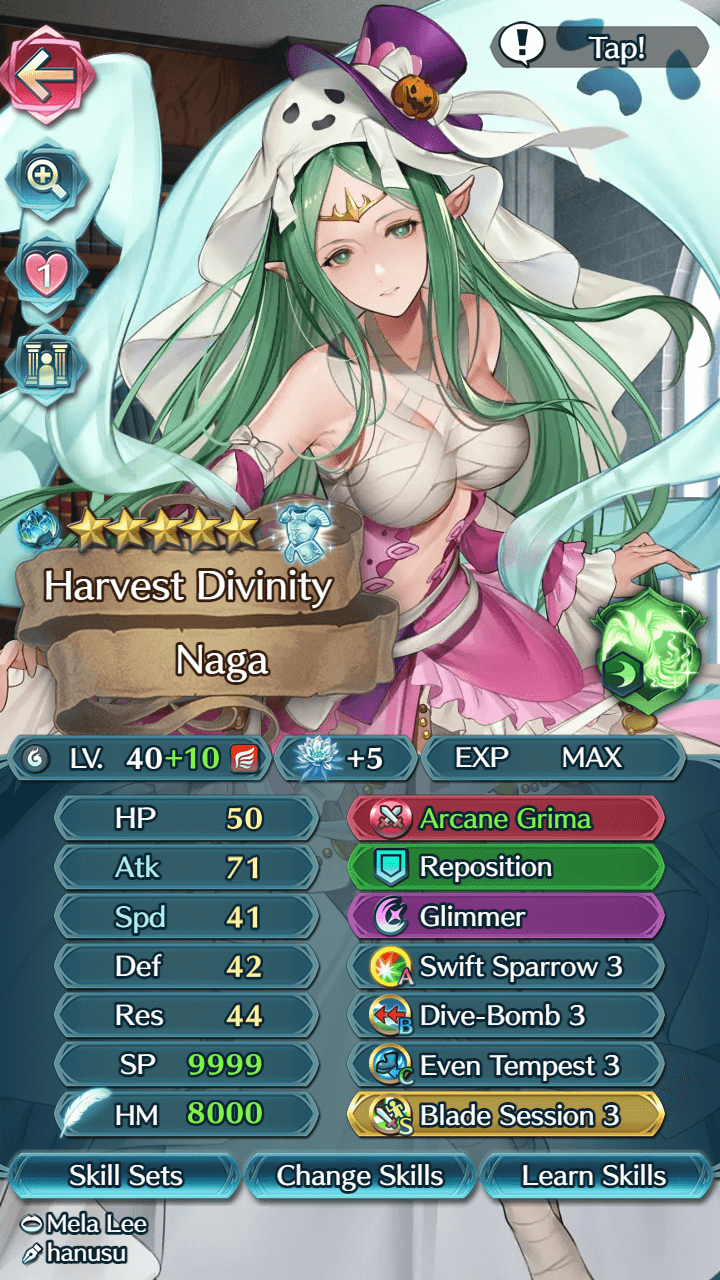 Due to the added guaranteed follow-up from Arcane Grima, a combination of additional Speed investment as Dive-Bomb should allow Naga to easily decimate most things she initiates on. 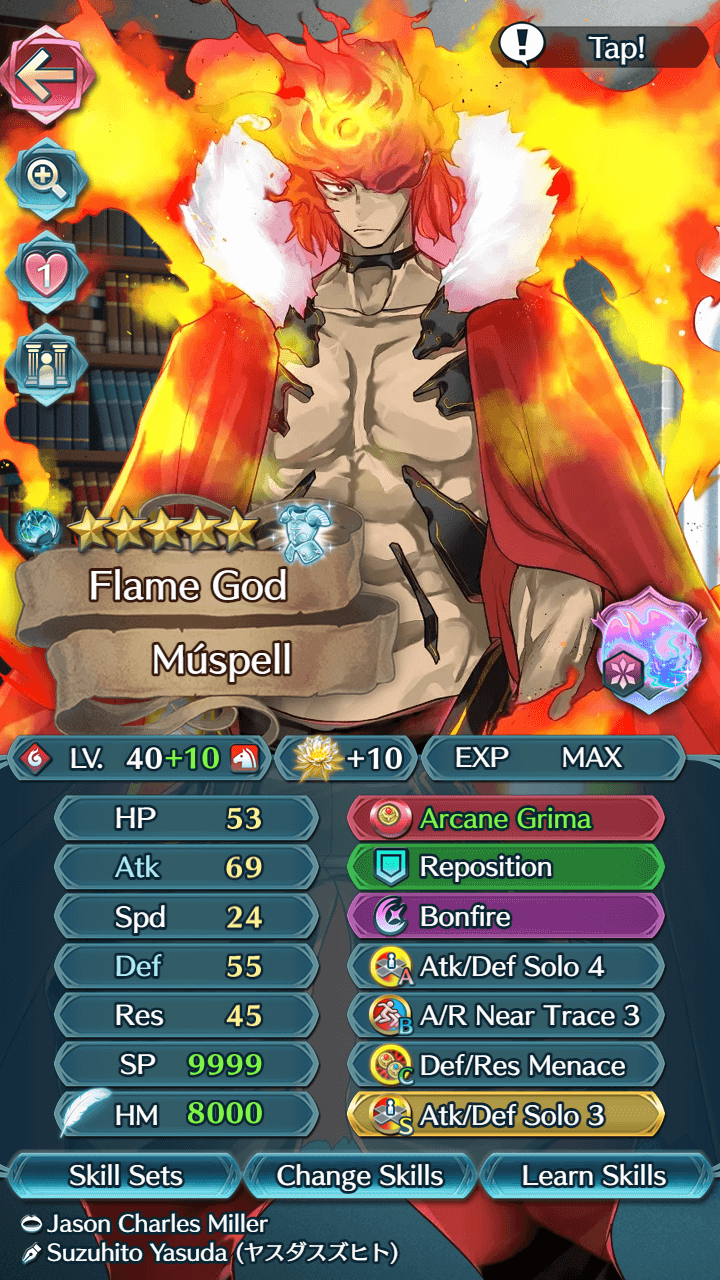 At the gross loss of Domain of Flame, Muspell is a more competent combat unit overall thanks to Arcane Grima's added follow-up and still maintaining that extra damage element with its "15% of unit's Atk" effect. As such, he can run an extremely safe hit-and-run build with reliable mixed tanking versus melee enemies. 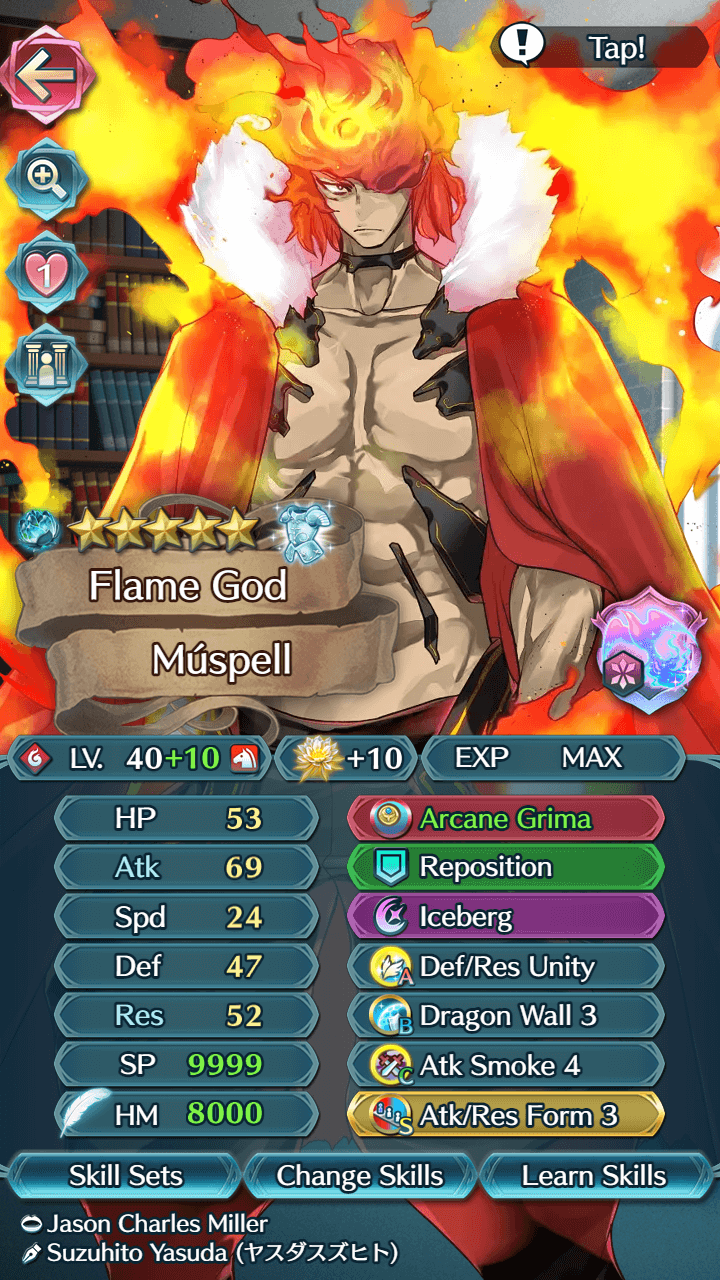 Another Dragon Wall build, but Muspell gets a pass mostly because he comes with the B slot already. 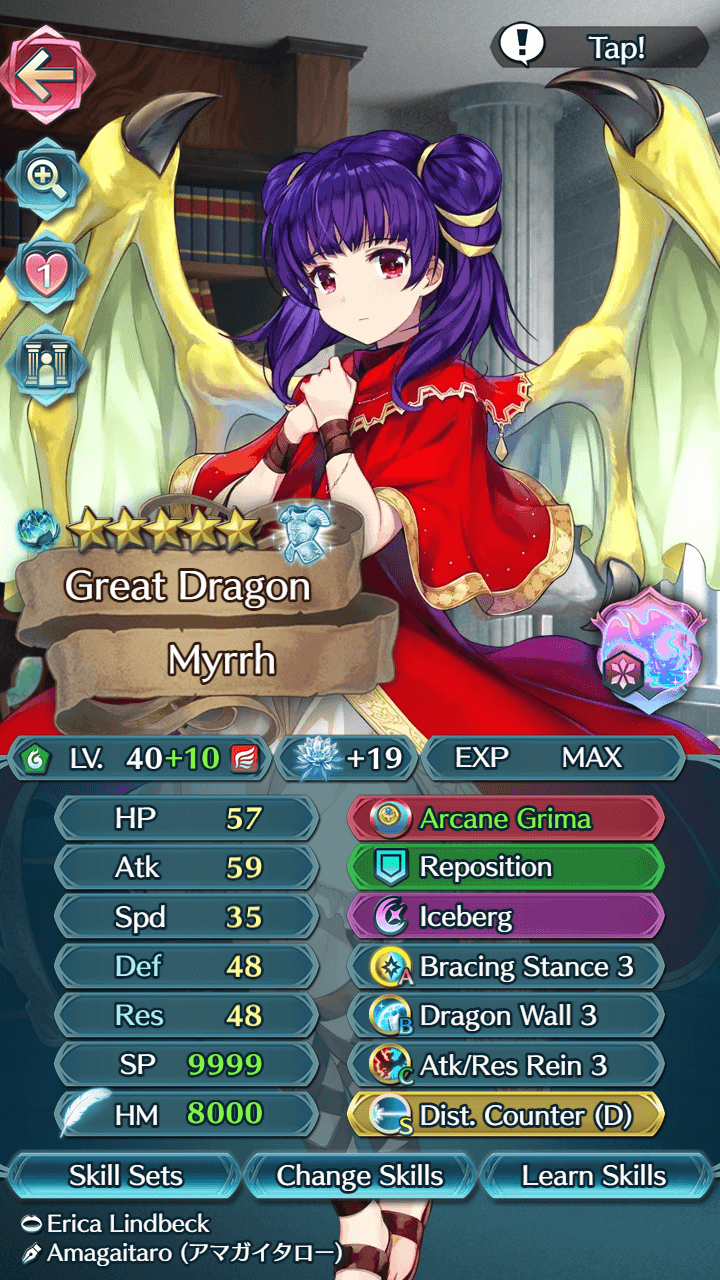 Myrrh's PRF is actually largely pretty great, but if you didn't want to spend 200 Dew or want more follow-up options, this is the build.