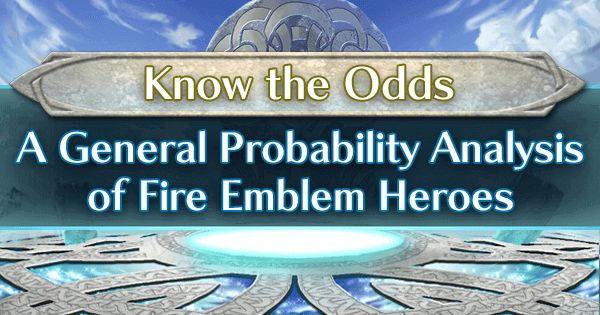 On the 3rd Anniversary FEH Channel, the game announced that all banners will now have a 4-star focus unit. In this article, we will examine the impact of this change in terms of orb expenditure and probability.

Summoning System: What to know

The following is an excerpt from the original General Probability Analysis. Players are highly recommended to read the article in full before proceeding.

While there is no confirmation of how the summoning system works in FEH, below is the general consensus of how the units are generated when you press the summon button:

Units are divided into different pools by star rating, as publicized in the Summoning Rates page.

The most important detail is the 4th step, whereby the summoning circle will show the colors of the units. This gives additional information to the player, which allows them to have some element of control in their summoning sessions. A red orb will always produce a red unit, so on and so forth. This means that a player has some level of control over the units that they will get.

Let’s say for instance that we take a 3 unit standard focus banner with no color sharing, with the probability of getting a focus unit at 3%. With the above method, if a player has no information on the heroes summoned, they will have an equal chance of obtaining each of the focus (1%). However, because they know the color of the available heroes, the player can choose to only summon in that particular color as much as possible, which eliminates the probability of receiving other focus units from the pool.

This does not mean that the odds of getting a particular unit will be the same base rate. For the above example, even if the player eliminates the other focus units by only rolling for one particular color, it does not mean that the probability of the focus unit will remain at 3%, as the number of available units in each color will be different, which results in a different distribution overall.

Another mechanic in Fire Emblem Heroes is the pity system, whereby the base rates will be altered according to the number of consecutive rolls that a player does not receive a 5-star (I will define this as “pity streak”). Every time the pity streak increases by 5, the 5-star rate will increase by 0.5% that is distributed between focus and non-focus, and conversely, 4-star and 3-star rates will drop by the same proportional amount.

As mentioned in the previous section, the actual probability of obtaining the unit is not the probability stated at the front, but rather the conditional probability when the color is already fixed. For the case of the 4-star focus, this is extremely beneficial. This is because the actual possibilities of the summoning result after the colors are fixed are much smaller than the full pool of possible units. This essentially concentrates the probability in a smaller group, which effectively increases the odds.

Let us assume that we have a 4 unit focus banner, with 1 of the 4 units being a 4-star focus. We also assume that the color of each focus unit is unique (meaning 1 of each color). Lastly, the non-focus pool distribution follows the Valentines 2020 Lovely Gifts banner. The color of the 4-star focus is changed accordingly to obtain the following result in 1 decimal place:

The above probability is largely attributed by having 3% of the focus on a single unit. For reference, the highest possible base rate before this change was a 2-unit focus banner with a base rate of 1.5%.

The effect of the increase in the mathematical probability can be seen in the simulations, with the 4-star focus orb expenditure for both single pulls and fully merged consistently lower than the standard focus.

The effect of the 4-star focus addition is generally a beneficial change with little to no drawbacks; the rate of pulling the 4-star focus in the banner is noticeably higher than their 5-star counterpart, be it in the single summons or pulling for merges. This trend persists in the simulation, where the expenditure is consistently lower as well.

Cordelia Question
@Kmac92 wrote: It’s about time I start building her. Catria…
Since I'm not seeing a topic about it... I knew he would show up, but thought he'd take longer
@Dannwond wrote: (topic withdrawn by author, will be…
Went ahead and pulled. Got Leif. Now what?
@SafCar wrote: +Atk -Res. Got him off the Greil’s Devoted…
Alright..... Bet...... my first Sturdy Impact fodder..... and someone who could use it well
@GVader wrote: The fact they came together is just ment to…
I have sinned (also Cordelia flex)
@Guts wrote: I started building Cordelia after she got her…
Read More