The Pros and Cons of Offensive A Skills 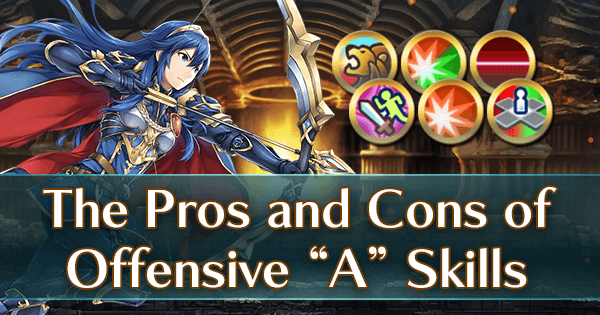 In Fire Emblem Heroes, a unit’s A skill typically affects their raw stats or accelerates their Special charge rates, though there are some exceptions like Distant Counter and Triangle Adept. For offensive units, the stat-boosting A skills are usually ideal to directly enhance their combat capabilities, especially because they can access accelerated Specials with their Sacred Seal via the Heavy/Flashing Blade Seal. The most common and effective A skills used for this purpose include Fury, Swift Sparrow, Life and Death, Brazen Atk/Spd, and Death Blow. The purpose of this article is to highlight the pros and cons of each A skill in order to help make a decision amongst them for a particular unit.

The ever-popular Fury skill is quite widely used, and for good reason: it’s one of the most accessible A skills on a budget due to being available on Hinata, who can be summoned at a 3-4 star rarity. It’s also an excellent skill all-around due to directly boosting all of a unit’s stats. The 6 post-combat recoil damage is generally not a huge penalty in most cases, since most maps in Fire Emblem Heroes don’t last particularly long. However, there are several modes where the same unit will need to survive multiple maps (such as Tempest Trials and Chain Challenges), which can result in Fury’s post-combat recoil damage being a severe hindrance due to that unit’s sustain being significantly limited.

However, the recoil damage can be used to one’s advantage; there are a number of skills that require a particular HP threshold to activate, such as Wrath and Desperation activating when a unit is at or below 75% of their maximum HP. In these cases, Fury’s recoil damage can actually be quite handy as it can make it easier for a unit to enter that threshold.

While Fury grants +3 to all stats (except HP), it gives less overall offensive stats than the alternatives. Fury is the best choice for units that need the extra bulk, such as offensive units who are otherwise in danger of getting KO’d in a single attack; this makes it exceptionally good for units that utilize the skill Desperation. Blade tome mages are a particularly good example of this. It’s also one of the best options for budget considerations. Note that because Fury only costs 200 SP to learn, it is generally suboptimal for Arena scoring purposes.

Swift Sparrow is quite a bit rarer than Fury; while it’s available on a staggering number of units (10 at the time of writing), every single one of those units is locked at 5 star rarity. This means that it is significantly harder to obtain as well as being a bigger investment to inherit onto another unit.

Swift Sparrow is the best choice for units that are entirely Player Phase oriented, such as quad attackers (with Brave weapons), or for units that don’t need the extra defensive stats from Fury and want to squeeze a tiny bit more offensive stats out of their A skill.

Note that Swift Sparrow costs 240 SP to learn, so it is a good choice to use for Arena scoring; only 300 SP skills are worth more, assuming that the extra SP is enough to push the unit into a higher SP bin.

Life and Death is another A skill that has decent availability; it can be obtained from Sothe at 4 stars as well as from Hana at 5 stars. It grants more offensive stats than both Fury and Swift Sparrow at the cost of inflicting a -5 penalty on Defense and Resistance. This defensive penalty is very significant; a lot of units that would otherwise be able to survive a single hit from most enemies can no longer do so should they run Life and Death.

Finally, one of the best ways to circumvent the defensive penalty is to simply prevent the unit from getting attacked at all; Firesweep weapons allow a unit to attack freely on their turn without having to worry about counterattacks.

Note that because Life and Death only costs 200 SP to learn, it is generally suboptimal to use for Arena scoring purposes.

Brazen Atk/Spd offers a whopping +7 to both Attack and Speed, surpassing all of the previously mentioned offensive A skills. However, it comes with a major caveat of requiring the unit to be at 80% HP or lower. This means that for a unit with more than 80% HP (such as when starting a map at 100% HP), their A skill is non-functional.

Brazen Atk/Spd not functioning above 80% HP is a major problem since it poses a severe detriment on a unit’s capabilities due to essentially not having an A skill. This is best circumvented by utilizing Ardent Sacrifice or Reciprocal Aid to safely reduce the unit’s HP in order to prevent them from being forced into combat without their A skill active. Brazen Atk/Spd works best in multi-map modes like Tempest Trials and Chain Challenges since the unit’s reduced HP will stay consistent across multiple maps. This allows them to stay in lower HP thresholds, such as Desperation.

The best users of Brazen Atk/Spd are the ones who already need their HP dropped in order to excel. For example, Lyn’s refined Sol Katti activates both Desperation and Brash Assault once she drops below 75% HP; since she needs to be within that HP threshold anyway, a Brazen skill like Brazen Atk/Spd is a strong, synergistic choice. Other examples include heavily offensive attackers with poor defenses like Bridal Cordelia or Raven with a refined Basilikos. Staff users can also be a good choice due to Brazen Atk/Spd being one of the few strong offensive A skills they can actually use.

Note that Brazen Atk/Spd costs 240 SP to learn, so it is a good choice to use for Arena scoring; only 300 SP skills are worth more, assuming that the extra SP is enough to push the unit into a higher SP bin.

As a direct upgrade over Death Blow 3, Death Blow 4 is exceptionally powerful for offensive units that put full emphasis on raw damage. Death Blow 3 is perfectly usable, and is much more accessible than Death Blow 4; the former is available on Klein, who can be summoned at 3-4 star rarity, while the latter is exclusive to Brave Celica, a 5-star exclusive unit.

The main difference between Death Blow and the other aforementioned A skills is that it grants no bonus to the user’s Speed. This means that the best users are those who can guarantee doubles, whether it’s with a Brave-type weapon like Reinhardt, Cherche, or Elincia, or via a skill like Ephraim with refined Siegmund or any armored unit using Bold Fighter.

Death Blow 4’s whopping +8 bonus to Attack makes it the single biggest boost to a single stat amongst all other skills. Since it only works on initiation, it’s a fantastic choice for purely Player Phase units, particularly if they can make use of the Heavy Blade Seal. Note that Death Blow 3 only costs 200 SP to learn, making it suboptimal for scoring, while Death Blow 4 costs 300 SP, making it tied with Distant Counter for the best non-exclusive A skill to use for Arena scoring.

Atk/Spd Solo is an incredible skill - it grants more offensive stats than Life and Death without the defensive stat reduction, though it does have a positioning requirement. However, the positioning requirement is rather easy to meet; in comparison to a skill like Atk/Spd Bond, Atk/Spd Solo is much easier to keep active due to most offensive units pushing ahead of the rest of the team in order to initiate combat (Solo skills also grant more stats than Bond skills: +6/+6 vs. +5/+5).

This makes Atk/Spd Solo easily one of the best A skill options for the vast majority of units. It’s particularly useful on cavalry units, whose high mobility generally results in them being far away from their team during combat. Legendary Eirika (who has this in her base kit) and Walhart are particularly good users of this skill due to their unique weapons incentivizing them to stay away from their team for combat. Brave (specifically those that can push for quads, as otherwise Death Blow 4 is generally a better option for just two hits) and Firesweep weapon users are also fantastic users due to their Player Phase focus.

The primary reasons for not using Atk/Spd Solo on offensive units are availability, player preference/playstyle, and Arena scoring. At the time of writing, Atk/Spd Solo is only available on Legendary Eirika, making it one of the hardest skills to obtain. Player preference/playstyle is an important factor; while maintaining a lack of adjacency isn’t particularly hard for most offensive units (particularly when accounting for support skills like Drive and Tactic buffs), it might be contrary to one’s playstyle. In this case, a different A skill would be a better bet. Finally, Atk/Spd Solo costs 240 SP; this makes it better than Death Blow 3, Life and Death, and Fury in terms of Arena scoring, but worse than Death Blow 4.

When in doubt, Fury is always a safe bet (particularly since it's one of the most accessible of all the skills) due to granting additional defensive stats in addition to offensive stats; it's best suited to units that can make use of the additional bulk (such as offensive glass cannon-type units like Blade mages with Desperation).

Swift Sparrow and Death Blow are the other safe options, as their main downside is only functioning on Player Phase (which is generally not a huge issue for offensive units who tend to excel on Player Phase). Death Blow should be utilized to maximize raw damage output, making it ideal for units with Brave weapons or who can otherwise ensure doubles, while Swift Sparrow is best on Player Phase units that can make good use of the additional Speed through doubling.

Life and Death and Brazen Atk/Spd are the more aggressive options for offensive A skills, as they both carry significant downsides in exchange for more offensive stats. They are best utilized by units who have reliable methods of circumventing their downsides (such as dropping their own HP with an Assist skill like Ardent Sacrifice or Reciprocal Aid to enter Desperation's HP threshold), as otherwise, those downsides can severely hamper unit performance.

Atk/Spd Solo is generally one of the best A skills for most offensive units due to a combination of granting nearly the most stats while having a relatively lenient activation condition. Generally, the main reasons to not run Atk/Spd Solo are due to availability, player preference/playstyle, and Arena scoring.

While offensive A skills generally aren't build-defining, they are a vitally important supplement in maximizing a unit's combat potential. It's essential to pick the right A skill, whether it's to improve upon a unit's strengths, mitigate weaknesses, or a combination of both.