'Sup, guys. Been a while, eh? It's been two weeks since my last unit suggestion, Walhart. Sorry for the absence, to anybody who cared, but my computer's been out of commission as I try to fix a corrupted external hard drive. I've also been distracted by FEWarriors. ButmI'm back now, with three requests that were made back on my Walhart idea. First and foremost, we have Hardin, at the request of user "Yuelia." Later will be Gharnef and Astram, both on request as well.

[WEAPON]: Gladius (Lance, unique)
Might: 16. At the start of every third turn, unit recovers 10 HP.
[SUPPORT]:
[ACTIVE]: Pavise
Reduces damage inflicted by attacks from adjacent foes by 50%.
[A]:
[B]: Sable
Every fifth turn, damage from combat is negated. (Skill cannot be inherited.)
[C]: Fortify Armor
Grants adjacent armored allies Def/Res+6 through their next actions at the start of each turn.

Hardin was a bit tricky. Looking at his abilities from the original games, that I never played, it was a challenge drafting up abilities that matched what made him unique without making him too overpowered. Namely, the Darkstone, which I have called "Sable" here, for simplicity's sake.

Ability Reasoning:
Gladius
A more appropriate translation of the name of the spear "Gradivus." I didn't want to give him the same spear that Camus wields, as the Distant Counter would be unfair on Hardin the way I drafted him. So instead, I opted for giving him what is technically the same weapon, but with a different name and the ability it grants in the game he wields it (or at least in New Mystery of the Emblem). Namely, it can be used to recover all HP. Keeping it reasonable, Renewal.

Pavise
I intended Hardin to be a tank's tank. Because of this, and my limit on two self-made skills per unit, I opted for Pavise, the go-to of tanks everywhere.

Sable
This one was a bitch.
During the fight with Hardin in book 2 of New/Mystery of the Emblem, he wields two uniques items. The first is the Gradivus/Gladius lance, which I addressed above. The second, is the Darkstone, called Sable here. It negates damage. Naturally, I couldn't add this as-is. So I added a limited to its effect of every five turns. I also specified that it negated damage from combat, so outside damage such as Pain or Poison Strike still damages him. I think that should be enough to keep it somewhat fair and counterable.

Fortify Armor
As an armored unit, I opted to give him an ability that supported other Armored units. 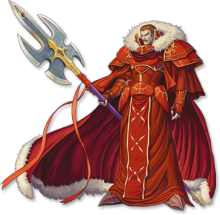 Asked by TheEternalShade3 years 9 months ago
Report
Sign in to Answer or Ask a Question!

Yeah, there isn't a lot of variety on that front, is there?

I drafted Kjelle as an offensive Armored unit about a month back. Also a Lance-user.
https://fireemblem.gamepress.gg/q-a/unit-suggestion-kjelle-fair-fighter

Gatrie from radiant dawn was kind of fast. Also tauroneo, but he's a veteran.